How to unblock Netflix (unblocked in just 14 clicks!)

Need to unblock Netflix fast? We reveal how to get Netflix unblocked with a VPN in just 14 clicks and the best VPNs for Netflix.
Aimee O'Driscoll 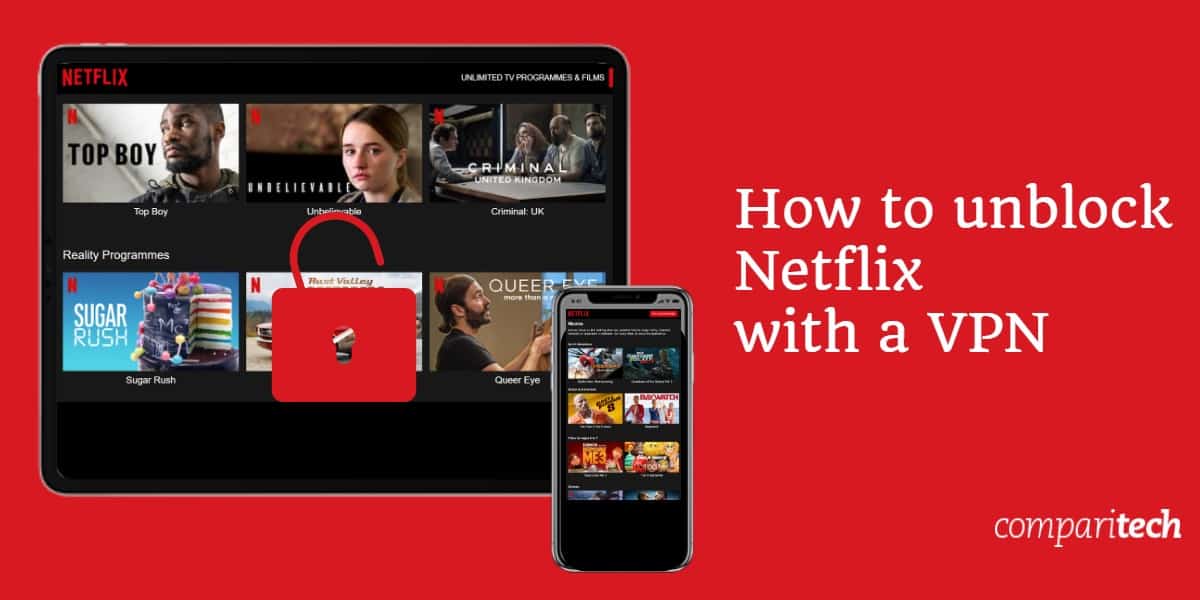 Due to licensing restrictions, Netflix shows you a different library of content depending on where you’re located. It doesn’t matter where you set up your account; Netflix will determine your current location based on your IP address and show you the library for that region. To unblock Netflix libraries from other regions, you’ll need to change your IP address.

This is where a Virtual Private Network (VPN) comes in. A VPN encrypts all of the internet traffic flowing to and from your device and tunnels it through a secondary VPN server. You get to choose the location of that server and are assigned a corresponding IP address. Netflix determines your location based on the new IP address and allows you to access the content for that region.

Using this method, you can unblock Netflix US, Netflix UK, and other catalogs. Below, we’ll show you exactly how to do this in the fewest number of steps and reveal the best VPNs for the job.

How to unblock Netflix with a VPN in just 14 clicks

Using a VPN is very straightforward. Follow the steps below to get Netflix unblocked on your desktop or laptop computer:

Here’s how to unblock Netflix from anywhere (in just 14 clicks!):

For mobile devices, the process is similar but instead of running an installation wizard, you’ll just be downloading and installing an app.

If you run into issues, the solution may be as simple as clearing your cache and cookies and reloading the page. In some cases, you may need to choose a different server, in which case your VPN’s provider’s support team can help. They should also be able to walk you through any other problems you may have.

Can I unblock Netflix from anywhere?

Yes! Using the steps above, you can unblock certain Netflix libraries from anywhere in the world. Most Netflix VPNs help you unblock Netflix US. Others can access the UK library. A few can unlock several other international Netflix catalogs.

We’ll describe the best Netflix VPNs in detail below, but here is a quick rundown of our top picks.

Best VPNs to get Netflix Unblocked:

Although our main selection criterion is that a VPN works well with Netflix, there are other factors we consider when choosing our favorite providers:

Here’s our list of the best VPNs to get Netflix unblocked:

ExpressVPN is our number one choice to unblock Netflix. Its incredible speeds make for a seamless streaming experience and connections are as reliable as they come. ExpressVPN always has servers available that unblock Netflix US and UK, along with a handful of other libraries. It does change servers used to unblock Netflix from time to time, but a quick message to the 24/7 live chat support team will have you up and running within minutes.

Aside from Netflix, ExpressVPN unblocks Hulu, Amazon Prime Video, BBC iPlayer, and many other streaming sites. This provider has apps for Linux, macOS, Windows, iOS, Android, and Amazon Fire TV, all of which have Netflix apps.

You can connect up to five devices at a time. ExpressVPN can also be installed on a home router which counts as one device. Plans include a MediaStreamer smart DNS proxy. Although this doesn’t encrypt your connection, it can help you get Netflix unblocked on devices that don’t have native VPN apps, including some smart TVs and gaming consoles.

BEST VPN FOR NETFLIX:ExpressVPN is our top pick for Netflix. It’s fast, reliable and unblocks multiple Netflix libraries with ease. A 30-day money-back guarantee makes it a risk-free option.

NordVPN is a solid budget alternative for unblocking Netflix. It can access multiple catalogs including Netflix US and UK. If you select a location for which it can’t unblock the corresponding Netflix library, you’ll be automatically redirected to Netflix US. So essentially, every server will enable you to watch Netflix. NordVPN has decent speeds for HD streaming and comes with a low monthly price tag.

Don’t just want Netflix unblocked? NordVPN can bypass restrictions put in place by plenty of other platforms, including Hulu, BBC iPlayer, and Amazon Prime Video. This provider has apps for macOS, Windows, Linux, iOS, and Android, and the VPN is configurable with some home routers. You can connect up to six devices at a time on one account.

BEST BUDGET NETFLIX VPN:NordVPN is our recommended budget alternative. Even with a low price tag, it has an expansive server network and every server works with zzNetflix. Plans include a 30-day money-back guarantee.

Check out our in-depth review of NordVPN.

CyberGhost is another hot contender for a top Netflix VPN. It boasts fast speeds and will unblock Netflix quickly and easily. Within the app, servers are clearly labeled so you always know which one to select for your use case. You’ll find specific Netflix servers, as well as those for Amazon Prime Video, Hulu, and other sites.

CyberGhost has desktop clients for Linux, macOS, and Windows, and mobile apps for iOS and Android. It can be manually configured with select home routers. You can connect up to seven devices at a time under a single subscription.

FAST AND RELIABLE:CyberGhost is a speedy yet sturdy VPN that unblocks Netflix and is great for beginners. The company offers a generous 45-day money-back guarantee.

Dive into our full CyberGhost review.

IPVanish is a popular VPN that’s ideal for browsing, streaming, and downloading. It provides access to Netflix and several other sites and delivers exceptional speeds for streaming HD video. Only select servers work with Netflix, so check the IPVanish site or hop on a live chat if you have any issues. IPVanish is particularly popular with torrent users and Kodi users and has a remote control-friendly app that can be directly downloaded to Android-based devices.

This service is compatible with macOS, Windows, iOS, Fire TV, and Android. You can install the app manually on Linux and select routers. IPVanish allows you to connect up to 10 devices at any given time.

10 CONNECTIONS:IPVanish has a generous device limit and will help you seamlessly unblock  Netflix. Plans include a 7-day money-back guarantee.

Learn more from our full review of IPVanish.

Hotspot Shield is another provider that offers an incredibly fast VPN connection. It is adept at unblocking and will help you get Netflix unblocked in no time. Other sites you can access include BBC iPlayer, Hulu, and Amazon Prime Video. During testing, all the US servers we tried worked with Netflix, but if you run into issues, live chat support will be able to help.

Hotspot Shield has mobile apps for iOS and Android, and desktop clients for Windows, macOS, and Linux. It has recently added support for select routers. Up to five simultaneous connections are permitted.

LOW PRICE:Hotspot Shield is a high-performance VPN with a surprisingly low price tag. You can get your money back within 45 days if you’re not satisfied.

Surfshark is newer than the other VPNs on this list, but it’s establishing itself as a speedy, reliable provider with great unblocking abilities. It unblocks multiple Netflix libraries, and similar to NordVPN, it will default to the US catalog if it can’t unblock Netflix for a particular location. Surfshark will also help you access Amazon Prime Video, Hulu, BBC iPlayer, and more.

A huge perk of purchasing a plan with this provider is that it doesn’t impose a connection limit. You can use the VPN on as many devices as you like. Apps are available for Windows, macOS, Linux, iOS, and Android. You can configure the VPN with select routers.

PrivateVPN works hard to ensure it always offers access to at least the US and UK Netflix catalogs. It runs a small network of servers but prides itself on its abilities as a streaming VPN. It can also unlock other sites such as BBC iPlayer, Amazon Prime Video, and Hulu.

Mobile apps are available for iOS and Android, and desktop clients can be downloaded for Windows and macOS. There’s support for Linux and some home routers, and you can connect up to six devices at a time.

SMALL, POWERFUL VPN:PrivateVPN may have a low number of servers, but it reliably provides fast connections and unblocks streaming sites with ease. This company offers a 30-day money-back guarantee.

Can I use a free VPN to unblock Netflix?

Free VPNs certainly seem like an attractive option. Unfortunately, they carry too many risks and limitations for us to recommend them.

First, free VPNs likely won’t be able to help you get Netflix unblocked. They simply don’t have the resources needed to stay one step ahead of the streaming giant. And if you’re looking for customer support, you’ll be hard pushed to find it.

Even if you do manage to access your favorite shows, you’ll face another set of hurdles. You might have to join a queue to connect to a server, and free VPNs tend to have slow, unreliable connections. Plus, with low data caps, you may only get halfway through a stream before you’ve reached your limit.

Free services aren’t a good idea from a privacy and security standpoint either. They have a reputation for tracking users, collecting user data, and selling that data to the highest bidder (usually advertisers). Some free VPNs have been found to use weak encryption (or none at all), while a few have even been found to install malware on users’ systems.

As you can see, it makes far more sense to pay a small fee for excellent service and peace of mind.

These days, Netflix produces a lot of its own content, giving the service free rein to offer content worldwide without restrictions. However, most of the content that Netflix airs is licensed. When it purchases rights to broadcast shows and movies, those rights are usually region-specific. This is why you’ll find that Netflix US, for example, has a different catalog of shows compared to Netflix UK.

The library that Netflix shows you will depend on your geographic location at the time of login. For example, even if your account was set up in Canada, if you log in to Netflix while in Japan, you’ll see the Japanese library. The way to change your library is to use a VPN, as outlined in the steps at the beginning of this article.

Netflix realizes that users employ VPNs to access content from different libraries and actively blocks VPN traffic. Only some VPNs, such as those in the list above, can bypass those blocks. Although Netflix blocks VPNs, as far as we know, there have been no reports of anyone being penalized for using a VPN to access the service.