How to Stop a DDOS Attack – Includes Essential Tools

The rise of distributed denial-of-service attacks or DDoS attacks are an existential threat to enterprises across the globe. You can be online one minute and in the flash of an eye you’re forced offline and left unable to function. Just one DDoS attack can have a devastating impact on your business.
Tim Keary Network administration expert 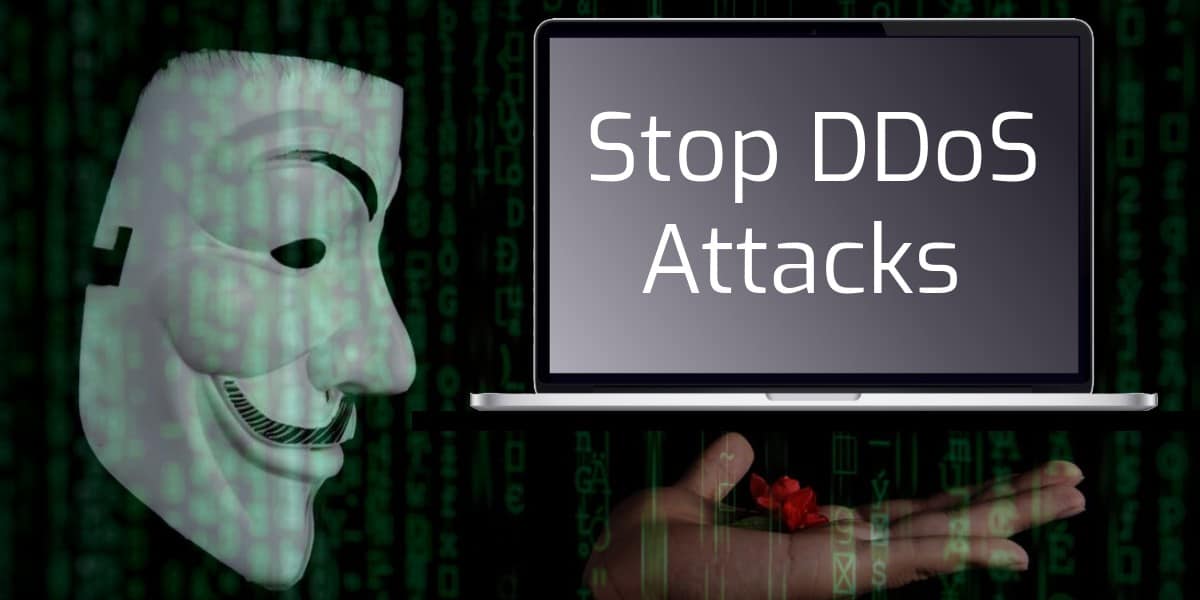 What is a DDoS attack?

A DDoS attack is a cyber attack that uses exploited computers and IoT devices to send a wave of traffic to a network. A high volume of traffic congests the network and stops legitimate devices from being able to communicate with one another. Once the network becomes too congested, users can’t access the internet.

DDoS attacks are estimated to cost between $20,000-$40,000 per hour. Taking a preemptive approach to beating DDoS attacks is essential for staying online. Before we look at how to stop a DDoS attack, we first need to outline what a DDoS attack is.

The terrifying thing about DDoS attacks is that they can happen to anyone. Even multinational organizations with dedicated cybersecurity professionals aren’t immune from being attacked.

There are countless examples of large vendors being derailed by an opportunistic attacker:

If you are here for the tools and haven’t got time to read the whole post, here is our summary list of the best tools to stop DDoS attacks:

How does a DDoS attack work?

If enough traffic is sent to the network it is put out of action. Verisign’s DDoSTrends Report found that the average peak DDoS attack size is 11.2 Gbps. Given the damage that a successful attack can cause it is important for enterprises to be able to protect themselves against these attacks.

Why Do People Launch DDoS Attacks?

Unfortunately, there are many reasons why individuals and groups carry out DDoS attacks. Some attackers are motivated by putting competitors out of action whereas others are motivated by political reasons. A handful are just looking to cause trouble for the sake of it.

It isn’t uncommon for individuals to pay for cybercriminals to launch a botnet on their behalf. While there are many reasons for DDoS attacks the end result is the same; service disruption and downtime.

Ultimately, understanding why attackers launch attacks isn’t as important as knowing how to stop an attack. Well-defined cybersecurity procedures will give you a chance to defend yourself no matter who is trying to attack you, and could help you to stay up if the time comes.

Defending against DDoS attacks starts by developing awareness of the types of DDoS attacks you can encounter. Generally, DDoS attacks can be divided into three main types; volume-based attacks, protocol attacks and application-layer attacks. Each of these attacks works in a different way:

Volume-based attacks are a type of DDoS attack that relies on volume to disrupt a service. These types of attacks include packet flood attacks like UDP floods, and ICMP floods. In the event of a UDP flood attack, the attacker sends UDP packets to random ports on a computer or network. The host keeps looking for the application listening at the port but finds nothing. The end result is a congested network.

Protocol attacks are DDoS attacks that use protocols to monopolize server resources. Common protocol attacks are Ping of Death, SYN floods and smurf attacks. In the case of a SYN flood, the attacker sends spoofed SYN messages to initiate a TCP handshake with a machine without closing the connection.

Once you know what a DDoS attack is, you can start to design a strategy to prevent future attacks. An effective DDoSprevention strategy has several core components:

Defending against DDoS attacks before they take place is all about visibility. Having transparency over your log data shows you what is happening in your local environment. SolarWinds Security Event Manager delivers a real-time log management solution that shows log data in real-time so you can see unusual activity on your network. 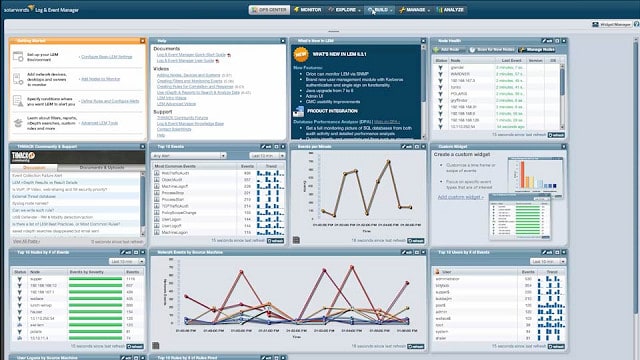 The tool also has alerts with automated responses to cut off DDoS attacks once they’ve been launched. To make sure that you aren’t vulnerable to known bad actors, SolarWinds Security Event Manager scans lists of known malicious devices and can automatically create an alert or block the IP outright.

If a DDoS attack does get through your defenses you can use root cause analysis to see where the attack originated. Root cause analysis helps you to tweak your security procedures to make sure that future attacks don’t affect your service. You can download the free trial here.

DDoS Protection Tool #2: Protecting a Website from a DDoS Attack with a WAF

A Web Application Firewall (WAF) should be at the heart of your DDoS defense strategy. A web application firewall filters and monitors HTTP traffic to find malicious activity. Once bad traffic is recognized the firewall can block it and blacklist the IPs of the machines involved. 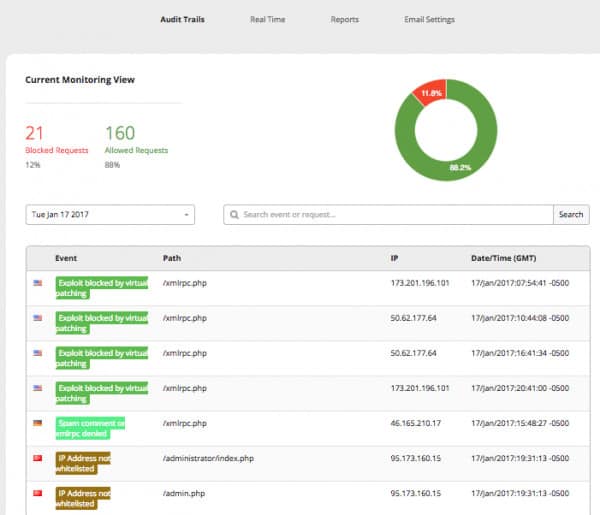 To defend against attackers Sucuri enables you to configure custom rulesets to filter out suspicious traffic and block botnets from trying to consume your bandwidth. As an added bonus, Sucuri can also block malware, zero-day attacks and brute force hacks.

The biggest risk to your network is the volume of traffic that is sent by an attacker. The amount of traffic that a Botnet can muster determines the severity of the attack. NetFlow analyzers are excellent at picking up traffic spikes that indicate an attack. 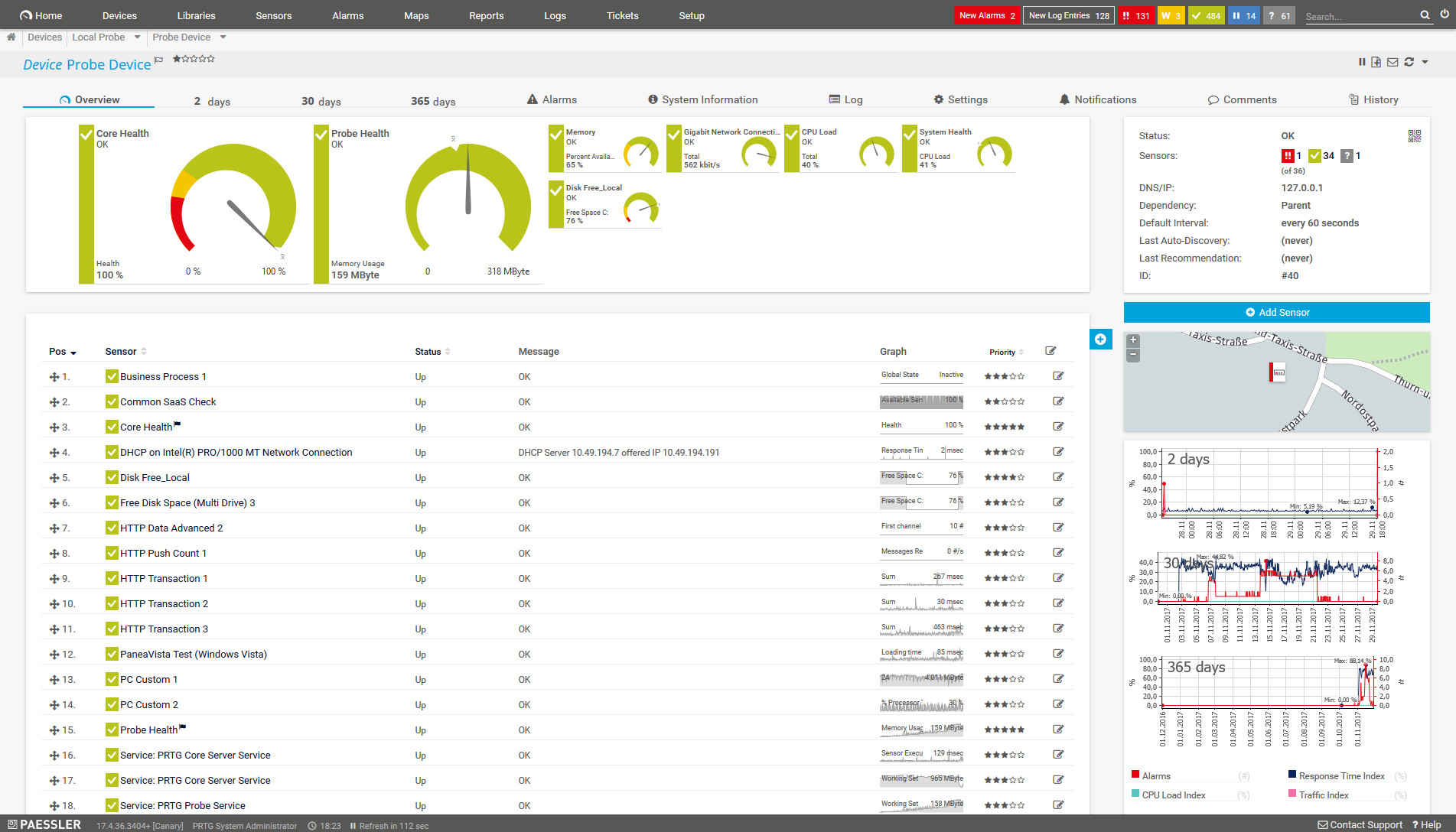 NetFlow analyzers like Paessler PRTG Network Monitor can show you fluctuations in network traffic and show you when you’re under attack. The NetFlow V5, NetFlow V9, and IPFIX Sensors can show you if malicious traffic is being sent your way. There are graphs of your live traffic data where you can look out for unusual traffic peaks.

You can even configure alert thresholds so that you are sent a notification if traffic reaches a certain level. Having transparency over network traffic helps you leap into a response as soon as an attack hits your network.

However, if you cannot afford in-house staff you can get good results by investing in a managed security provider who provides ongoing traffic monitoring and penetration testing.

Other Best Practices for Dealing with DDoS Attacks

There are a number of best practices that you can incorporate to work alongside your defense measures. These are as follows:

Overprovisioning is the practice of purchasing more server bandwidth than you need for day-to-day operations. Having a higher bandwidth capacity gives you more resistance against an attack. The reason is that the attacker needs to send a higher volume of traffic to disrupt your service. Overprovisioning can help counter some lower volume attacks.

DDoS attacks work by targeting your hosting server but if you spread your data across several global servers, there’s no single point of failure. Having no single point of failure means that you can’t be put offline by one server failure because you’ll still have other servers available to work with. A CDN is an excellent method for staying resilient against attacks.

Making sure that your network is secure from attackers is essential for avoiding an attack. To keep your network secure, you should not only be scanning your network infrastructure but also using an intrusion detection system alongside your log management solution to look for vulnerabilities.

Educating employees on the dangers of cyberattacks and how to secure network devices is paramount to preventing damage to your network. Your employees will be the people on the ground when an attack happens. Training them how to spot malware or suspicious activity and how to respond in an attack will minimize the potential damage of an attack.

Tips for Responding to a DDoS attack

Even with the best strategy in the world, you can’t prevent a DDoS attack from slipping through the net. It is vital to have a plan for how to respond once you know an attack is happening. How you respond once an attack goes live will determine how much damage is done and how long you are offline for. Here are some tips for responding to a DDoS attack:

The first thing you need for a prompt response to an attack is to educate yourself and your employees on the signs of an attack. Are devices unable to access the internet? Is there a ton of unusual traffic on the network? Being able to spot the tell-tale signs of an attack will speed up your responses. Employees can’t spring into action to address an attack if they don’t recognize an attack has taken place!

A bandwidth monitoring tool can be instrumental in looking out for large amounts of traffic on your network. You have a small window of time before your server is overwhelmed to clear server logs to help stay online.

Once the attack has passed it is time to evaluate what happened. Identify whether there were any vulnerabilities or inadequacies in your response process. Could your bandwidth monitoring tool have better visibility? Could your team’s communication be better or your response time faster? Identifying these areas for improvement is a great way to make sure that you’re prepared if you ever encounter another DDoS attack.

The Key to a Successful Defense: Prevention and Fast Responses

Prevention and fast responses are the core elements of a DDoS defense strategy. Tools like log management solutions, website firewalls or network analyzers will help you catch attacks early but they aren’t enough on their own to stop attacks from affecting your bottom line.

A large degree of your resistance to an attack will depend on how quickly your team responds under pressure. Building an employee culture that emphasizes cybersecurity and recognizes how to fight a DDoS attack will reduce the damage if an attacker slips through the net.