Necessity is the mother of invention and the new norm in remote working practices will open up new applications for the remote desktop connection system.We show you the best Remote Desktop Connection Manager tools for 2020.
Stephen Cooper

Remote desktop connection manager tools enable IT support staff to access the user environment of a desktop. This is a great aid to troubleshooting and problem resolution.

The ability to take over a user’s computer and let them watch while you demonstrate a solution is a very powerful support aide. IT professionals can demonstrate their skills and implement a solution much quicker if they can actually get their hands on a remote computer. Remote desktop systems are a lot cheaper than buying a plane ticket for the IT technician so he can go and knock on the customer’s door and sit at the computer.

Here is our list of the six best remote desktop connection manager tools:

The benefits of a remote desktop manager

Sometimes, just getting remote access to a computer is not enough. It is necessary to access the computer in the same way that the user does. It could be that everything is working fine behind the scenes but there is something wrong with the interface. Thus, a technician that just gets remote access to the operating system is never going to understand what the user is complaining about until he is able to actually access the system through the desktop.

There are many useful implementations for remote desktop access systems. Now that telecommuting has become more common due to COVID, remote desktop systems will be more vital. A standalone remote desktop system can be used by an independent support technician, offering assistance to the general public, so these systems can support the creation of small businesses and technical support startups.

A remote desktop application can also be used as a teaching aid because it can be used in reverse to show the desktop of an advisor or lecturer to a group of seminar attendees.

The market for remote desktop connection systems is well supplied and there are even some free systems that are worth consideration.

A good remote desktop management system is able to distribute agents to the remote devices so that a non-technical user can access them. It should also enable IT staff to log in through an interface to one of the business’s devices without having to use access credentials. However, the system should also maintain access security so that rogue technicians aren’t able to access any endpoint at will.

There are many factors to be taken into consideration when choosing a suitable remote desktop management suite. In order to speed up your search for the best remote desktop connection manager we have done the research for you and narrowed down the field to six excellent services. 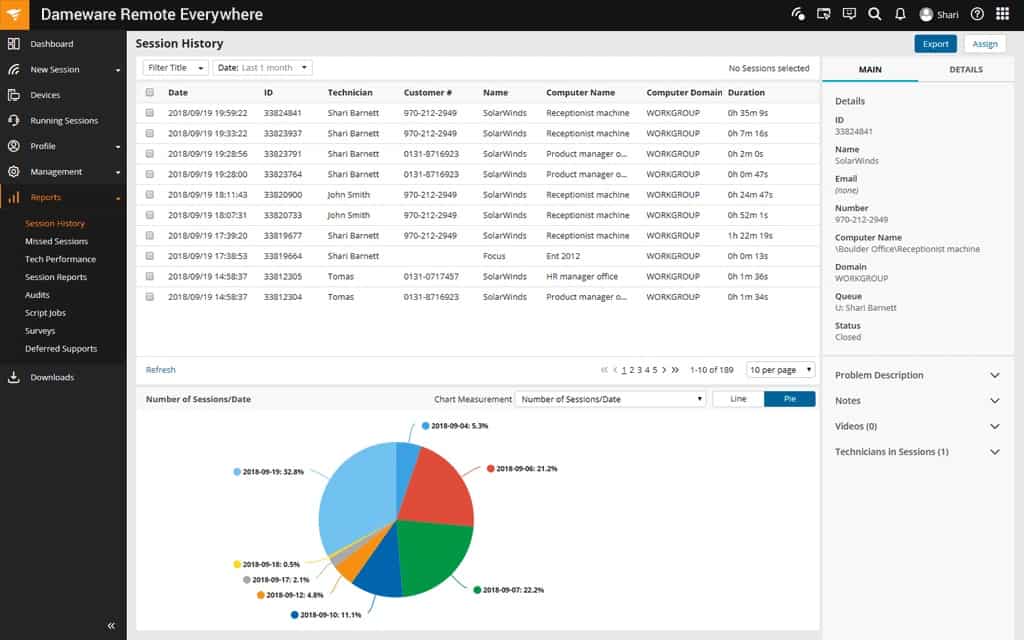 Dameware was an independent company that developed IT support tools and it was bought by SolarWinds to become SolarWinds Dameware. There are three Dameware products and each includes a remote desktop system. These tools are:

The differences between the three versions lie in the features each contains in addition to the remote desktop utility. 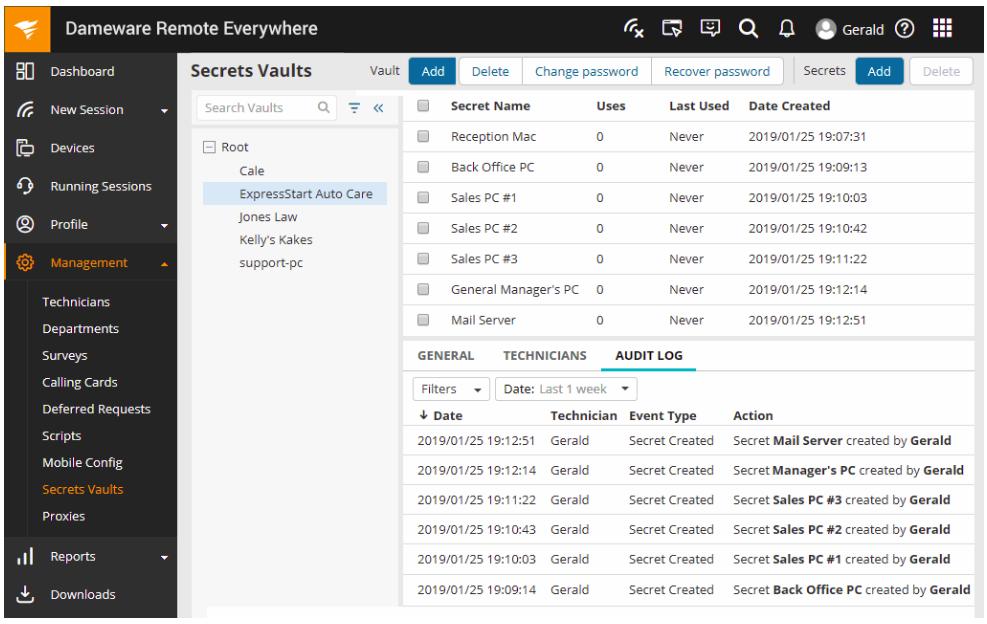 The IT professional can access the operating system or get a second desktop screen to explore the target computer without disturbing the user or while it is unattended. There is also a remote control facility to allow the user to watch the actions of the technician. The technician is also able to wake up a computer that is in standby mode.

At the beginning of a session, the Dameware service presents the technician with a summary of system information for the target device. It also facilitates access to event logs for research. It is possible to take screenshots during a connection and also record a session. The technician and the user can communicate during the session via live chat, voice, or video link. 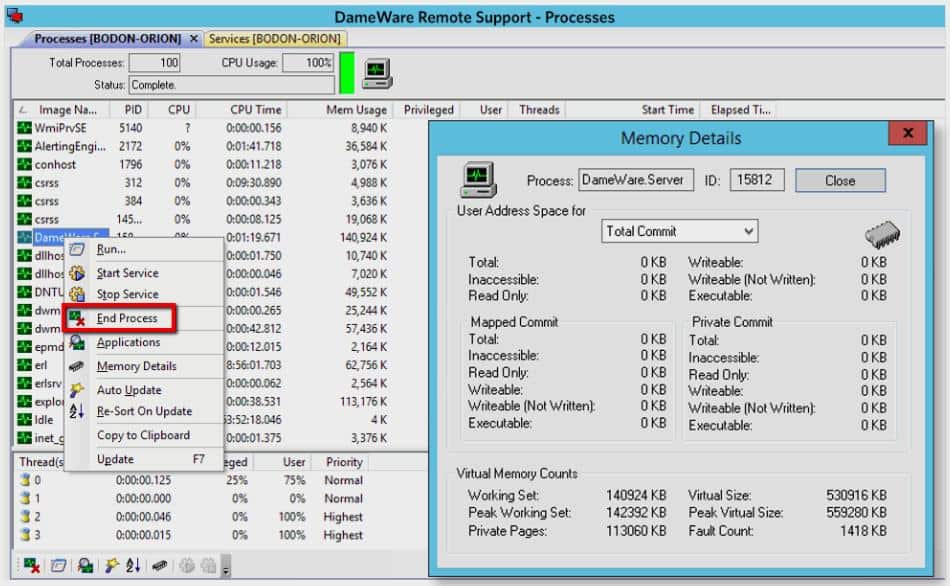 A central team management system for this version of Dameware stores access credentials for a list of managed endpoints and allows access to individual technicians with permission from the system manager. This removes the necessity to let the technician learn the passwords for those endpoints.

The software for Dameware Remote Support runs on Windows and Windows Server. The tool is available for 14-day free trial. 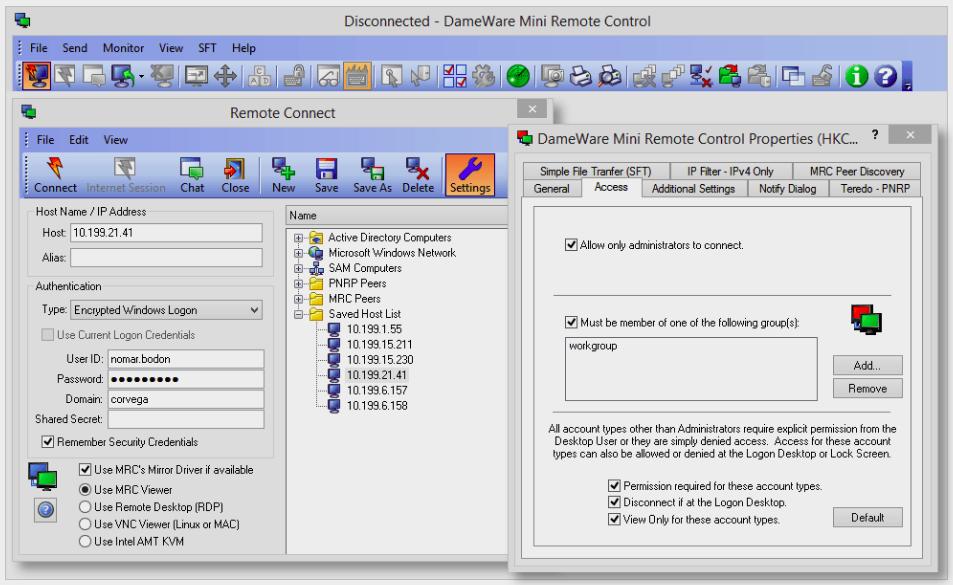 Dameware Mini Remote Control is a standalone version of Dameware Remote Support. It doesn’t include the ability to manage remote Active Directory systems and it doesn’t include a central management console.

Dameware Mini Remote Control installs on Windows and Windows Server and it is offered on a 14-day free trial.

Although the functionality of each version of Dameware is a little different, there are commonalities in all of them.

Dameware in all of its versions is our number one choice for a remote desktop manager because its different implementations offer a version that will be suitable for any situation. An IT department would probably use Dameware Remote Support and an independent support contractor would be more likely to use Dameware Mini Remote Control. Dameware Remote Everywhere would be ideal for businesses operating a virtual office. 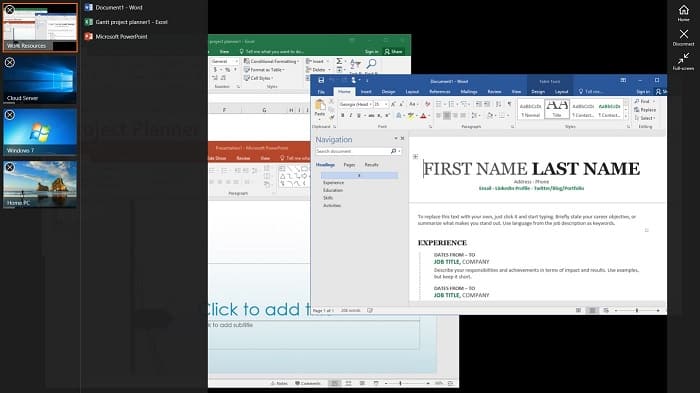 This free tool is available from Microsoft for users of Windows 10. A downside of this option is that it can only access other computers that have Windows Professional, Windows Enterprise, or Windows Server.

The Microsoft remote desktop system is able to operate through an online service called the Remote Desktop Gateway. This manages access permission from the owner of the remote computer and distributes the client agent that facilitates the connection. The system includes a communication channel by voice or video to enable the technician to engage with the supported user. 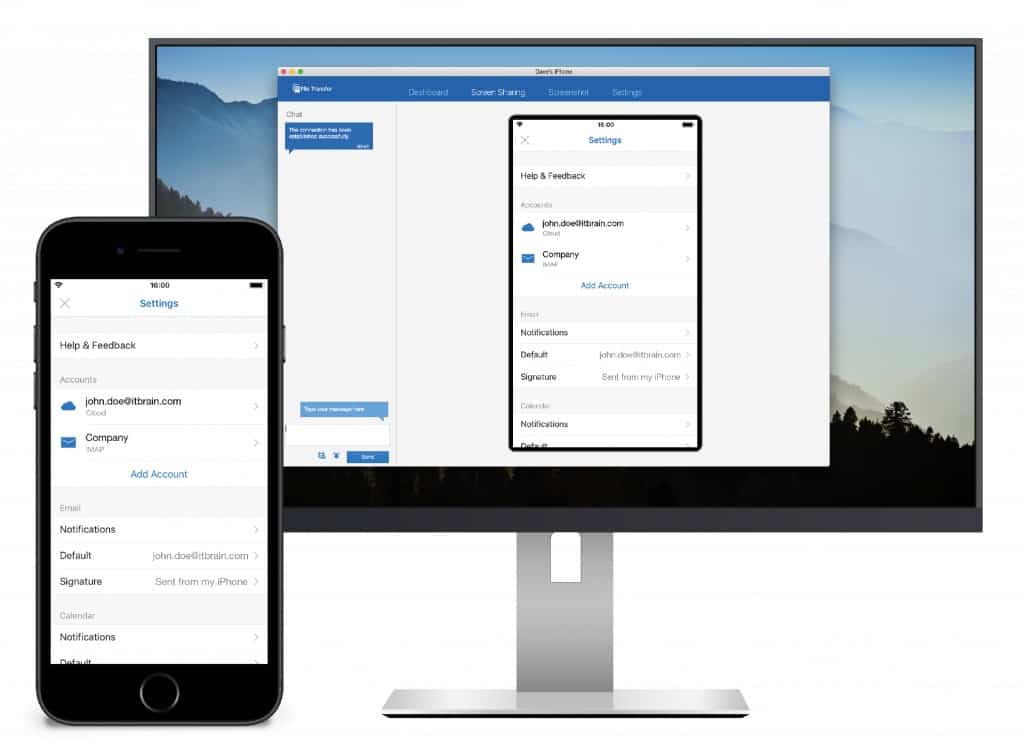 TeamViewer is a very widely used remote desktop connection system – it has been installed more than two billion times. The desktop access system is at the core of a number of different versions of TeamViewer. The base version is free for home use.

A nice feature of TeamViewer is its well-organized console. The dashboard’s main panel gives a view on the remote desktop and other panels in the service vary depending on the version that has been chosen.

TeamViewer can be used for support services, for seminars, video conferences, team collaboration, and system management.

The technician console runs on Windows, macOS, Linux, Chrome OS, Raspberry Pi, iOS, and Android. The target device can be running any of those operating systems. The remote control service is also able to access IoT devices.

The free version can be downloaded from the TeamViewer website. The paid versions start with a base package and that can be enhanced by a list of paid add-ons. 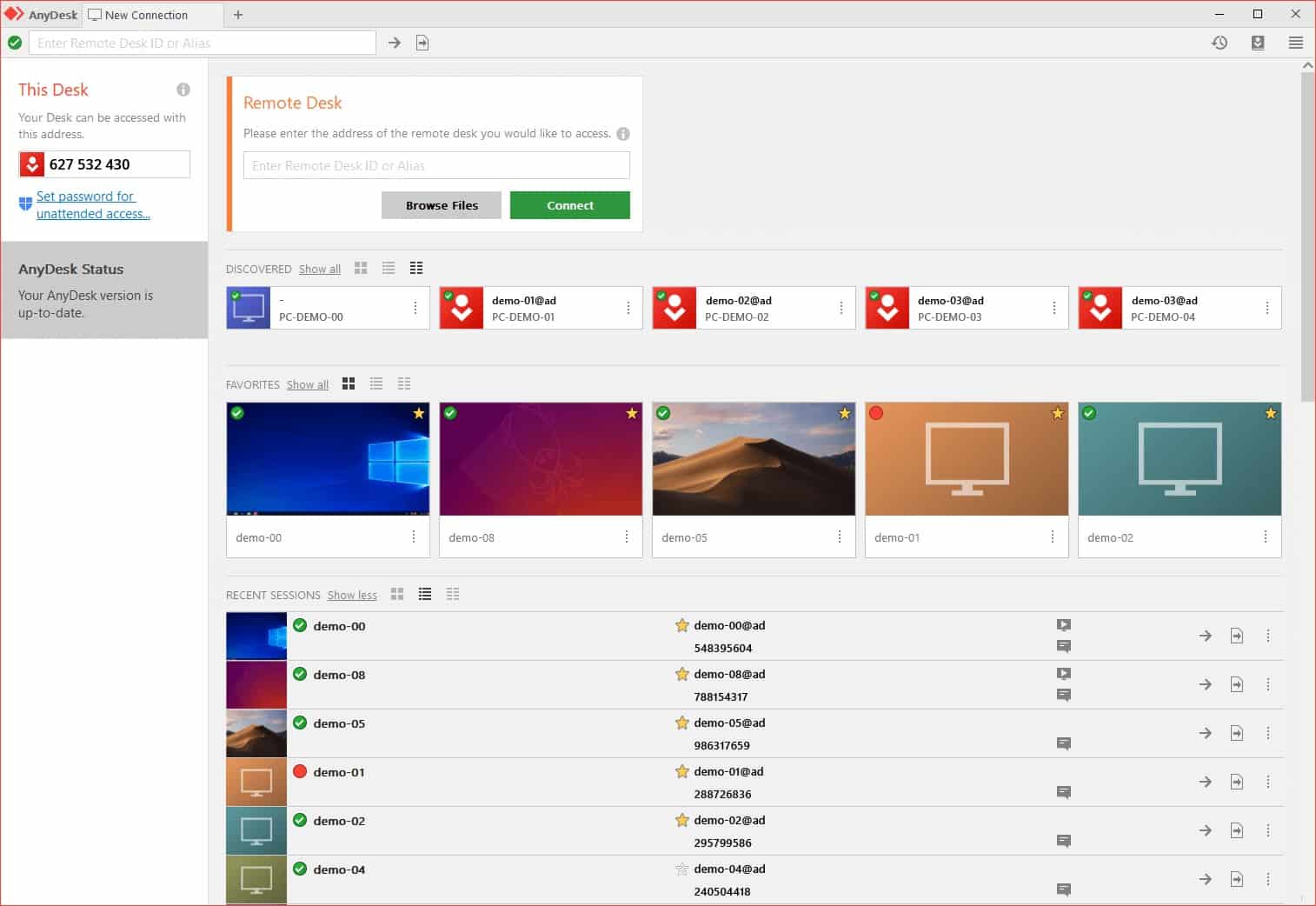 AnyDesk is available in a free version for home use. Business users have a choice of three paid versions: Lite, Professional, and Power. The service is charged for on a subscription basis per month. The Lite version is a straightforward remote desktop service that can only contact one endpoint at a time. The two higher plans can conduct multiple sessions simultaneously. The Power plan allows many devices to be operating on the account with live connections simultaneously.

The service is mediated through the AnyDesk cloud server but is accessed through a downloadable app. That app will run on Windows, macOS, Linux, Unix, Android, iOS, Chrome OS, and Raspberry Pi. The service won’t let a technician connect to any remote computer. This would make the utility a hacker tool. Rather, the owner of the target computer needs to install a client agent program and grant access to a specific server computer. Once the client agent is resident, the user can allow access to several remote accessors and revoke that permission at any time. 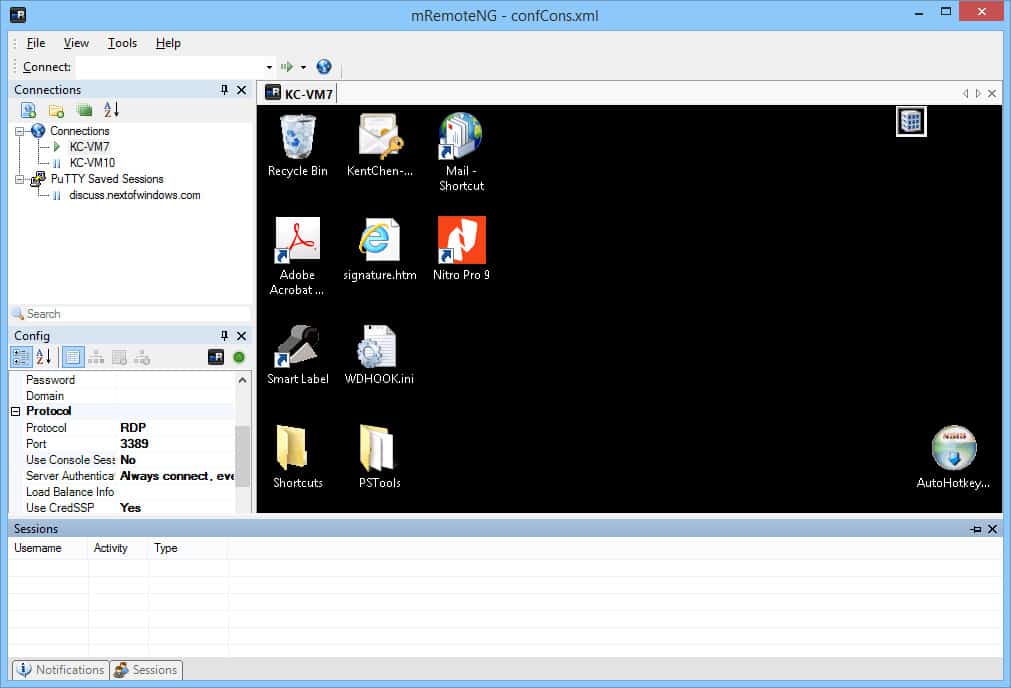 mRemoteNG is a free, open-source utility and is a lot less sophisticated than the paid tools on this list. However, those who want a free utility and aren’t impressed by fancy graphics will enjoy this remote desktop connection manager.

The technician interface is tabbed to enable access to many sessions simultaneously. Those sessions can be with different remote computers or multiple connections to the same endpoint. This connection manager supports a number of secure protocols, including RDP, SSH, and HTTPS. 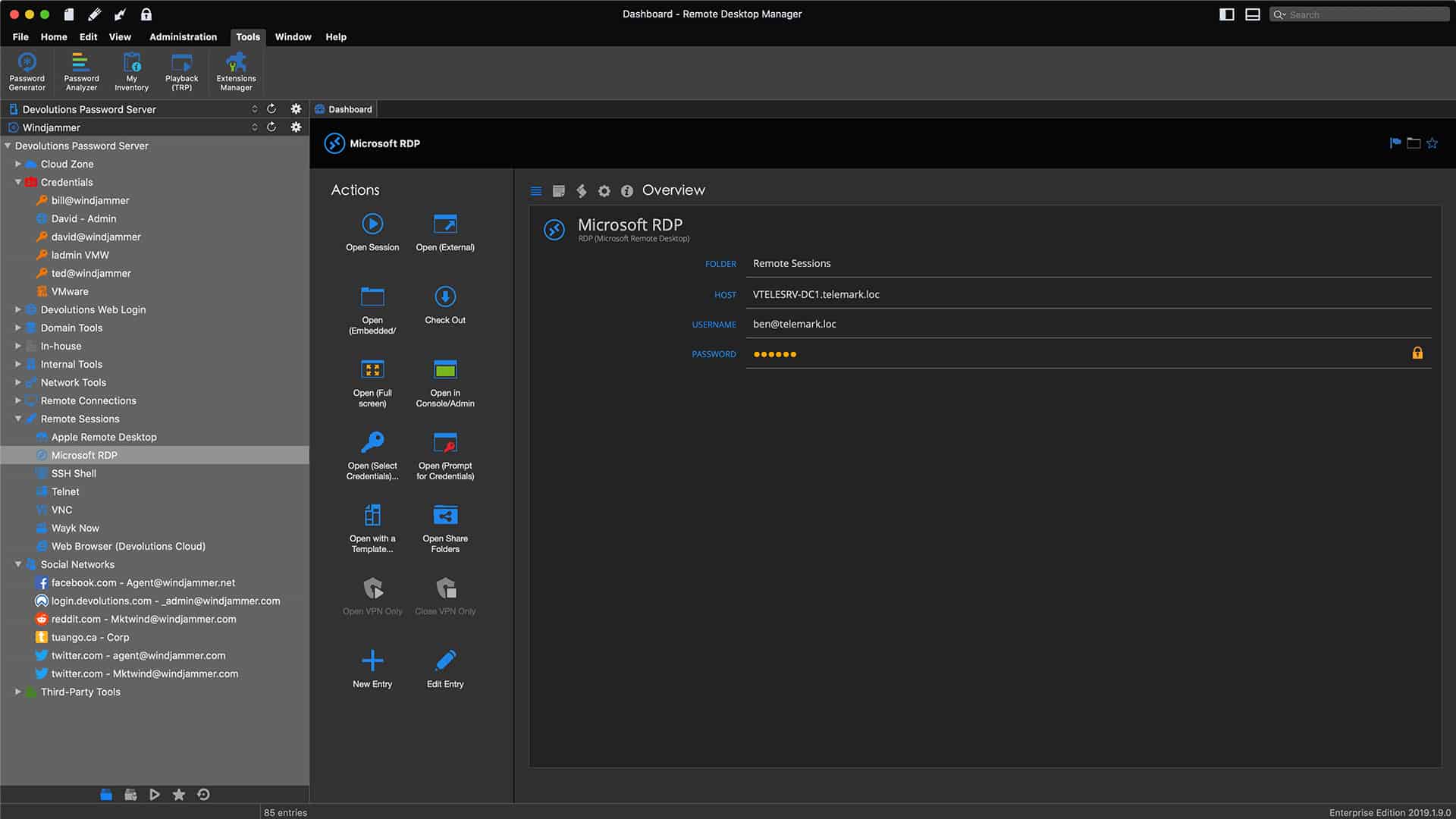 The Remote Desktop Manager is available in a free version for individuals and a paid version for teams, which is called the Enterprise Edition. There is no restriction blocking the Free Edition from being used by businesses. Both versions include password management and include connection security. The Enterprise Edition enables session sharing and also password database pooling.

The Remote Desktop Manager installs on Windows, macOS, Android, and iOS and can access any of those operating systems on devices that have a receiving agent installed on them.

The Enterprise Edition of Devolutions Remote Desktop Manager is available for a 30-day free trial.

As is clear from the descriptions of the products in this guide, not every remote desktop management tool is exactly the same. This is because there are many different needs for this technology.

Some of the tools on this list are suitable for in-house use by IT departments to maintain a fleet of devices. Other tools are very suitable for the vendors of software who need to support members of the public who buy their products. In all cases, the agent that installs on the target machine tends to be a less impressive application with fewer features, while the technician’s console is feature-rich.