How to live stream the 2019 MTV VMAs abroad for free

Want to catch all the action from the hottest video music awards show? We reveal how to live stream the MTV VMAs 2019 abroad for free from anywhere in the world.
Aimee O'Driscoll 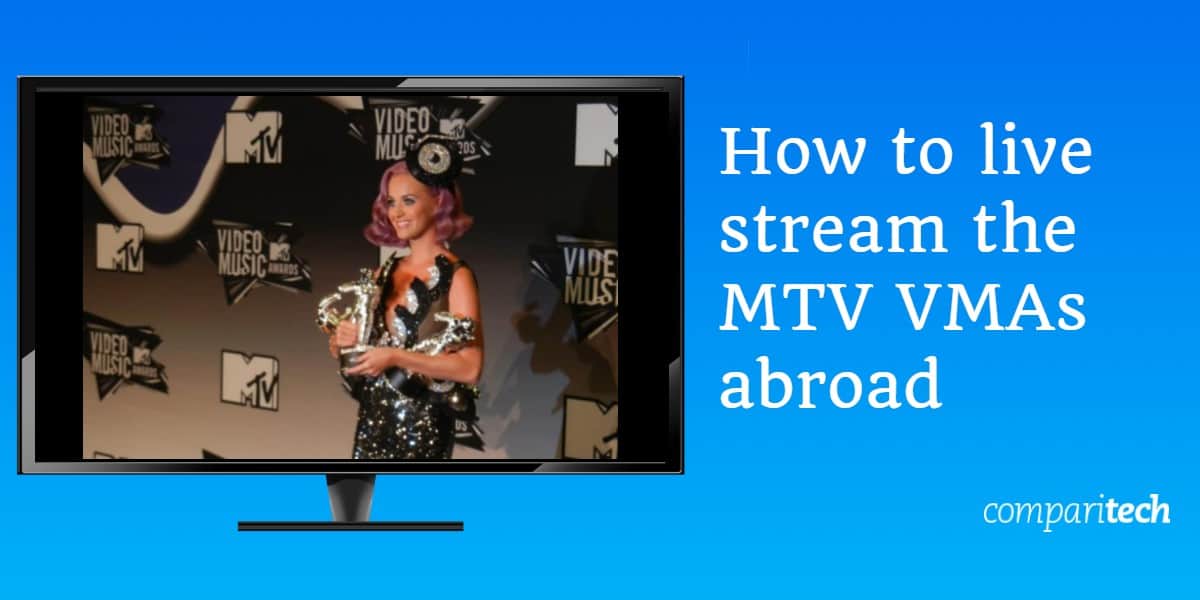 It’s one of the most anticipated events of the season! The 2019 MTV VMAs will take place on Monday, August 26th at the Prudential Center in Newark, New Jersey. Whether spectacular or controversial, there’s always something big happening at these awards, and hearing about it the next morning just isn’t the same.

Thankfully, whether you’re at home or abroad, you don’t have to miss out, as it’s possible to watch all the action live, online, and for free. In this post, we’ll explain how you can use a Virtual Private Network (VPN) to live stream the MTV VMAs 2019 abroad for free, from the US, Canada, the UK, Australia, Thailand, France, Germany, and anywhere else in the world.

Note that to watch the MTV VMAs online for free, you’ll need to use a VPN unless you’re in the US.

How to watch the MTV VMAs with a VPN

MTV’s parent company, Viacom, will be airing the VMAs on some of its channels, including MTV, MTV2, and a few others. While TV channels might show the awards, MTV live streams are limited to US viewers. However, by using a VPN to spoof your location, you can bypass the geo-restrictions and watch from another country.

Here’s how to live stream the MTV VMAs 2019 abroad using a VPN:

Hopefully, it will be as easy as it sounds, but issues can always crop up. As such, a test run well before the show starts is a good idea.

The MTV VMAs will, of course, be broadcast on MTV, and is usually also shown on other related channels, including MTV2, VH1, and MTV Classic. While it hasn’t yet been announced for 2019, in previous years, the VMAs were shown across the Viacom network on channels including BET, CMT, Comedy Central, Logo TV, Spike, and TV Land.

If you’re in the US, you can watch the show online via the MTV.com site. However, use of the live stream function does require that you log in with credentials from a US cable provider, such as AT&T, Spectrum, or DirecTV.

If you have such a subscription but are traveling outside the US when the award show airs, you can simply use a VPN to spoof your location (using the steps above).

If you don’t have a US TV service provider subscription, there is one more option. MTV offers a free 24-hour trial which gives you the perfect window to watch the VMAs. You can sign up through social login or by providing an email address.

You’ll then be granted a 24-hour pass:

How to watch MTV VMAs live streams from elsewhere

Viewers in other countries are limited when it comes to online viewing. MTV has a dedicated channel in many countries, including the UK, Canada, Australia, France, Germany, and many more. These TV channels should all be showing the MTV VMAs live. However, the corresponding local versions of the MTV website (such as MTV.ca and MTV.au) don’t offer a live stream function.

Thankfully, you can still use a VPN to access the MTV.com live stream. Unless you usually live in the US, it’s unlikely you’ll have a US cable provider subscription, so you’ll need to get a 24-hour pass (see the above section).

If you try to complete this process from outside the US without a VPN, you’ll be able to go through the steps for signing up with no issues. However, when you click Watch now, you’ll get an error message: “Sorry this video is no longer available due to rights or restrictions.”

All you need to do is connect to a US VPN server and you should be good to go.

Some streaming services do postpone their free trial periods for big events, but we’re hoping that won’t be the case here.

Who are the 2019 MTV VMAs nominations?

The nominees for this year’s awards were announced on July 23rd and there weren’t too many surprises. Ariana Grande and Taylor Swift lead in terms of number of nominations with 10 nods each. Billie Eilish and Lil Nas X aren’t too far behind with nine and eight nominations respectively.

Here are the nominees for a few of the top categories:

Video of the Year

Artist of the Year