How to watch Shameless US season 10 online abroad (outside US) 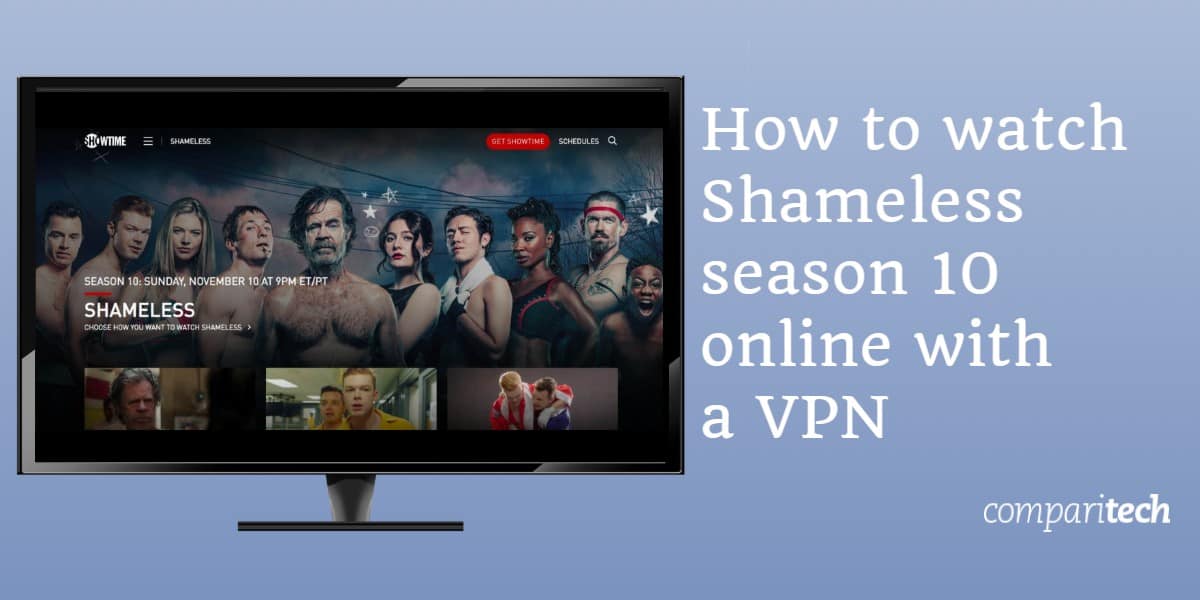 Shameless US season 10 will premiere on Sunday, November 10 at 9 PM EST/PT (1 AM GMT) on Showtime. Showtime is region-locked and only available in the US. In fact, if you try to live stream Showtime content outside the US, you’ll encounter the following message:

“Showtime is accessible for viewing solely in the United States and its territories and possessions.

The good news is that you can watch it abroad by connecting to an American VPN server.

Please keep in mind that we’re only recommending official sources for watching Shameless season 10 online. Unauthorized streams are common but tend to offer poor video quality. Furthermore, such live streams are prone to excessive lag and buffering, plus they can be taken offline without warning for copyright infringement. With several ways to watch Showtime, there’s no need to risk missing out on Shameless season 10 due to dodgy unlicensed sources.

Shameless US season 10 will premiere exclusively on Showtime which is a region-locked platform. In order to live stream Shameless abroad (outside the US), you’ll need a VPN.

How to live stream Shameless US season 10 online abroad

Using a VPN to watch Shameless season 10 from abroad (outside the US) is easier than you might think, even if you’ve never used a VPN before.

Here’s how to watch Shameless US season 10 online abroad:

We recommend you try out your VPN with Showtime in advance. This gives you the chance to contact your VPN’s customer support for further assistance if there are any problems.

How to watch Shameless season 10 online on US TV

There are several ways in which you can watch Shameless US on Showtime. If you have cable, you can add the channel to your pay-TV subscription. However, you can also watch Showtime without cable. A digital-only Showtime subscription costs $10.99 USD per month and includes a 7-day free trial.

There’s also the option to watch Showtime as an add-on via the following streaming services: AT&T TV, FuboTV, Hulu, Sling TV, The Roku Channel, and YouTube TV. Note that while Showtime is also available on PlayStation Vue, the service is to be shut down in January 2020.

All of the above services are region-locked and only available in the US. However, you can watch them abroad with a VPN. ExpressVPN comes with a 30-day money-back guarantee. This means you can try it out risk-free and receive a full refund if you claim within the 30-day period.

Where else can I watch Shameless US online?

Amazon Prime members can subscribe to Showtime through Prime Video Channels. A monthly Amazon Prime subscription costs $12.99 USD (it includes a 30-day free trial) while Showtime is a further $10.99 per month.

Seasons 1–9 of Shameless are available on Netflix US. However, all of these seasons came to Netflix well after premiering on Showtime. As Netflix has not yet announced when Shameless will be available, it’s unlikely we’ll see season 10 on Netflix until mid-to-late 2020.

Can I use a free VPN to watch Shameless season 10?

The likes of Showtime, Hulu, Amazon Prime Video, and Netflix are all geo-restricted and as a result, many free VPNs (and even some paid VPNs) struggle to unblock them abroad. However, that’s not the only reason we recommend avoiding free VPNs; they also tend to struggle when it comes to speed; too many users and too few servers lead to long periods of buffering and choppy, low-resolution playback.

Security is another area where free VPNs are all too often lacking. Some don’t even protect you from data leaks or keep your data secure using encryption. Further, very few free VPNs have a true no-logs policy. This means there’s a possibility that your personal information and browsing history is being tracked and sold to third parties. In summary, the difference between free VPNs and the best-paid VPNs are night and day.

What can we expect from Shameless season 10?

Shameless is Showtime’s longest-running scripted show. While the first eight seasons consisted of 12 episodes each, season nine featured 14 episodes which were split into two seven-episode mini-seasons. However, season 10 will return to its original format of 12 episodes and will air from November 2019 to January 2020.

Season 9 of Shameless left viewers on a cliffhanger as Fiona announced she was leaving Chicago before failing to show at her own leaving party. Needless to say, season 10 will likely focus on the impact her departure has on the Gallagher family. Some plot points have already been revealed by Deadline, though, so we’re not completely in the dark. For instance, we know that Debbie will take over Fiona’s parent-figure role within the family while Frank will use his leg injury to try to score prescription painkillers.

Which cast members are returning for Shameless season 10?