Best VPN for Pandora in 2020 and how to listen abroad

Many internet radio listeners in the US enjoy listening to Pandora for free. But it has been blocked in most other countries since 2007. If you want to keep listening to Pandora while abroad, you will need to use a VPN.
Paul Bischoff TECH WRITER, PRIVACY ADVOCATE AND VPN EXPERT 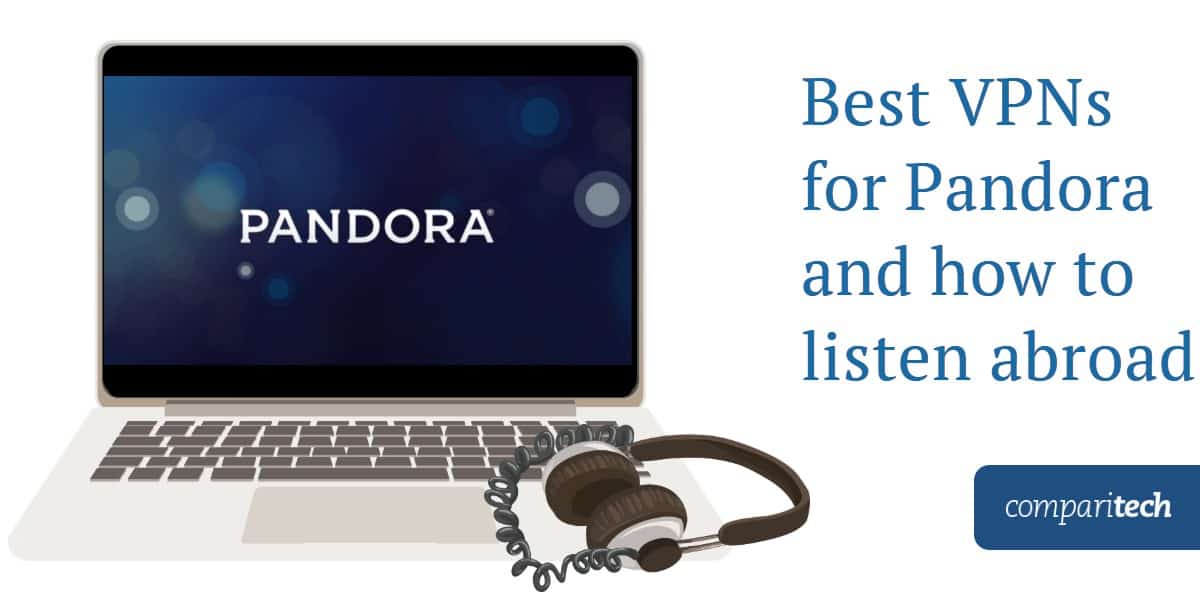 Pandora is the world’s most famous internet radio service. Whereas most streaming radio services recommend music based on what you have in common with other users who like the same music, Pandora leverages the Music Genome Project to suggest music based on hundreds of attributes. With nearly one million songs in its library, it’s a great way to discover new music.

If you want to listen to Pandora outside of the USA, you will need a VPN.

Here is our list of the best VPNs for listening to Pandora from anywhere:

Ever since 2007, however, Pandora has been limited to users in the United States. Under pressure from copyright holders, Pandora started blocking users in other countries based on their IP address.

Even paying users are not allowed to listen from outside those three countries. Anyone who attempts to do so is greeted with the following message:

Fortunately, there’s a simple workaround. All you need is a proxy service, such as a VPN or SOCKS5 proxy. These tools mask your IP address and can make it appear as though you are accessing Pandora from the US.

A VPN, or virtual private network, is our preferred method. A VPN encrypts all of a device’s internet traffic, then routes it through an intermediary server in a location of the user’s choosing. Besides spoofing your location, VPNs offer a slew of other benefits such as better security, more privacy, and access to geo-locked content and services in multiple countries.

VPNs usually come with bespoke apps that don’t require any special configuration on your device. Connecting is as simple as picking a location and flipping a switch.

The best VPNs for Pandora

We’ve narrowed down our list of the best VPNs for Pandora based on the following criteria:

ExpressVPN offers well-designed and simple apps combined with top-tier security and a server network spanning 3,000+ servers in 160 locations operating in 94 countries. That includes multiple cities in the US.

The servers are always reliable and fast, so you should have no problems with smooth playback.

Apps are available for Windows, MacOS, Android, iOS, and Linux (command line). 24/7 live chat support is available 365 days per year if you need any assistance.

Best VPN for Pandora:ExpressVPN is our Top Choice, its great at unblocking geo-restricted content, it has extremely high streaming speeds, easy to use apps for all devices  with total security and privacy. Comes with a 30-day money back guarantee so you can try it risk-free.

NordVPN operates 1,876 servers in the US. It maintains the highest privacy standards and features a “Smart Play” tool that lets you access streaming content from a variety of sources including Pandora.

Apps are available for Windows, MacOS, iOS, and Android. Certain servers are optimized for better security and faster speeds. You can connect up to six simultaneous devices on a single account, making it a great value.

BEST BUDGET VPN:NordVPN is a strong all-rounder, servers located in the right countries for Pandora, also reliably unblocks other popular streaming sites, connects up to 6 devices at one time, live chat support and 30-day money back guarantee.

Surfshark unblocks pretty much any region-locked streaming service you can throw at it including Pandora. It allows an unlimited number of devices to connect on a single plan, and offers apps for Windows, MacOS, iOS, and Android along with browser extensions for Chrome and Firefox. Speeds are decent and reliable.

Surfshark works in China and respects your privacy. It uses strong encryption and keeps no logs of your activity or identifying information. Live chat support is available 24/7 should you encounter any issues.

UNLIMITED CONNECTIONS:Unblock Pandora and other streaming services on as many devices as you want with Surfshark. Comes with a 30-day money-back guarantee.

CyberGhost makes it easy to unblock Pandora with its simple and intuitive apps for iOS, Android, Windows, and MacOS. Whether Pandora isn’t available in your country or your school or workplace is blocking it, connecting to a CyberGhost server in the US will give you access. It works with both the Pandora app and website.

CyberGhost allows up to seven simultaneous connections. It’s great for unblocking a wide range of streaming services. The company keeps no logs and uses strong encryption to keep your privacy intact.

GREAT FOR NOVICES:CyberGhost lets you unblock Pandora and tons of other streaming channels with ease. It comes with a 45-day money-back guarantee.

IPVanish owns and operates its own huge network of servers around the globe. That includes the US. With easy-to-use apps for Windows, MacOS, Android, and iOS, IPV will have you listening to Pandora within minutes of signing up, no matter where you are in the world.

You’ll also enjoy the peace of mind of military-grade encryption and a strict no-logs policy.

Up to 10 devices:IPVanish is great for families, easy to set up and has good security, it comes with live chat support. You can try it out with a 7-day money back guarantee.

VyprVPN prides itself on its wholly-owned network of data centers and server equipment around the world. Several US cities are listed in its roster of server locations. Speeds are excellent and reliable.

Apps are available for Windows, MacOS, iOS, and Android. With unlimited data, bandwidth, and server switches, you never have to worry about hitting a cap.

INDEPENDENT NETWORK:VyprVPN is a solid choice. It stores no logs, offers great security and unblocks most streaming services, not the cheapest option. Get a 30-day PayPal-only money back guarantee.

Hotspot Shield unblocks Pandora with just one click on Windows, MacOS, iOS, and Android. The easy-to-use app can be used on as many devices as you want. Hotspot Shield uses a proprietary protocol to connect to its vast network of servers around the globe, including the US.

Speeds are decent and security is strong. Hotspot Shield retains minimal logs of your IP address while connected.

PANDORA UNBLOCKER:Hotspot Shield unblocks Pandora and other streaming services from any country. It comes with a 45-day money-back guarantee.

We’ve seen reports that Pandora, like other region-locked streaming services, blocks VPN connections. In our testing, however, none of the VPNs we recommended above prevented us from listening on Android or desktop browsers.

If all you want is to listen to Pandora outside of the US, a SOCKS proxy is an acceptable option. Note that it might require configuring the settings on your device to route Pandora traffic through the proxy.

Does Pandora work in Mexico?

Unfortunately, because Pandora is region-locked it won’t automatically work in Mexico. However, if you still want to listen to Pandora whilst traveling abroad in Mexico, all you have to do is connect to one of the VPNs listed above.

Note that Pandora limits free users to a certain number of skips within a set period of time. This limit varies depending on whether you have a paid subscription and what device you’re listening on.

Pandora no longer limits users to 40 hours of listening per month. This restriction has been removed.

Users on free accounts must listen to advertisements that cannot be skipped.