Looking for a free VPN that works with Netflix? Completely free options are unlikely to unblock the Netflix libraries you want. Instead, take advantage of paid services' free trials or low-cost options. We'll show you how.
Aimee O'Driscoll 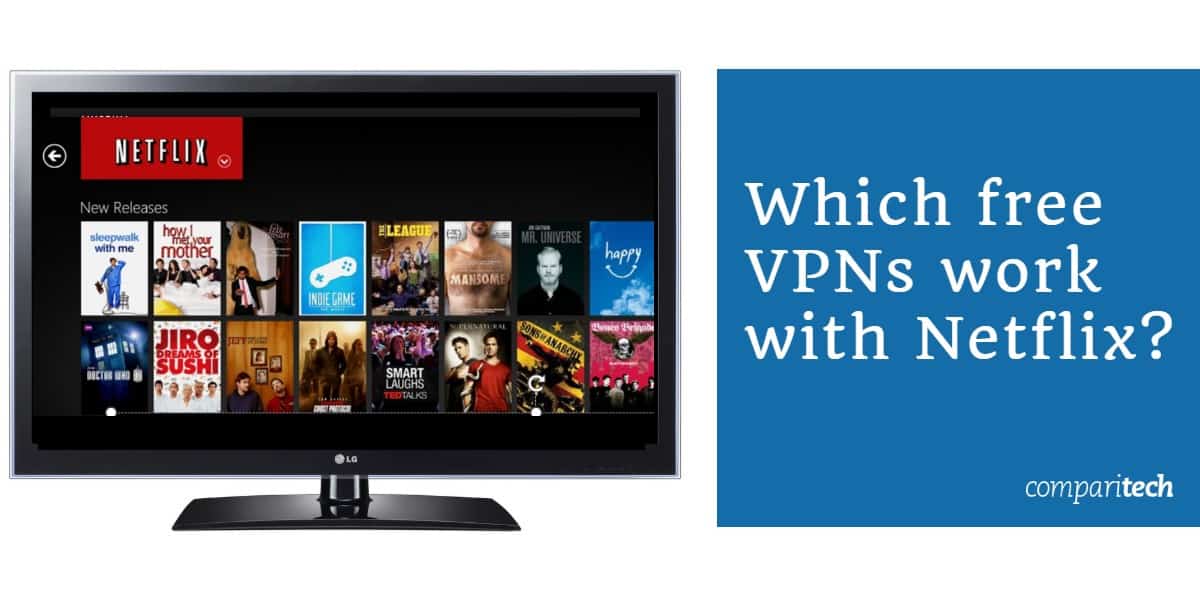 Netflix is available in most countries, but the site will display a different catalog of shows and movies depending on where you are in the world. A Virtual Private Network (VPN) can help you spoof your location and trick Netflix into showing you whichever catalog you want to see.

The VPN encrypts your internet traffic and sends it through an intermediary VPN server that’s situated in whatever location you choose. Netflix is aware that people use VPNs to do this and actively tries to block VPN traffic. It takes lots of resources for a VPN to bypass these blocks, which is one of the major reasons that you’ll rarely find a free VPN that works with Netflix. The following Netflix proxy error is common with free VPNs:

Even if a free VPN does work, there’s no guarantee it will continue to do so. Other issues with free Netflix VPNs include slow, unreliable connections, a small selection of servers, low data caps, and poor privacy policies.

That being said, there are other options if you’re on a budget. For example, if you’re going on vacation and only need a Netflix VPN for a short period, you can take advantage of ExpressVPN’s money-back guarantee. You’ll have to pay upfront, but simply cancel within 30 days and you’ll get your money back with no questions asked, making this a risk-free deal. Find out more about ExpressVPN below.

Steps to get a free VPN for Netflix

Here’s how to get a free VPN for Netflix:

We’ve put together a list of VPN’s that offer money-back guarantees, free trials, or very low monthly rates. There are more details below but here’s an at-a-glance look at that list:

To make our list, VPNs have to meet the following criteria:

Here are our best VPNs for watching Netflix free or on a budget:

ExpressVPN offers a no-fuss 30-day money-back guarantee, making it a great choice for streaming Netflix for free for a short period. It unblocks multiple Netflix libraries, including Netflix US, UK, Australia, Canada, Japan, and France, as well as many other streaming sites, such as BBC iPlayer and Hulu. All servers are optimized for speed, making streaming a breeze.

More than 2,000 servers are available in 94 countries. Not all servers will unblock Netflix, so you may have to contact customer support to find out which one to use. Knowledgeable representatives are available around the clock to help, so this should only take a minute or two.

Apps are available for MacOS, Windows, Linux, Android, and iOS. You can configure the VPN to certain routers, and ExpressVPN even provides its own custom firmware. Connect up to three devices at a time, with a router counting as just one.

RISK-FREE DEAL:ExpressVPN is our top choice for Netflix and you can enjoy a month of its fast, secure service for free by taking advantage of the 30-day money-back guarantee. It offers a seamless viewing experience for many popular streaming sites, so you may just want to keep it.

NordVPN offers a very low monthly price for users on a budget. For short-term unblocking, you can take advantage of its three-day free trial. It reliably unblocks Netflix from almost every server in its vast network (currently more than 5,000 servers in 63 countries). Note that while it unblocks several local catalogs, including US, UK, Australia, Canada, Netherlands, and Italy, it will redirect to the US Netflix library in other cases.

NordVPN pegged some great speeds in our latest round of tests and can handle streaming HD video with no issues. It comes with tight security, including strong encryption, leak protection, a kill switch, and perfect forward secrecy, as well as additional features like automatic wifi protection, which is great for on-the-go streaming. NordVPN keeps no logs.

Desktop clients are available for Windows, MacOS, and Linux, and apps for iOS and Android can be found in their respective app stores. Each plan allows for six simultaneous connections.

FREE TRIAL:NordVPN is an excellent budget option for streaming. It offers low monthly rates, a 30-day money-back guarantee, and a free 3-day trial.

Check out our in-depth NordVPN review.

Surfshark is great for unblocking a variety of Netflix libraries, including US, UK, France, India, Netherlands, and more. Like NordVPN, if you connect to a server in a region for which the library can’t be unblocked, you’ll automatically be redirected to US Netflix. So, no matter what, you’ll at least always have access to the most popular library.

Surfshark offers low prices and is one of the few decent VPN providers that allows an unlimited number of devices to be connected at one time. Speeds are fast enough for streaming so you can expect a stress-free experience.

Security and privacy features are up to par, and include strong encryption, a kill switch, leak protection, and a true zero-logs policy. Apps are available for Windows, MacOS, iOS, and Android.

UNLIMITED CONNECTIONS:Surfshark enables you to stream Netflix on as many devices as you like at a low monthly rate. Plans come with a 30-day money-back guarantee.

Delve into our full Surfshark review.

CyberGhost is an excellent budget option and its apps are designed with a clear focus on users looking to stream. Servers are labeled according to which servers they can unblock, so there’s rarely a need to contact customer support for help. CyberGhost unblocks multiple Netflix regions, including UK, US, France, Australia, Spain, and Italy. What’s more, it performed better than any other VPN in our latest speed tests.

Note that CyberGhost does offer free browser extensions, but these don’t unblock Netflix.

Just because it’s inexpensive doesn’t mean it scrimps on its service. CyberGhost has excellent security, including 256-bit encryption, a kill switch on all platforms, and leak protection. It keeps no logs whatsoever.

CyberGhost apps are available for Windows, MacOS, iOS, and Android, and you can connect up to seven devices at a time.

IDEAL FOR STREAMING:CyberGhost has fast speeds and apps tailored for streaming, making this low-cost provider worth considering. Plans come with a 45-day money-back guarantee.

PrivateVPN is a small provider that still manages to hold its own, having made a name for itself in the industry. Even though it only operates fewer than 100 servers, it is well known for its ability to circumvent some of the toughest blocks from the likes of Netflix, Amazon Prime Video, and BBC iPlayer. Some of the Netflix libraries it unblocks are UK, US, Australia, Japan, Spain, and Germany. Fast speeds and reliable connections make for worry-free streaming.

PrivateVPN scores well when it comes to security and privacy too. It uses 256-bit encryption, includes a kill switch in the Windows app, and maintains a no-logs policy. Apps can be downloaded for Windows, MacOS, iOS, and Android.

Read our in-depth review of PrivateVPN.

What is so bad about free VPNs for Netflix?

We mentioned that truly free VPNs are not a good choice for Netflix, and here we’ll explain more about why this is the case. Free VPNs are run on a tiny budget but are still designed to make money. The lack of resources means that there is little chance a free VPN can reliably unblock any Netflix library, let alone the one you want to access. The lack of funds also means you’ll have to endure a frustratingly slow, unreliable connection, which makes free VPNs highly unsuitable for streaming.

You might wonder how these VPNs make money if they don’t charge you. Some inject ads into the sites you visit, while others track your online activity and sell the gathered data to third parties. Aside from the inherent privacy issues, free VPNs typically won’t give you the security you expect from a VPN. Many don’t encrypt your data and some VPN apps have been found to carry malware or sell your bandwidth.

While you’ll find many free VPNs claiming to work with Netflix, there’s usually a lot more to consider. With so many reputable providers offering free trials, money-back guarantees, or super-low monthly rates, it’s not worth wasting your time with subpar services.

Whichever VPN provider you end up going with, the steps to get started are generally the same.

Video: How to watch Netflix with a VPN

If you get an error while attempting to watch a show, there could be several reasons for this. The most common one is that your VPN simply can’t unblock that region for Netflix. Although some VPNs unblock multiple regions, we are yet to come across one that can unblock them all. Most VPNs focus on unblocking the most popular libraries, such Netflix US and Netflix UK.

Another possible reason for an error is that you are connected to a server that doesn’t work with Netflix. For either of these issues, you can try contacting your VPN provider’s customer support team for guidance. Providers of Netflix VPNs monitor which servers are working with Netflix, so should be able to help you out quickly.

Can I use a proxy to unblock Netflix?

In the past, smart DNS proxies, many of which can be found for free, have been used to unblock Netflix. A smart DNS proxy server monitors DNS requests (domain name lookups) and routes traffic for Netflix requests through a special server.

However, Netflix has caught on to smart DNS proxies and they will rarely work to unblock the streaming service. One that does work reliably is the ExpressVPN MediaStreamer that comes with every ExpressVPN plan.

Note that even if you can unblock Netflix with a smart DNS proxy, these come with other issues. First, most don’t encrypt your traffic, and those that do will only encrypt your browser traffic, so there’s no protection for other apps on your device. Additionally, many free proxies suffer from similar disadvantages to free VPNs, such as a small number of locations to choose from and poor privacy policies.