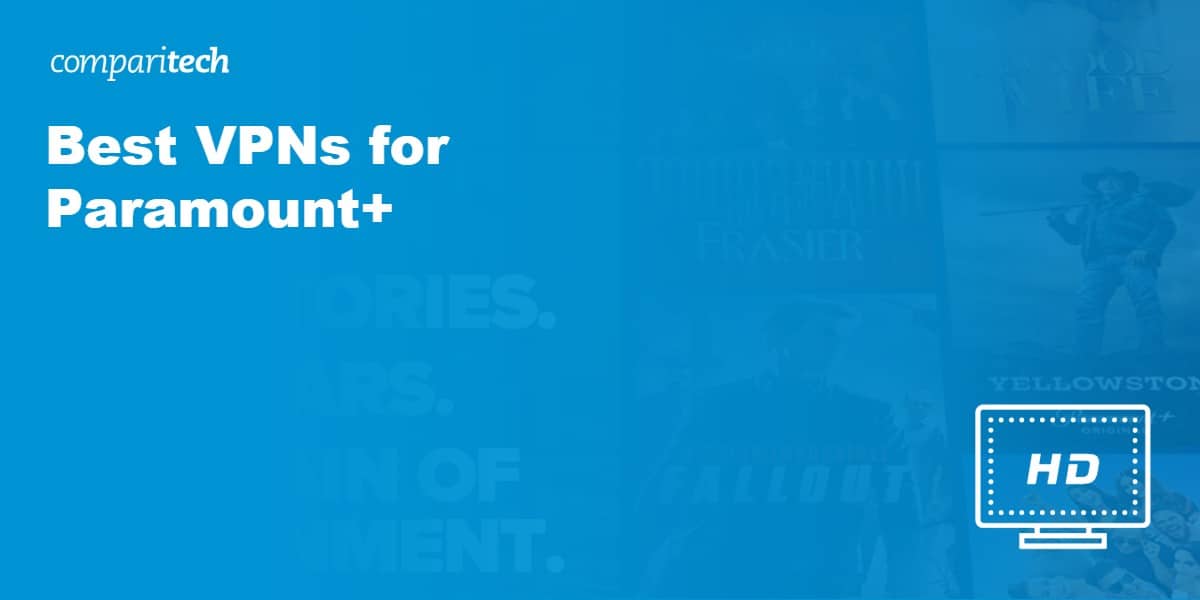 Update 2021: CBS All Access has rebranded under the new name, Paramount+

CBS is the most watched network in America, but if you try to tune in from other countries, you’ll find that the content is geo-restricted. To use CBS All Access (now renamed to Paramount+) in Europe, the UK, Canada, Australia, or anywhere else in the world, you’ll have to connect to a Virtual Private Network (VPN).

VPNs encrypt your data and enable you to route it through a server of your choosing. This greatly increases your online security, but there are other benefits too. Because you’re assigned a temporary IP address from your chosen server, you can trick websites into believing you’re in a different location. For example, by connecting to an American server, you can unblock most US-based streaming platforms, including CBS All Access.

We get into plenty of detail on each of the providers we recommend in this post, but in case you only have time for a summary, here is our list of the best VPNs for watching CBS All Access:

How to watch CBS abroad (outside the US)

Even if you’ve never heard of a VPN before, they’re very simple to set-up and use. Follow the steps below to watch CBS All Access online from anywhere.

Here’s how to change your IP address location from outside the US:

The best VPNs for CBS All Access (now Paramount+)

Not every VPN is created equally, however. Some are faster than others, some offer more security features, and some are entirely unsuitable for streaming live, high-definition video. To find the best VPNs for CBS All Access, we looked for services that met the following criteria:

Based on these criteria we have put together our list of the best VPNs for watching CBS All Access abroad:

With over 1,800 US servers, NordVPN offers more choice than most similar VPN services. Each of these servers is optimized for high-definition streaming and offers lightning-fast speeds, and as this VPN can unblock popular platforms like Netflix, NBC, and Hulu, your choices are almost limitless. Six simultaneous connections are permitted, so you can protect all of your devices with a single account.

NordVPN offers anti-malware and ad-blocking features, as well as a highly versatile kill switch. It features 256-bit AES encryption, DNS protection, and keeps no logs, making it a strong choice for privacy-focused users. Additionally, advanced users have the ability to use two VPNs at once, or connect to Tor over VPN.

This provider has apps for iOS, Android, Linux, MacOS, and Windows. NordVPN also works with some routers, although it must be manually configured.

BEST VPN FOR CBS ALL ACCESS:NordVPN is our #1 pick. Works reliably with Paramount+ and most popular streaming sites. Connects up to 6 devices simultaneously. Strong security and a risk-free 30-day money-back guarantee.

CyberGhost works differently to most VPN services; while you can manually choose a server, you can also pick one that’s suited to a particular task. These tasks include safely browsing the internet, torrenting anonymously, and unblocking streaming services such as CBS All Access, NBC, and SKY GO.

Despite its novice-friendly interface, CyberGhost includes several security features for more advanced users. For instance, there are options to force HTTPS, block ads and malware, or cut traffic when the connection to the VPN is dropped. This provider uses 256-bit encryption, keeps no activity logs, and protects against DNS, IPv6, and port forwarding leaks.

Android, iOS, Windows, Linux and MacOS apps are available. CyberGhost can be manually installed on a selection of supported routers.

ExpressVPN has servers in 20 cities. This makes it easy to watch regional coverage from all over the country. Plus, thanks to its high speeds, you can experience flawless HD live streams. Additionally, ExpressVPN can unblock a host of popular streaming platforms including the content library of Amazon Prime Video, Netflix, and Hulu.

This service keeps your online activity secure using 256-bit encryption, perfect forward secrecy, and DNS leak protection. You can use the Tor-accessible version of the site and pay in bitcoin should you wish to remain anonymous. ExpressVPN doesn’t keep any logs and includes a kill switch that drops your internet connection in case the VPN connection is lost.

STREAM CBS ANYWHERE:ExpressVPN boasts high speeds and the ability to unblock plenty of major geo-restricted streaming services. Top privacy features and keeps no logs. It even comes with a 30-day money-back guarantee.

IPVanish has risen to popularity thanks to its high speeds and ease of use. It has more than 650 US servers, and its speeds are fast enough to stream live, HD content without any buffering. IPVanish is capable of unblocking several popular platforms including CBS, NBC, and CW TV, making it a strong choice for fans of US programming.

With 256-bit encryption and a no-logs policy, IPVanish keeps your online activities private. Users can avail themselves of the kill switch, IP switching, traffic obfuscation, and local blocking features, to increase their security even further. Five connections are allowed at once, so one IPVanish account can lock down all of your home’s devices.

Despite having a smaller server network than some of its rivals (around a dozen in the US), PrivateVPN is fast enough for online streaming HD video with no problems. It excels at unblocking streaming platforms too, so you can use it to access sites like Amazon Prime Video, Yahoo View, and Netflix.

PrivateVPN uses 256-bit AES encryption coupled with DNS and IPv6 leak protection to keep your traffic private at all times. There’s also a kill switch to help protect users with inconsistent internet connections. This service doesn’t log any details of your activities. Support is available 24/7 via live chat and the staff are capable of remotely troubleshooting any issues, with your permission.

This VPN offers dedicated apps for MacOS, iOS, Windows, and Android. Linux systems and routers must be configured manually.

GREAT SPEEDS:PrivateVPN is easy to use. Allows up to 6 devices on the same account. Offers a smooth streaming experience. Fast connections but could do with having more servers to chose from. 30-day money-back guarantee.

Hotspot Shield provides access to more than 1,800 servers in over 80 countries, making it an ideal VPN provider for watching region-locked content abroad. In fact, as well as unblocking CBS, Hotspot Shield lets you use services like Netflix US, Hulu, and All 4. With up to five simultaneous connections allowed, you can stream on whichever device you prefer.

This service has quite a strong security offering. It secures your traffic with DNS and IPv6 leak protection, 256-bit encryption, and a kill switch. You can also choose to connect to the VPN automatically while on unsafe networks, or allow traffic from certain sites bypass the VPN entirely. Hotspot Shield doesn’t log any identifiable information after you’ve disconnected. While the apps are particularly user-friendly, live chat-based support is available 24/7.

Can I use a free VPN to watch CBS?

While there are hundreds of free VPN providers available, we strongly advise against their use. First of all, free VPNs often provide a substandard experience because they have fewer servers and yet more users than premium services. Second, streaming sites have been cracking down on VPN usage in recent years, so there’s a good chance that a free VPN wouldn’t work, even assuming you had a decent download speed.

It’s easy to forget that free VPNs are businesses. Despite their rhetoric about protecting privacy, they exist to make money. As there are no upfront fees, free VPNs use several different ways to profit from you. Their money-making methods range from putting ads onto the sites you visit, to selling details of your activities to third parties without your knowledge.

There are good reasons to be skeptical: in recent years, we’ve seen free VPN providers knowingly install malware, lie about their encryption protocols, and even turn their users’ computers into part of a botnet. In order to keep yourself and your personal information safe, we recommend using a reliable VPN with a history of protecting its users’ privacy.

Can I watch CBS All Access outside the US?

CBS All Access is only available in the US and Canada. You can sign up from anywhere, provided you have a payment method linked to an address in one of these countries, but if you’re outside of North America, you won’t actually be able to watch anything.

This all changes when you connect to a VPN, though. If you were to use an American server, it’d change your IP address, which is what platforms like CBS All Access use to tell which country you’re in. For all intents and purposes, this would make you indistinguishable from someone who really was in the US. As a result, you’d be able to watch CBS All Access (and most other region-locked American services) from abroad.

Why is my VPN not working with CBS All Access?

CBS is a particularly stubborn service, and blocks many VPNs outright. However, you could still see errors even if your VPN is working perfectly. For instance, if you’re using an ad-blocker, videos won’t play until you turn it off. Confusingly, it appears that all kinds of privacy addons can cause this same error message. As such, if you use Ghostery, Privacy Badger, or any similar tracker-blocking browser extensions, you’ll likely have to disable these before streaming. Some VPNs even offer ad and tracker-blocking features of their own, so make sure to turn these off too.

Still having problems? The quickest fix is usually to try a different server, but if you’ve tested a few already, we’d recommend getting in touch with your VPN’s support team. They’ll be able to tell you whether there are specific servers to use. If none work, unfortunately, there aren’t many other options except for trying another VPN entirely.

Yes, like most major streaming services, CBS All Access (Paramount+) tries to prevent VPN users from watching anything. However, its detection measures aren’t perfect and popular providers are constantly finding workarounds to any new blocks that are put in place. Put simply, if a multi-billion dollar company like Netflix can’t fully block VPNs, nobody can.

Is it legal to use a VPN with CBS All Access?

It’s not actually against the law in most countries to access geo-restricted content from abroad. This means that the worst that can happen is you’ll have your account banned. However, this is extremely unlikely, since using a VPN isn’t expressly prohibited by CBS’ own terms of service.

Interestingly, these acknowledge that the location detection features that CBS use are not infallible, and as such, you may not be able to access services that you should. We can assume then, that as long as you’re in the US, there’s no issue with you using a VPN to get around this issue.

What can I watch on Paramount+ (previously CBS All Access)?

There's a ton of content on Paramount+ and more (including original programming) arriving all the time. Below is a small selection of what you can expect to find in the Paramount+ library: