VMware is the most widely used virtualization system in the world. If you use VMware , find out how to back it up.
Stephen Cooper 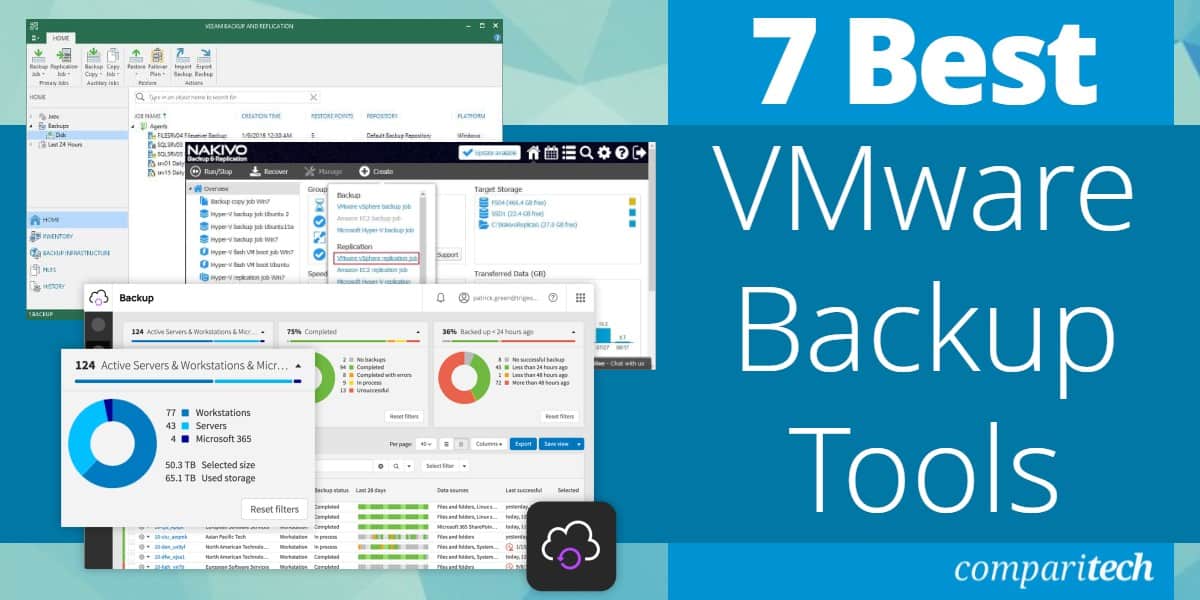 There are two terms related to VMware – “virtualization” and “hypervisor.” While virtualization refers to the concept, a hypervisor is a software that creates virtual machines. Effectively, the two terms are interchangeable.

Here is our list of the seven best VMware backup tools.

Backing up virtualizations is a flexible concept because all the hypervisor has is a mapping between an imagined architecture and the real, physical, underlying system.  When you back up systems, you need to copy all of the data that the system uses. It isn’t usual to copy software because that is usually available on disks or through downloads. However, reinstalling software usually loses its settings. In addition, the configuration of a hypervisor can take a lot of work to set up, so having to go through the whole process again if a physical server gets damaged and needs to be replaced can be very time-consuming.

Backing up VMware can mean two things – copying over its configuration or extracting all of the data contained within the system represented by the hypervisor. Of course, you will need to backup all of your data anyway, so you can do that within the structure that the hypervisor creates or get under the VMware software and just take a snapshot of the entire disk.

Another complication when looking into VMware backup services is that some declare that they back up the virtual servers. In contrast, others say they backup the entire hypervisor. Of course, In reality, no one would just want to copy the server and leave out the virtual switches and VM mapping – so effectively, systems that say they only copy the server really also save the structure of the entire hypervisor. However, don’t expect the backup tool to copy over the VMware software package in all cases.

When looking into a really good backup system for VMware you need to adapt your search according to your current system and personal architecture preferences. In other words, you will probably prefer to have on-premises software or a cloud service. Similarly, if you already have your own cloud storage server contract sorted out, you will probably want to use that. Otherwise, you might prefer to find a system that has cloud storage included in the plan.

What should you look for in a VMware backup tool?

We reviewed the market for systems to backup VMWare and analyzed the options based on the following criteria:

With this set of criteria in mind, we have identified several options for VMware backup and recovery systems with different implementation strategies. 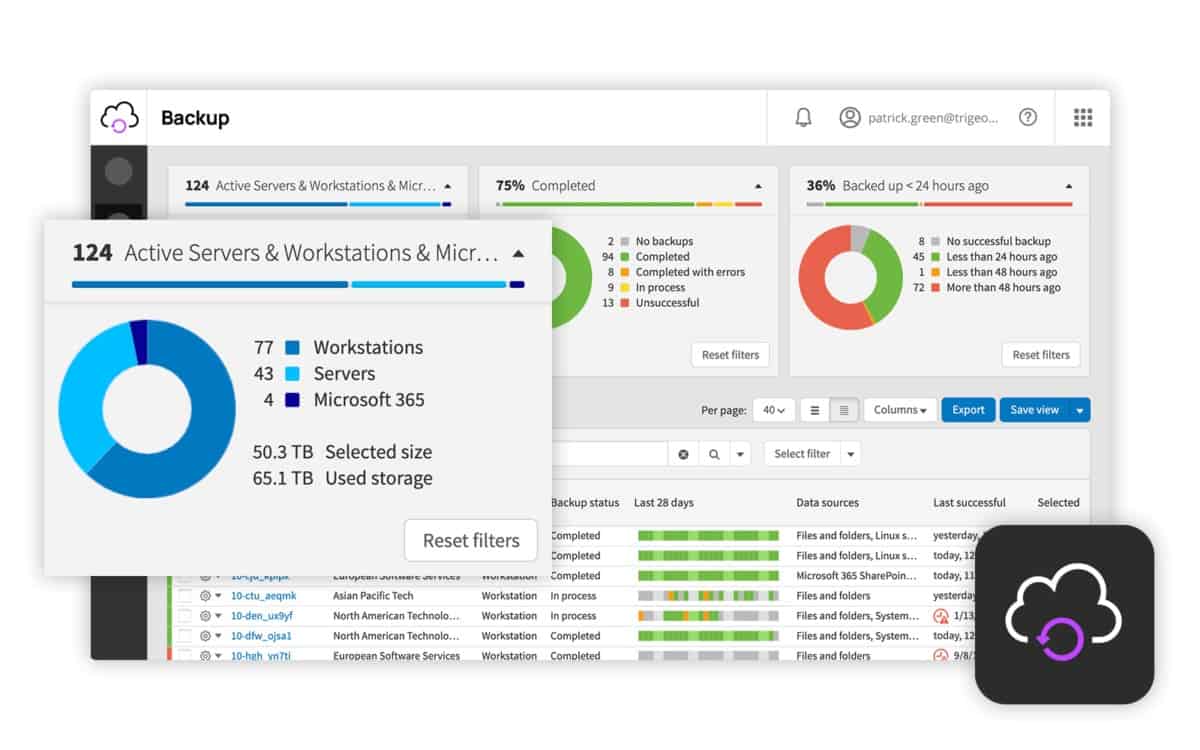 N-Able Backup is a SaaS package designed for use by managed service providers, but it could also be used by the IT operations department of a multi-site business. The configuration of the tool ensures that the data of an MSP’s clients are kept separate. In addition, the N-able package includes cloud storage space for backups.

The console of N-able Backup includes a list of backup options that allow you to select which systems to back up. This can be an entire server or specific applications. VMware vSphere is one of those applications that can be backed up.

Backups are created locally and also onto the cloud storage. The transfers and the remote storage are protected by 256-bit AES encryption. The administrator console allows the creation of multiple user accounts. It can grant different access rights to each performance, and user activity is logged for extra security.

In both backup and recovery, this system uses deduplication and compression to speed up transfers. In addition, it is possible to use the backup to migrate or replicate your system, letting the VMware structure mask changes in the underlying architecture.

N-able backup is a subscription service that is available for a 30-day free trial.

N-able Backup is our top pick for a VMware backup service because it gives you the option to backup your whole server with the hypervisor on it or backup the system through virtualization. Server backups can copy over disks running Windows Server and Linux. You get a local backup store as well as a cloud store on provided space. This system is fully protected y encryption and offers speedy transfers.

Get a 30-day free trial: n-able.com/products/backup/trial

Nakivo Backup & Replication covers EXSi and vCenter-managed systems. In addition, this provider has a range of other backup service options, so it is possible to combine a backup service for several applications, including databases, Active Directory, and Microsoft Office. The system will also entire backup servers running Windows Server and Linux, and it can backup cloud accounts on Azure and AWS. Hyper-V and Nutanix systems can also be backed up with Nakivo.

The Nakivo system is based around incremental backups, but it is possible to set up periodic, scheduled full backups to reset the update cycle or demand it manually. You decide where the backup files are to be stored. Nakivo doesn’t include cloud storage space in its service, but you can choose a third-party storage package and attach its location and credentials in the settings of the Nakivo system.

The backup service can be used for recovery to the original location, but it can also migrate to a new site. This is a valuable option to deal with environmental damage that knocks out the company’s premises. With this service, you can get set up on a new site quickly.

Nakivo is an on-premises software package installed on Windows, Windows Server, or RHEL, Ubuntu, SLES, or CentOS Linux. The package runs as a virtual appliance with its bespoke hypervisor. Nakivo is available for a 15-day free trial. 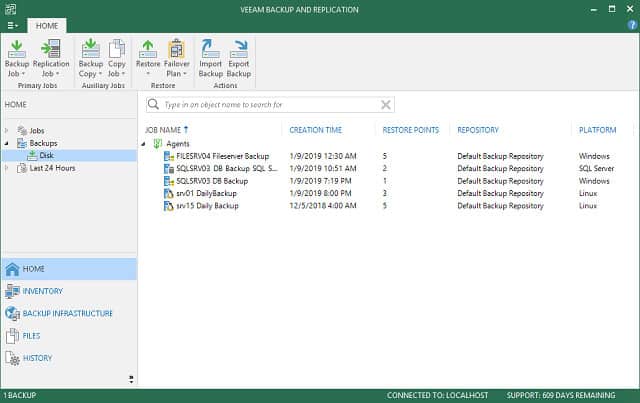 Veeam Backup & Replication is a cloud-based service integrated with other Veeam system management products or as a standalone package. As a cloud-based system, Veeam isn’t restricted by location, so it can backup VMware operating on any of your sites, and it also has cloud virtualization capabilities. As well as VMware, the hypervisor backup service can handle Hyper-V implementations.

The Veeam backup system can back up entire servers down to the operating system or bare metal. In addition, it can backup NAS clusters and other storage systems. The service has options for backing up applications other than virtualizations.

A VMware backup can be implemented for VMware vSphere 5.5, vSphere 6.x, and vSphere 7.0. As well as recovery, a Veeam backup of VMware can be used for migration to other sites or platforms. The recovery service is called Instant VM Recovery. It selects a server and then restores all of its infrastructures simultaneously with a multi-threaded architecture. 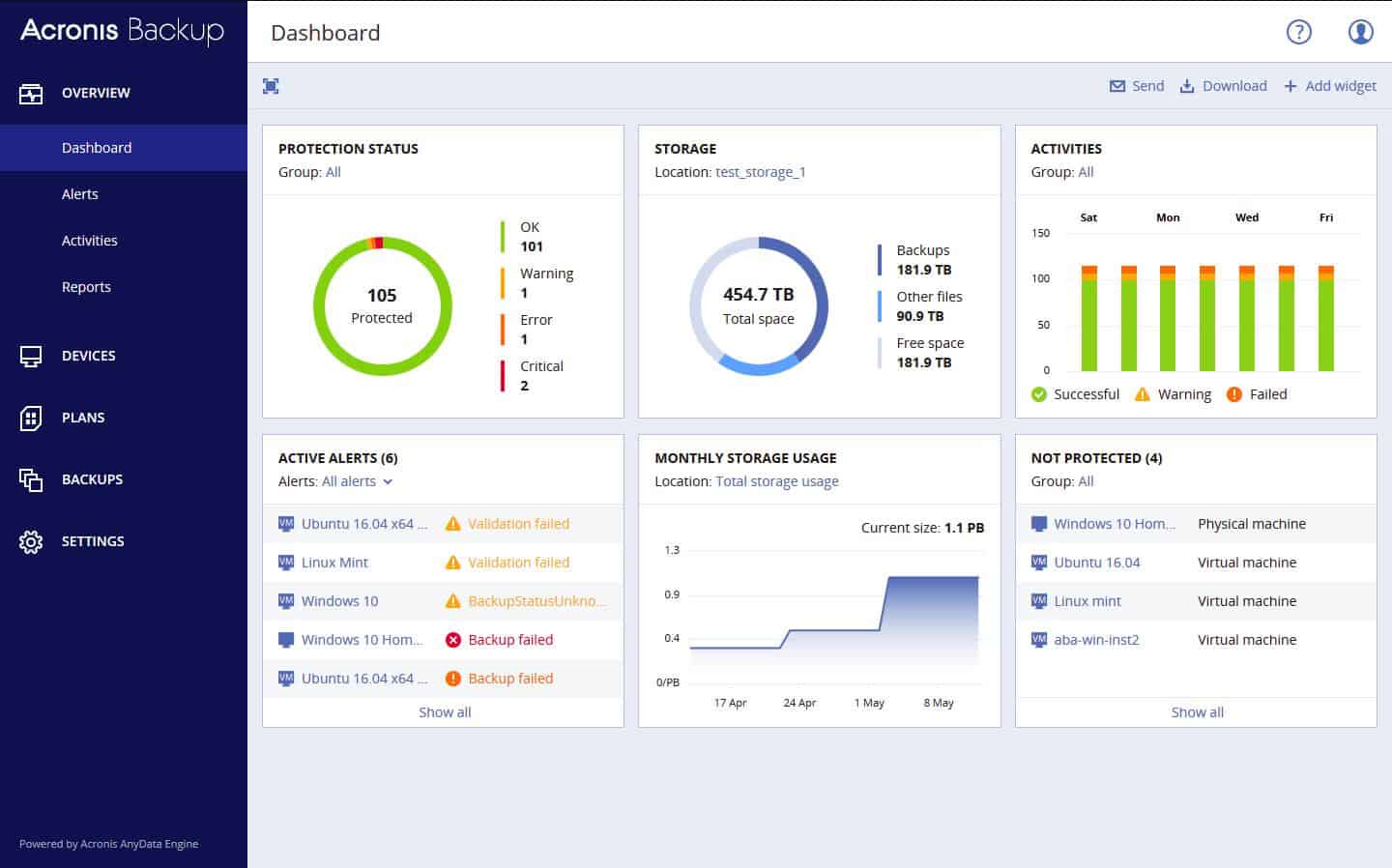 Acronis Cyber Backup is a cloud-based service that backs up both on-premises and cloud environments. As well as whole server backups, the Acronis system includes specialist services to protect applications, including virtualizations.

The hypervisor backup service of Acronis Cyber Backup is compatible with VMware vSphere. In addition, flavors are available to back up Hyper-V, Citrix Xen, Red Hat Virtualization, KVM, and Oracle VM.

Acronis works on an incremental backup schedule, but you can mix in periodic full backups. The system will create a local copy and backup to cloud storage – 250 GB of space on the Acronis service. The backup can also be used for migration.

Acronis Cyber Backup is packaged per server or application. Therefore, you would take out different services for each application. However, the full complement can all be accessed from one console. The VMware backup service fee is levied per virtual server with no limit to the number of VMs on each.

There is a more complete version of this service that includes malware protection, called Acronis Cyber Protect. Acronis Cyber Backup is available for a 30-day free trial. 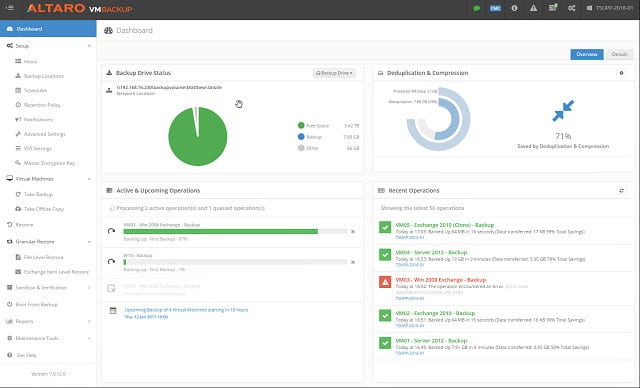 Altaro VM Backup is available in flavors for backing up VMware and Hyper-V virtualizations. The strategy of this package starts with a full extract and then incremental backups. The default operations of this backup system don’t occupy much processing power and can be left running continuously as a background process.

This on-premises package is not limited to one site. It can operate over a network and across the internet to many backup servers on multiple locations in the same account. In addition, its backup can replicate or migrate VMware implementations. There is also a multi-tenanted version of Altaro VM Backup for MSPs.

Altaro stores a backup locally and will then upload it to a cloud server. There is no cloud storage service included with this system, but you can integrate it with storage from Microsoft Azure, Amazon S3, or Wasabi. It is also possible to send a backup file to one of your remote sites.

The VMware version of Altaro VM Backup installs on top of the VMware hypervisor. The Hyper-V version runs directly on Windows Server or on Azure for a hyper-converged configuration. Altaro VM Backup is available for a 30-day free trial.

Vembu has created a very flexible package in its BDR Suite because the service is available in free and paid versions, and it can be used on a cloud platform and your site.

BDR is Backup and Disaster Recovery. The package has specialized capabilities for backing up applications, and it can also be used for entire backup servers. The applications that can be protected with this service include VMware. There are also special modules to backup Hyper-V, Office 365, and G-Suite. In addition, the service can entire backup systems running Windows, Windows Server, Linux, or macOS, and it can backup an AWS EC2 or an Azure account.

The flexibility of Vembu extends to how you configure the system. You can store a backup locally, on a remote server, or a Cloud account. You can also select several locations for backups, duplicating your continuity security. Cloud storage space isn’t included in the Vembu package, so keeping your backups is up to you.

The free version of the Vembu BDR Suite is restricted to backing up 10 VMs. Otherwise, that package offers the same utilities as the paid version. In addition, you need to install software on a server on your network to back up a local device. That service is available for Windows Server and Ubuntu Linux. Vembu BDR Standard is available for a 30-day free trial. 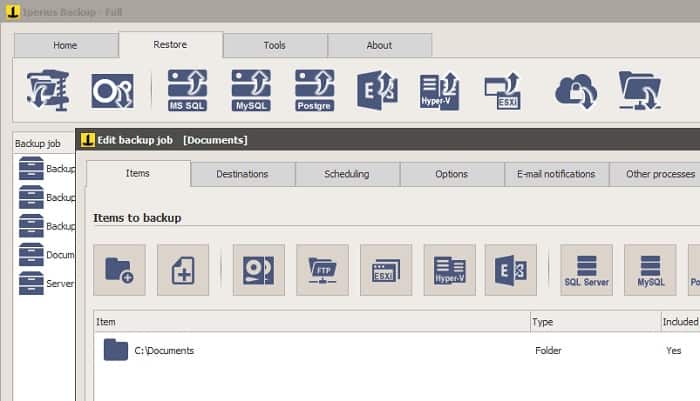 Iperius Backup offers disk image backup, block-level copying, and application-specific backups. The applications that this system protects include VMware systems. It can be used for ESXi Free, ESXi, and vCenter-based systems. The service can also back up Hyper-V. Other applications that can be backed up with Iperius include databases and Microsoft 365.

The Iperius Backup system works on an incremental strategy after taking an initial full backup. You can set up a schedule that includes a periodic full backup or create a full backup on demand. If you want to opt for server backup, the copy will take your VMware data with it. As a result, VMware backups can be used for replication or migration – even onto a different system architecture.

Choose to backup locally, on the cloud, or both. Storage space is not included in the plans, but Iperius does offer cloud storage space on a separate subscription. Other benefits of the Iperius service include the Iperius Recovery Environment, which can reassemble lost files in damaged operating systems. Backup and recovery transfers are compressed for speed and encrypted for safety.

Iperius Backup installs on Windows Server, and you can assess it on a 21-day free trial.