Surfshark has been creating quite a buzz on the VPN scene over the past few years, giving some of its larger top-rated competitors a run for their money. Unlike many other VPN providers, Surfshark isn’t one for grand claims. It bases its sales pitch on privacy and security.
So how does this VPN really compare to the industry giants like ExpressVPN, NordVPN, and CyberGhost? Does it offer a similar experience or does it fall short?
In my 2020 Surfshark review, I tested out desktop and mobile apps to see how this provider measures up. Here are some of the questions I wanted to answer:

In this review, you’ll find the answers to those questions and many more.

I’ve been using Surfshark to stream, browse, torrent, play online games, and access public wifi. Below is a quick summary of my experience, but you can read on to find out more about why this VPN is increasingly popular.

Surfshark is a lightweight VPN that comes with an expansive suite of features. It’s secure and private and offers excellent customer service. Surfshark enables you to unblock a huge number of restricted apps and sites and works well in China. There’s no connection limit, which is a huge bonus these days.

Surfshark can be fast, but speeds may be inconsistent, so you might need to be selective with servers, for example, when torrenting large files. If you’re mainly looking for a solid VPN for streaming and browsing, Surfshark has enough perks to make it worth your money.

How does Surfshark compare to other popular VPNs?

Comparing VPNs side-by-side can give a good indication of the caliber of provider you’re looking at. Here’s how Surfshark compares to two top-rated providers, ExpressVPN and NordVPN. You can find out more about these two in our in-depth comparison.

Here’s a summary of the things Surfshark gets right and where improvements could be made:

I’ll delve into more detail on each of these points below. 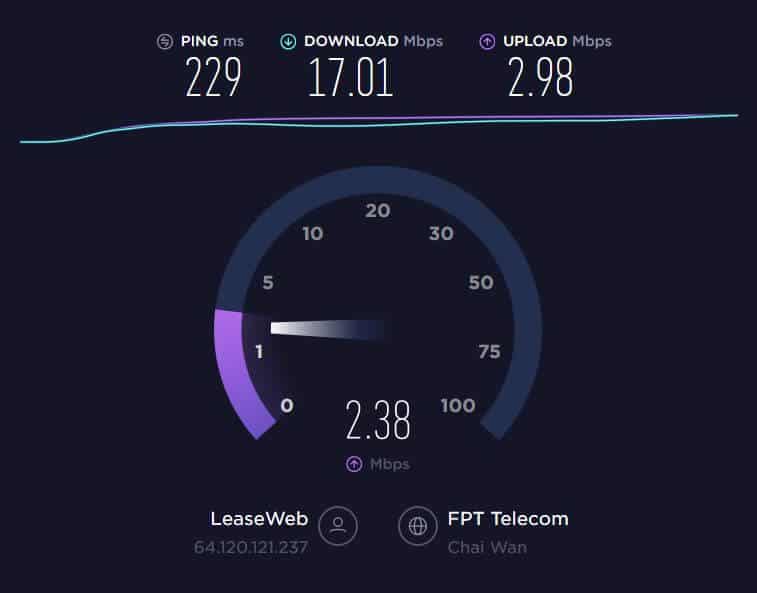 Since launch, Surfshark has been ramping up its server count pretty fast. Its network has now expanded to more than 1,700 servers covering over 60 countries. This is a smaller operation than those of rivals like ExpressVPN and NordVPN, but it’s larger than the industry average.

We tested Surfshark server locations at three different times during the day. The average speed across all tests was 40 Mbps. This puts it roughly in the middle of the group as compared to other VPNs we’ve tested.

The server locations were in North America, Asia, and Europe. Here are the average speeds:

For nearby servers, Surfshark gives consistently good speeds. Things seem to be a bit hit and miss once you start connecting to servers farther away.

It’s worth noting that these tests aren’t definitive and only offer a general indicator as to the type of performance you might see in practice. The internet is inherently volatile which adds a randomness factor to speed test results. Depending on your base internet speed, you may see larger discrepancies in speeds when connected to the VPN.

Apps: What devices work with Surfshark?

One of the biggest perks of this service is the ability to connect as many devices as I want to the VPN at a given time. Most providers restrict connections to between five and 10. This might seem like a lot, but these days, the number of devices a family is using could quite easily surpass that limit.

So which operating systems does Surfshark work with? Apps are available for the following:

Multi-language browser extensions are available for Google Chrome and Mozilla Firefox, though bear in mind these will only protect browser traffic and not your entire device. Surfshark can be manually installed on compatible home routers if you want to protect all your devices.

Surfshark’s new and improved apps are lightweight so they should work with low-end devices. I find them a bit more intuitive than the older versions.

The server list is displayed when you launch the app. You can connect to the fastest server, a server in the nearest country, or select a country of your choice. Countries are listed in alphabetical order. There’s a search function and I can add locations to a favorites list by clicking the star to the right of the location. You can see a rough indication of the total load on a location’s servers by looking at the circle to the right of the location name. 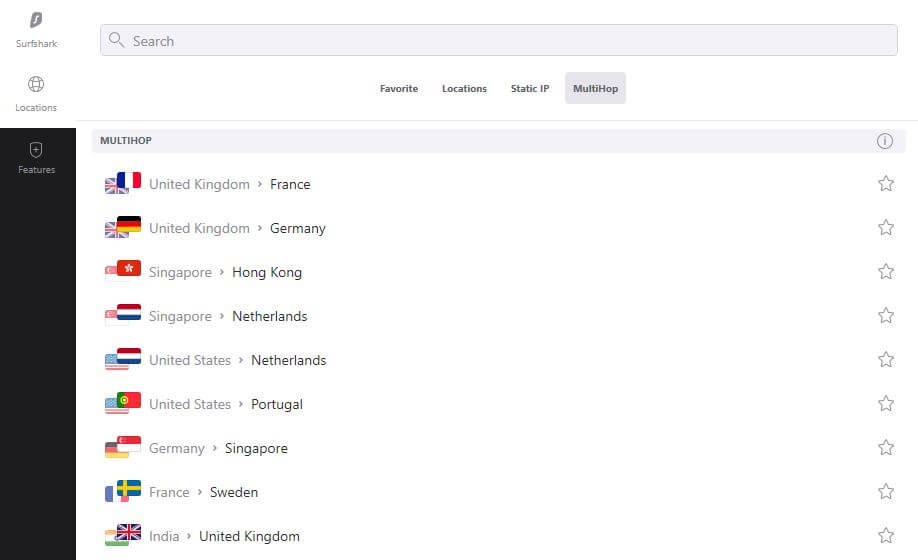 Notably, there’s a separate list for MultiHop (double VPN) servers, which is far more extensive than you’ll see for most other VPNs that offer this feature. 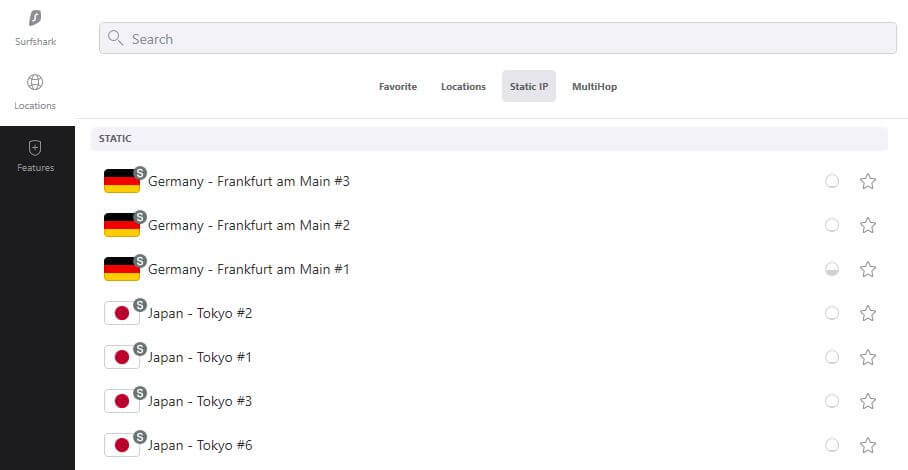 You’ll also find a list of static IP servers for several countries, including Japan, Germany, and the US. This option enables you to connect to the same server each time (instead of being assigned one at random), which is handy if you’d like to keep the same IP address. This is available on the Windows and Android apps.

You can change the overall aesthetic of the app to a darker version by enabling dark mode.

There are several more features including the kill switch, protocol options, and NoBorders mode which I’ll go into later. 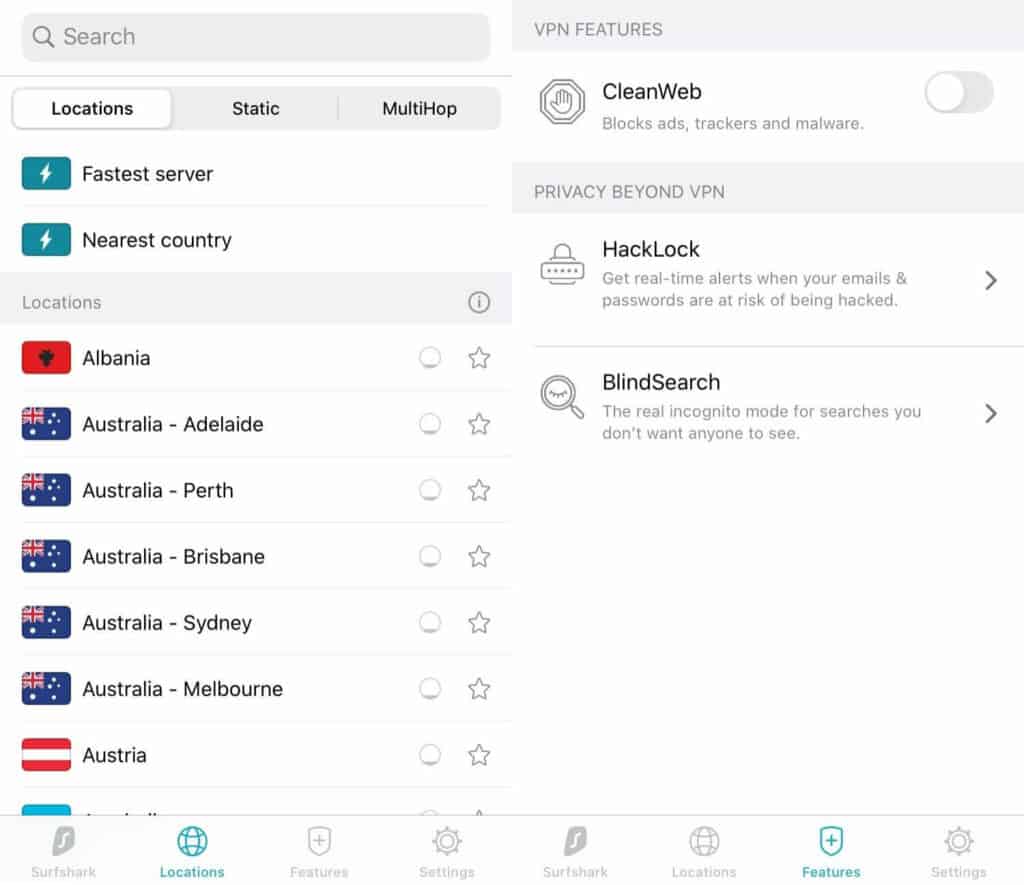 The mobile app is very similar to the desktop version so switching between them is a breeze. The feature roster varies slightly from app to app, but the mobile versions offer more than you’d find in many rival VPN apps.

Yes, Surfshark unblocks multiple Netflix libraries including Netflix US, UK, Canada, Australia, Japan, India, Singapore, France, Germany, Italy, and a few others. If it can’t connect you to the library that corresponds to the server you’re connected to, it will redirect you to US Netflix.

Overall, Surfshark is one of the best services out there when it comes to unblocking region-locked content.

The VPN works with most devices that run Kodi and is compatible with Kodi addons.

Data is unlimited, P2P is allowed, and Surfshark operates using a true no-logs policy. When you start running a P2P app while connected to the VPN, Surfshark will automatically connect you to a special P2P server (the closest one available).

There is also a split tunneling feature which allows you to choose which traffic goes through the VPN. This is handy if you want to use the VPN for torrenting while using a regular connection for other activities.

In addition, all Surfshark apps have a built-in kill switch which will force my internet connection to drop if the VPN connection drops unexpectedly. Note that the kill switch is disabled by default but you can toggle it on in the app settings.

On the surface, Surfshark’s security features look fairly standard in comparison to other major VPN providers. It uses 256-bit AES encryption, which is as good as it gets. This is in conjunction with a SHA512 authentication hash and 2048-bit DHE-RSA key exchange, along with perfect forward secrecy.

OpenVPN is enabled by default on the desktop apps, while IKEv2 is the default for mobile. Shadowsocks encryption is an additional option for Windows and Android users, in case the other protocols cannot be established. 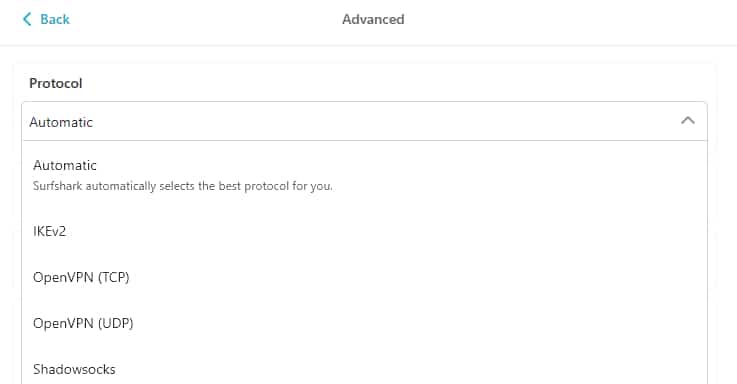 Surfshark includes a kill switch that can be toggled on and off within the apps. This will prevent you from browsing unprotected should the VPN connection drop.

Apps come with the following features that you won’t often find on other VPNs: 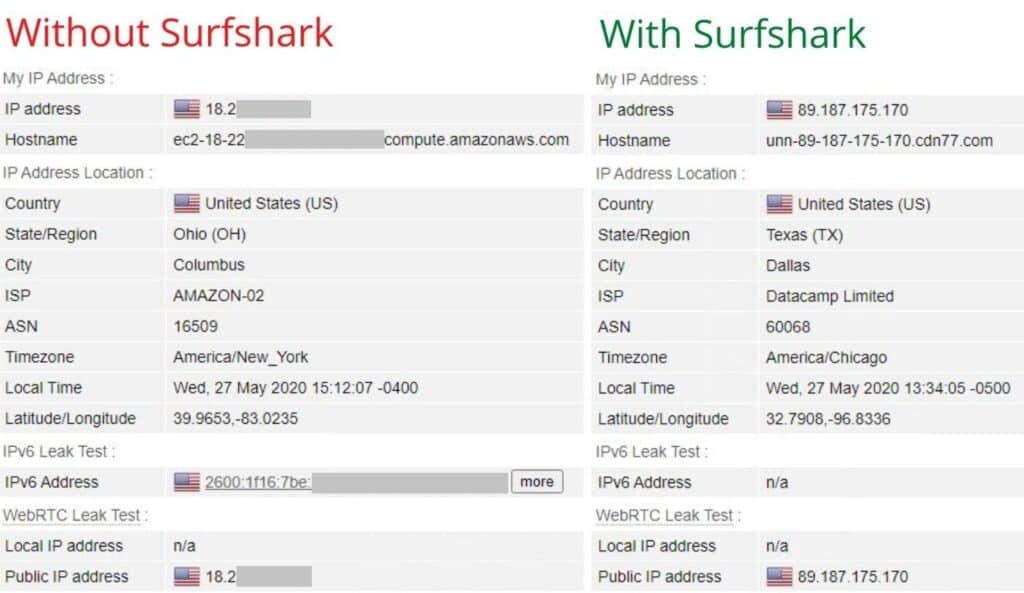 Surfshark is based in the British Virgin Islands, which happens to be home to top-rated provider ExpressVPN. In fact, it’s no coincidence that they’re both based here and it’s clear that the two companies recognize the advantages of being located in a country where the government doesn’t require any data retention or reporting.

You won’t have to worry about your information being tracked while using this service. Surfshark is very explicit about its zero-logging policy. It keeps no traffic logs and, according to its privacy policy, it does not “collect IP addresses, browsing history, session information, used bandwidth, connection time stamps, network traffic and other similar data.”

This means that even if the company was forced to hand over data, there would be no personally identifiable information to give. You are required to provide an email address upon signup, which is stored, but if you use a burner email and pay using cryptocurrency, there would be almost no trace of you having signed up at all.

Does Surfshark work in China?

Surfshark has recently added a large number of additional servers. One of the major reasons for this is to provide as many IP addresses as possible to help defend against China’s blocking process. Surfshark has dedicated testers in China who can confirm if all is well or if there are any issues.

It’s becoming increasingly difficult for VPN providers to evade the Great Firewall of China and few are able to do it reliably. Many will come right out and say that’s it too difficult and they’ve all but given up, whereas you have others, like Surfshark, who keep fighting to offer access to the free web.

Is Surfshark customer service any good?

Navigating to the Help section on Surfshark’s website, you’ll find a decent amount of information to help you get started with the service. There are various setup guides, including manual connection guides, router tutorials, and extension and app guides. In addition, some FAQs are answered.

Most of what you need should be there, but if not, 24/7 live chat is available to help. I used this service a handful of times and received courteous and prompt responses that helped resolve my issues and answer questions. 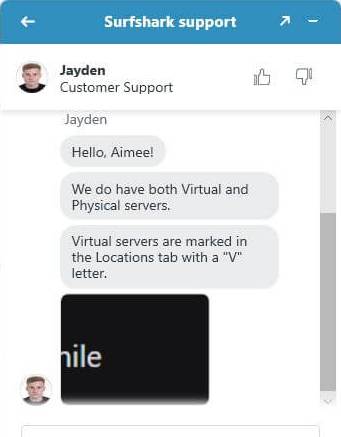 The live chat feature is outsourced to Zendesk, so those looking for the utmost privacy may want to use the email form. This seems to be well manned and I got a response to my query in under an hour. 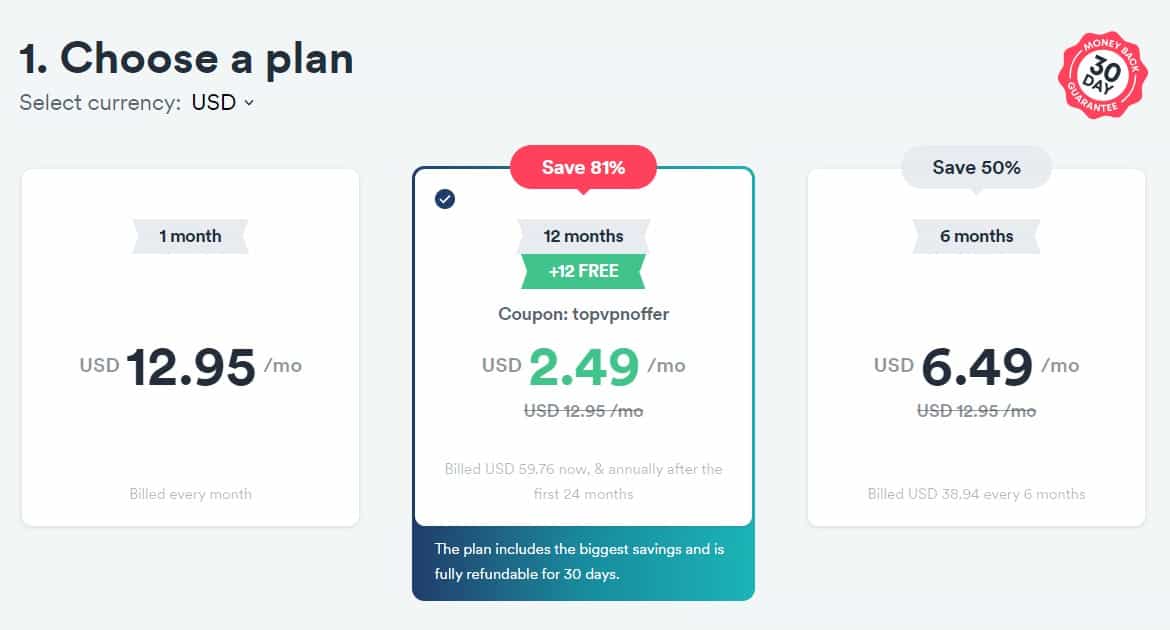 Surfshark has one plan, but offers discounts depending on your subscription length:

The one-year option offers great value for money with savings of 81 percent.

Surfshark offers a 30-day money-back guarantee on all plans which should give you ample time to decide if it’s the right service for you. Alternatively, if you sign up via the Google Play Store or Apple App Store, you can get a free seven-day trial.

Surkshark accepts a range of payment methods, including major credit and debit cards, PayPal, Amazon Pay, Apple Pay, Google Pay, Coingate, Alipay, and many country-specific payment methods. The ability to pay with bitcoin and other cryptocurrencies will be welcome news to more privacy-conscious users.

Here’s the latest and only Surfshark Coupon

Do I recommend Surfshark?

It turns out that Surfshark is very deserving of all the buzz and this provider has a lot going for it. It offers a reliable service and takes privacy and security very seriously. Plus, it’s great for streaming and even works in China. An unlimited number of simultaneous connections may be the tipper for some users.

The only small downside to Surfshark’s service is its inconsistent speeds on geographically distant servers. This might be a turnoff to those looking to download large files or stream on multiple devices at once while connected to faraway servers.

If you’re looking for the fastest VPN available, then you might want to consider ExpressVPN. This blows many of its competitors out of the water when it comes to speeds and it performs well in other areas. It’s great for unblocking geo-restricted streaming sites and can help you access the free web in China.

ExpressVPN has servers in 94 countries, far more than most other providers. Plus, it boasts excellent security and top-notch customer support. It’s also a great option if you’re planning to install a VPN on your home router as it comes with its own custom firmware. ExpressVPN is a bit pricier than Surfshark but it may be worth it for some users.