Split tunneling allows you to choose which devices, apps, or websites use a VPN connection and which use a direct connection. Find out about this handy feature and the best VPNs for split tunneling.
Stephen Cooper 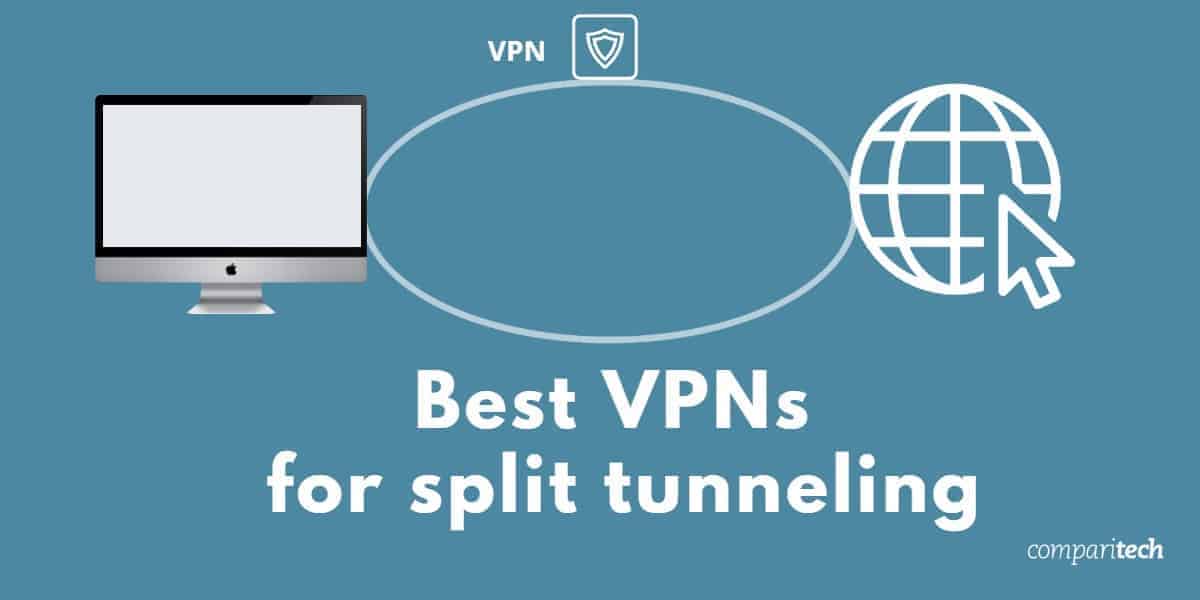 When you connect to a VPN, internet traffic travels between your device and the web via a proxy server that acts as a middle man. In many cases, you might not want all of your traffic to travel through the VPN server. Some VPN apps have a function called “split tunneling” that allows you to choose which apps, websites, or devices use the VPN and which use a direct connection to the internet.

We cover several providers in detail below, but if you only have time for a quick glance, here is our list of the best VPNs for split tunneling:

Though it’s possible to set up split tunneling on various operating systems even if it’s not built into your VPN, it’s far simpler to configure if it’s integrated into the VPN app. In this post, we reveal the best VPNs for split tunneling and how to get started with one.

There wouldn’t be much point in getting a VPN that includes split tunneling if other areas of the service are below par. We included a number of other criteria in our decision, including:

All of our selected VPNs for split tunneling below meet these standards.

ExpressVPN is the most thorough when it comes to the concept of split tunneling. This feature is available in the Windows and macOS desktop apps. In both cases, the settings area of the VPN app includes a split tunneling definition page.

ExpressVPN is one of the few providers that includes an app to install on your flashed wifi router. This app includes options to implement another type of split tunneling. You can specify which devices in your home will have all of their traffic channeled through the VPN and which will be left unprotected. The router split tunneling screen lists all recently connected devices and shows an on/off toggle next to each – the devices don’t have to be connected at the time of nomination.

Standard features on ExpressVPN include strong encryption, access to servers in 94 countries, an allowance of five simultaneous connections, and the ability to unblock Netflix and many other streaming services. Apps are available for Windows, macOS, Linux, Android, and iOS.

BEST VPN FOR SPLIT TUNNELING:ExpressVPN is our top pick and gives you the most options for split tunneling. Fast speeds and strong security complete the package. ExpressVPN gives a 30-day no-fuss money-back guarantee to all customers which means you can try it risk-free.

NordVPN apps are available for Windows, macOS, Linux, iOS, and Android devices. However, it’s the service’s browser extensions for Chrome and Firefox that will give you the ability to implement split tunneling. You can choose which websites use the VPN and which use a direct connection.

Note that in order to do this, you must leave the desktop app off and turn the browser extension on. All of your browser traffic will go through the VPN tunnel while all other apps on your device will be unprotected. Granted, this doesn’t offer a ton of flexibility for your split tunneling setup, but it might be suitable for some users.

NordVPN offers excellent security and the ability to unblock a wide range of streaming services, including Netflix. It offers access to servers in 62 countries and you get six simultaneous connections.

BEST BUDGET OPTION:NordVPN is a good choice for split tunneling if your budget is limited. Having the chance to use split tunneling as well as enjoying extra security features makes this VPN a bargain. NordVPN offers a 30-day fuss-free money-back guarantee with each subscription.

CyberGhost‘s split-exclude option lets you pick websites which websites should use the VPN and which should use a direct connection. If you prefer a website-based split tunneling feature in addition to an app-based one, this is the VPN for you.

The split-include option lets you decide which applications should be covered by the VPN. You can specify a different server location for each app that you nominate for protection.

This VPN gives access to servers in 90 countries. It unblocks a wide range of streaming services including Netflix. Apps are available for Windows, macOS, Android, iOS, Linux, Amazon Fire TV, and Amazon Fire Stick. You can connect seven devices at a time.

In the Settings menu, the Split Tunneling section of the Connection preferences leads to a list of all apps detected on the device. Any applications that you mark with a check box in this screen will be excluded from the tunnel.

IPVanish has some of the fastest speeds we’ve seen, which makes it great for streaming and torrenting. The company provides apps for Windows, macOS, Android, iOS, Linux Mint, Amazon Fire TV, and Amazon Fire Stick. The VPN can be set up manually on Ubuntu, Kali, and Fedora Linux, and select routers and set-top boxes. It’s a favorite among Kodi users.

IPVanish explains that its split tunneling feature was developed specifically to enable users to access services like Hulu and Netflix outside of the VPN connection. However, IPVanish is now able to unblock US Netflix (and some other streaming sites) from outside the country through the VPN.

IPVanish operates servers in 60 countries. Users get an allowance of ten simultaneous connections per plan.

ANDROID AND FIRE OS:IPVanish is a good choice for split tunneling on Android and Fire OS devices. Its fast speeds make it excellent for streaming and downloading and you can use it on 10 devices at once. IPVanish gives a 7-day money-back guarantee on each subscription.

PureVPN was one of the first VPNs to offer split tunneling. Although the company produces an app for Windows, macOS, Linux, iOS, and Android devices, its split tunneling capabilities can only be used on the Windows and Android operating systems. PureVPN uses a split-include configuration, which means you choose the apps you want to protect with the VPN. All other connections will go to the internet by a regular route and not be sent to the VPN server.

The service gives you access to servers in 141 countries. PureVPN is based in Hong Kong and is a good choice for those trying to access the internet in China. Its high speeds and privacy controls make it a solid option for torrenting and video streaming.

You can get a Kodi addon version of PureVPN and apps for Android TV boxes, Amazon Fire TV, and Amazon Fire Stick. The VPN can be installed manually on other set-top boxes and select routers. PureVPN is able to unblock a wide range of video streaming services from abroad including Netflix US and UK and BBC iPlayer.

LARGE SERVER NETWORK:PureVPN offers split tunneling feature in some apps and offers a reliable, secure service. It offers a 31-day money-back guarantee on each subscription.

Surfshark runs 1,000+ servers in more than 60 countries, which makes it easy to obtain a high-speed, low-latency connection, wherever you are. It’s capable of unblocking popular services like Netflix US and Amazon Prime Video from anywhere in the world, and as there’s no connection limit, you can secure every device you own with a single account.

This VPN’s split tunneling feature allows you to let specific apps or websites bypass the VPN entirely. There’s also 256-bit AES encryption, a kill switch (in all versions), and protection against IPv6, DNS, and WebRTC leaks, as well as a NoBorders feature that bypasses country-wide internet blocking. Surfshark doesn’t log any data that could identify you but if you’re concerned, you can sign up almost completely anonymously using cryptocurrency and a throwaway email address. Support is on-hand 24/7 over live chat in case of any issues.

COMPLETE PROTECTION:Surfshark has no connection limit, a no-logging policy, and cutting-edge security features, which means users can rest assured that their privacy is in good hands. A 30-day money-back guarantee is also included.

Hotspot Shield is a high-speed VPN with a network of over 3,000 servers in 70+ countries. This service not only unblocks some of the most popular streaming services (such as Netflix and BBC iPlayer) abroad, it allows you to watch free from lag or buffering, even at high resolutions. With up to five simultaneous connections allowed, you can protect all of your most commonly used devices with one account.

This VPN offers partial split tunneling functionality in that it allows users to bypass the VPN on certain websites. Your traffic is secured using DNS and IPv6 leak protection, a kill switch, and 256-bit encryption. As an added bonus, this service blocks ads and malware automatically. Hotspot Shield doesn’t keep personally identifiable information after your session ends so it can’t reveal details of your activities even if asked to. Support is available 24/7 over live chat.

Can I use a free VPN for split tunneling?

Although there are quite a few free VPNs available, we advise against using them. The facility for split tunneling is only available in very few VPNs and none of those specialized VPNs are free to use.

Free VPNs typically can’t get past location blocks on video streaming sites and they can really slow down your connection.

Be cautious of free VPNs because a lot of them are scams. One of the key services included in VPNs is encryption to prevent strangers from snooping on your internet activity. Many free VPNs don’t include any encryption at all. These are not only useless, but dangerous, because they give people a false sense of security.

Although some VPNs are free of charge, they are not charities. Some make money by forcing their users to watch adverts before they connect. Other sneakily inject adverts into the web pages that they channel. Some free VPNs even track the internet activities of their users and sell that information on to marketers. This is ironic because one of the main selling points of VPNs is that they are supposed to protect your privacy on the web.

All-in-all, you are better off avoiding free VPNs and opting for a paid alternative.

How can I use split tunneling?

Split tunneling boasts a number of advantages and is quite handy in a lot of situations:

Split tunneling and an always-on VPN

As mentioned, ExpressVPN’s router app enables you to choose which devices are covered by the VPN. This is ideal if you also have the VPN app installed on all of your mobile devices.

Ordinarily, it would be advisable to turn the VPN mobile app off during these times. But if you’re able to exclude specific devices from your router VPN, you can exclude the mobile devices and leave the VPN apps on those gadgets running. By this method, you will still be able to benefit from the wifi connection on mobile devices while at home, without having to worry about turning off the VPN.

What is inverse split tunneling?

Inverse split tunneling only protects specified apps or devices, and everything else is excluded by default.

Just think of the difference between a whitelist and a blacklist; it’s conceptually the same thing. The “list” might be a list of devices, apps,  websites, or even port numbers that connect—or do not connect—to the VPN.