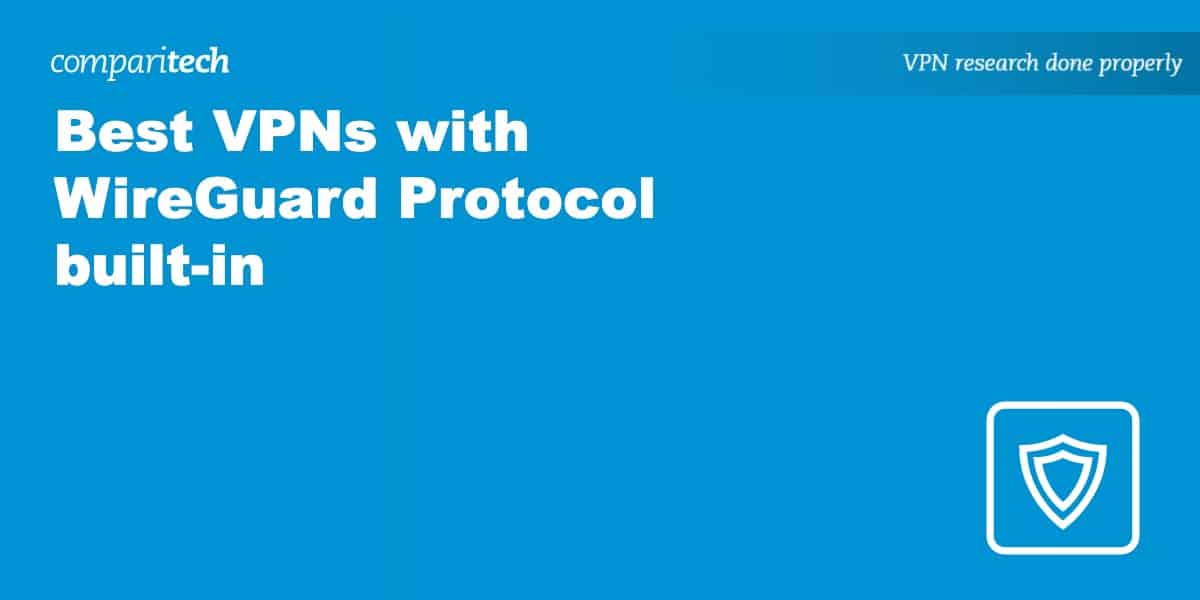 The WireGuard protocol is the latest trend adopted by several top VPN providers. WireGuard promises all the benefits of other popular security protocols with none of the drawbacks, it is:

Although WireGuard has been around for a few years, it wasn’t until recently that VPN providers started adding support for it to their apps and servers. We expect to see this trend continue and for more providers to add it in the near future. For now, we’ve compiled a list of the providers who already offer WireGuard. We’ll go into them in more detail, but if you don’t have time to read the full article, here’s a brief summary.

Here are the best VPNs with WireGuard:

NordVPN is offering a fully-featured risk-free 30-day trial if you sign up at this page. You can use the #1 rated VPN with Wireguard with no restrictions for a month—great if you're not sure about making a long-term commitment.

Best VPNs with Wireguard – at a glance

We’ve compared the most important features for the top VPNs here. Prefer to read the in-depth reviews? Start with NordVPN – our #1 choice for a Wireguard VPN.

In addition to having WireGuard, we expect the VPNs that make our list to meet all of our other quality standards. These include:

This is just an overview, but if you’d like to take a more detailed look at our VPN testing methods, you can find more information below.

Here are the best VPNs with WireGuard:

NordVPN uses its own modified version of WireGuard dubbed NordLynx. Although WireGuard is secure, the way it assigns IP addresses to users by default would require NordVPN to store some identifying user data on its servers. That would fly in the face of Nord’s strict zero-logs policy.

NordLynx gets around this drawback by using what Nord calls a “double NAT” system. It’s a bit technical, but suffice it to say that NordLynx allows you to use WireGuard without NordVPN storing any identifiable user data on its servers. The company explains:

The double NAT system creates two local network interfaces for each user. The first interface assigns the same local IP address to all users connected to a server. Once the secure VPN tunnel is established, the second network interface with a dynamic NAT system kicks in. Dynamic local IP addresses remain assigned only while the session is active and allows us to establish a secure NordLynx connection without storing any identifiable data on a server.

Ever since it added NordLynx, NordVPN has come out on top in all of our VPN speed tests. And by a wide margin at that. In addition to providing fast speeds and keeping no logs, NordVPN can access a huge range of region-locked content like that from Netflix, BBC iPlayer, Amazon Prime Video, and Hulu. Security is airtight thanks to strong encryption, leak protection, and a customize-able kill switch. Servers are available in around 60 countries, and support is staffed around the clock.

Using WireGuard on NordVPN is easy. Just go into the settings and select WireGuard from the list of protocols. Wireguard now comes built into NordVPN’s Windows, macOS, iOS, and Android apps.

BEST WIREGUARD VPN:NordVPN is our #1 choice. It’s the fastest VPN we’ve tested and comes with every feature a user could ask for including the extra secure NordLynx. If you disagree, take advantage of the risk-free, 30-day, money-back guarantee.

Surfshark comes at a great price and allows for an unlimited number of connections on a single account. That makes it a great option for a family or group of housemates to protect all their devices. Surfshark can access a wide range of streaming services, including Netflix, Amazon Prime Video, Disney+, and BBC iPlayer. This allows you to keep up with your home libraries while traveling abroad.

Surfshark uses WireGuard’s strong built-in security along with leak protection, a kill switch, and a zero-logs policy. It works well in China. Live chat support is available around the clock.

UNLIMITED CONNECTIONS:Surfshark simultaneously protects all your devices with WireGuard. It has over 3000 servers in 100 countries and comes with a 30-day money-back guarantee.

CyberGhost has been an established VPN provider offering WireGuard for a while now. It works with popular streaming sites like Netflix and Prime Video efficiently, and with impressive download speeds, you can be sure to stream in HD or 4K quality.

A standout feature of CyberGhost is its specialty servers that are optimized for popular internet activities. It has servers dedicated to torrenting, streaming, and gaming that produce the best performance for the task. It lets you connect up to 7 devices simultaneously and has apps for almost every platform you could ask for.

CyberGhost operates a rapidly growing network of around 8000 servers globally and uses AES encryption, offers a kill switch, and includes DNS leak protection and a no-logs policy to secure your privacy.

IPVanish is a top provider for those looking for a VPN with Wireguard support. It accesses popular sites like BBC iPlayer, Prime Video, and Netflix effortlessly and offers excellent connection speeds across over 2000 servers worldwide. It allows unlimited connections and apps for most operating systems, which is ideal for families with many devices.

24/7 live chat is available to all subscribers alongside email support. It sticks to its 30-day money-back promise, and canceling is simple if you aren’t 100% satisfied.

AtlasVPN is a reasonably new entrant to the VPN space, but it brings WireGuard support to the table, which makes it stand out above a lot of the competition. While it has a smaller server network than its competitors, AtlasVPN produces lightning-fast speeds across its 40+ server locations capable of delivering HD streaming.

Nord Technologies now owns AtlasVPN, and they operate their HQ from Panama, which falls outside any internet surveillance programs. It doesn’t collect logs and uses AES encryption to protect your connection. It does so alongside built-in breach monitoring, a malware and ad blocker, and tracker erasing tools.

All plans include an unlimited connection limit with apps for all major platforms. Plus, you’ll have a 30-day cooling-off period to see if the VPN is for you.

Private Internet Access is a popular option for Wireguard seekers as it produces lightning-fast streaming and gaming speeds on any of its 35,000+ servers. It works with streaming services such as Netflix and Hulu without effort, and if your connection speed isn’t as fast as you’d like, you can tailor your encryption level to further increase performance.

If you’re looking to use PIA on multiple devices, it includes a generous limit of up to 10 devices. Its apps are available on desktop and mobile, and the setup is straightforward.

24/7 customer support is available, making canceling straightforward via live chat. Try PIA for a month, and cancel for a refund if it’s not the right fit.

StrongVPN added Wireguard to its apps, and like NordVPN, its speed improved a great deal. StrongVPN reliably works with Netflix US, Hulu, and Disney+, allowing you to watch your home streaming libraries while traveling abroad. We’ve had some success with Amazon Prime Video and BBC iPlayer as well, though it’s not as consistent.

StrongVPN emphasizes privacy and security. It comes with a kill switch and strong encryption. This service is a popular choice among people living in China, enabling access to blocked websites and apps.

Wireguard comes baked into StrongVPN’s Windows, macOS, iOS, and Android apps. If you prefer setting up a manual connection, StrongVPN’s website has a handy generator where you can create a custom Wireguard configuration. The config generator should work for any other devices that support Wireguard. but if you have any problems, support is available 24/7.

WIREGUARD ON ANY DEVICE:StrongVPN supports Wireguard on all of its apps, which are fast, secure, and easy to use. It comes with a 45-day money-back guarantee.

Perimeter 81 is a great choice if you’re looking for a Wireguard VPN for your business. Organizations can deploy private VPN servers that employees can connect to from anywhere. All staff accounts can be managed from a single online dashboard, allowing management to decide which employees have access to files, apps, and other resources.

Business-oriented features include network segmentation, site-to-site VPNs, and cloud VPN with easy scalability. You can deploy your own VPN or use one of Perimeter 81’s more than 700 public servers.

WIREGUARD FOR BUSINESS:Get all the benefits of a Wireguard VPN for your business with Perimeter 81. It comes with a 30-day money-back guarantee.

What makes Wireguard VPNs so good?

Are there any free VPNs with Wireguard?

We don't know of any free VPN providers that currently use Wireguard. At any rate, we recommend avoiding these services altogether. Most free VPNs have strict data caps, bandwidth limits, and waiting queues, which results in slow and frustrating service. Plus, Free VPNs tend to fall short of the security and performance of their paid counterparts. Many log user behavior and activities to generate ad revenue, violating user privacy.

What other VPNs will add Wireguard?

We expect to see Wireguard adopted by many VPNs in the near future. Recently, PrivateVPN was reported to be among the VPNs seeking to add Wireguard support to their infrastructure.

How do I set up a Wireguard connection manually?

Operating systems don't yet have built-in support for Wireguard because it's so new. But if you don't want to use a VPN provider's app, you can use a third-party Wireguard client. Your VPN provider might or might not support third-party clients. If it does, you can probably download Wireguard configuration files directly from their website. StrongVPN offers this option.

Is it safe to use a VPN without WireGuard?

Not all VPNs support WireGuard and even those that do tend to have multiple VPN protocols for you to choose from. While WireGuard offers good security, the likes of OpenVPN and IKEv2 are also perfectly safe for you to use. Indeed, it's worth knowing that some of our top-rated VPNs, such as ExpressVPN and PrivateVPN, don't offer WireGuard, yet still provide an excellent service.