7 Best VPNs for connecting multiple devices at the same time

Are you looking for a VPN to cover all the devices in your household? In this guide, we reveal the best VPNs for multiple devices and exactly how many devices they cover.
Paul Bischoff TECH WRITER, PRIVACY ADVOCATE AND VPN EXPERT 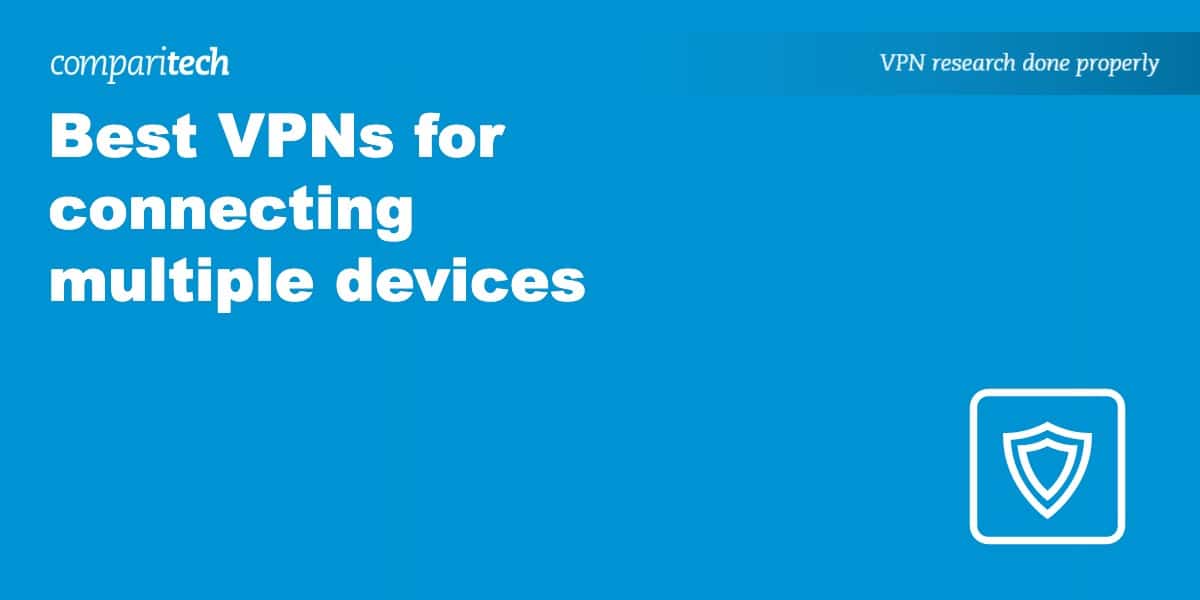 For a family, group of housemates, or small office–or if you just own a lot of gadgets–you’ll want a VPN that allows you to connect multiple devices at the same time. Many VPN providers only allow a single connection at a time, which means kicking off one device to make room for another.

Maybe you need to connect a phone and laptop at the same time, or two people want to use the VPN at the same time to stream Hulu or Netflix. Perhaps everyone in your office should be on a VPN, but you don’t want to buy separate subscriptions for everybody. In scenarios like these, you’ll want multiple simultaneous connections. VPN providers offer anywhere from one to six connections at the same time.

This article will tell you everything you need to know about multiple device VPNs. Don’t want to read the whole thing? Here’s a quick summary of the best VPNs for connecting multiple devices at the same time:

Best VPNs for connecting multiple devices – at a glance

We’ve compared the most important features for the top VPNs here. Prefer to read the in-depth reviews? Start with NordVPN – our #1 choice for connecting multiple devices.

Below we’ve curated a list of the best VPNs for multiple simultaneous connections. For each provider, we’ve divided the cost of the subscription by the number of connections so you can get an idea of how much you’ll be paying per month, per device.

NordVPN is offering a fully-featured risk-free 30-day trial if you sign up at this page. You can use the VPN rated #1 for multiple devices free from any restrictions for a full month. This means you'll be able to try it out and see if it's right for you first-hand.

There are no hidden terms or conditions—just contact support within 30 days if you decide not to stick with NordVPN and you'll get a full refund. Start your NordVPN trial here.

NordVPN is our top choice. Its standard package nets you a whopping six simultaneous devices. When you combine that with the already-low prices, the price drops to less than a dollar per month per device with a one-year plan. Apps are available for Windows, Mac OS, Linux, iOS, and Android. It’s the fastest VPN we’ve tested and operates a network of thousands of servers around the world. Security is extremely strong and NordVPN is a zero-logs provider.

Surfshark is a low-cost provider that offers stellar all-round VPN coverage. One of the standout features of this service is that it doesn’t limit the number of connections so you can connect as many devices as you like under one subscription. Apps are available for Windows, Linux, MacOS, iOS, and Android. Surfshark has around 3,000 servers in over 60 countries. It’s known for its range of security extras, strict no-logs policy, and excellent unblocking ability.

BEST BUDGET VPN:Surfshark offers great value for money. It has decent speeds and a strong suite of security features, and unblocks restricted content with ease. Plans include a 30-day money-back guarantee.

ExpressVPN used to cap its device limit at three, but it now allows you to connect up to five devices at a time. This provider offers beginner-friendly apps for Windows, Linux, MacOS, iOS, and Android. It operates a large network of more than 3,000 in 94 countries. ExpressVPN is adept at bypassing blocks, uses strong encryption, and doesn’t log user-identifying data.

GREAT ALL-ROUNDER:ExpressVPN is a solid choice for many tasks. It takes user security seriously, can unblock a range of content, and allows up to five simultaneous connections. 30-day money-back guarantee.

CyberGhost’s standard subscription allows up to seven simultaneous connections. You’ll find easy-to-use apps for Windows, Linux, MacOS, iOS, and Android. CyberGhost operates some 6,000 servers, and you can choose which is best for you based on either location or how you use the VPN, such as securing privacy with Netflix. CyberGhost uses strong encryption and adheres to a no-logs policy.

GREAT VALUE:CyberGhost is a great budget choice. Strong on privacy, fast speeds and reliable buffer-free connections. We found it easy to set up and use. Works well with most streaming sites. 45-day money-back guarantee.

PrivateVPN lets you connect six devices at one time on a single account. This relatively young VPN provider uses top-notch encryption and doesn’t store any logs. It’s great for unblocking pretty much everything including Hulu, and BBC iPlayer. The server network is smaller than its rivals, but you should have no problem finding a fast connection. Apps are available for Windows, Linux, MacOS, iOS, and Android.

GREAT SPEED:PrivateVPN is consistently reliable. Good for general purpose use and HD Streaming. Could do with having more servers to chose from. 30-day money-back guarantee.

IPVanish offers a very competitively priced plan and boasts a huge array of servers. If you want a true zero-logs service that can also change your IP address at a specified interval, this is the VPN for you. Apps are available for Windows, Mac OSX, iOS, and Android.

FAST AND RELIABLE:IPVanish has a large network of servers. Uncongested network achieves good speeds. Strong security and privacy features. Could do with having live customer support. 7-day money-back guarantee.

VyprVPN offers three tiers with two, three, and five simultaneous connections. Note that these are the prices for their consumer plans, but VyprVPN also has business plans if you need more than that. The single-month price is pretty steep, but if you pay annually it cuts the price in half. VyprVPN is one of the only providers that owns all of its own physical servers instead of renting them out from a third party.

INDEPENDENT NETWORK:VyprVPN is user friendly. Good speeds and uptime as all servers are owned by VyprVPN. Not the cheapest option. 30-day money-back guarantee.

Comparitech strives to publish the most comprehensive and useful VPN reviews and recommendations on the web. To do that, we put each VPN through a range of tests, day-to-day use, and expert analysis. When it comes to VPNs that support a lot of simultaneous connections, we specifically look at:

This is just a summary of our full review methodology. Find out more about how we test VPNs here.

How to use a VPN with multiple devices

If this is your first time setting up a VPN you’ll be happy to know it’s a very simple process. Just follow our steps below and you’ll have all your devices connected through a VPN in no time.

Here’s how to set-up a VPN on multiple devices:

Connect unlimited devices to a VPN with a wifi router

While all of the above VPN providers let you connect multiple devices at the same time, there are times when you may need even more. If that’s the case, consider setting up a VPN on your home or office wifi router instead of on individual devices.

Configuring a VPN on a wifi router only uses one of your available connections, but routes the traffic of all the devices connected to it through the VPN. This works with as many devices as your router and internet bandwidth can handle, including ones that don’t support VPN apps. Just make sure you pick a fast VPN server!

The exact process varies depending on your router’s firmware and your VPN provider’s specifications. Check your provider’s website for tutorials on how to configure your VPN on your firmware version. If you can’t find the firmware listed, consider flashing new firmware on the router to replace the built-in one.

Alternatively, you can also turn most laptops into virtual routers and connect devices to that. After setting up the virtual router and connecting through a normal VPN app, all the devices connected to your new laptop wifi hotspot will be routed through the VPN. We have instructions for how to set up virtual routers on Mac OSX and on Windows PC (scroll down to second subtitle).

Does your IP address change when you use a VPN?

Yes, a VPN hides your IP address, which is the unique identification number that identifies where you are. When using a VPN to hide an IP address and access content such as streaming services or region-restricted websites, your IP address will change to one allocated by your VPN provider.

Can I use a free VPN subscription to get multiple device connections?

Possibly, but we wouldn’t recommend it. Although most free VPNs don’t expressly allow for multiple simultaneous connections, many of them also don’t require account registration. That means you can just install the free VPN on more devices without restriction. That being said, you should think twice about a VPN that doesn’t charge.

If the free VPN does require account registration, chances are you’ll have to pay more for extra connections.

Do I have to connect all my devices to the same VPN server?

No. Each device with the VPN app installed can be connected to a different server.

Should smart devices also be connected to a VPN?

Connecting smart devices to your VPN is a great way to keep them secure. Smart devices often lack sufficient encryption and authentication, which can create backdoors into your home’s network. A VPN can secure all of your devices’ connections to make them less vulnerable to internet-based attacks.

Note, however, that the VPN might cut off your smart devices from your local network, making them inaccessible to other devices in your home. Be sure to choose a VPN with an option to allow local networking if this is a concern.