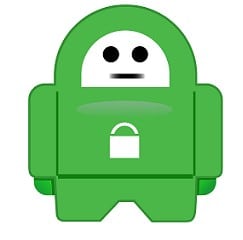 Private Internet Access, or PIA for short, is a veteran among VPN providers. It brands itself as the “world’s most trusted VPN,” and as the name implies, it emphasizes privacy above all else.
But all VPNs claim to protect your privacy these days. What makes Private Internet Access stand out? Can it do anything that NordVPN, Surfshark or ExpressVPN can’t?

In my 2022 Private Internet Access review, I dug into the latest versions of PIA apps on both mobile and desktop to find out:

I’ll discuss all of that and more in this review.

Over the last few weeks, I used Private Internet Access to torrent, stream, secure public wi-fi, and prevent my internet service provider from seeing what I do online.

I summarized my experience with PIA below, but you can read the full review for an in-depth look into what makes this VPN service such a hit with customers.

You can also read more on the criteria I used to test PIA and our broader VPN testing methodology here.

Private Internet Access is a lightweight VPN that users can extensively customize to their needs. It offers excellent security and decent speeds, but falls a bit short when it comes to unblocking region-locked content or bypassing government censorship in places like China. I recommend it to torrenters and other users who use a VPN to maintain privacy rather than those who want to stream video and unblock content.

How does Private Internet Access compare to other popular VPNs?

Here’s a summary of what I liked and didn’t like during my time with Private Internet Access.

I’ll go into more detail about each of these points below.

PIA is above average in terms of download speed. I was able to stream 4K video and video conference in HD when connected to nearby servers. I never had issues with poor quality video or buffering. 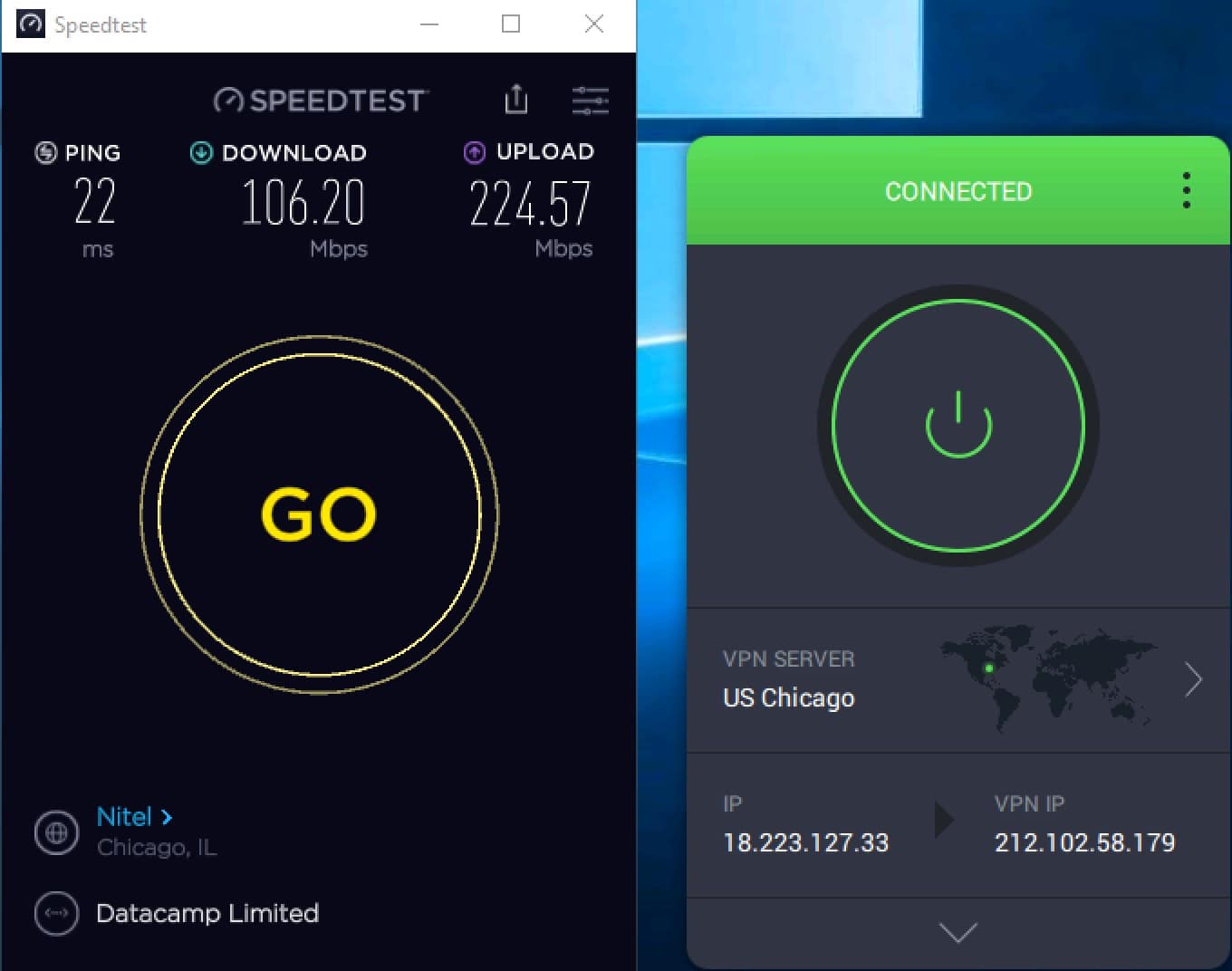 Private Internet Access operates 3,386 servers in 42 countries. Most of its rivals have servers in 60 or more countries, so it’s on the lower end, but there are plenty of locations for most users.

We tested international servers in North America, Europe, and Asia. Here are the average speeds for servers in each region:

Nearby servers were suitable for online gaming without adding too much ping time. The nearest servers have a latency of about 20-25 ms, which when gaming isn’t a detrimental amount. This is dependent on where the nearest server is, but I was able to play fast-paced games like Brawlhalla and Rocket League without crippling lag.

Note that these tests can only serve as a general indication of the performance you might see and cannot be considered definitive. The inherent volatility of the internet adds a significant factor of randomness. Users with faster connections will likely see larger discrepancies in speed.

A single subscription allows me to connect up to 10 devices at once. PIA makes apps for the following devices: 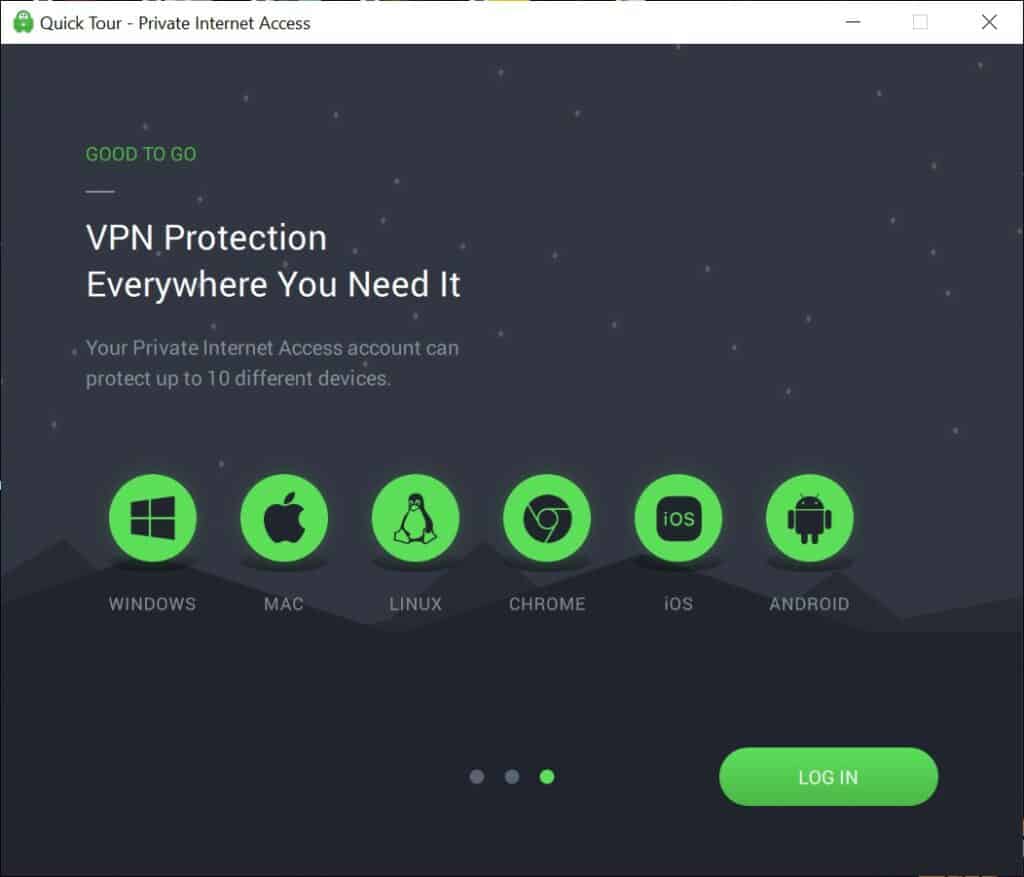 The apps are very lightweight, meaning they work well even on low-powered devices. 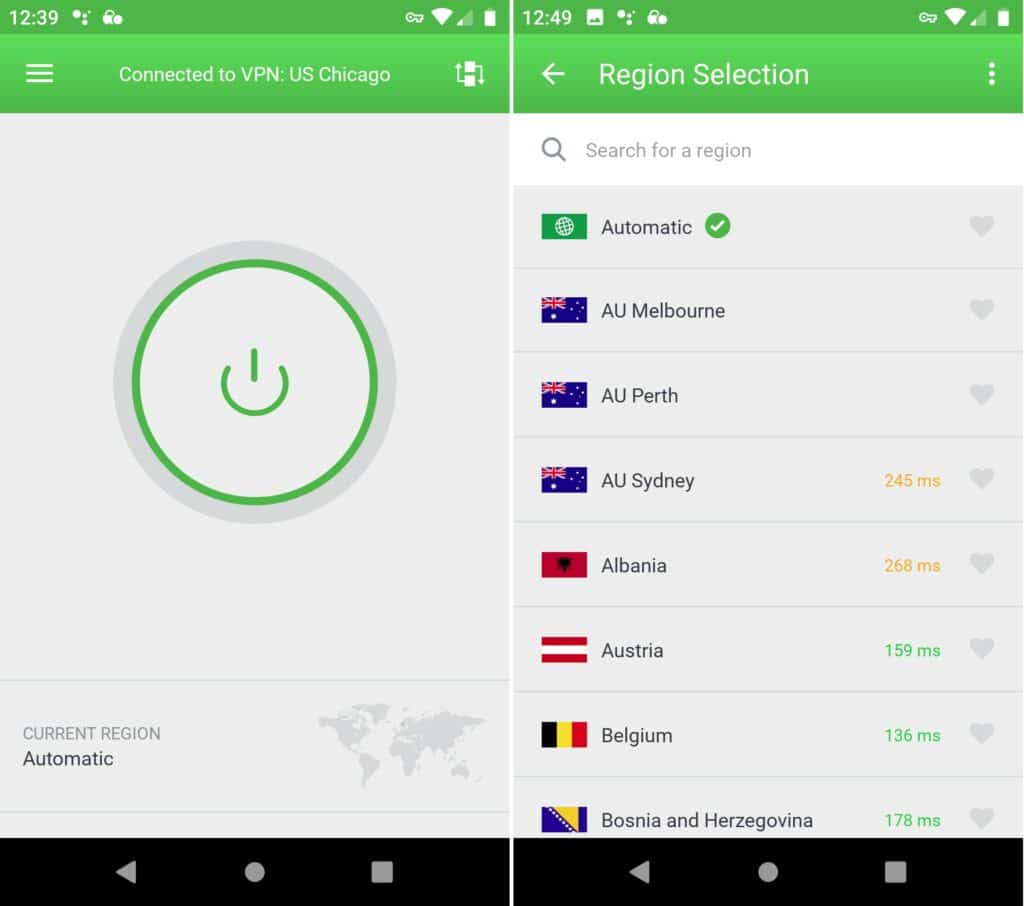 Servers can be ordered alphabetically or by latency (ping time). You can “heart” your favorite servers or find them through the search bar.

PIA is one of the only VPN providers to offer a full app for Linux users, complete with a graphical user interface. The few other providers that even bother making Linux apps usually settle for command-line interfaces.

Users can customize the layout of their apps. Elements of the interface can be reordered or removed entirely. There are also dark and light themes to choose from.

While the PIA’s app design could be easier to navigate, it does boast a few cool features that you won’t find on many other VPNs. These include:

Manual setup without an app is also possible. You can get OpenVPN configuration files directly from PIA’s website. This is handy if you want to set up the VPN on a device that doesn’t have an app, such as a wi-fi router – which PIA does support.

Though not very explicit through its website’s marketing, digging through its support section reveals that PIA supports OpenVPN on the following routers:

If you’d like more information on setting up a VPN connection on a router, check out our guide on VPN routers.

Yes, I used Private Internet Access to stream Netflix US and UK. I was also able to access BBC iPlayer over a UK server.

It did not work with Hulu or Amazon Prime Video (US), however.

So PIA isn’t the most adept at accessing region-locked content, but it isn’t terrible.

For Kodi users, PIA works on both Android boxes and OpenELEC devices. It’s compatible with all Kodi addons.

You can check out our recommended VPNs for streaming.

Yes, it does. PIA has long been a favorite among torrenters. The apps include several features that P2P filesharers will find useful.

You can have a look at our recommended VPNs for torrenting.

After signing up, PIA sent me a username and password in an email. This is separate from the email address and password I used to register my account. This can be a bit inconvenient—it’s one more password I have to remember, and I don’t get to choose what it is—but it adds a layer of privacy. If my VPN login details are somehow compromised, it won’t affect my account.

In the apps, PIA’s security can be customized to a great extent, which is not something you’ll find in many VPNs these days. In addition to the kill switch, ad blocker, and private browser options discussed above, some other notable tweaks include:

Private Internet Access is based in the USA, which might discourage some users wary of spying by national intelligence agencies. 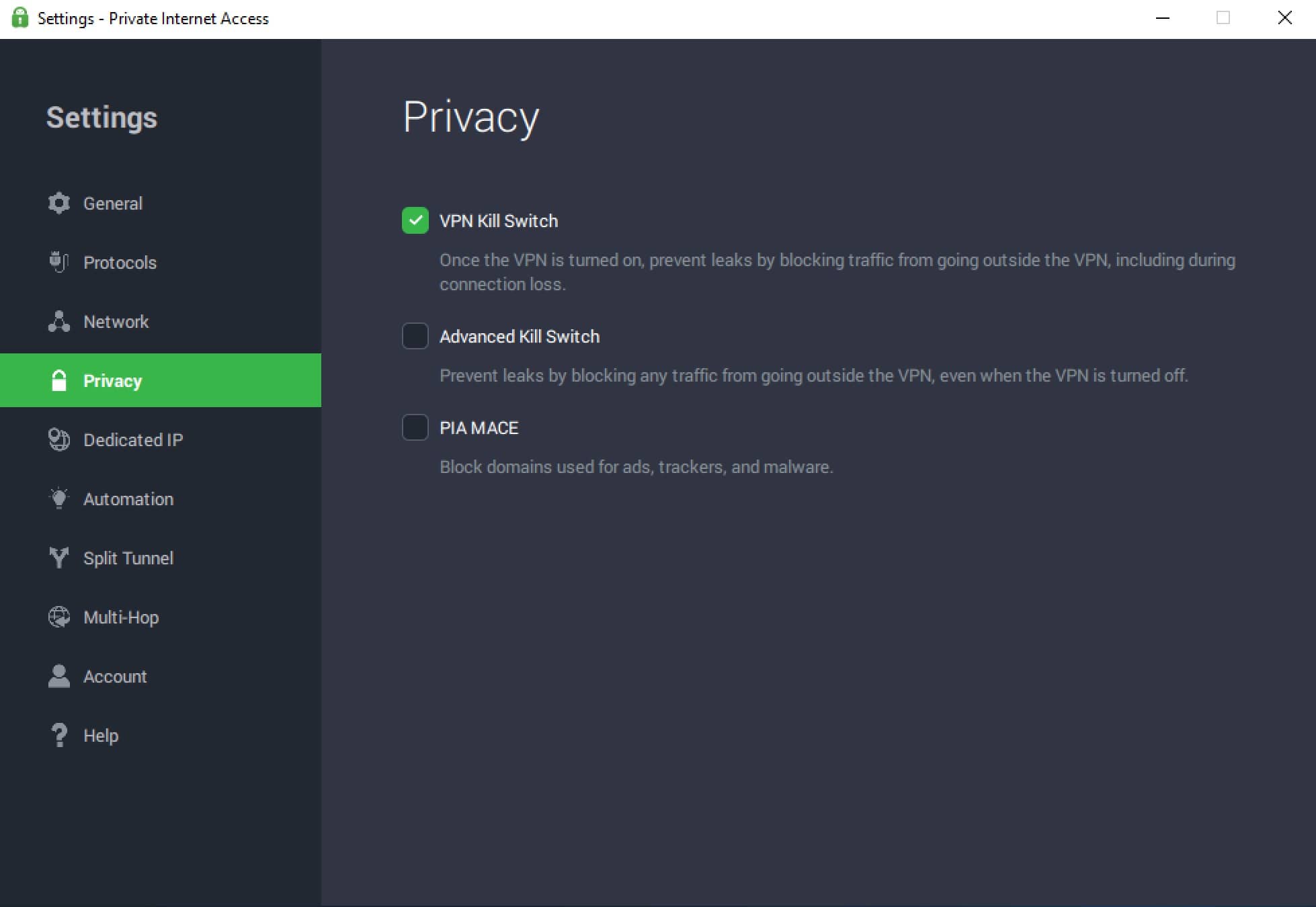 PIA keeps no logs of what you do while connected to the VPN, though, nor any metadata such as timestamps and IP addresses. Minimal personal information (email address and payment details) is collected when you sign up for service and billing purposes. 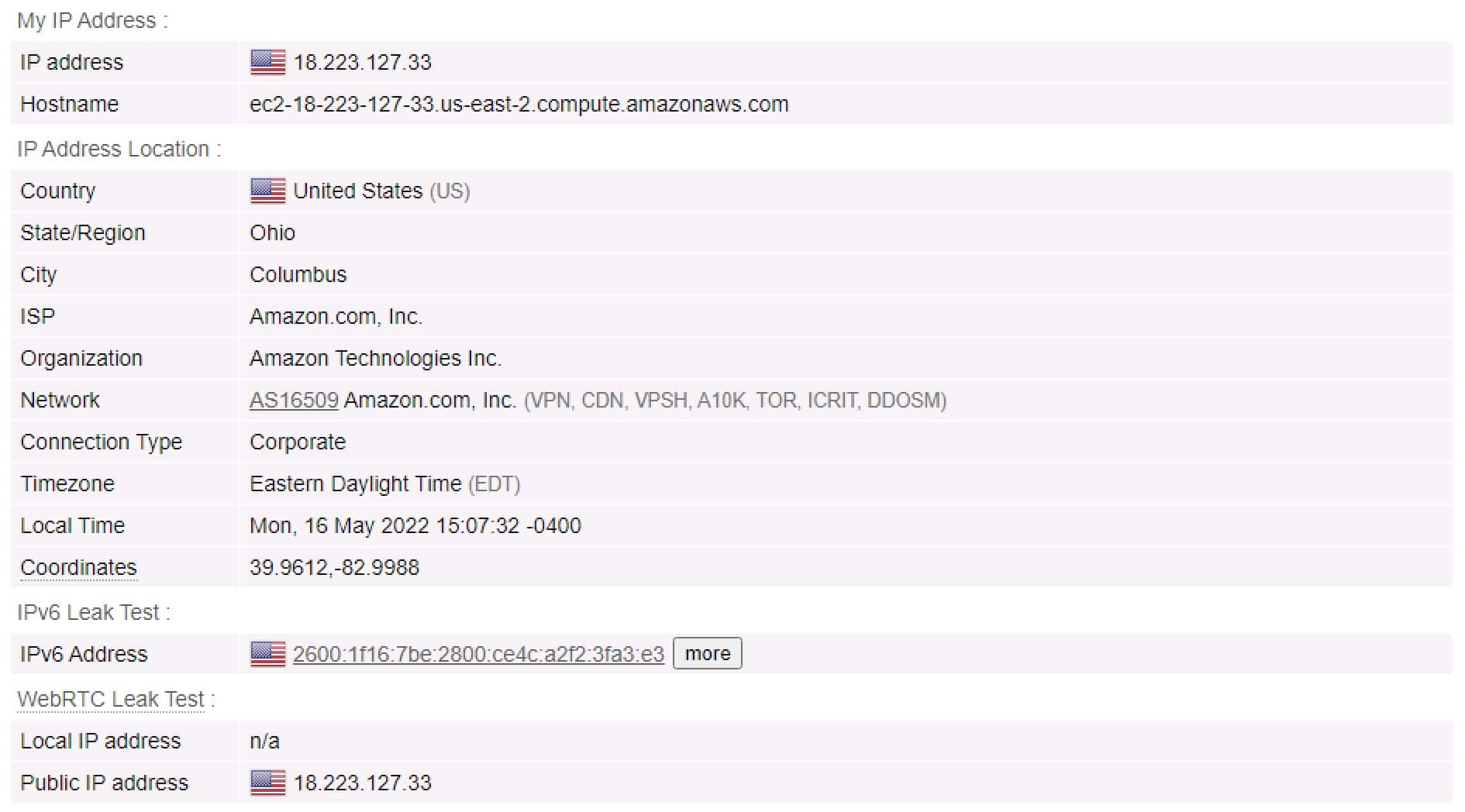 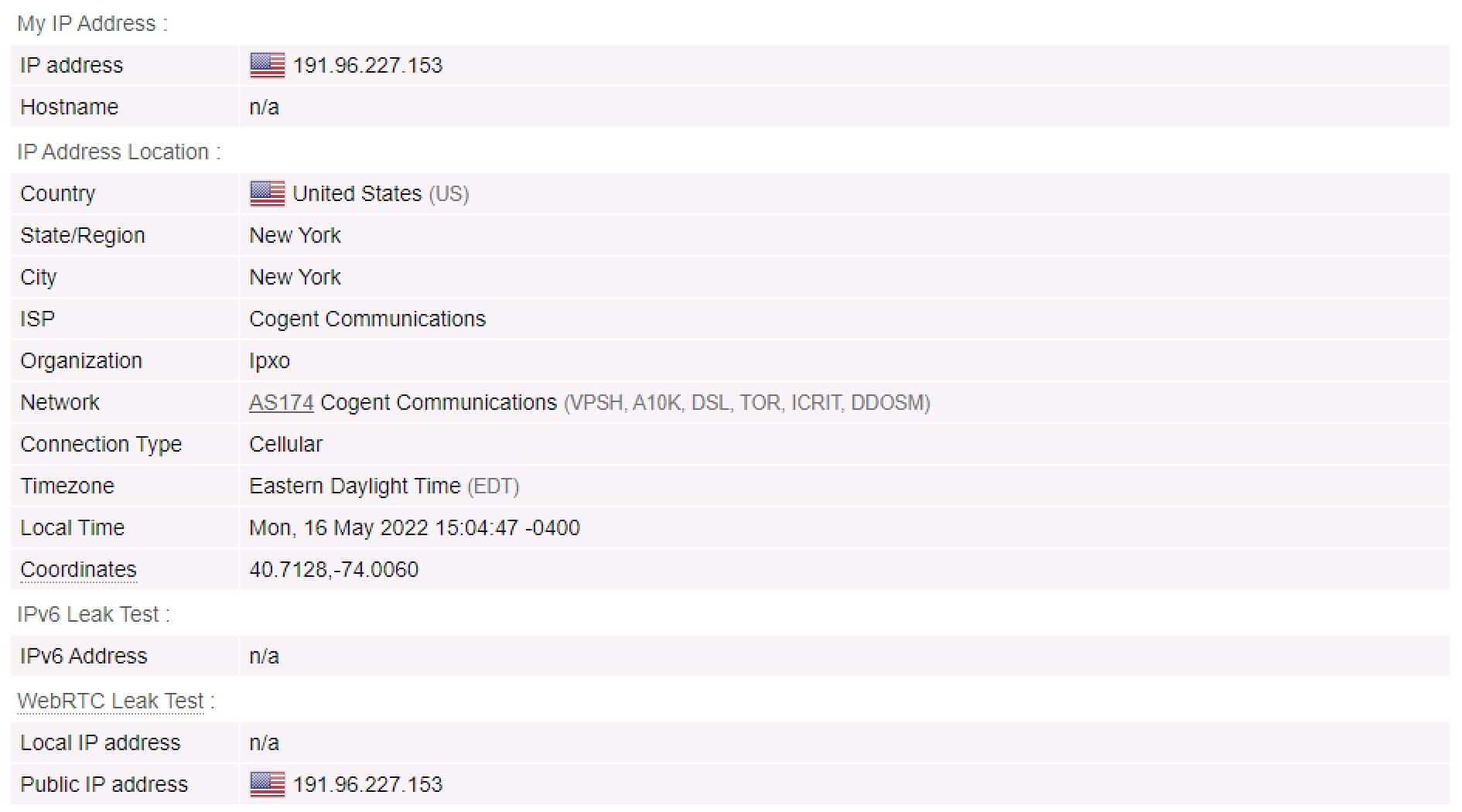 I found no IP, DNS, or WebRTC leaks when connected to PIA. That means my real IP address is never revealed to third parties.

PIA does not work reliably in China. Furthermore, it was temporarily blocked in Hong Kong in September 2019. If you’re looking for a way to bypass the Great Firewall while in mainland China, I would look elsewhere. The same goes for other countries where VPNs are often blocked, like the UAE and Iran.

ExpressVPN is a good alternative. To learn more about connecting to a VPN from China, have a look at our recommended VPNs for China.

It took about thirty seconds to connect to a live chat support agent through PIA’s website on a weekday evening. The agent responded quickly to my questions, though the initial answer I got was wrong and the agent quickly issued a correction when I typed in a follow-up question. I asked whether the snooze feature was available on iOS as I couldn’t find the setting in the app. All things considered, the support I got was fine. 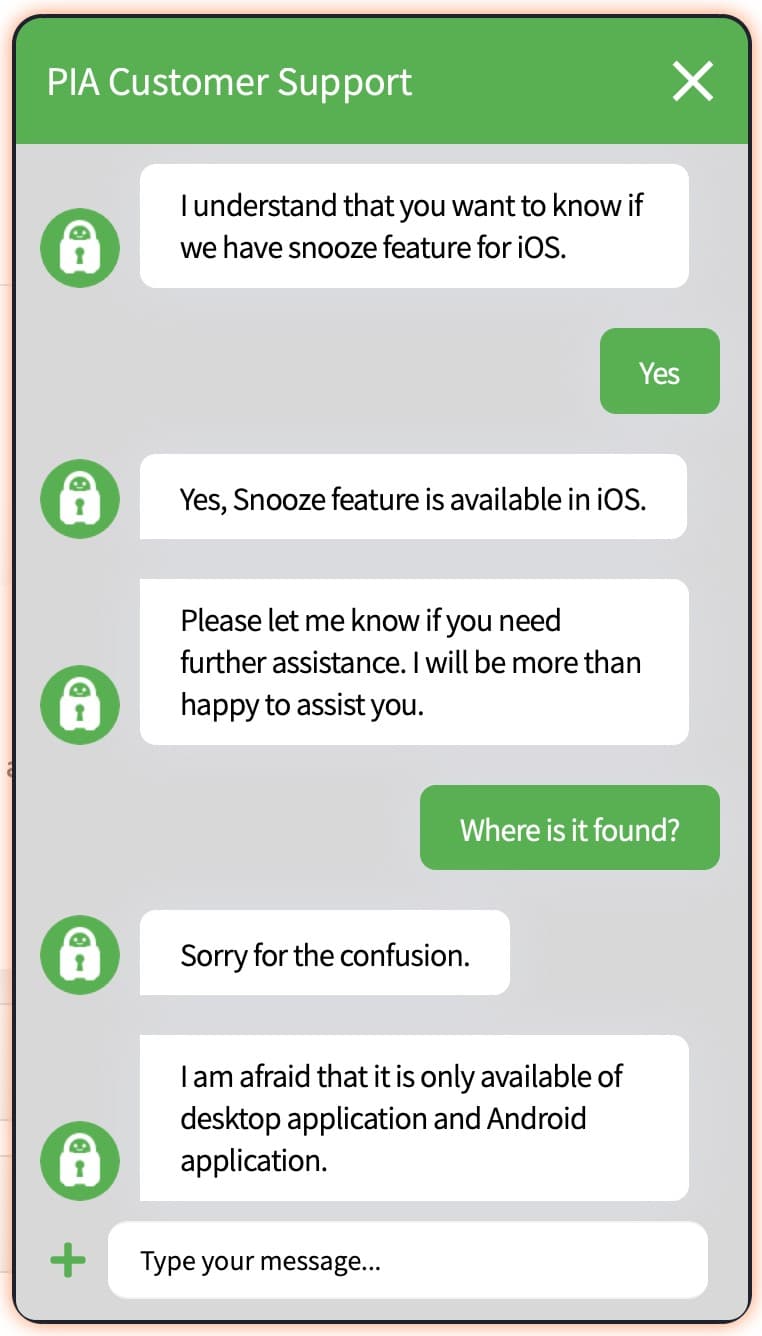 Private Internet Access has a blog and plenty of support materials to help you troubleshoot issues and keep up to date with the service. It’s also one of the only VPN providers to run its own forum where customers can post questions and comments to the developers and other users.

On the downside, much of the material in the blog posts and forums is out of date. That made it difficult in some cases to find clear and accurate answers to my questions.

A debug logging mode in the apps can be useful when troubleshooting connection issues. Instead of trying to describe the problem to customer support, I can enable this mode and then hand over the debug log so technicians can quickly pinpoint the issue. Just remember to turn it off when you’re done to prevent unnecessary logging.

Every plan comes with a 30-day risk-free money-back guarantee.

PIA accepts several forms of payment including credit cards, PayPal, Amazon Pay, and several anonymous cryptocurrencies including Bitcoin, Zcash, and Ethereum. You can even use gift cards from Starbucks, Walmart, Best Buy, and more.

If you use a VPN more to protect your privacy and less for streaming, PIA is a solid choice. It’s great for torrenters, Linux users, and securing unprotected wi-fi hotspots. I wouldn’t recommend it for people who want access to a lot of different streaming services or those living in China.

PIA is well-suited to privacy-conscious, tech savvy users who want to be able to customize their VPN security and network settings. But it’s not for everyone.

NordVPN is another great option with excellent security and faster speeds. It’s great for unblocking region-locked streaming services and also works in China.

Below you’ll find the criteria used to assess the VPNs we review. It’s essential to be consistent across the board so that our reviews are reasonably objective and that we’re not comparing apples to oranges. For that reason, we want to publicize our criteria.

The above represents a high-level view of our methodology. If you’d like more details, have a look at our full VPN testing methodology. This data-driven approach helps us better understand the services to recommend the right VPN to the right users.