How to watch Globoplay from anywhere with a VPN

Traveling outside Brazil but still want to be able to watch Globoplay? We’ll explain how you can use a VPN to unblock geo-restricted content and stream Globoplay from anywhere.
Mark Gill TECH JOURNALIST, VPN AND PRIVACY SPECIALIST 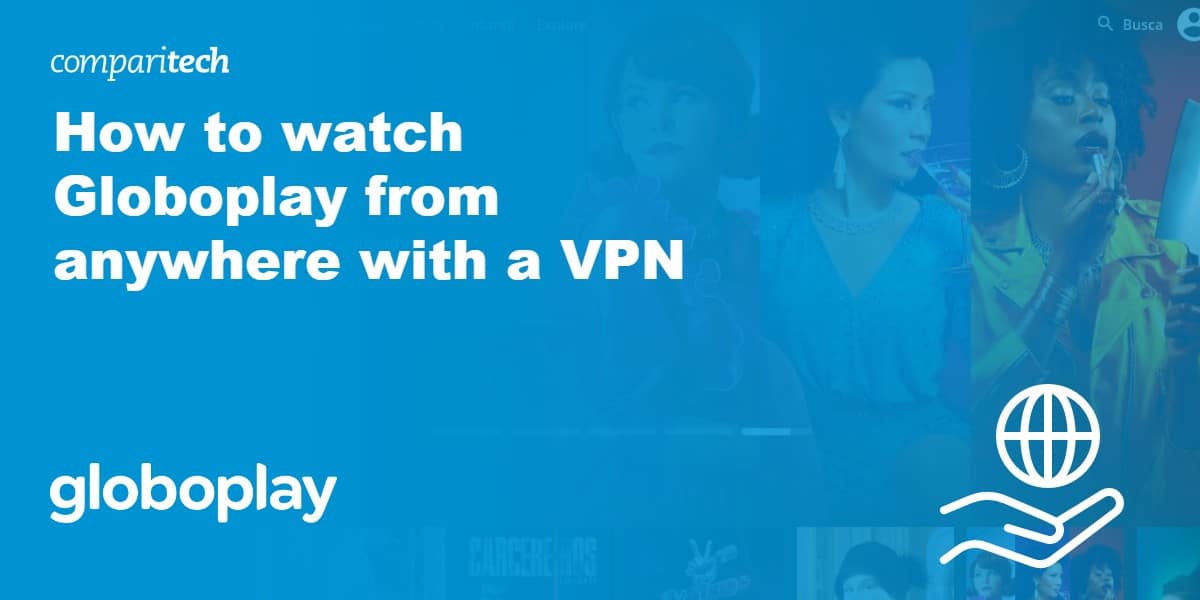 Trying to watch Globoplay in the US or anywhere else outside abroad? Unfortunately, this Brazilian subscription VoD service is only available in Brazil. If you try to stream its content while traveling abroad, you’ll find it to be region-locked. This is most likely due to licensing laws but fortunately, you can bypass these geographic restrictions by using a Virtual Private Network (VPN).

A VPN makes it look as if you’re browsing from Brazil, even if you’re in another country entirely. It does this by routing your internet traffic through an encrypted tunnel to servers in another location. By connecting to a VPN server in Brazil, you’re provided with a Brazilian IP address. Since Globoplay uses this to determine your location, you should be able to access Globoplay from anywhere once the VPN is active.

How to watch Globoplay from abroad with a VPN

Not sure how to go about using a VPN? It’s actually very simple. All you need to do is follow the step-by-step instructions below and you’ll be good to go.

Here’s how to watch Globoplay online from anywhere:

Not sure where to start? There are obviously many different VPNs to choose from. However, many are lacking when it comes to server speed or security, for example. We came up with a list of key criteria that a VPN must meet in order to be selected:

Looking to get started straight away? Here’s a summary of the best VPNs for watching Globoplay abroad. Note that we also provide more in-depth reviews of each further below.

Here’s our list of the best VPNs for watching Globoplay abroad:

NordVPN ticks all of the boxes for what most people look for in a VPN. In particular, it has very fast and reliable servers. This makes it a particularly safe choice for streaming the likes of Globoplay (it also unblocks Netflix and BBC iPlayer, among others). It has a large network of more than 5,500 servers, 20 of which are located in Brazil. NordVPN offers unlimited bandwidth which means you can browse, stream, and torrent as much as you want.

This VPN provides excellent support which is available 24/7 via live chat and email. However, you shouldn’t have too much trouble as the apps are easy to use. Users can even select specialty servers such as those optimized for P2P and Double VPN connections. There’s no shortage of security features either with 256-bit AES encryption, DNS and IPv6 leak protection, and a kill switch all working to keep you safe online. NordVPN is headquartered in Panama, a country with no mandatory data retention laws. Regardless, it operates a strict no-logs policy.

Connect up to six devices at once via NordVPN’s apps for the following: Windows, Mac, Linux, Android, iOS, and Android TV. Browser extensions are available for Chrome and Firefox. You can also use NordVPN with select routers but manual setup is required.

Surfshark is a good choice for families as it allows unlimited simultaneous connections per account. It also has a large network consisting of more than 3,000 servers. These servers are located in 65 countries including Brazil. With Surfshark’s strong unblocking ability, you can access the likes of Globoplay and Netflix. You shouldn’t encounter lag or buffering because this VPN doesn’t place any limits on your bandwidth.

The Surfshark apps are very well designed, making them easy to navigate. There are options to connect to the fastest available server as well as the nearest country to your location. MultiHop (Double VPN) servers are available for an extra layer of encryption. Further security features include 256-bit AES encryption, a kill switch, and DNS and IPv6 leak protection, plus built-in ad-blocking and malware-scanning. Surfshark is also a strict no-logs VPN with 24/7 live chat and email support.

You can secure all of your devices with Surfshark apps for Windows, Mac, Linux, Android, iOS, and Amazon Fire TV. Chrome and Firefox browser extensions are also available for download. Use of Surfshark with wireless routers requires manual installation.

ExpressVPN is worth considering, particularly if you’re looking to access geo-restricted websites from a variety of countries. This VPN has over 3,000 servers which you’ll find in 94 countries globally. Better still, it provides very fast server speeds while unlimited bandwidth means its connections are highly consistent. Servers in Brazil means you’ll be able to access Globoplay abroad while ExpressVPN also works well with many versions of Netflix.

This VPN has particularly good customer support. Available via live chat and email, you’ll receive fast, knowledgeable replies. The apps are user-friendly and let you connect up to five devices at the same time. Once connected, all of your data is secured with 256-bit AES encryption. There’s also a kill switch and protection from DNS, IPv6, and WebRTC leaks. ExpressVPN doesn’t keep any logs by which you can be identified, protecting your privacy.

Signing up with ExpressVPN means you’ll have access to apps for Windows, Mac, Android, iOS, and Linux. If you prefer, you can download Chrome and Firefox browser extensions. Alternatively, custom firmware is available for use with compatible wireless routers.

CyberGhost has more servers than any other VPN we’ve tested. Its network consists of well over 6,500 servers in 89 countries, Brazil included. In fact, there are over 30 servers in Brazil, making it very easy for you to unblock and stream Globoplay from anywhere. This VPN also works with Netflix US and BBC iPlayer, among other popular streaming services. High-speed servers and unlimited bandwidth ensure little to no lag.

With CyberGhost, you can secure up to seven devices simultaneously. Further, you’re well protected thanks to CyberGhost’s strict no-logs policy and use of 256-bit AES encryption. Some of the other security features available include DNS and IPv6 leak protection and an automatic kill switch. This VPN even has what it calls “NoSpy” servers which are independently operated for full anonymity. 24/7 live chat support is also available.

You can access CyberGhost by downloading its apps for Windows, Mac, Android, iOS, Linux, Amazon Fire TV, and Android TV. Browser extensions are offered for Chrome and Firefox. CyberGhost also provides manual setup instructions for use with routers.

30 SERVERS IN BRAZIL:CyberGhost has 6,500 servers in 90 countries and 30 servers in Brazil. Fast speeds for lag-free streaming of Globoplay and Netflix US. Use on up to seven devices simultaneously. Strict no-logs VPN with 24/7 support. 45-day money-back guarantee.

IPVanish has approximately 1,600 servers in 75 locations around the world. While this may be a smaller network than the likes of NordVPN, IPVanish offers multiple servers in Rio de Janeiro and Sao Paolo. Aside from unblocking Globoplay, its US servers also let you watch Netflix US while traveling abroad. With IPVanish, you’ll be able to stream and torrent as much as you want because it provides unlimited bandwidth.

One of the best features of IPVanish is that it allows you to connect an unlimited number of devices per account. As such, you can share it with family, making it a particularly high-value option. With its zero-logs policy, this VPN allows you to browse almost completely anonymously. It uses 256-bit AES encryption and also offers DNS leak protection and a kill switch. 24/7 support is available over live chat, and there are even subscription plans that come bundled with secure cloud storage.

IPVanish apps are available for the following: Windows, Mac, Android, iOS, and Amazon Fire TV. It’s also possible to use IPVanish with Linux and select routers but this requires manual installation.

IPVanish Coupon
SAVE 73% on the two-year plan

PrivateVPN is highly suitable for streaming Globoplay thanks to its combination of servers in Brazil and very fast connections. With this VPN, you’ll have access to servers in 60 countries. This includes servers in the US and UK for unblocking Netflix and BBC iPlayer. Torrenting is also allowed and, with unlimited bandwidth, you shouldn’t run into any problems like lag or data caps. With a PrivateVPN account, you’ll be able to connect up to six devices simultaneously.

This is one of the easier VPNs to use thanks to the clutter-free interface of the apps. You can connect to a server in a single click and have access to live chat support should you need it. Privacy protection comes in the form of 256-bit AES encryption, DNS leak protection, and a kill switch. Furthermore, PrivateVPN has a true no-logs policy and lets you pay in Bitcoin which, when combined with a burner email, allows for anonymous signup.

If you use PrivateVPN, you’ll have access to apps for desktop (Windows and Mac) and mobile (Android and iOS). Manual configuration allows you to use this VPN with Linux as well as compatible wireless routers.

Hotspot Shield has 1,800 servers in total. What’s particularly impressive is that these servers are located in 80 countries. This includes Brazil, making this a strong choice for watching Globoplay while abroad. This VPN is more than fast enough for streaming and torrenting. Indeed, you’re unlikely to encounter performance issues thanks to the unlimited bandwidth. Hotspot Shield also unblocks streaming services including Amazon Prime Video, BBC iPlayer, and Hulu.

With a Hotspot Shield subscription, you’ll have access to 24/7 support. This is available via both live chat and email. A variety of user-friendly apps are available and you can use these to secure up to five devices at once. Connections are secured with 256-bit AES encryption while there’s also DNS leak protection and a kill switch. It’s worth noting that Hotspot Shield doesn’t keep identifying logs of users. As such, all of your personal information stays private.

Can I watch Globoplay abroad with a free VPN?

While you may find a free VPN that works with Globoplay, there are some major downsides to using free VPNs. For starters, many free VPNs don’t offer servers in Brazil which means they aren’t able to unblock Globoplay. Even if a free VPN service does have servers in Brazil, it’s likely to be too slow for streaming. Heavy user load often results in lag and buffering. Free VPNs also struggle to unblock the likes of Netflix and BBC iPlayer.

It may also concern you to know that free VPNs often fail to provide adequate privacy protection. Some lack key security features, be it high-end encryption or a kill switch. However, others make money by spamming you with ads or even logging and selling your browsing data. You’ll also find that free VPNs typically offer far fewer features. There’s unlikely to be live chat support and you won’t be able to connect multiple devices simultaneously.

What can I watch on Globoplay?

Globoplay offers a wide range of content live and on-demand. This is made up of both Brazilian and international TV shows and movies. Here are some of the titles currently available on Globoplay:

We recommend using NordVPN - #1 of 49 VPNs in our tests. It offers outstanding privacy features and is currently available with three months extra free.