LifeLock's upper tiers offer some of the most comprehensive identity theft protection of any service on the market.

If there’s just one identity theft protection company you’ve heard of, it’s probably LifeLock. It was one of the first such services available, founded in 2005 and going public in 2015. Today the service has 3 million subscribers and continues to be the most aggressively advertised identity theft protection company in the world. LifeLock’s history is not without its stumbles, however.

The biggest was in 2010, when the company agreed to pay a $100 million settlement to the FTC, most of which went to consumers through a class action lawsuit after LifeLock was accused of deceptive advertising practices. Lifelock denied any wrongdoing.

If you’re not sure about what LifeLock and similar services do and don’t protect, read our overview. 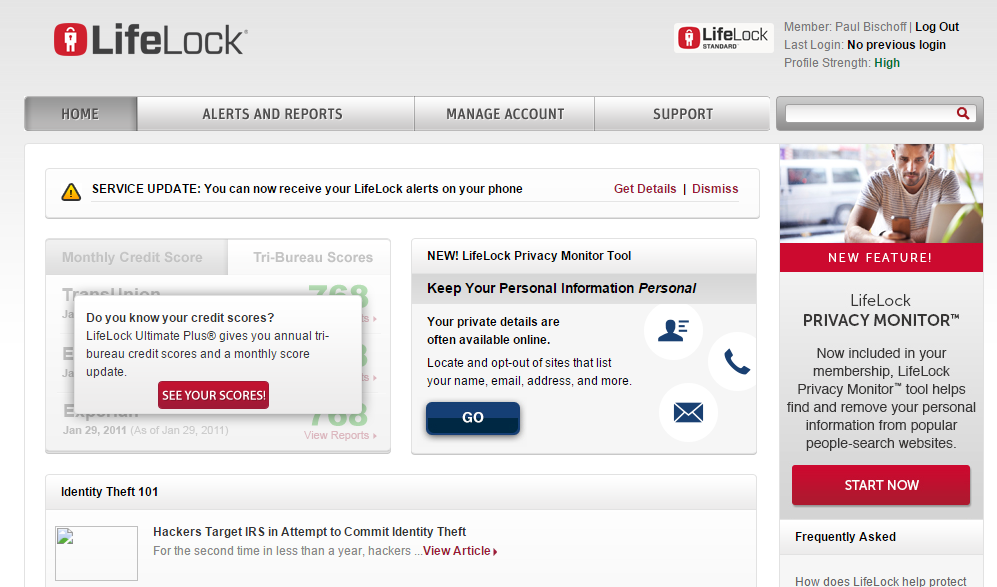 The mid-tier membership, called LifeLock Advantage, doubles the price to $19.99 per month or $219.99 annually. The extra $10 will tack on court records scanning, data breach notifications, an annual online credit report from one bureau, fictitious identity monitoring, and account activity alerts on all your credit, checking, and savings accounts.

Finally, the top tier membership ramps up the price another $10 per month. LifeLock Ultimate Plus does everything the other two tiers do plus a few more extras. Those include investment account activity alerts, bank account takeover alerts, credit inquiry activity, file-sharing network searches, sex offender registry reports, and monthly credit score tracking from all three bureaus.

So which of these is the the most comprehensive package? If LifeLock is to be believed, Ultimate Plus is. But choosing a plan and provider really comes down to what they can do and what you can’t. Most banks and credit card companies today provide many of the same services as LifeLock free of charge. Fraud alerts, for example, can be set up so anytime something fishy pops up on your credit card statement; the company can alert you via email or SMS and even freeze your account if necessary. Lost wallet protection is essentially assuring that you aren’t responsible for any fraudulent charges that slip through the cracks and cancelling lost or stolen cards.

Fewer pre-approved credit card offers is nice, and LifeLock’s privacy monitor tool claims it can reduce public exposure of your personal info online, but those are hardly worth $10 a month. Everything else is just consolidating and enforcing protections you probably already have. Beyond debit and credit cards, LifeLock will also cancel and replace compromised insurance cards, Social Security cards, and driver’s licenses. Finally, the standard membership says LifeLock will scan black market sites where private information is bought and sold to see if your name or info pops up. If it does you’ll receive an alert, but there’s no concrete action you can take from there. Perhaps most importantly, if your identity is compromised, a LifeLock agent will help guide you through the process of restoring it.

LifeLock Advantage offers a broader scope of services that would be more difficult to achieve on your own. Fictitious identity monitoring scans the web for people who may be building fake identities based on your information. I’m not sure why this isn’t in the standard membership, because it seems it ought to be a top priority that I would expect from an identity theft protection agency. This tier also scans court records to help “protect you from being falsely linked to arrests and convictions you know nothing about.” That seems like a long shot and in any case can be done on your own. Data breach notifications are a useful feature so you don’t have to hunt down info every time Target or Bank of America lose a few thousand credit card numbers but, again, there’s not much LifeLock can actually do about it until fraudulent charges start popping up. The online annual credit score is a nice bonus. Credit reports typically cost between $10 and $12 on their own.

The final tier adds on a annual credit report from all three major US bureaus and monthly credit score tracking from a single bureau. If you use any file sharing networks, LifeLock will scan them for your personal information. You also get alerted if a thief takes over your bank account, adds new account holders, and/or if someone inquires about your credit, which is often a first step to applying for a credit card. Again, I’m not sure why this is not included in the standard tier. Ultimate Plus lets you monitor any investment accounts you may have in addition to your normal bank accounts. Finally, you can receive a notification whenever a sex offender moves into your zip code, although that can also be done for free on your own.

If you’re interested in giving LifeLock a shot, a 30-day free trial is on offer. The downside is you must input your credit card number and remember to cancel the account if you decide you don’t want it.

In 2008, credit info company Experian sued LifeLock for sending out fraudulent fraud alerts on behalf of users, thereby keeping their files in a constant state of alert. Irony aside, I haven’t received a single alert in the time that I’ve been testing LifeLock. That means I’m either really good at keeping my info private or LifeLock helped fix the problem.

LifeLock scans for four main behaviors for which to send an alert. The first is newly opened accounts, ranging from payday loans to cable subscriptions to credit cards. Many do not require a credit or background check. The second is activity on your existing accounts. This pretty much works how you would expect it: potentially suspicious charges to credit cards or withdrawals from bank accounts will prompt an alert. Next comes internet monitoring, which scans the web for non-credit types of personal information that might be circulating around cyberspace. This info could have been compromised by malware or a data breach. Finally, LifeLock monitors for suspected abuse of public records, such as court records, addresses, sex offender records, and payday loan records. These can be used to commit crimes in your name and can go years without being otherwise detected.

LifeLock will send you an email alert by default, but you can also set it to send SMS notifications as well.

You can add up to five credit cards and five bank accounts for LifeLock to monitor.

Privacy Monitor is a relatively new feature on LifeLock that aggregates a list of websites where your personal information is listed. LifeLock shows what information about you is listed on each respective site–usually relatives, age, and city of residence–but does not offer an easy way to opt out. You’ll still have to go to the website and fill out a form or go through some other process, as LifeLock won’t opt out of those websites for you. 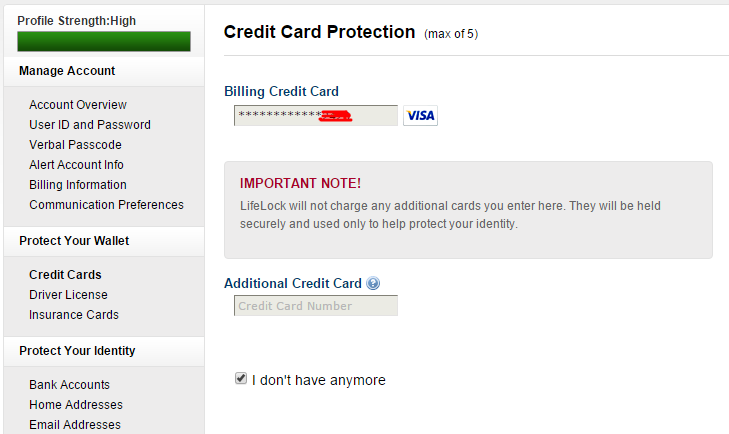 Setting up LifeLock is a fairly painless step-by-step process. Fill in basic account-related information, all your card numbers including insurance and driver’s licenses, and finally your account numbers. Once that’s done, just let Lifelock do the rest.

The account dashboard is split up into four tabs: Home, Alerts and Reports, Manage Account, and Support. The homepage is mostly advertisements to refer friends, upgrade to the next tier, or try out another feature. Alerts and Reports is the meat of the LifeLock service, allowing you to see a chronological list of notifications. If you want to add additional accounts or other information for LifeLock to monitor, that can be done under Manage Account.

LifeLock only has a web version; no mobile app or desktop client. It’s all you really need, though, as you (hopefully) won’t be using LifeLock all that much after the initial setup. LifeLock doesn’t make any concessions for mobile users; its website looks exactly the same on a tiny screen as it does a big one. That can make it a bit hard to read on a smartphone, but it’s not a deal breaker.

The fact that you aren’t a premium subscriber is something LifeLock will constantly remind you of on its website. Links to features you can’t use and advertisements pushing for upgrades are the norm. At least it doesn’t pester you with unnecessary emails.

Phone calls are instant, obviously, so that’s probably your best option. A ticket submission took about a day for LifeLock to respond with a helpful answer. No complaints there.

LifeLock’s upper tiers offer some of the most comprehensive identity theft protection of any service on the market, but we were left wondering why some of those protections weren’t included in the lower-tier memberships. Setup is painless and the interface is easy to use so long as you’re not on a mobile browser. Customer service is helpful and responds reasonably fast.