The main attraction of EasyNews is its web interface, but the confusing data cap scheme discourages customers from using it.

Founded in 1994, EasyNews currently serves over 1 million users around the world, either as an outsourced service offered by ISPs or through a direct subscription. It’s a major Usenet provider that boasts both traditional NNTP servers and an HTTP server with a web app. If you’d like to give EasyNews a shot, you can avail of the 14-day, 10GB free trial, though it doesn’t include the web interface.

Our EasyNews review looks at how this service performs for retention, security, settings, features, support, ease of use and how competitive pricing is compared to the competition.

The „Classic“ plan starts things off at $9.98 (GBP 7.39) per month. That will give you 20GB worth of downloads per month. If you don’t use all of your data, you can store up to 500GB of rollover data. Longtime users will also get an additional 1GB of „loyalty gigs“ per month after each year you subscribe to EasyNews. Optional extras include removing the data cap for $9.95 per month, which means unlimited downloads. And for another $2.21, you can toss in a VPN.

Before we get into the other plans, we first need to dive into what is frankly a confusing download limit scheme. Bear with me, because this gets a bit complicated. If you download all of your data via the HTTP server and web app (which we’ll discuss in more detail further down), you get exactly as much data as what the plans stipulates. However, if you do not use the EasyNews app and instead use a more traditional third-party app and indexer, like SABnzbd and NZB.is, then your data cap doubles. These third party apps, which you must download and set up yourself, use EasyNews‘ NNTP server instead of its HTTP server. If you go this route with the Classic plan, you get 40GB of downloads per month instead of 20GB, and the same goes for all of the other plans; they all double if you don’t use the EasyNews web interface. 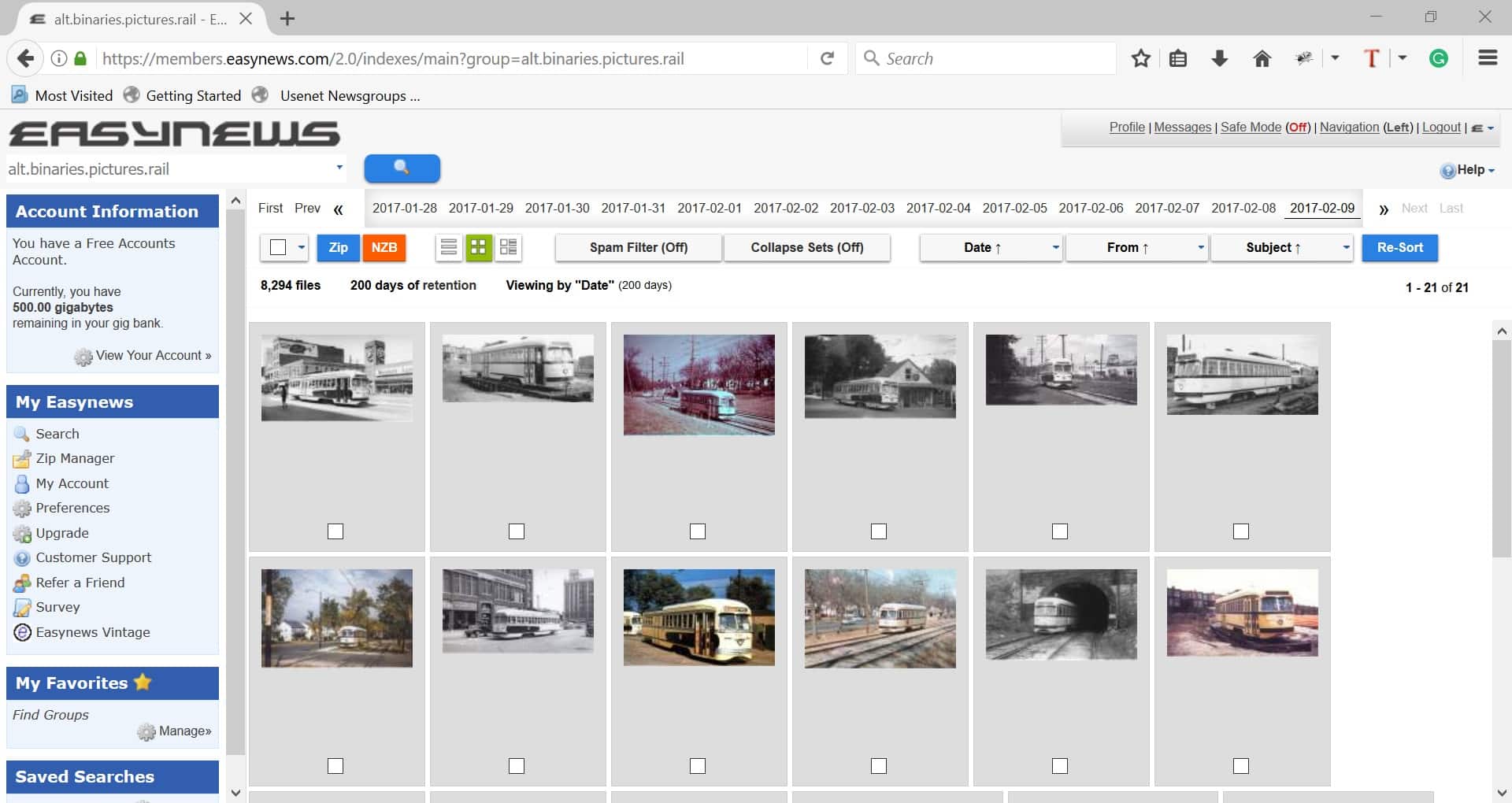 Why does EasyNews discourage people using its own web app? Probably because its more expensive to maintain. But it’s still a strange scheme, one that can be hard to wrap your head around but ultimately isn’t bad for the customer. It’s worth noting that EasyNews makes a distinction between NNTP retention and web retention. Web retention is much shorter–only 365 days in the classic plan–though you can add more for a fee if you wish. If you can’t find a file when searching on the web app, it might well exist on the traditional NNTP servers.

Users can earn a couple extra gigabytes for completing a customer survey. You can also donate your idle PC resources to the World Community Grid to earn an extra 2GB per month. The World Community Grid’s mission is to create the world’s largest public computing grid to tackle projects that benefit humanity. The technology is only available to public and not-for-profit organizations to use in humanitarian research that might otherwise be infeasible due to high infrastructure costs.

EasyNews operates servers in both the US and Europe, with over 100,000 newsgroups available. You can find the domain for the nearest server farm on the company website. Officially US-based, the company is subject to DMCA takedown requests, which means copyright owners can request that content they own be removed from Easynews‘ servers. It’s probably a good idea to buy a backup block account with another provider in case what you’re looking for has gone missing.

Every plan comes with a complementary 256-bit encrypted SSL connection, which works with servers in both regions. The web app uses HTTPS by default, while NNTP users can find a list of ports and the appropriate domains on the website. The optional VPN will make your activity even more private, though every layer of encryption will slow down downloads a bit.

All plans come with the same 2,853 days of retention on the NNTP servers and 60 server connections. Chances are you’ll only need between 10 and 20 connections to max out speed unless you’re on a really fast–100Mbps or more–connection.

Our download speeds weren’t maxed out when using SSL, but they weren’t unbearably slow, either. We found the servers were missing many of the files we tried to download, including movies and TV shows that came out in the last three years. That’s using the NNTP servers, which should retain files for almost eight years. This was rather disappointing, but other users could encounter different results.

One of the listed SSL ports didn’t work during setup, but that was the only technical issue we encountered.

The EasyNews browser app bundles search, downloading, and account management into a single dashboard. Just log in on the EasyNews website after signing up for an account to get started. Users can take advantage of basic and advanced search capabilities to find files, and downloads are handled by your browser like a normal download instead of a Newsreader app. Preview screenshots from videos and photos appear right in the search results.

Unfortunately, if you’re using the Classic or Plus plan, retention is pretty limited. That means a lot of files we searched for were nowhere to be found. Even when searches did turn something up, they weren’t ordered very well with a lot of seemingly less relevant results turning up at the top of the page. On top of that, as mentioned before, using a more traditional third-party Newsreader app and indexer counts for half as much data on your plan, and retention is far longer. We recommend passing on the EasyNews dashboard and opting for a more traditional approach, which is what it seems EasyNews also wants.

EasyNews offers an optional VPN service for $2.99 per month. It doesn’t come with any sort of app or GUI, so you’ll have to set it up manually. OpenVPN, L2TP/IPSec, and PPTP protocols are available, varying somewhat depending on the device OS. We recommend steering away from PPTP because it contains known security vulnerabilities. Most modern operating systems have L2TP/IPSec support built in. OpenVPN is not widely supported, but a slew of open-source clients and apps are available for all the supported platforms.

EasyNews‘ VPN service consists of 80 servers across 17 countries. It allows unlimited bandwidth, unlimited server switches, and up to two simultaneous connections from different devices. It will route all of your device’s internet traffic through the VPN server, not just Usenet traffic. Like the Usenet service itself, the EasyNews VPN abides by a no-log policy.

For SSL users in or near Europe:

For non-SSL users in or near Europe:

For SSL users in or near the US:

For non-SSL users in or near the US:

To me, a ticket submission system does not count as „24/7/365“ support, because that implies a live chat or phone service. Still, that’s the claim EasyNews makes. To its credit however, a ticket we submitted asking to clarify between NNTP and HTTP servers received an email response in less than half an hour, and with a satisfactory straightforward answer to boot.

EasyNews website is fantastic. It has an extremely thorough, searchable knowledge base and FAQ section along with user forums.

During our time with EasyNews, I didn’t receive any unsolicited emails, and the website and web app are ad-free.

EasyNews provides a solid Usenet service with plenty of optional extras and bonuses. The complicated download limit scheme actually benefits users in the end, but discourages customers from using EasyNews‘ own web app. We found a lot of missing files and speeds weren’t as fast as we expect from a Tier 1 provider. EasyNews doesn’t offer live customer support, but replies came very swiftly through the ticket submission system. Prices are competitive but not a bargain compared to rival providers. We recommend giving the free trial a shot before committing to a subscription.