To fully understand VLSM, we need to know the fundamentals. This tutorial explains what a subnet mask, subnetting, and supernetting is and how to implement.
Amakiri Welekwe Technology Advisor | Cybersecurity Evangelist 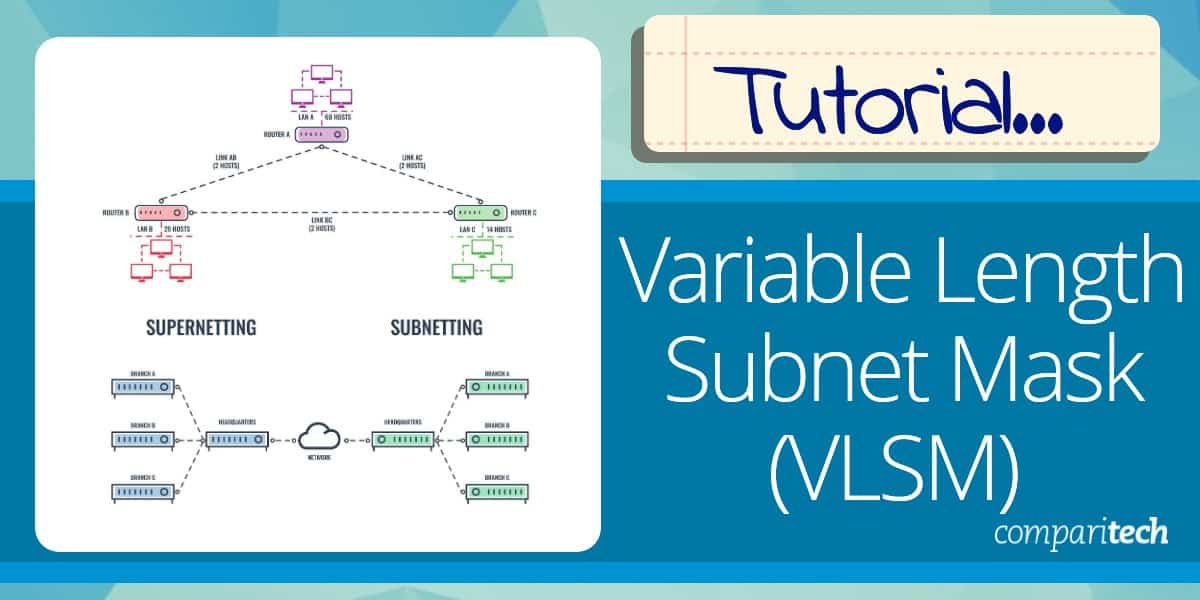 The exponential growth of the Internet in the last 30 years exposed shortcomings in the original IP protocol design. As the internet began to rapidly expand from its initial military network research status into commercial prominence, the demand for IP addresses (particularly in the class B space) skyrocketed.

Experts started to worry about the long-term scaling properties of classes A, B, and C IP address scheme, and began considering ways to modify IP assignment policy and routing protocols to accommodate the growth. This led to the establishment of the Routing and Addressing (ROAD) group by the Internet Engineering Task Force (IETF) in the early 1990s to work out ways of restructuring the IP address space to increase its lifespan. The group according to IETF RFC 4632 identified three major problems:

As a short to mid-term measure, the ROAD group proposed a solution to allow the use of “classless” IP assignment systems to slow the growth of global routing tables and to reduce the rate of consumption of IPv4 address space. This eventually gave birth to what we now know as Classless Inter-Domain Routing (CIDR), and Variable Length Subnet Mask (VLSM), which allows greater flexibility in the creation of sub-networks, overcoming the strict rules of the A, B, and C classes. In this guide, we’re going to help you understand the concept of VLSM, and show you how to implement VLSM Subnetting.

In order to fully grasp the concept of VLSM, we first need to understand the term subnet mask, subnetting, and Supernetting.

Subnet masks are used by a computer to determine if any computer is on the same network or on a different network. An IPv4 subnet mask is a 32-bit sequence of ones (1) followed by a block of zeros (0). The ones designate the network prefix, while the trailing block of zeros designates the host identifier. In shorthand, we use /24, which simply means that a subnet mask has 24 ones, and the rest are zeros.

As the name implies, subnetting is the process of dividing a single large network into multiple small networks known as subnets. The primary purpose of subnetting is to help relieve network congestion and improve efficiency in the utilization of the relatively small network address space available especially in IPv4.

Supernetting is the direct opposite of subnetting, in which multiple networks are combined into a single large network known as supernets. Supernetting provides route updates in the most efficient way possible by advertising many routes in one advertisement instead of individually.

The main objective of supernetting is to simplify or summarize network routing decisions to minimize processing overhead when matching routes, and storage space of route information on routing tables. A routing table is a summary of all known networks. Routers share routing tables to find the new path and locate the best path for the destination. Without Supernetting, the router will share all routes from routing tables as they are. With Supernetting, it will summarize them before sharing, which significantly reduces the size of routing updates.

VLSM is a subnet design strategy that allows all subnet masks to have variable sizes. In VLSM subnetting, network administrators can divide an IP address space into subnets of different sizes, and allocate it according to the individual need on a network. This type of subnetting makes more efficient use of a given IP address range. VLSM is the defacto standard for how every network is designed today. Table 2.0 below is a summary of the differences between FLSM and VLSM Subnetting. VLSM is supported by the following protocols: Open Shortest Path First (OSPF), Enhanced Interior Gateway Router Protocol (EIGRP), Border Gateway Protocol (BGP), Routing Information Protocol (RIP) version 2 and 3, and Intermediate System-to-Intermediate System (IS-IS). You need to configure your router for VLSM with one of those protocols.

Now imagine this scenario: John has just been hired as a network administrator for a new company with six departments. He’s expected to create six separate subnets, one for each department.  He was given a class A 10.0.0.0 private network address for this purpose; and so from all indications, he obviously has a lot of IP address space and can’t even come close to imagining that he’d ever run out of IP addresses. For this reason, John has been wondering why he should bother with the VLSM design process. Should he use a VLSM or an FLSM network design?  Well, the answer is simple. By creating contiguous blocks of valid addresses to specific areas of the network, he can then easily summarize the network and keep route updates with a routing protocol to a minimum. Why would anyone want to advertise several networks between buildings when you can just send one summary route between buildings and achieve the same result?

We will begin this section by attempting to solve a practical VLSM problem.  Now, imagine you were recently hired as a Network Engineer for Braxton Investment Limited. Using the VLSM technique, design an IP plan for the company with an IP range of 192.168.4.0/24.  The company’s network consists of three local area networks: LAN A, LAN B, and LAN C as shown in Figure 2.0 below. These three LANs are connected with three serial links: Link AB, Link BC, and Link AC.

One of the easiest ways to solve VLSM problems is by using a subnetting chart like the one shown in Table 3.0 below. We will use this chart to tackle the above problem

As you can see from the diagram, we have six networks LAN A, LAN B, LAN C, and link A, link B and a link C.  Links A, B, and C are also three separate networks and each requires two host identifiers.  Thus our task is to design an IP plan for each of the six networks according to their stipulated sizes using VLSM subnetting method. We need five steps to solve the problem:

Step 1: Arrange the networks from the largest to the smallest as shown in Table 4.0 below:


Table 4.0 LAN arranged according to the number of hosts

Step 2: Implement VLSM subnetting for the largest network (LAN A)

The largest network LAN A requires 60 hosts. From the Host section (row) of our subnetting chart below, the closest to the required 60 hosts is 64, which corresponds to 4 subnets and a new CIDR value of /26 (the column is in bold). From this relevant information, we will build a new table containing Network ID, Subnet Mask in CIDR notation, Usable, and Name of Local Area Network affected. Keep in mind the first host identifier is reserved for the network ID and the last host ID is reserved for the broadcast ID, so the total number of usable host IDs for each subnet in this particular case is 62 (64-2).

Now let’s list a network ID for each subnet. Keep in mind that only the fourth octet changes; the first three octets remain the same:

Here is the pattern:  The first network ID is always the original one. The next network ID is obtained by adding 64 to the previous one.  We can assign any of these for subnets to LAN A since they are all equal in size, but for the sake of simplicity, we assign the first subnet (192.168.4.0) to LAN A. The other three available subnets can be marked as unassigned and reserved for future use. We have completed the task of designing the IP plan for the largest LAN – LAN B.

Step 3: Implement VLSM subnetting for the second-largest network (LAN B)

The second-largest network, LAN B, requires 29 hosts. The minimum number of hosts which can satisfy LAN B with the 29 hosts on our subnetting chart is 32. This corresponds to eight subnets and a new CIDR value of /27 (the column is in bold).

This step repeats the process above. The minimum number of hosts which can satisfy LAN C with the 14 hosts on our subnetting chart is 16. This corresponds to 16 subnets and a new CIDR value of /28 (the column is in bold).

Step 5: Implement VLSM subnetting for Link A, B, and C

The last step is to assign three smaller subnets for serial links A, B, and C.  Each link requires two host IDs.  Therefore, the minimum number of hosts which can each link with two hosts on our subnetting chart is four. This corresponds to 64 subnets and a new CIDR value of /30 in our subnetting chart (the column is in bold).

Now select the unassigned subnet in Table 7.0 above and subdivide into four smaller subnets to accommodate the subnets for the three serial links. This gives us four unique IPs as shown in Table 8.0 below.

Again here’s the pattern: The first network ID is always the original one. The next network ID is obtained by adding four to the previous one. We can then assign the first three IPs to Link A, B, and C respectively, and mark the last one (192.168.4.124) as unassigned and reserved for future use. We have completed designing the IP plan for Link A, B, and C, and indeed the entire network. The table below is the complete IP plan for Braxton Investment Limited.

VLSM is a crucial technique in modern network design. If you want to design and implement scalable and efficient networks, you should definitely master the art of VLSM subnetting. One of the key objectives of VLSM subnetting in IPv4 is to improve efficiency in the utilization of the space available. This has managed to keep it going in the last 30 years. But on the 25th of November 2019, RIPE Network Coordination Centre announced that it made the final /22 IPv4 address allocation, and has officially run out of IPv4 addresses. A longer-term solution to the eventual exhaustion of the 32-bit IPv4 network address space is the 64-bit IPv6 protocol.

How do you calculate VSLM?

The simplest way to calculate VLSM is by using a subnetting chart like the one shown in Table 3.0 above, and then following the steps below:

What does it mean when it says "IP not in subnet range"?

How would the use of VLSM impact your choice of routing protocols?