AVG’s free antivirus has, in my opinion, often appeared to be nothing more than a vehicle for persuading users to upgrade to one of the company’s paid security products.
While that’s an understandable business move, the constant nagging to upgrade has been annoying as hell in previous versions of AVG Free, so has the company changed tack in 2015 I wonder?

Note: Since publishing, AVG’s parent company, Avast, has come under significant criticism for collecting and selling user data. While the AVG tool has not been implicated, we will update this review shortly with more clarity regarding the safety and security associated with AVG antivirus.

AVG lists the following as the minimum system requirements for running the program:

I would assume that 32-bit would definitely be supported and, in my testing, can confirm no issues running on a Windows 7 Home 64-bit installation, but it would be nice to see some official word on that score.

As a free program AVG Free will present you with a hoop to jump through as soon as you go to download it – you’ll need to bounce over to CNET to get it.

No big deal, but it does provide a glimpse into what is to come – a download page containing more than a few adverts. 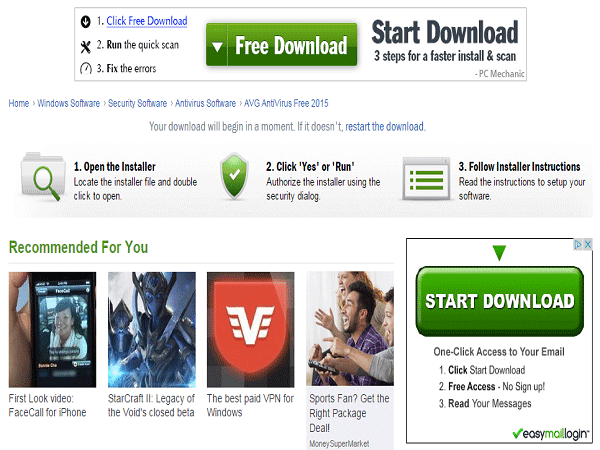 After carefully navigating various enticing buttons which download anything but what you want, a small button leads to the download of a small executable file.

Open this up and you’ll be into an installer that quickly asks you to select your language and accept the company’s terms and conditions.

The program will then try and guide you into ignoring your choice of free antivirus by defaulting to another option – the download of the company’s alternative (paid for) internet security program.

It pays to pay attention with AVG!

Following this, a 69 MB installation is commenced, taking around 3 minutes to download and install on my humble i3 NUC.

Upon completion of the installation of AVG Free, a web page was opened, offering me the opportunity to grab the vendor’s free AVG Antivirus for Android. I said no thanks as I don’t own any such devices.

When the interface first appears there are several things that will catch your eye but the aesthetics of it may not be the first thing that springs to mind.

The first thing you’ll likely spot is a massive prompt to install the ASK toolbar. 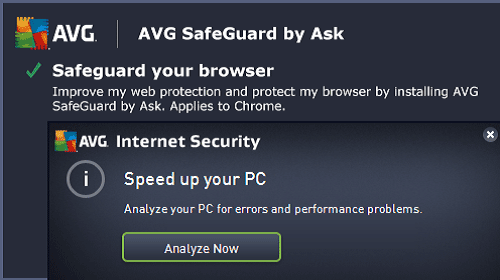 You may like that sort of “web protection” but I don’t and nor does anyone I know.

Do yourself a favour and uncheck the box and decline the offer.

Secondly, you’ll probably notice that about a quarter of the interface is taken up by a banner telling you you’re free trial is finite and offering you an opportunity to buy the full program.

That this caught my eye before any information about the safety of my system was disconcerting. 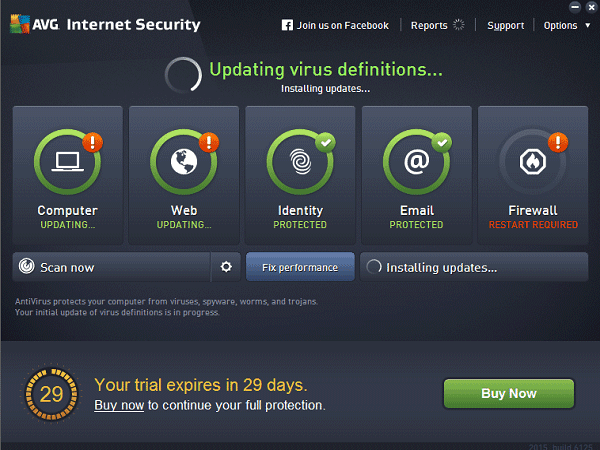 Beyond that, the interface is quite appealing, utilising a black, grey and green colour scheme that ustilises red to great effect when alerting you to any issues.

The key areas you’ll want to look at with the program are laid out on the main screen which is always useful but not always designed in by some security vendors.

At first glance AVG Antivirus Free 2015 appears to be packed full of interesting features but a quick bit of prodding around may undo your first impressions.

Even though a firewall is proudly heralded from the main screen, there isn’t actually one there – it’s an optional extra.

And that’s not good business in my opinion.

Sure, I get that you shouldn’t expect those components in an antivirus program, and I get that AVG is looking to make money – its a business after all – but the way it goes about it is misleading in my opinion.

Grumbles aside, the program does of course include an antivirus scanner as well as the ability to scan web and social media links and protection against malicious emails. 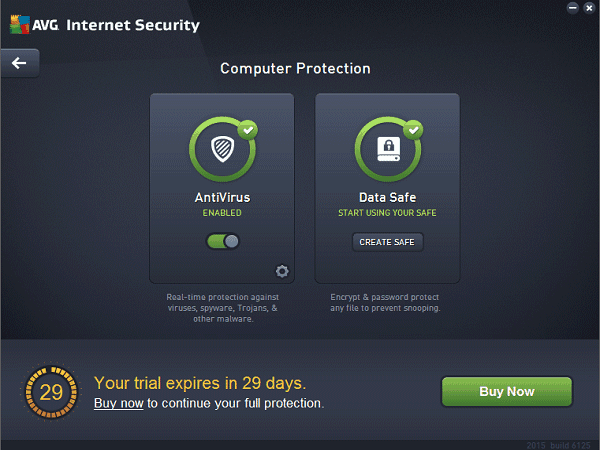 The only other tools of note are a scanner for downloads, identity protection which is a function that scans installed software for suspicious behavior, and the ability to schedule scans and update checks.

Does such a dearth of extra tools mean you should quit reading this review and pay out for an antivirus program instead?

Not necessarily – paid programs offer more features for a price but if you have to ask whether you will actually use them then you’re probably wasting your money in the first place.

Instead, I would say a free antivirus program could be totally adequate for some people.

As long as it provides adequate protection…

Not all antivirus programs are created equally.

Some are free, some not so.

But whether you pay for your security software or not you should be able to rely on at least an adequate level of protection.

Unfortunately, AVG Antivirus Free 2015 is a bit of a letdown in this area.

According to independent testing lab AV-Test, the program only scored 100% in two of its four tests, picking up 96% and 98% for protection against real-world 0-day malware attacks and detection of common malware discovered in the last 4 weeks respectively.

In terms of protection, performance and usability, AV-Test rated AVG as one of the lower performers with a score of 14.5 out of 18.

In my own quick test – I simply ran a full scan after installing the program – the 7 minute process (that’s quick!) culminated in AVG telling me a threat had been removed.

Given the fact that it was running on a freshly installed and updated installation of Windows 7 that was quite a surprise.

So what did it find? Interestingly, the neutralised file was the driver for my Dell monitor.

Having given the software a bit of a bash it’s nice to end the review on a far more positive note.

When running a scan, memory usage is very low indeed. Likewise, the CPU is barely taxed at any point during the process with each core being used less than 40% of the time.

Scans are quick and multitasking while running them is no problem at all – no slowdown was spotted whatsoever.

AVG definitely impresses in this regard though with the caveat that its detection abilities are not actually the best by any stretch.

AVG Antivirus Free 2015 is a bit of a mixed bag really.

It’s main selling point is the fact that it is free and you cannot complain too much about the value you get from a product that doesn’t cost anything.

Installing this antivirus program on your machine is definitely a step in the right direction versus not using any security software protection at all, but it’s not the best at detecting or neutralising malware, even when compared with other free programs.

Add the attempted upsell that’s noticeable at all times and the lack of additional tools and you are left with something I believe to be a little uninspiring.

Not a complete waste of space but, as my old school teacher often used to say, could do better.