Another antivirus with a strong reputation gained over many years, Kaspersky Anti-virus promises much. But does it deliver?

Keep reading for everything you need to know.

Like other AV software, Kaspersky has a variety of plans to choose from, with the higher tiers of the likes of Kaspersky Total Security costing significantly more. For this review, though, we’re focusing on Kaspersky Antivirus Plus, which retails for $39.99 per device per year. 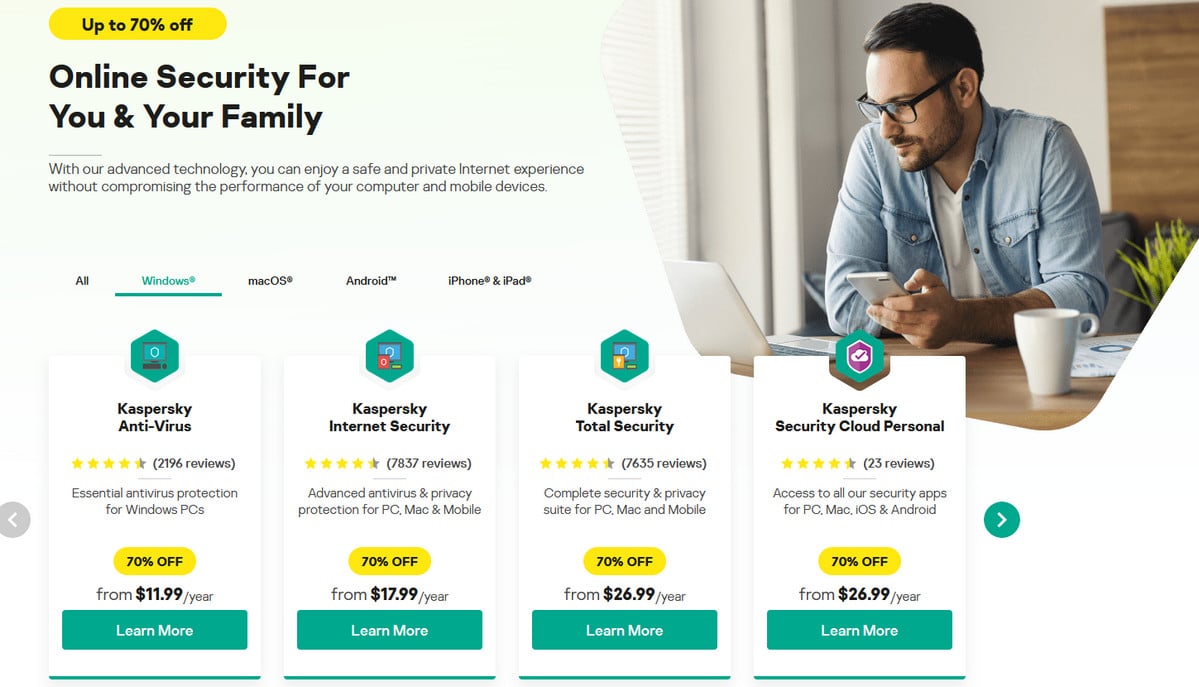 Much like its competitors, Kaspersky regularly runs promotions on its security packages, and at the time of writing, all plans have 70% off. That brings the price of Kaspersky Antivirus Plus to a reasonable $11.99 for the first year.

Being an antivirus program the main feature you would expect to find is of course a scanning engine and Kaspersky offer several options in that regard:

There is also a Task Manager tab that summarises previously run scans or shows the progress of any scan currently in progress.

Again, tucked at the bottom of the page is another link, this time to the program’s settings and scheduling functions.

While not exactly invisible it could be missed, at least by first time users, which would be more of a shame than a problem.

Beyond providing the opportunity to schedule up future scans, the settings function provides otherwise obscure access to some interesting features such as the ability to choose whether or not the program runs when Windows starts up, or scans email messages.

While the defaults favor security over convenience, it is a shame that the settings page is not given more gravitas within the interface. 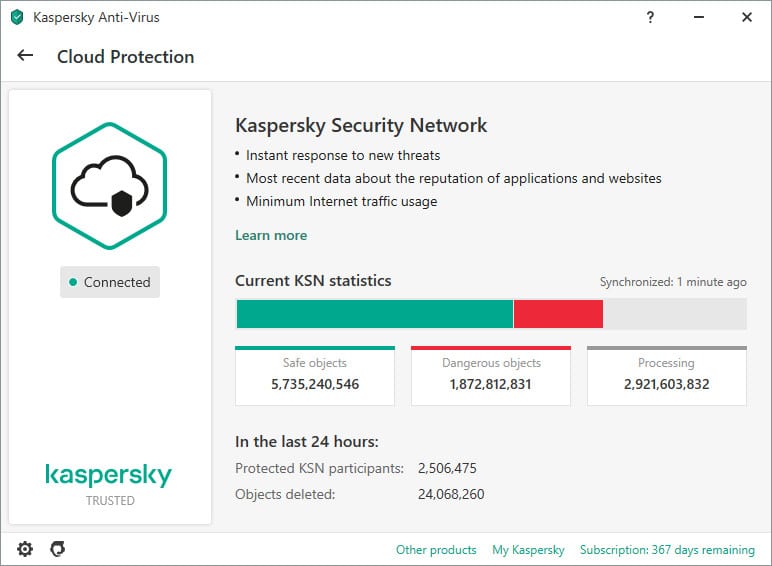 As previously mentioned, Kaspersky Anti-virus packs a few additional tools that can be accessed from clicking a link in the bottom right corner of the interface. They are:

There is also a link to Microsoft’s own Windows Troubleshooting wizard as well as a separate link to an included Virtual Keyboard which can be used to thwart keylogging software.

All in all, this is quite an impressive list of extra features for what is marketed as a standalone antivirus program.

While not quite as extensive as the extras offered by Bitdefender’s equivalent product, the list still boasts significantly more features than that offered by other security vendors.

To ensure that Kaspersky was up to tackling malware threats, I put it up against a range of inert viruses obtained from the EICAR. The four files consisted of an executable, a .txt file, and two zipped executables. 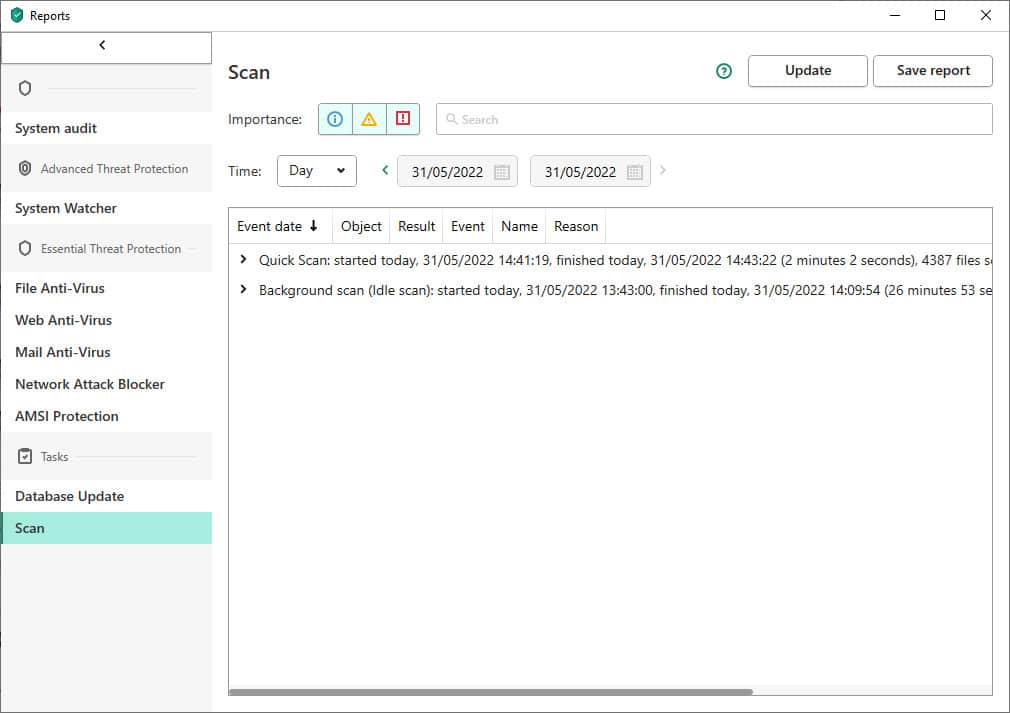 I also obtained three real virus samples consisting of trojans and adware. I ran a real-time scan (background scanning), an on-demand quick scan, and a full system scan to see how Kaspersky dealt with the viruses.

As you can see from the above results, Kaspersky detected and blocked all virus samples during real-time scanning. It also located the files and deleted them during a full scan. Unfortunately, it didn’t catch any of the files during a quick scan.

When you sign up and install Kaspersky Antivirus, Kaspersky Password Manager is installed as a seperate application (although I had to find this out for myself in my installed apps). Using the software lets you create a master password which unlocks access to your password vault. 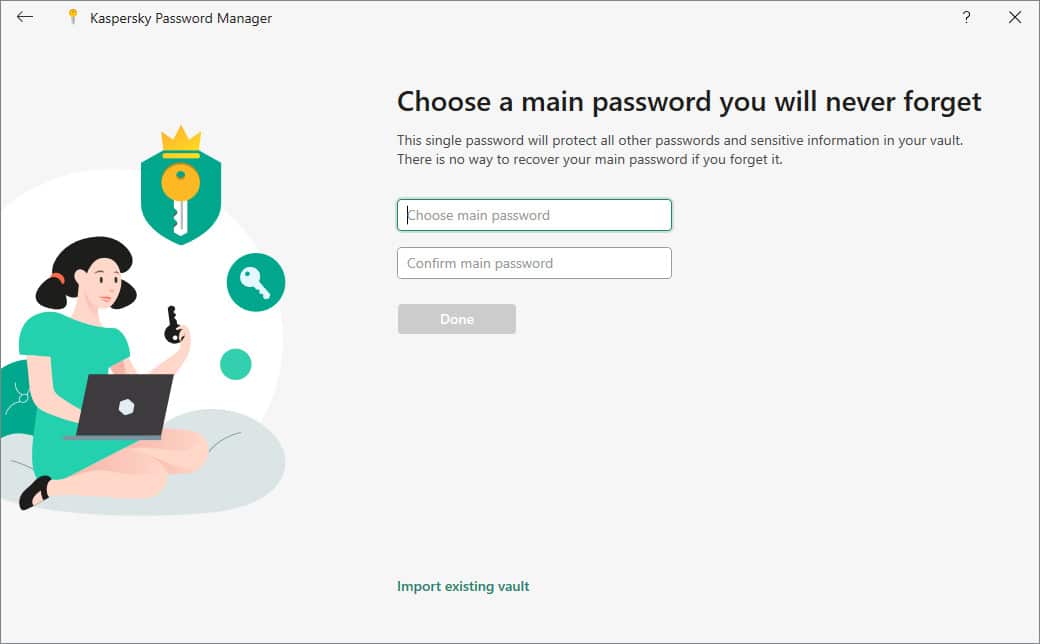 You can generate secure passwords which will be stored in your vault, so you’ll never have to remember a password again (except the master password).

Also bundled with Kaspersky Antivirus is Kaspersky VPN (again, I only noticed this when I was scrolling my installed apps). The free version of the VPN includes a 200 MB daily bandwidth cap and access to a decent list of server locations. Should you need more bandwidth, you can upgrade to the premium version.

The Virtual Private Network (VPN) will hide your online activities from the likes of your ISP, protect your connection from hackers on insecure wifi networks, and it’ll let you stream your favorite content from anywhere worldwide. 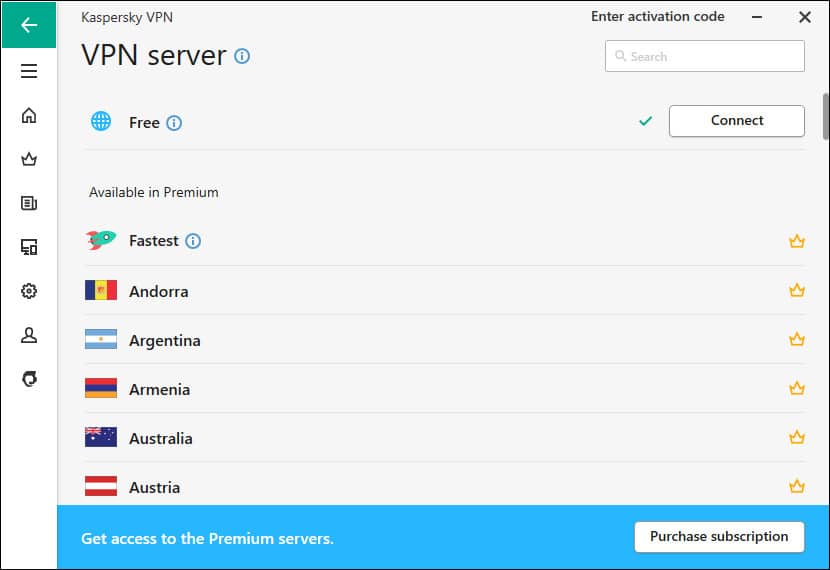 Some antivirus providers have this annoying habit of bringing your system to a halt during scans. To ensure this didn’t happen with my own PC, I recorded the impact on performance while scans ran in the background, during quick and full scans.

Check out the results below.

I didn’t notice any slowdown during scans, and as you can see from the table above, the impact was fairly insignificant. However, you can see how Kaspersky performs against other providers in the table below for some context.

When you purchase a Kaspersky subscription you’ll get an option to select the software version for your home region. By default, the option is set to the global software version. 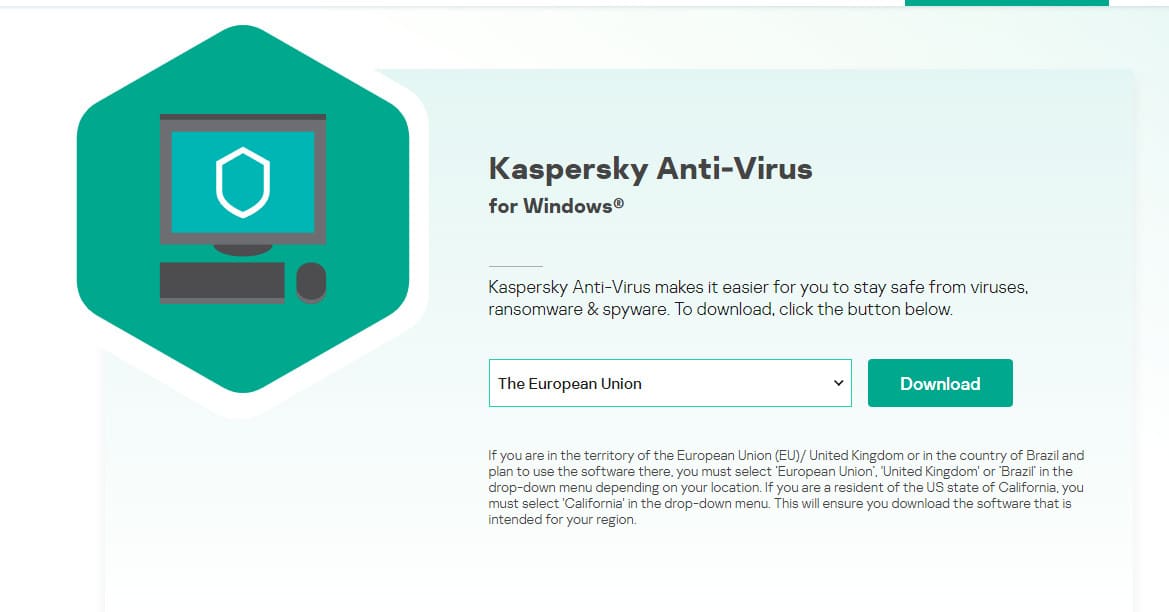 Kaspersky lists the following as the minimum system requirements for running the program:

In my testing Kaspersky used very small amounts of RAM so running close to the wind on that specification may not cause you too many issues.

In terms of overall system impact the program was not so kind on an i3 processor running at 1.8 Ghz so I would urge caution if you are thinking of running this program on an older machine.

Installation of Kaspersky Anti-virus is both simple and quick.

Unlike some other antivirus programs, the Russian firm’s software can be on your system and ready to go within as little as 3 minutes of clicking on the download link.

Why is installation so quick? 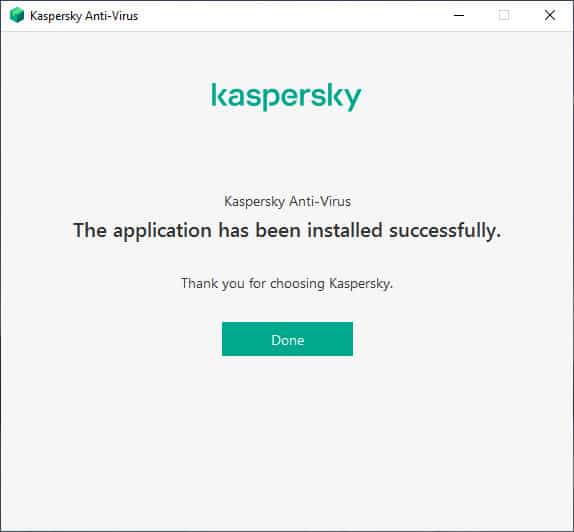 Quite simply, it’s because Kaspersky choose not to run a quick scan or download any updates as part of the setup process.

Whether that’s a good thing or not is a matter of opinion – mine wavers towards a more timely installation process that ends with an antivirus solution that’s good to go and which has already checked the key areas of a system for malware.

The other approach, the one Kaspersky has taken, could leave you vulnerable if you choose not to update the database of virus definitions or run a scan soon after installation.

Kaspersky’s decision not to implement an update and scan into the installation process appears even more strange when you consider just how quickly it can perform both – your times may vary, depending on number of updates to be downloaded and files to be scanned, but mine took 90 and then 50 seconds respectively.

Quite why that couldn’t be built into the install and setup routine I do not know.

The interface chosen by the Russian security firm isn’t bad – the grey, white and aqua colour scheme works well enough and the interface makes it clear whether your computer is fully protected via a message at the top of the screen.

On the main page Kaspersky Lab proudly displays four large buttons. One of those is for the scanning function which is fair enough as that is the main feature of this type of software. 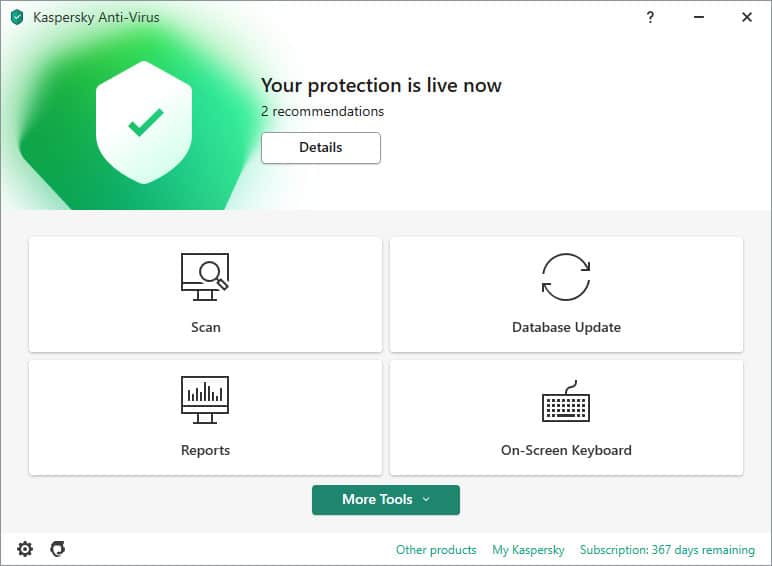 Other obvious links allow you to update the program, engage a virtual keyboard and read reports.

While the latter may be interesting, I can’t imagine many people spending too much time on them.

Features such as vulnerability scanning can be found listed under the scan tile. In previous versions, it was difficult to finnd such features as they were revealed by clicking a small text link. 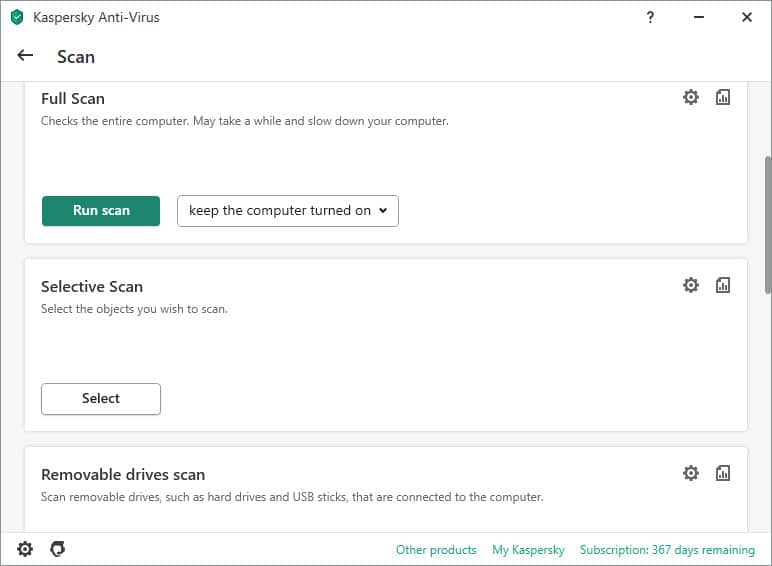 Having support available when you need it is a must, even more so with AV software. Kaspersky offers a great range of support options for home users, including 24/7 live chat, email support, in-depth FAQs user guides, and a community forum. 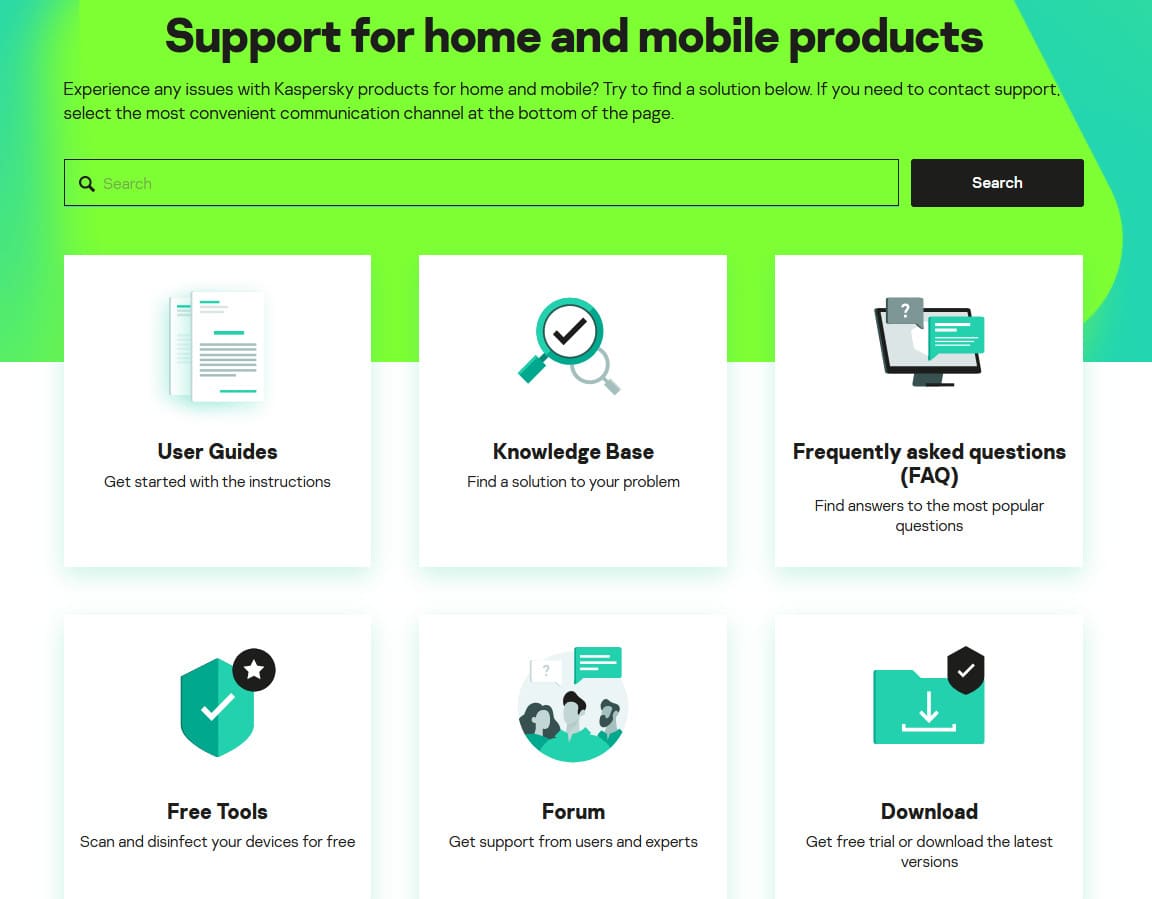 As impressive as the additional tools bundled by Kaspersky are, it is antivirus performance that will be the most important consideration for most people.

In that respect, the program performs admirably enough, scoring 100% in the four tests run by independent lab AV-Test.

In terms of protection, performance and usability, the program scored top marks, a feat only matched by Bitdefender. 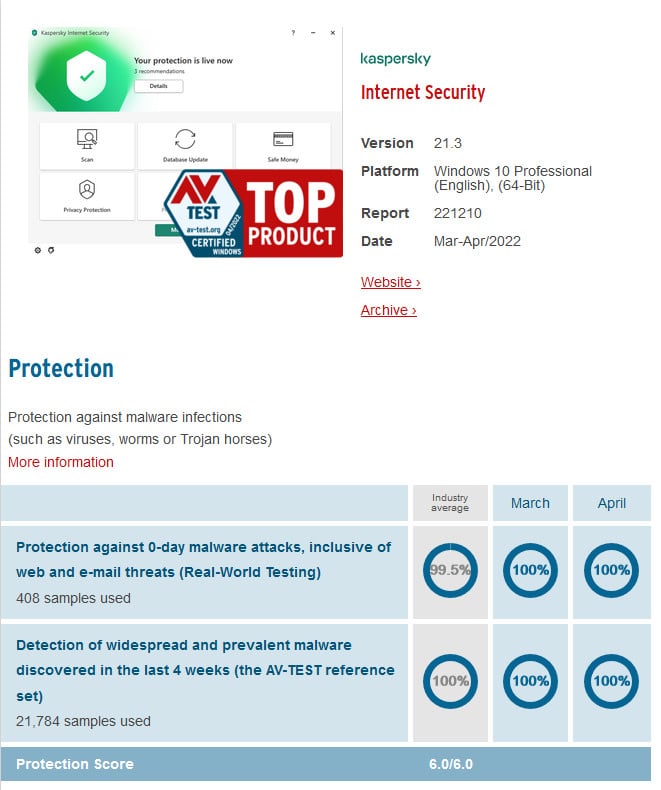 At AV-Comparatives, another independent testing lab, the assessment matched that of a great product rather than the best.

Kaspersky Anti-virus is featured in the February 2022 real-world protection report which saw it achieve a 99.4 percent protection score out of 362 live samples. 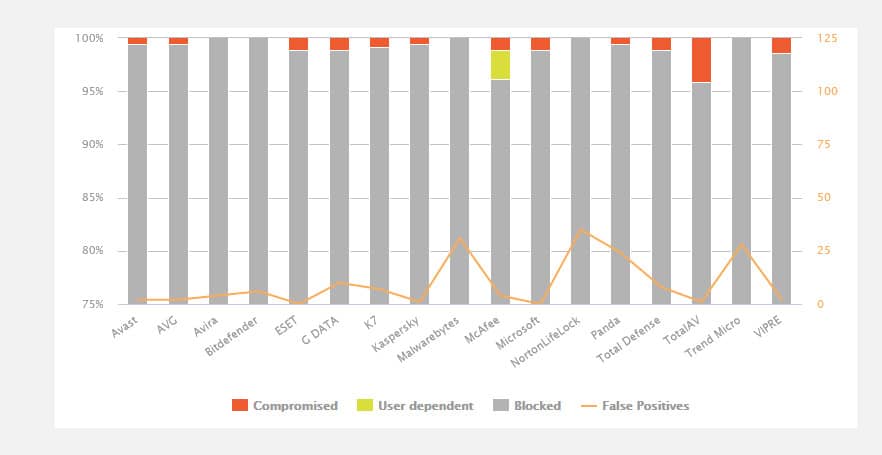 All in, a very impressive rating that arguably leaves Kaspersky in second place behind Bitdefender.

Kaspersky Anti-virus is a very good program, rated highly by independent labs, and packed with extra features that many of you may find genuinely useful.

Though it is not quite as highly rated as Bitdefender Antivirus Plus is a point to note but the margin between them is a fine one, especially given the fact that Kaspersky’s offering does tend to be less expensive.

Which of the two is the better match for you may well be a personal choice – functionally they are pretty much the same though some may find Bitdefender easier to use.

Whether that warrants the higher cost is up to you to decide.

Before I go, there is one last thing to mention – although not really a part of the review per se, I think it is important to mention some recent bad press received by Kaspersky Lab regarding false positives – files identified as being malicious in nature when they are actually benign.

Much has been said about Eugevne Kaspersky and the alleged business practices of the company he founded with his ex-wife.

At the time of writing nothing has been proven and I personally would say stories about Kaspersky trying to sabotage competitors is complete bunkem.

So, my advice: don’t be put off by media reports that quote anonymous sources, and don’t fret about Kaspersky being based in Russia – neither are relevant in my opinion.