Facebook allows users to choose who manages their accounts when they die, but two-thirds of users have never done so, according to a recent study.
Paul Bischoff TECH WRITER, PRIVACY ADVOCATE AND VPN EXPERT

When a Facebook user passes away, their assigned legacy contacts can write a pinned post that sits at the top of the deceased’s profile, respond to friend requests, manage tribute posts, remove tags in other people’s posts, change the profile photo, and request that the account be deleted. This is distinct from leaving someone a username and password because legacy contacts cannot log in to the account, read the deceased person’s messages, remove friends, or make new friend requests.

If no one is assigned as a legacy contact, the account can be still be memorialized but no one will be able to care for it. Verified immediate family members can request deletion, but this takes time. If no one reports a user to Facebook as deceased, then the account can remain active indefinitely.

Of Facebook’s more than 2 billion users worldwide, 1.4 billion are expected to die before 2100, and the dead will surpass the living on Facebook by 2070, according to an Oxford University study. And that doesn’t even take into account new people who join Facebook for the first time. With them included Facebook could have 4.9 billion deceased members by 2100.

Facebook accounts of the deceased can be a target for hackers and scammers, as one UK woman found out the hard way. Sarah Smith’s (not real name) mother passed away after a battle with cancer in early 2018. While at a wedding later that year, Sarah started receiving messages from her family, saying they were being contacted by her mother on Facebook. 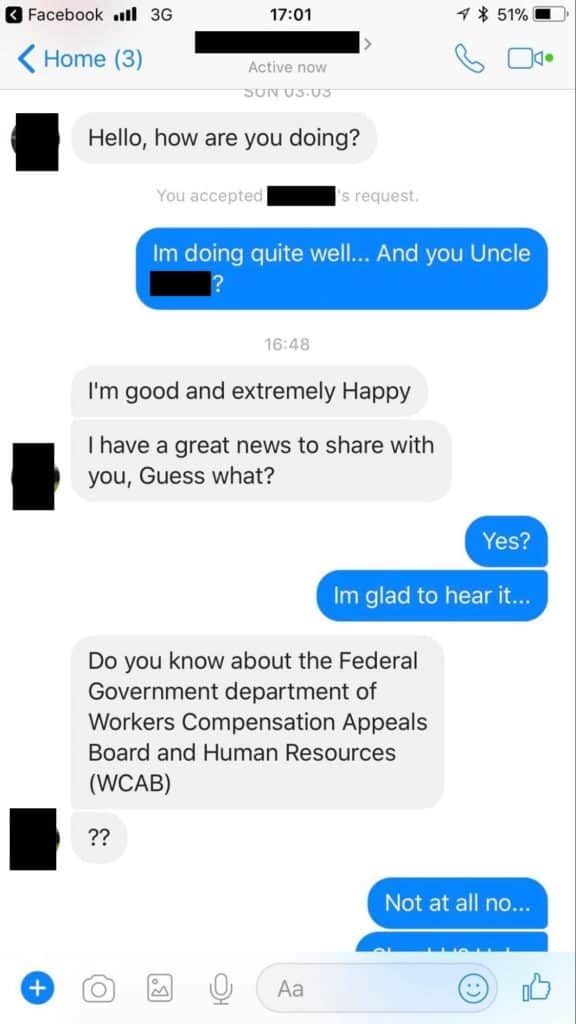 Cloned accounts are fake copies of legitimate Facebook accounts used for impersonation. Scammers often target disused accounts, such as those of the deceased, for hacking and cloning because the original owner is not present to stop or report them.

The person who cloned Sarah’s mother’s account had been sending scam messages from the cloned account to friends and family on Facebook. The scammer claimed, among other things, that Facebook friends could receive money through a federal worker’s compensation program. The messages caused distress and confusion among those who knew Sarah’s mother to be deceased, while others could have fallen for the scam assuming it was coming from a trusted contact. 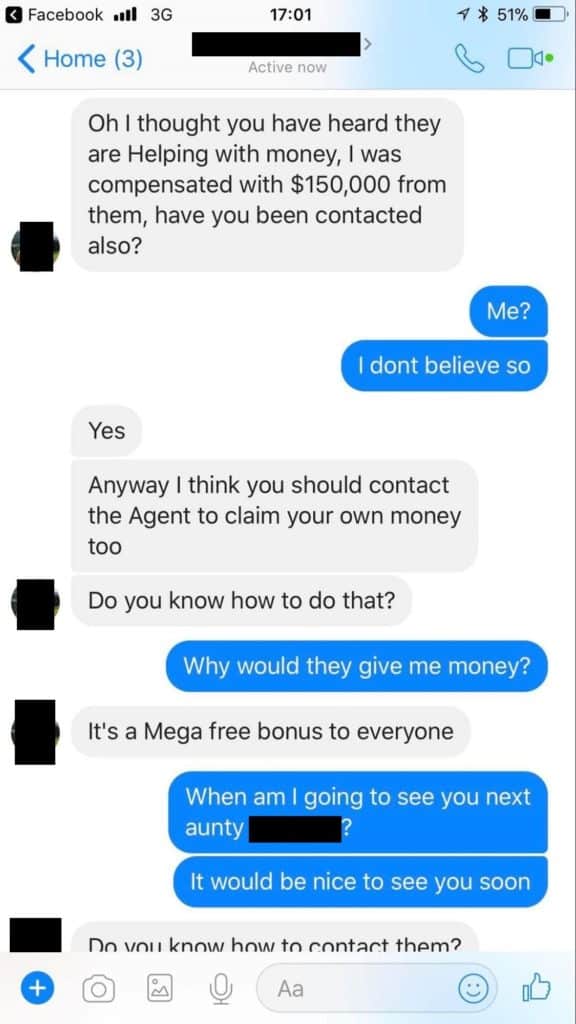 Eventually, Sarah was able to have the account memorialized and the scam messages stopped. But because Sarah’s mother had not set a legacy contact, the process was not instant and the cloned account was allowed to carry on with the scam messages for some time.

Facebook support was not helpful. The company simply redirected her to support pages on how to report hacked accounts and how to memorialize accounts, but nothing on how to deal with a clone of a memorialized account. In fact, Facebook has a fake account reporting mechanism, but this was never communicated to Sarah and would not guarantee that the account be taken down. 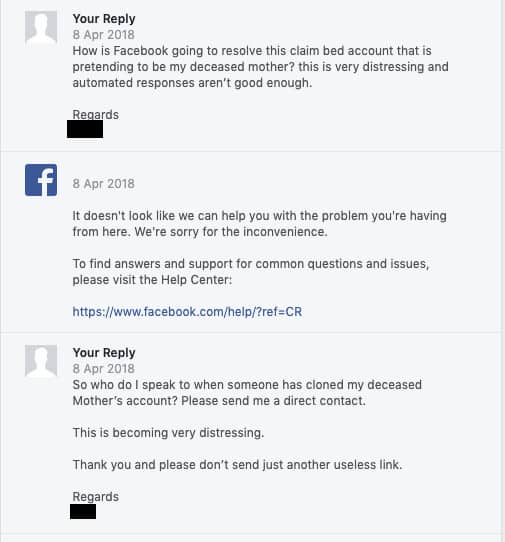 Fast forward one year, to early 2019, when friends alert Sarah that, again, they’ve been receiving friend requests and messages from her mother. Another—or possibly the same—cloned account.

This time, the scammer impersonating Sarah’s mother sent out messages and links claiming the recipients could get money from a “United States Democracy Fund.” Even though the account was fresh and had no mutual friends, many people simply accepted the friend request and messages based on the name and profile picture alone. Comparitech could not confirm whether anyone fell for the scam. 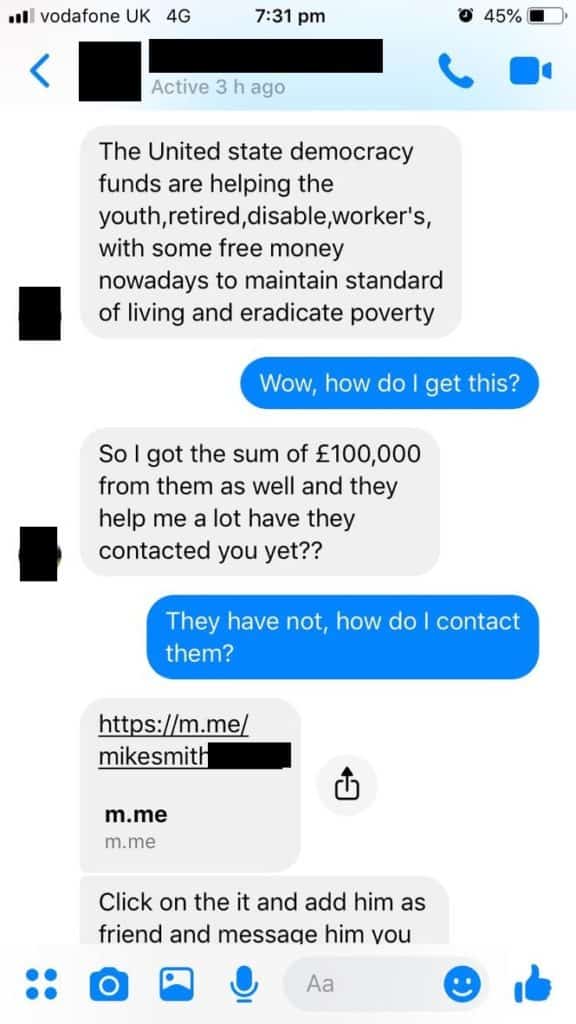 You can request your account be deleted in the event of your death in Facebook’s settings. However, think carefully about the potential consequences.

Deletion might well be the most private option, but consider that simply vanishing from the site might distress your friends. Also, if your profile is removed, then it makes it easier for hackers and scammers to impersonate you without competition from the original account. Memorialized accounts have their uses, such as informing friends and family about memorial services.

The screenshot below shows why it might be a good idea to maintain a posthumous presence on Facebook. It’s from a conversation between a cloned account and the deceased person’s relative. The existence of two identical accounts tips off the relative that this might be a scam. 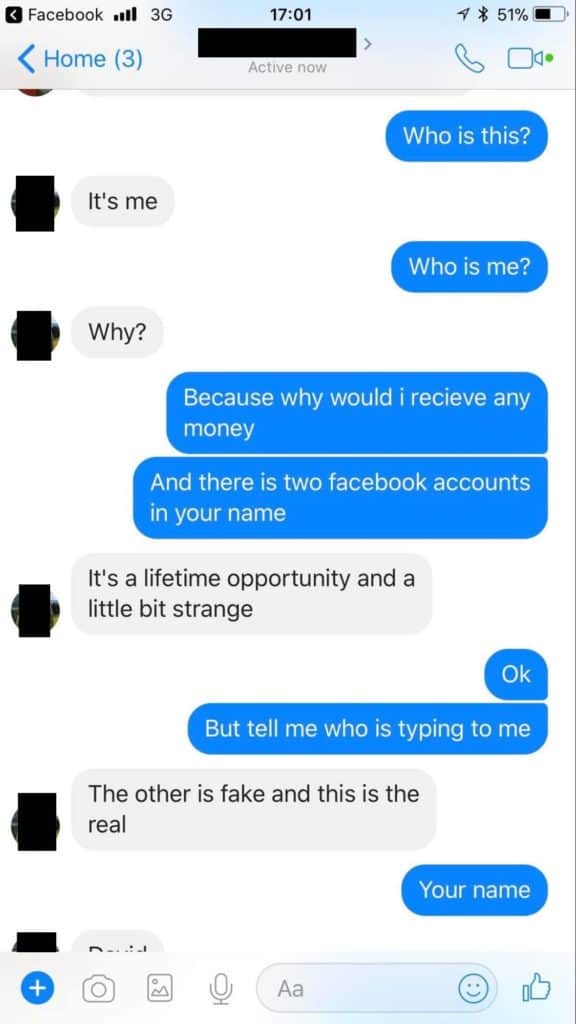 One could argue that memorialized accounts deter scammers in this way, but the memorialized status could be what attracted the scammer in the first place.

Remember that an account can be deleted by its legacy contact, so you can always assign a legacy contact and tell them to memorialize it first, post an obituary and info about memorial services, allow time for friends to leave condolences, and delete the account afterward.

Whatever you choose, choose something, because Facebook’s default option is the worst. By default, your account will not be deleted when you pass away. Let’s say, you don’t have a legacy contact set up and your friends report you as deceased. Once Facebook verifies your passing, your account will be memorialized, but no one will be able to care for it. Immediate family members can request deletion, but it’s a hassle. If that’s going to be the end result, anyway, then save your family and friends the trouble and choose account deletion. This will still require others to report you to Facebook as deceased, but it’s a much simpler and faster process.

2/3 of people don’t have legacy contacts on Facebook: survey breakdown

Let’s break down the numbers by age, gender, and country:

We asked respondents what they would want to happen to their Facebook accounts if they were to pass away; 27% chose memorialization, and 34% said they would like their accounts to be deleted.

The oldest respondents, ages 55+, were the most likely (44%) to choose deletion.

Finally, we asked respondents how they would feel if they were to see a deceased family member or friend on Facebook: