Many of us rely on antivirus software to protect ourselves from threats online. However, antivirus software differs when it comes to factors like protection and speed. We've put together a comparison review of two antivirus providers, Norton and Avast, to help you make an informed decision.
Steve Adams 15+ years experience in the tech, privacy and security space 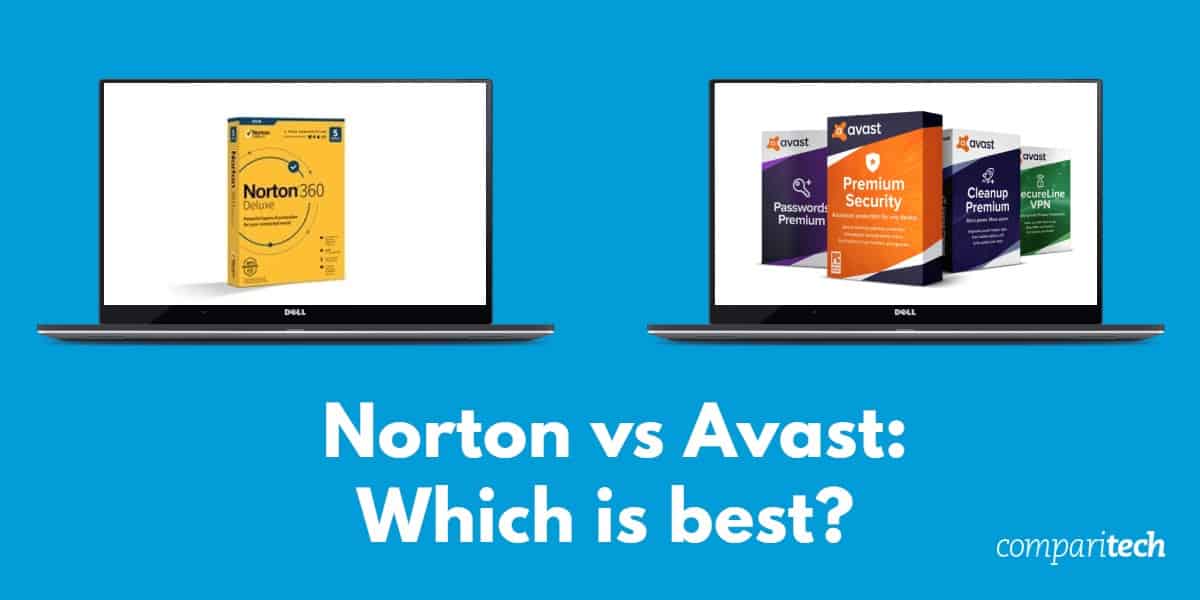 Norton and Avast are among the most popular antivirus products available today. Both boast large numbers of users reaching into the millions. The big question is, which is better?

When protecting your PC and internet-enabled devices against malware and other online threats, it’s worth investigating which antivirus product does the best job.

You might also want to know which one is the best value, and which of the two providers gives you extra features that can help you build a better all-round defense.

This review will put both antivirus products to the test with my own malware detection and protection tests plus a look at some independent research from leading independent antivirus labs. I’ll not only check out the products for how effective they are at neutralizing threats, but I’ll also look at other important considerations like performance and how much scans slow down your machine.

For this comparison, I am comparing similar products from both Norton and Avast. I’ll test out Avast Premium Security Multi-device – 10 devices and Norton 360 Deluxe. Once I’ve carried out tests and looked at the available research I’ll give you my verdict on each program’s protection against malware, ease of use, value for money, and additional security features.

Here’s what I found out on Norton vs Avast:

Norton has been around for 28 years and since 2001, it has been produced by Symantec Corporation in California. Norton had become a global leader in consumer cybersecurity, helping secure the devices and online privacy of nearly 50 million consumers.

Avast is an antivirus brand from the Czech Republic with over 1,700 employees. Avast currently has 425 million active users, making it one of the most popular antivirus programs on the market.  However, the company is not without controversy after a recent news story highlighted that Avast collected and sold user data.

As the tables below show, our comparable products Norton 360 Deluxe and Avast Premium Security Multi-device weigh in at a similar price point, with Norton costing $10 more per year. It’s also worth noting that Norton offers several other higher-priced packages that include LifeLock identity theft protection.

Avast has a simple pricing structure, offering a free basic antivirus and then Avast Premium Security for one or 10 devices. In the US, Avast launched a new product called Avast Omni. This product is designed as a total solution that protects all IoT devices.

At the time of writing, I was offered a very generous 62 percent discount for the first year’s subscription with Norton directly on their antivirus website. Avast, on the other hand, offered me no discount on their website for the first year, but cheaper prices were available if you commit and are willing to sign up for the two- and three-year subscriptions.

I have used both the money-back guarantee from Norton and the 30-day offer from Avast, and can confirm that my subscription fee was refunded in full with no problems.

Both Norton and Avast work with all the major operating systems including Windows, MacOS, iOS, and Android.

I wanted to establish which antivirus would do the best job at protecting my PC against malware, so I ran some tests to see how each program performed.

The first test I performed checked for malware threats in real-time, instead of waiting until a scheduled scan time to check the PC files.

I also ran a second malware test where I downloaded sample malware files from EICAR (The European Institute for Computer Antivirus Research). I turned off real-time detection and ran a full system scan and a quick scan to see how well the malware was detected and quarantined.

To add to my own tests, I checked out some of the most recent antivirus tests managed by the major independent antivirus test labs. The table below compares the test results from both Norton and Avast on my PC when tested with three different live samples and four Eicar samples.

Norton blocked the .txt file and the download from Eicar.com on HTTP but allowed Zip files. On HTTPS the .zip files and the .text files were allowed while the Eicar.com file was blocked.

For the live samples, Norton and Avast both blocked all three.

Next, I wanted to test the quick scan version of the antivirus to see how it performed. I again used the Eicar samples.

To add more depth to my own analysis, I visited a couple of the best known independent AV testing labs and looked up the latest results. For this comparison, I looked at the tests from AV-Test and AV-Comparatives.

During September and October 2019 AV-Test tested the top antivirus brands. Let’s compare the scores for Norton and Avast.

AV-Comparatives False Alarm test is another useful method of comparing the two products and how accurately a file or app is identified as safe or as a threat. The lower the number of false alarms, the better.

False positives occur when the antivirus flags a non-malware file as malware and can be an annoyance.

How much impact an antivirus has on PC performance is an area I like to look at, and is something most users should be aware of. To find out which of the two antivirus programs had the best performance numbers, I captured some data whilst running both a full scan and a quick scan. To help me verify my findings I also looked at the performance scores for both Avast and Norton from some recent independent tests.

The table below shows the results of my test and how long it took to complete, plus the number of items that were scanned.

The time it takes to complete an antivirus scan is affected by a number of factors such as the speed of the PC, the number of files that need to be scanned and the antivirus program that you are using.

Next, I tried running a quick scan with each antivirus. Norton completed the task in 171 seconds while Avast was a fraction quicker, completing the quick scan in 146 seconds.

Next I analyzed the results from some other independent tests. The tests run by independent labs show how each antivirus impacts PC performance during eight common tasks:

Each task is given a rating between very fast and slow.

In the AV-Comparatives Performance Test from October 2019, Norton scored slightly lower than Avast, with six ratings of very fast and two of fast, while Avast scores a rating of very fast in seven of eight tasks.

Norton got top scores in AV-Test’s performance scores from September – October 2019. Norton outperformed many industry averages when run on standard and high-end PCs. Avast also got the same top rating of 6.0 / 6.0.

When it comes to performance, Avast performs slightly better in benchmarking tests, although it is very close. This matches my own tests and experience using both products. There was only a minor impact on speed and performance while I ran a number of tasks on my PC.

The antivirus scanner itself is the main reason to buy the product, but most providers now bundle in a lot of extra features to try and make them stand out.  I’ve looked at what is included in each package to see which offers the best value.

Both Norton and Avast offer some of the same features like webcam protection, a password manager, and advanced firewalls. Below, I’ve highlighted a few of the unique features each product has that I find the most interesting and useful.

PC Cloud Backup 50 GB – This feature allows you to back up your files and photos to the cloud so even if a ransomware attack got through on your system, you would never lose all your data.

Secure VPN – Not many antivirus products include VPN access, so this is a nice bonus. A VPN is most often used to provide privacy online and protect your personal information, making this a good extra layer of safety.

Automatically update apps – Out-of-date software and apps are often a weak point that hackers use to get into your machine. This tool is a great feature that automatically updates your apps and searches for the latest updated releases online.

Safer shopping –  This tool stops hackers from hijacking your router’s DNS to send you to fake sites. This feature lessens the chance of criminals stealing your passwords and banking info online.

Sandbox  – Opening a file that may seem suspicious is dangerous, but if insist on downloading it, the sandboxing tool lets you open files in a safe environment before you let them run on your PC.

Overall, I like many of the extra features from Avast, but feel Norton delivers more value by including a VPN and cloud backup.

The thing I like most about the Norton sign up process was its simple layout and how clear they made the pricing. The first year discount and the regular renewal price are clearly shown, whereas some companies try to hide renewal info in small print.

It was a simple case of entering a few personal details like my name and address and setting up payment. Next, I got the download link to the installer file. Installing the program on my PC was easy. Less than 10 minutes after first launching the website to sign up, I was underway running the full antivirus check on my PC.

Avast Premium offered a similarly simple sign-up and installation. Pricing again was clear but Avast does not offer an automatic discount in the first year.

Before using both programs I got the impression from the branding and websites that perhaps Avast would have a more modern look and feel to the interface compared to Norton.

Overall I found this to be true. Avast uses a clean and minimal design with some bright colors and modern graphics. You are welcomed with the home screen and from here you can run a virus scan, scan for vulnerable software, and see your PC status among other things.

Avast’s support channels include live chat and email. There is a technician phone support option available at an extra cost. Avast also lets users find solutions via self-service, providing a detailed FAQ on its support website.

Norton offers a FAQ, community forum, and live chat support, plus phone support. In addition, social media support is available via the Facebook and Twitter channels. Norton gives customers 24/7/365 support on all of its product tiers.

Overall I am impressed with aspects of both the antivirus products tested here but give the edge to Norton 360 Deluxe.

Norton is slightly more expensive, but not by much and delivers great performance, excellent malware detection rates, plus very useful features such as a VPN.

While Avast performs well and offers some extra features worth noting, the news on Avast selling private data pushes me even further in favor of Norton.