The rates of hate crime and hate speech are increasing, with incidents taking place offline and online. We reveal the latest online hate crime statistics and facts that paint a picture of what we’re dealing with in the digital age.
Aimee O'Driscoll VPN AND CYBERSECURITY EXPERT 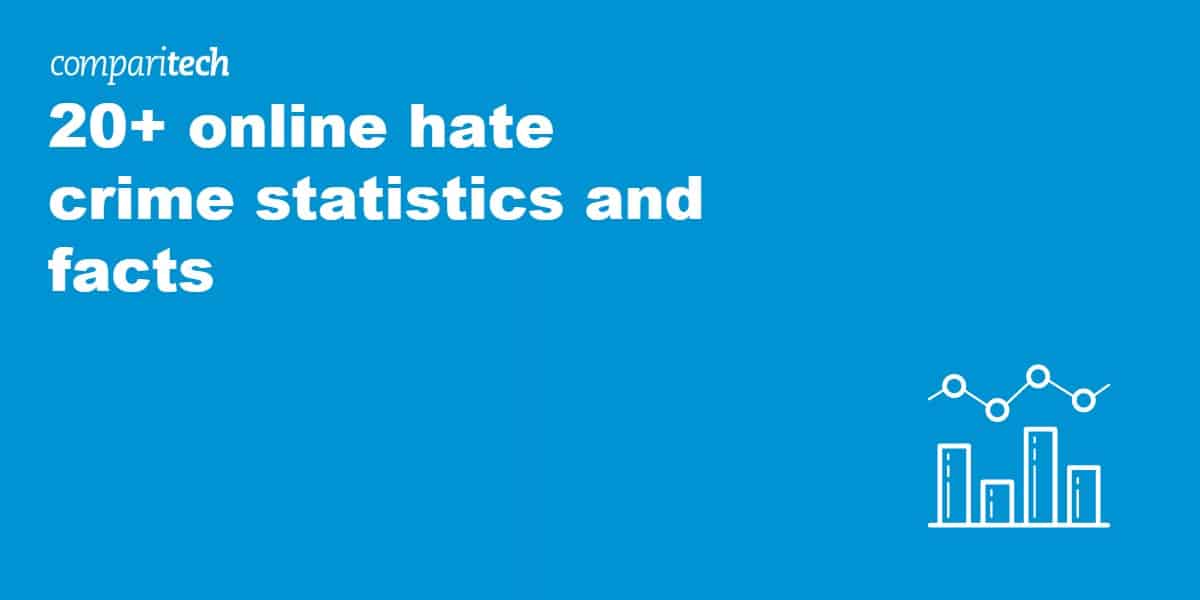 While the definition of a hate crime will vary slightly from region to region, it generally refers to a crime that is motivated by some type of prejudice based on race, religion, sexual orientation, disability, or other grounds. In the US, the rate of reported hate crimes saw an overall decline between 2008 and 2014, but has been gradually increasing since then. It’s widely agreed that hate crimes go vastly underreported, so we’re likely only seeing the tip of the iceberg with the figures at hand.

One place where hate crime occurs is across the internet. Hate speech, which we see regularly online, is not a crime in many regions, but speech that incites violence or hatred often is. Social media networks, as well as other private and public online forums, provide a platform for broadcasting hate speech, including that which incites violence and hatred. What’s more, some of the statistics below indicate a correlation between online hate speech and hate crimes in the physical world.

There is an ongoing debate around the topic of hate speech versus freedom of speech, and what constitutes each. Plus, with underreporting and lack of transparency from some stakeholders—such as some online platforms and law enforcement agencies—it can be difficult for researchers to obtain an accurate view of the landscape. Nonetheless, here we reveal some of the most interesting facts and statistics surrounding hate crimes and hate speech.

1. More than half of 2019 US hate crimes were motivated by race, ethnicity, or ancestry

2. Hate crimes in the US have reached their highest level since 2008

While there was a steady decline between 2008 and 2014 (apart from a slight increase in 2013), the number of hate crime incidents recorded by the FBI has increased steadily since then. 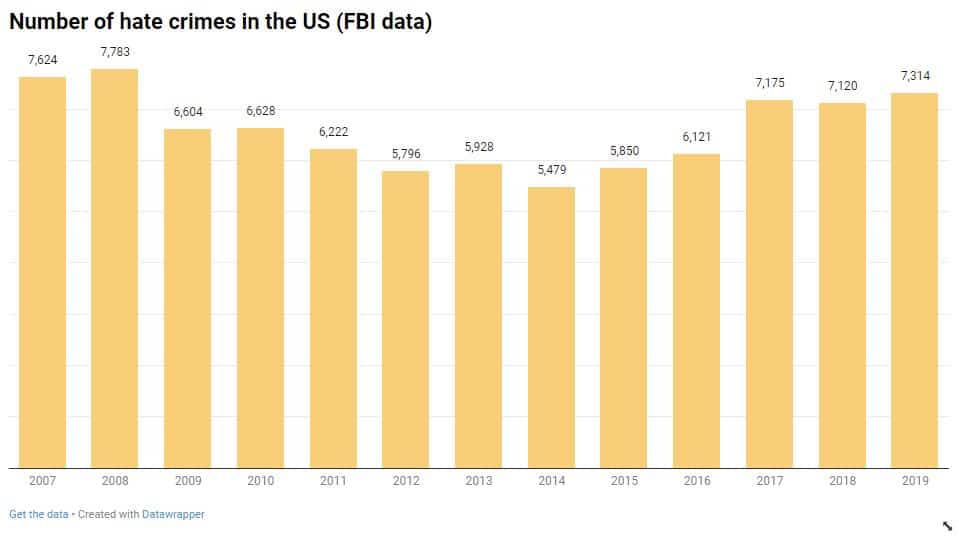 Although the official figure for the number of hate crimes in the US has hovered around 7,000 for a few years, a 2017 Bureau of Justice Statistics survey estimated that the real number could be up to 250,000 per year. The low official numbers make sense given that 87 percent of reporting police agencies had no hate crimes on record in 2017. However, there is concern that some reporting processes are failing and police departments are misclassifying some crimes. One apparent reason for this is that hate crimes are notoriously difficult to prosecute.

4. 2% of UK hate crimes were flagged as being committed online

Since April 2015, it was mandatory to flag offenses committed partially or fully online (via a computer, computer-enabled device, or computer network). In 2017/2018, the portion of hate crime that bore an online flag was two percent. However, there is concern that the flag was underused by law personnel, to the extent that similar data was not even analyzed in subsequent years. This means that the real proportion of online hate crimes could have been much higher.

5. 80% of UK online hate crime involves “Violence against the person”

7. In Canada, 45% of hate crimes are racially motivated

Of the 1,946 hate crimes reported to police in Canada in 2019, 876 (45 percent) of them were motivated by race or ethnicity. 31 percent were motivated by religion and almost 14 percent by sexual orientation. Other motivations including language, disability, sex, and age.

A Leger study found that three out of five Canadians had seen “hateful or racist speech on the internet” or “racist comments in social media.” This number was much higher for young people with 41 percent seeing online hate often and 40 percent seeing it sometimes.

Residents of Saskatchewan were most likely (66 percent) to report having seen racist speech, while Newfoundland residents were the least likely (44 percent). 46 percent of Canadians responded that Muslims were the group most often targeted by racist speech. 81 percent of respondents believe hate speech is a form of violence.

9. 8 in 10 LGBT+ people in the UK have experienced hate speech and hate crime online within the past 5 years

Galop’s Online Hate Crime Report 2020 surveyed 700 LBGT+ people and found 80 percent had dealt with online hate crime and hate speech in the five years prior. It also discovered that half of respondents had experienced abuse online on at least 10 occasions, and one in five LGBT+ people in the UK reported experiencing online abuse at least 100 times.

11. There is a correlation between online hate speech and physical crimes against minorities

This research backs up a similar study conducted between 2015 and 2017 in Germany which found that negative online rhetoric about refugees may have increased the rate of hate crimes against refugees. One more study by NYU focused on discriminatory tweets related to race, national origin, and ethnicity, and found similar results.

12. Twitter hate speech against China and the Chinese increased 900% in early 2020

A study conducted by AI-technology company L1ght analyzed millions of websites, including social networks, gaming sites, and teen chat forums, to examine increases in cyberbullying, hate speech, and online toxicity. It found that between December 2019 and March 2020, in the early days of the pandemic, there was a massive (900 percent) increase in the volume of tweets containing hate speech regarding Chinese people and China.

13. Traffic to posts and hate sites against Asians increased 200%

The L1ght study also found that over that period, the amount of traffic going to specific posts and “hate sites” targeting Asians increased three-fold.

14. Hate speech among children and teens increased in early 2020

Since COVID-19 hit, children have been kept away from many of their regular activities and have been spending more time online, including using social media networks and messaging apps. L1ght reported that during the first round of COVID-19 lockdowns, there was a 70 percent increase in the number of instances of hate speech between teens and children. The study also found a 40% increase in the amount of toxicity found among gamers on Discord.

15. Four US states have no hate crime laws

While most states have hate crime laws that cover a wide range of biases, several states have no set laws against hate crimes. These are Arkansas, Georgia, Wyoming, and South Carolina. And for some states that do have bias crime laws, there is concern that they are not very effective. For example, Utah’s hate crime statute has been referred to as worthless by the district attorney of Salt Lake County.

As part of its transparency initiative, Facebook releases a Community Standards Enforcement Report each quarter. In July–September 2020, Facebook detected and took action on 22.1 million pieces of content containing hate speech. This was a slight decline from the previous quarter figure of 22.5 million, but a sharp uptick from Q3 2019 when only 6.9 million instances were taken action against.

“We currently use AI to proactively detect hate speech in 40 languages, and we are exploring new methods to extend our automatic detection capabilities to more languages and with greater accuracy.”

18. Over 1,000 advertisers boycotted Facebook over a hate speech row

In mid-2020, as part of the Stop Hate for Profit campaign, more than 1,000 companies, including Coca-Cola, Unilever, and North Face, stopped promoting on Facebook, putting a dent in the social media giant’s $70 billion advertising business. The boycott ended once Facebook, along with Twitter and YouTube agreed with advertisers on an acceptable definition of harmful content.

TikTok, the increasingly popular short-form video-sharing app, cracked down on hate speech in 2020. It announced in an August blog post that it had removed well over 300,000 violating videos since the start of the year. It also removed more than 64,000 hateful comments and banned over 1,300 accounts that it found to be posting hateful content.

In October 2020, TikTok began to take a tougher stance against those spreading the QAnon conspiracy theory by banning more related videos rather than simply focusing on specific hashtags.

Later that month, the company announced it would be cracking down further by taking into account symbols and coded language used in hate speech. For example, the number “14” is often used as shorthand for a 14-word slogan popular with white supremacists, and 88 may stand for “Heil Hitler.”

20. The number of Twitter accounts actioned for hateful conduct violations increased 54% in Q2 2019

Twitter regularly updates its hateful conduct policy, including expansions at least once per year over the past several years. In the six-month period following an update in July 2019, Twitter reported a 54 percent increase in the number of accounts violating its policy.