What is Multi-User Multiple-Input and Multiple-Output (MU-MIMO)?

Discover what Multi-User Multiple-Input and Multiple-Output (MU-MIMO) is and how this technology works. We show you how MU-MIMO keeps you connected.
Amakiri Welekwe Technology Advisor | Cybersecurity Evangelist 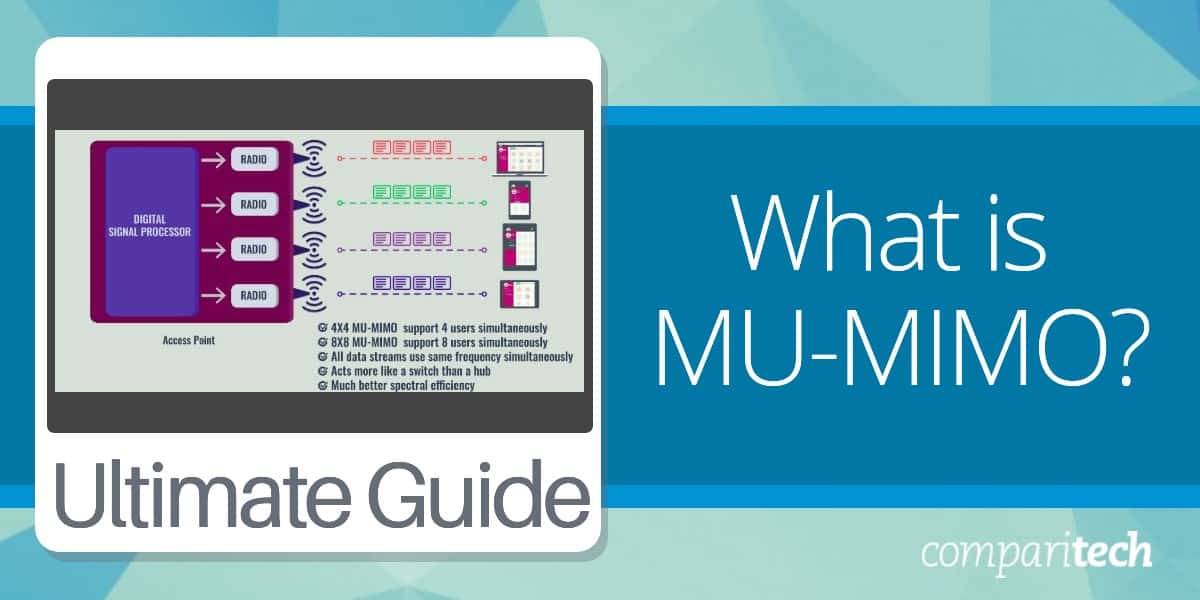 Wi-Fi is a technology that has revolutionized the way we access the internet. Nowadays, with just one wireless router or even a smartphone, you can connect multiple devices in your home or office to the internet with little or no impact on speed. With your smartphone hotspot, for example, you can simultaneously connect your children to their favorite YouTube channel on your smart TV, attend a Zoom meeting and allow other family members to enjoy unhindered internet access on their PCs and tablets with little or no impact on the overall speed. Instead of your smart TV, laptop, and smartphone taking turns to receive internet service from the hotspot, they are able to simultaneously stream or download from the internet. But it wasn’t always like that; in the past wireless access points could only transmit to multiple receivers, one at a time. All that has changed, thanks to multi-user multiple-input and multiple-output (MU-MIMO) technology.

MU-MIMO is a wireless communication technology that allows a single access point to simultaneously communicate with multiple endpoint devices to improve overall efficiency.

In MU-MIMO, the access point device or Wi-Fi router divides the available bandwidth into separate, individual streams that share the connection equally and simultaneously to multiple users. It allows sending and receiving more than one data signal simultaneously over the same radio frequency by exploiting multipath propagation. MU-MIMO operates exclusively in the 5 GHz band; it was created to improve the network capacity and performance of wireless connections.

MIMO was invented by Greg Raleigh in 1996 when he proved that by using multiple antennas and precoding the data, different data streams could be sent at the same time on the same frequency over multiple paths. The term “MIMO” refers to the simultaneous transmission of multiple signals to increase spectral efficiency (capacity). The “multiple-input” represents the presence of multiple transmit antennas; and “multiple outputs” represents the presence of multiple receive antennas. MU-MIMO uses the concept of beamforming to direct signals toward the intended wireless device instead of randomly in all directions to achieve better Wi-Fi ranges, speeds, and network throughput.

To understand how MU-MIMO technology works, you first need to understand how its predecessor, single-user MIMO (SU-MIMO) technology worked. SU-MIMO requires the Wi-Fi devices to have multiple antennas in order to support the sending and receiving of multiple streams. For example, a wireless router that transmits and receives data using two antennas can handle two clients simultaneously. A four-antenna wireless router can handle four simultaneous transfer streams with four clients. Any device that supports more streams will work with any device that supports less (and vice versa), but overall performance will be limited by the less supported device. The SU-MIMO enabled access point depicted in the diagram in Figure 1.0 below has two radio transceivers and two antennas. With this access point, we can support two data streams.

However, the network behaves very much like a hub, as we can only transmit data to the receiving network devices one at a time. We can’t transmit data streams in parallel to both computers at the same time; each system has to take its turn to receive data streams. Of course, larger numbers of users can be supported within the network, but they’re all going to have to take their turn to receive and send data. When new devices connect to the network, waiting becomes even longer. As a result, the more client devices you connect to the SU-MIMO wireless network, the more latency increases and transfer rate decreases for each device. You may not really notice that the access point is taking turns serving each client device, other than perhaps seeing the effects, such as slower download speeds and jerky video streams. Now, this is where MU-MIMO technology stands out.

With MU-MIMO a better spectral efficiency can be achieved and the quality of experience for the users can be greatly enhanced. A wireless router can transmit to and receive data from multiple Wi-Fi client devices at the same time. Although the network devices must also support MU-MIMO to utilize it, they aren’t required to have multiple antennas or perform as much advanced signal processing as SU-MIMO requires.

The MU-MIMO enabled access point depicted in the diagram in Figure 2.0 below has four radio transceivers, and four antennas, each transmitting four different streams of data in parallel on the same frequency. This in contrast to SU-MIMO acts much more like a switch than a hub. The client stations made up of two tablets, a smartphone, and a laptop are able to receive data in parallel from the access point on the left. You could have many more client devices supported by the network in parallel at any instant in time without compromising efficiency. A 4×4 MU-MIMO network can support up to four users simultaneously; an 8×8 MU-MIMO network can support up to eight users simultaneously. You can think of MU-MIMO connections like adding delivery trucks to a fleet. Each truck can be sent to different customers, in different directions, all at the same time. MU-MIMO works best with stationary Wi-Fi client devices. If you’re walking around your home or office while streaming video on your smartphone, you’re not going to get the full benefit of MU-MIMO even if your device supports it.

The evolution of MU-MIMO technology in wireless standards

Each new wireless standard released in the past has attempted to improve the performance of Wi-Fi networks. In 2009, when the Wi-Fi 4 (IEEE 802.11n) wireless standard was released to the market, the SU-MIMO technology came along with it. It was the first standard to introduce the concept of MIMO technology with speeds up to 600Mbps. This allowed Wi-Fi routers and client devices to simultaneously transmit or receive multiple streams of data between each other, thereby increasing the speed of the connection. Wi-Fi 4 also introduced the idea of beamforming into the Wi-Fi network, but it wasn’t really used very effectively with this standard because it was operating very much like a hub architecture.

In order to overcome the limitations of the Wi-Fi 4 standard, the Wi-Fi 5 (IEEE 802.11ac) standard was introduced in 2014 to the market. The Wi-Fi 5 significantly improved the speed of connection up to 3.46 Gbps. To achieve this kind of performance, Wi-Fi 5 operates exclusively in the 5 GHz band instead of 2 GHz and supports up to eight (8×8) simultaneous data streams instead of 4×4 like Wi-Fi 4. Most importantly, Wi-Fi 5 introduced the idea of MU-MIMO technology to support multiple users in parallel. The combination of MU-MIMO and beamforming ensured that data streams were directed at specific devices, which supercharged the overall performance of the Wi-Fi network.

The Wi-Fi 6 (IEEE 802.11ax) standard released in 2019 is the current evolution in the Wi-Fi standard. It was introduced to help mitigate the performance issues associated with having a lot of Wi-Fi devices on a single network, especially in very dense environments such as university campuses, event centers, or urban apartment complexes where many clients require Wi-Fi internet access. Wi-Fi 6 significantly improved the speed of connection up to 9.6 Gbps and supports uplink (UL MU-MIMO) capability, so that multiple users can do uploads simultaneously, in contrast to Wi-Fi 5 which supports only downlink connections.

Wi-Fi 6 upgrades the MU-MIMO technology in previous wireless standards. The combination of MU-MIMO and OFDMA (Orthogonal Frequency Division Multiple Access) holds the key to the much-touted performance of Wi-Fi 6 connections. OFDMA divides the radio channel into a large number of closely spaced sub-channels to provide more reliable communications at faster speeds. You can think of OFDMA as being able to use any one truck in your fleet to deliver goods to multiple locations. The goal is to quickly get more out of every data transmission that carries a Wi-Fi signal from a router to your device. The combination of MIMO and OFDMA guarantees higher data rates. MIMO-OFDM is the foundation for most advanced wireless LANs, and the dominant air interface for 4G and 5G mobile broadband network because it achieves the greatest spectral efficiency and data throughput.

The next upcoming generation in the evolution of wireless standards is the Wi-Fi 7 standard, which promises better speeds of up to 30Gbps. The Massive MIMO–which among other things extends the legacy MIMO by a massive increase in the number of antennas, Cooperative MIMO (CO-MIMO)–which groups multiple devices into a virtual antenna array to achieve MIMO communications, and possible improvements in uplink (UL MU-MIMO) and digital signal processing capabilities are currently the focus of research in this area, especially in relation to 5G network.

There’s also a growing number of new laptops that are being shipped with 8×8 MU-MIMO enabled Wi-Fi 6 as the default standard. Some of the leading brands include HP Spectre x360, Dell XPS 13 (2020), Lenovo Yoga c940, and Asus Chromebook Flip c436, among others. Even the smartphone industry is not left behind in the race to incorporate the latest MU-MIMO/Wi-Fi 6 standard in their products. Samsung was the first with the Galaxy S10 series. Others such as Apple (iPhone 11), Motorola (Motorola Edge Plus), LG (LG V60 ThinQ), and Huawei (Huawei P40 Pro), etc., followed suit.

As the number of data-hungry devices in a single network continues to surge through the implementation of BYOD policies, IoT, and other client devices, satisfying the demands of each one of these client devices while keeping performance at optimal levels becomes more and more challenging. Ultimately, the only guaranteed path to easing the burden of managing overcrowded wireless networks, and augmenting network performance is by embracing the cutting-edge solutions of today, which for the time being happens to be MU-MIMO technology.

Does MU-MIMO make a difference?

Yes, MU-MIMO does make a difference. But it isn't necessarily about achieving top internet speeds, as most people wrongly assume. MU-MIMO is all about improving the wireless network when a lot of devices are connected. The power of MU-MIMO becomes apparent when you have a large number of users in a single wireless network. It ensures that the internet speed does not degrade in spite of increasing numbers of users.

Yes it does. But in order to enjoy the full benefits of Wi-Fi 6 routers, you’ll need Wi-Fi 6  devices. Although you could still see some benefits connecting with Wi-Fi 5 gadgets because the Wi-Fi 6 router is capable of communicating with more devices at once. However, overall performance will be limited by Wi-Fi 5 devices.

What devices are MU-MIMO compatible?

What devices are MU-MIMO compatible?

Laptops running Windows or Mac OS can be MU-MIMO compatible. The capability is not automatically available in all devices because it requires the physical presence of an antenna and the deployment of a suitable WiFi standard. IEEE 802.11ax WiFi protocols include support for MU-MIMO. Look for a sticker on the device’s box that says “WiFi 6” because that implements MU-MIMO. Other indicators to look out for are the terms 1x1 MIMO, 2x2 MIMO, or 3x3 MIMO. These labels explain the number of antennas the device has and the number of simultaneous streams it can handle. This capability is available in a range of consumer electronics, such as tablets, phones, and smart devices.