What is formjacking and how can you prevent it?

Formjacking is used by cybercriminals to take over a website’s form page and steal user information. Find out more about this practice could affect you and how to prevent it.
Aimee O'Driscoll VPN AND CYBERSECURITY EXPERT 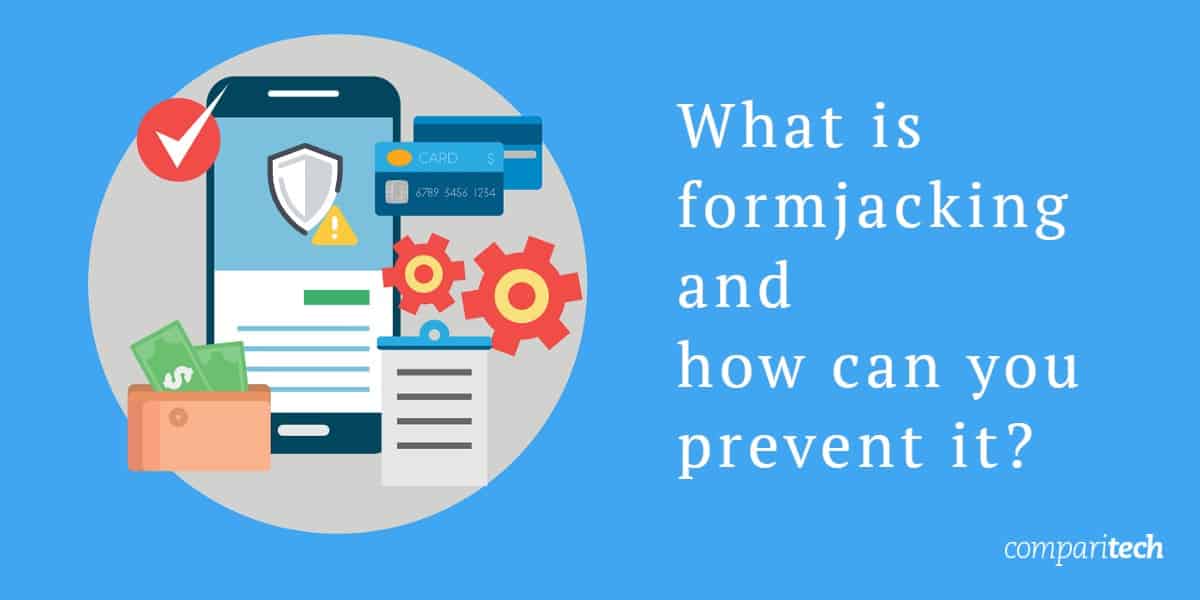 Formjacking involves the use of malicious JavaScript code to steal personal and financial information from website forms. Cybercriminals attack the form page itself, then each time someone fills out a form, a duplicate of the entered information is sent to the attacker.

This practice can affect any organization that accepts online payments from customers. It puts consumers at risk of credit card fraud, identity theft, and other types of fraud, and can be damaging for a company’s reputation. Formjacking is discreet and doesn’t require any user action, so it’s a very attractive option for cybercriminals looking to make some easy money.

In this article, we reveal more about how formjacking works, including some real-world examples, and how to prevent it.

Formjacking can be thought of as new-age card-skimming. You’ve probably heard about the scenario in which a small device — known as a skimmer — is added by criminals to card readers at a point of sale. This device can read and store information from the card’s magnetic strip. Heavily targeted card readers include those at ATMs and gas pumps. These are easily accessible compared to, for example, a card reader located alongside an in-store cash register.

Formjacking follows a similar concept to card skimming but has been adapted to the online world. This makes the practice more far-reaching than skimming and easily accessible to cybercriminals across the globe. Formjacking is relatively simple to execute, another likely reason it’s becoming increasingly attractive to data thieves.

An attack begins when they insert JavaScript code into the target website. Note that it usually takes the form of a supply chain attack and targets code provided by a third party, not the website itself.

Once the malicious code is in place, when the user enters their information and sends the form to the website, all details are also sent to the attacker. 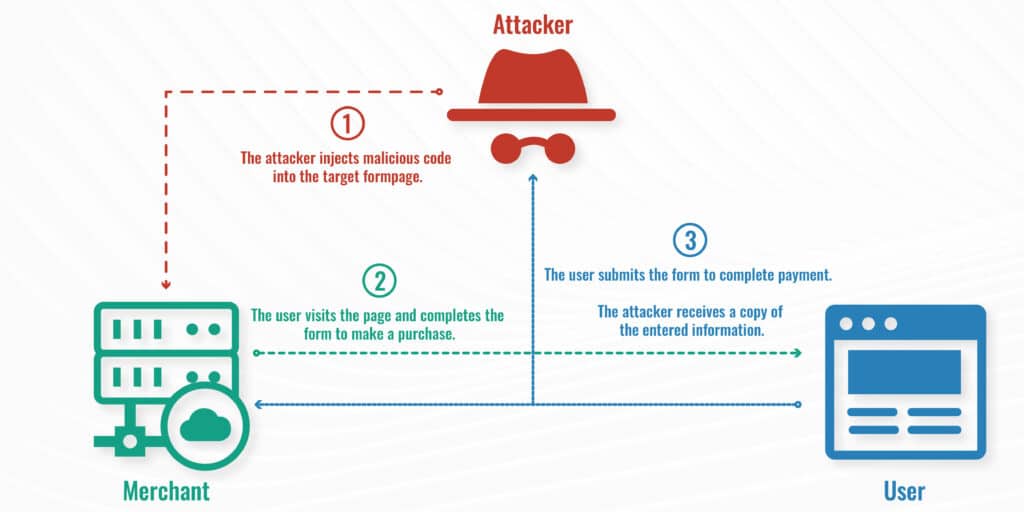 When the user hits “Submit” or the equivalent, the transaction goes through as normal so there’s no sign that anything is awry. This is why it’s difficult for either the user or the website owner to detect formjacking until it’s too late.

How concerned should we be about formjacking?

Formjacking has been on the rise in recent years. In its 2019 ISTR report, Symantec reported having identified an average of 4,800 websites each month that had been compromised using formjacking code. In 2018, Symantec blocked a whopping 37 million formjacking attempts.

Criminals typically use formjacking to target websites that collect payment information such as e-commerce sites. While personal details can be valuable to criminals, payment data is especially sought-after. Criminals can either use credit card and billing information directly in credit card fraud or they can sell the details to the highest bidder.

Formjacking can be highly lucrative. According to Symantec a set of credit card details can fetch up to $45 on the dark web. When you consider criminals can steal the details of thousands of cards from just one site, this quickly adds up.

As a consumer, there are a few ways you might find out that you’re a potential victim of a formjacking attack. You may be contacted by the company involved directly or find out from a news report or announcement. For example, British Airways took out ads in newspapers as part of its attempts to alert (and apologize to) users after a formjacking attack.

Alternatively, if your credit card details have been used, you may find out through your bank, either by noticing unusual activity on your card yourself or having your bank contact you directly.

So what types of websites are under attack? To illustrate this growing problem, here are some real-world examples of formjacking attacks:

Many attacks appear to have involved a cybercriminal operation dubbed Magecart. This is a consortium of hacking groups that target online checkout systems. They usually target the Magento system, hence the name Magecart.

The formjacking attacks affecting British Airways, Ticketmaster, and Newegg were all attributed to the Magecart group.

How consumers can prevent formjacking

Many of us complete online transactions on a daily basis without a second thought, assuming the websites we’re using are secure and have our backs when it comes to protecting our information.

Thankfully, there are a couple of ways we can have a bit more control over the security of our payment information.

One is to consider using a masked credit card. These cards, offered by certain financial institutions, provide you with a set of card details for one-time use, either online or in a store. Once the details have been used, they are no longer valid for future purchases. Masked credit cards are often misleadingly referred to as “fake” credit cards, but they are legitimate forms of payment.

Another option is to look into payment methods that use tokenization. This is another way to add an extra layer of security to credit card payments and is used by systems like Apple Pay and Google Pay. The concept is similar to a masked credit card and a “token” is used to replace the real credit card number. 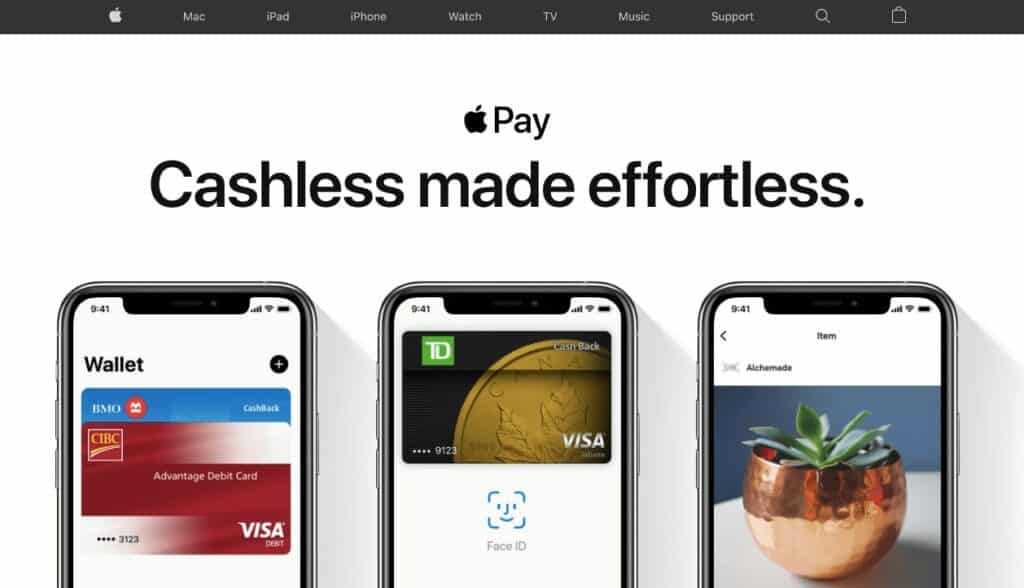 How consumers can detect and deal with formjacking

Formjacking is often difficult to detect, but there are some steps you can take to find out sooner rather than later and mitigate the resulting damage.

How businesses can prevent formjacking

Do you run a website that accepts online payments? Although our real-world examples above include some ecommerce giants, there have been reports of businesses of all shapes and sizes coming under attack. There are some steps you can take to avoid this nasty attack happening on your site.

Even with all of these measures in place, it can still be extremely tough to spot formjacking until it’s too late. As such, you need to ensure you have protocols in place for swiftly alerting customers in case of an attack.