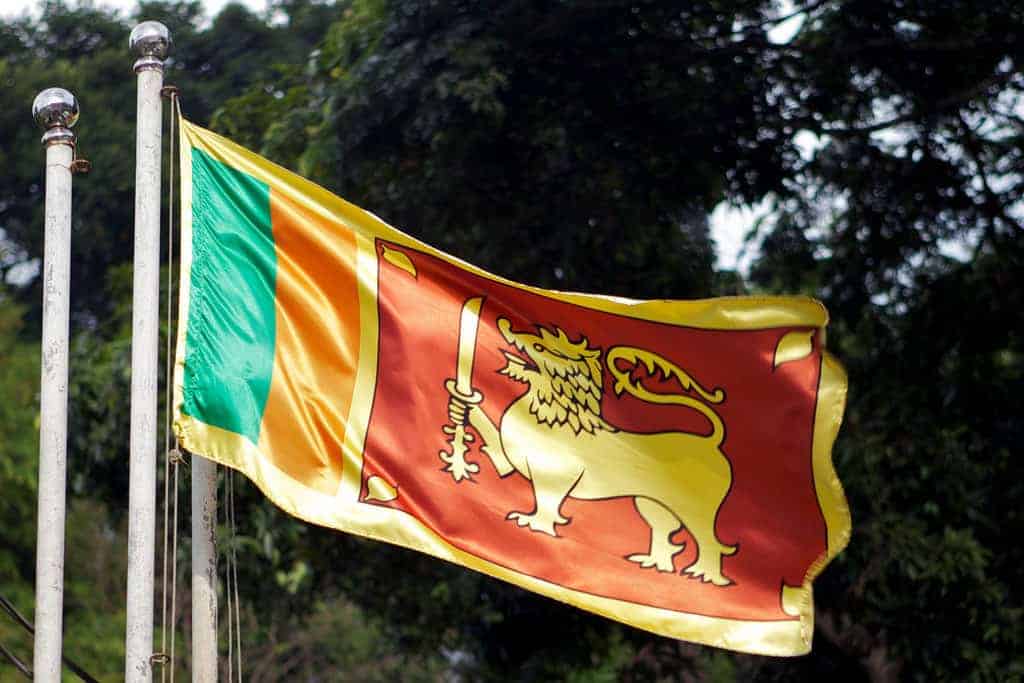 Sri Lanka’s overall internet freedom score has improved in the past few years, but it still remains a considerable distance behind Western standards.

Mass civil unrest in the South Asian country in March 2017 prompted the government to ban Facebook, WhatsApp, Instagram, and Viber. Government spokesman Haridra B. Dassanayake said that the decision to block access to these sites came after an understanding that the platforms were complicit in spreading and amplifying hate speech.

It’s because of these reasons that you should consider using a Virtual Private Network (VPN) while trying to access the web in Sri Lanka. The use of a VPN will bypass censorship on sites and apps, protect your privacy, and unlock a host of geo-restricted content such as Netflix, Hulu, ESPN, and BBC iPlayer.

How a VPN operates is pretty straightforward. The software sets up an encrypted tunnel which routes all the internet traffic to and from your device via an intermediary server. In this scenario, it’s almost impossible for hackers or government agencies to snoop on your online behavior. That’s a sigh of relief, given how prevalent privacy issues are these days. Opting to use a VPN is perfectly legal across most parts of the world, with the exception of Iran, North Korea, and possibly the UAE.

We provide a lot of detail on each of the VPNs that we selected for this article, but if you only have time for a summary, here is our list of the best VPNs for Sri Lanka:

Not all VPNs are born equal — some suffer from poor security while others are slow and unreliable. In this article, we reveal the best VPNs for Sri Lanka based on the following factors:

Here is our list of the best VPNs for Sri Lanka:

ExpressVPN leverages robust encryption standards. It uses 256-bit AES-CBC with utilization of both HMAC authentication and perfect forward secrecy. Additional security features include an internet kill switch (the company refers to it as a ‘network lock’) which will temporarily stymie all web traffic if the connection to the VPN drops unexpectedly.

We’ve mentioned before how the Sri Lankan government is clamping down on the free and open web. It’s possible that they’re also trying to monitor the content of your communications. Privacy advocates should feel reassured if they opt for ExpressVPN because the provider has a stated policy of not storing any user data. There’s a sliver of metadata retention but the company insists that it engages in this practice simply to improve service levels and individual IP addresses are never logged.

When it comes to server networks, ExpressVPN offers a gargantuan list of options. There are over 3,000 servers spread across 148 locations in 94 countries. There’s an option to connect to servers in Sri Lanka too which is handy for local residents trying to access local content and banking services when traveling abroad.

This is a speedy, reliable VPN service that won’t let you down. ExpressVPN evades the Netflix ban on VPNs with ease and is similarly compatible with BBC iPlayer and Hulu. It also supports torrenting.

Apps for Android and iOS are available as well as desktop clients for Windows and MacOS.

The company adheres to a strict zero-logs policy. This means it will not store any user data related to sessions, traffic, or timestamps.

There have been a few instances where NordVPN received official requests to hand over user data from government surveillance agencies. But its no-logs policy helped it evade these summons. Servers were confiscated in at least one instance, but there wasn’t any incriminating data that could be extracted from them. NordVPN is incorporated in Panama which means it doesn’t have to automatically comply with any data retention laws.

Its server network is similarly robust. In total there are almost 5,200 servers to choose from spread across 60 countries. You can select one for a specific purpose such as anti-DDoS, video streaming, double VPN, Tor over VPN, or dedicated IP.

This provider supports most online streaming services including Netflix, Hulu, and BBC iPlayer. It’s also compatible with torrenting. A single paid subscription allows for six simultaneous connections, which is one more than the industry standard of five. NordVPN’s service is speedy and reliable – exemplified by the fact that the service has been in operation for the better part of a decade.

Apps for Android and iOS are available as well as desktop software for Windows and MacOS.

Read our review of NordVPN.

Ever since its acquisition by a UK-registered firm last year, CyberGhost has made a concerted effort to amp up the quality of its service. There’s a much higher number of servers, firmer encryption, and better speeds.

CyberGhost uses 256-bit AES encryption on the OpenVPN protocol by default, along with 2,048-bit RSA keys and MD5 HMAC authentication. An internet kill switch is included too, which acts as an additional security layer.

This provider has a stated policy of not storing any data, so that should ease privacy concerns. The company is originally registered in Romania which means it’s safely out of the reach of any data retention laws.

At the moment there are 3,800 servers online spread across 60 countries. Sri Lanka isn’t included but there are plenty of options in Asia, Europe, and North America. This service can reliably unblock a host of streaming services, including Netflix. A single subscription can host up to 7 devices at any given point in time.

Cyberghost offers apps for Android and iOS as well as a desktop client for Windows and MacOS.

Good Value:CyberGhost is great for beginners. Great privacy and security. Reliable but can struggle with popular streaming sites. 45-day money back guarantee.

IPVanish follows a similar trend when it comes to securing your connection. The encryption standards it uses are rigid: 256-bit encryption on the OpenVPN protocol by default, SHA512 authentication, and a DHE-RSA 2,048 key exchange with perfect forward secrecy. The latter feature means that even if hackers gain access to your account, all your past web sessions will remain encrypted and secure. An internet kill switch is also included by default.

This company is registered in the US which might be disconcerting for some users given the Snowden revelations and the recent Cambridge Analytica leak. However, since this provider is completely logless, all web activity is hidden. This includes session history, choice of servers, and bandwidth utilized.

At the moment, IPVanish offers more than 1,300 servers in 75 locations worldwide. There’s no option to connect to a server in Sri Lanka, but there is a large selection of servers in Asia, Europe, and North America.

IPVanish can unblock various streaming services including BBC iPlayer and ITV Hub. It also permits torrenting on all servers. Many users find IPVanish to be an excellent option for Kodi because it allows them to download the Android APK directly to their device. The interface is also remote control-friendly for Kodi devices that lack a keyboard and mouse. An IPVanish plan allows up to five simultaneous connections.

UP TO 10 DEVICES:IPVanish is a good family choice. Handles simultaneous connections. Recommend for their high standard of privacy, but keep shopping if you want to unblock Netflix. 7-day money back guarantee.

PrivateVPN is a relative newcomer to the VPN space but don’t let its diminutive stature trick you. The service is fast and packs a punch, with stringent encryption and the ability to unblock a number of geo-restricted streaming services.

You can opt for 128 or 256-bit encryption, depending on your chosen protocol. All packages incorporate perfect forward secrecy, DNS leak protection, and an internet kill switch. Leakage of your private data seems to be a far-fetched scenario.

At the moment there are 56 servers spread across the world. Sri Lanka isn’t included in the offering but there are a handful of Asia servers. PrivateVPN reliably unblocks Netflix, Hulu, ESPN, and BBC iPlayer.

A single subscription will grant access to up to five devices at all times. Apps are available for Windows, MacOS, Android, and iOS.

Fast Servers:PrivateVPN is a solid all-rounder. Unblocks social media content, most chat and popular streaming services. Could do with having more servers and lacks 24/7 support. 30-day money back guarantee.

Read our review of PrivateVPN.

Should I use a free VPN in Sri Lanka?

Our recommendations on this list are paid options, meaning you’ll have to sign up with a credit card, PayPal, Bitcoin, or other available payment option. These services are meant to offer a premium experience, unencumbered with issues like sluggish speeds, weak encryption, or limited server offerings.

On the other hand, be prepared to face all these issues and more if you opt for a random free VPN. Some providers have been caught tracking and mining user data to sell to advertisers for a profit. Others have engaged in more egregious acts, like utilizing idle bandwidth to generate a massive botnet.

Since the web is under threat in Sri Lanka, it’s probably worth coughing up a few dollars to make sure your privacy and anonymity aren’t under threat. The last thing you want is for your ISP to snoop on your behavior.

Is torrenting legal in Sri Lanka?

The use of torrents sits in a legal grey area in the island country. You can indulge in downloading torrents as long as you don’t use it to access copyrighted material. The practical implications of this are that any open source software or royalty-free media can be safely consumed, but not the newest Taylor Swift song.

So far there haven’t been any arrests in Sri Lanka for downloading torrents but it’s better to be on the safe side. A VPN is a good bet to cover your digital footprint and ensure your ISP can’t figure out what you’re doing.

Comparitech does not condone or encourage any violation of copyright restrictions. Please consider the law and risks of piracy before engaging in this act.

How do I blog anonymously in Sri Lanka?

Sri Lanka has a troubling history of jailing web journalists, according to Freedom House. Previous legislation known as the Prevention of Terrorism Act (PTA) was used to imprison activists and those critical of the state.

These laws have now been replaced by a new counter-terrorism framework, and a National Human Rights Action Plan is under consideration by the government, reportedly at the behest of Western administrations. Despite these modest improvements, activists and legal scholars insist that the new regulations contain provisions that have the potential to limit freedom of expression. There are concerns regarding whether or not the law will be applied in a fair and just manner.

So far we haven’t come across any new threats to journalists or human rights activists. But this isn’t a far-fetched scenario. Repressive governments across the world have consistently twisted laws to jail opponents and snuff out attempts to question a totalitarian grip on power. As such, if you’re a journalist, whistleblower, blogger, or human rights activist in Sri Lanka, you may want to hide your identity on the web. Our guide to blogging anonymously is a useful read if you’re looking to tread down this path.