There are a lot of great network monitoring tools available on the market. However, after reading through all of the sales details, you get to the point of wanting to buy and then find out that the software will only run on Windows or Windows Server. If you only have Linux servers and don’t want to mix the environment by adding on a Windows Server, then you have wasted time reading through a description of network monitors that you can’t install.

If you just want to keep your environment all Linux, you have three options when looking for a network monitor:

In this review, we will pick examples from all three of these categories. However, most of the network monitoring tools on our list will install on a Linux server.

Here is our list of the eight best Linux Network Monitoring Tools:

What is Linux network monitoring?

Networks are run on protocols that are operating system-independent. The most common form of a network system in the world is TCP/IP. This interfaces very easily with internet connections because the IP part of TCP/IP stands for Internet Protocol.

The majority of network monitoring systems use the Simple Network Management Protocol (SNMP) for their operating procedures. SNMP is not reliant on one particular operating system. All network devices already have one part of the SNMP system pre-installed on them when you buy them. This is the SNMP device agent. The only element missing from the monitoring system is the SNMP manager. So, network monitoring tools provide that the SNMP manager function. This enables them to gather all of the device statistics and traffic information that the device agents compile.

Another great feature of these SNMP-based network monitoring tools is that the device agent will send out a warning if they detect problems. These warnings, called traps, can be interpreted into alerts in the network monitoring tool. Alerts enable the IT support team to leave the monitor to watch over the network and assume that everything is OK unless notification to the contrary arises.

The only distinctive feature of a Linux network monitoring tool is that it can be run on or accessed from a Linux computer.

Pay attention to the descriptions of these tools that we recommend because not all of them require an installation on a Linux computer.

There is also an option that has a Linux operating system bundled into it, so you can install it on a new bare metal server without having to go through the process of installing Linux separately first.

N-Central is suitable for small and middle-sized businesses and it can also be used by Managed Service Providers (MSPs) when supporting the networks of clients. The service can manage remote sites and allow the management of several sites through the same interface. It can also monitor cloud resources and internet connections to them.

As well as monitoring the network, N-central can monitor endpoints and servers. Monitored devices can be running Linux, macOS, Windows, or Windows Server. It is also possible to manage mobile devices through the N-central system. The Mobile Manager enables mass configurations of mobile devices, rapid onboarding, device location tracking, and remote locking and wiping.

The system starts its service by exploring the network and logging all of the devices connected to it. This autodiscovery feature compiles a device inventory and will also draw up a network topology map automatically. The inventory and map are constantly updated and will change to reflect any alterations in the network. In the dashboard, the topology view of the network has a device summary list next to it with the status of each device displayed in traffic light colors for rapid problem recognition.

The security tools included with N-central include a patch manager and a backup manager. Network security in the bundle gives a firewall, web protection access management, disk encryption, and intrusion detection. There are also endpoint detection and response agents to protect each computer on the network.

There is also an Automation Manager included in N-central that allows network managers to set automatic responses to detected problems.

SolarWinds N-central is our top pick for Linux network monitoring because it has the CentOS Linux operating system built into it. The service can monitor Linux servers and endpoints as well as devices running firmware, Windows, and macOS. The network management bundle extends to mobile devices and the whole network infrastructure, whether local, remote, cloud-based, or hybrid gets protected by security monitoring as well.

Get a 30-day free trial: https://www.solarwindsmsp.com/products/n-central/trial

Paessler PRTG is one of the leading infrastructure monitoring systems but it is written for Windows Server. If all of your environment is Linux, you can still use PRTG in its SaaS form. Paessler offers a hosted PRTG, which eliminates the need to install the software on your own servers.

PRTG monitors networks, servers, and applications. However, the system is composed of a series of monitoring services and the user can decide which of these to activate, thus tailoring the service. So, it is possible to limit the system to just network monitoring.

The network monitor in PRTG has a range of options. The main service is based on SNMP and it includes an autodiscovery service. This creates a device inventory and draws up a network topology map. The PRTG system is also very good for monitoring virtualizations because it watches the dynamic allocation of VMs to servers.

OpManager is an SNMP-based network monitor and the central tool in a suite of infrastructure management systems produced by ManageEngine. This software can be installed on Linux and Windows Server.

The tool includes an autodiscovery feature that identifies all devices connected on the network and logs them in an asset inventory. The inventory database forms the basis for a topology map. Both the topology map and the inventory are updated live in line with any changes to the network.

The monitor is able to observe wireless networks as well as on-site LANs. It can include coverage of Cloud services and remote networks as well. OpManager can also monitor hypervisor implementations of VMWare, Hyper-V, and Citrix Xen.

The system watches over network activity, so department technicians can work on other priorities. OpManager raises an alert when problems arise. These alarms appear in the system dashboard and can optionally be sent out to key staff members by email or SMS. It is possible to access the system dashboard through a mobile app, so technicians out on call don’t need to dash back to the office to see what’s wrong.

OpManager is free to use to monitor up to three devices. ManageEngine offers the full system on a 30-day free trial. 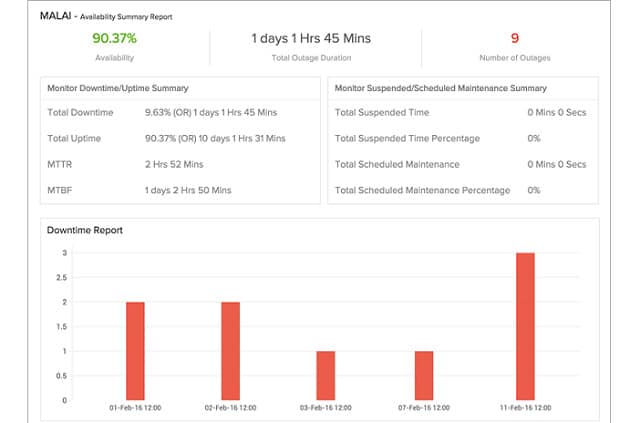 Site24x7 is a cloud-based network monitoring system. Its creators are the same people behind OpManager – both Site24x7 and ManageEngine are divisions of Zoho Corp. This service uses SNMP to monitor the health of network devices. As a cloud service, it doesn’t matter where those devices are, so the system can manage multiple sites and link them together as one WAN monitoring service. The tool can also monitor wireless networks and include cloud services in the network.

The main detection system discovers all devices connected to the monitored network and logs them. This list of devices is available for examination in the dashboard of the service. It is also the foundation of a network topology map, which gets drawn up automatically. The network inventory and map are kept up to date with any changes in the network.

Among the systems that the monitor will check on are VPNs, firewalls, UPSs, printers, load balancers, switches, routers, endpoints, servers, and storage devices.

The monitor converts SNMP traps into alerts, which will appear in the dashboard and can also be delivered by email and SMS. Technicians can access the dashboard through any standard browser or a mobile app.

Site24x7 is charged for by a subscription. The charging structure is quite complicated with a base fee levied per year and then a series of feature add-ons. You can get a 30-day free trial of Site24x7 Network Monitoring.

Datadog is a cloud-based network monitor so it can be accessed from any operating system through a standard browser. This service requires an agent to be installed on the monitored network and it can cover remote sites and cloud services as well as your home network.

This is an SNMP-based network monitor, so it includes alerts, derived from trap messages. The Datadog Network Monitoring service explores your network, documents all devices, and draws up a topology map. Both the inventory and the map get updated automatically when devices are added, moved, or removed.

The dashboard shows summary data of live performance metrics, which can all be drilled down to detailed views of each device. The screens also include attractive graphs and charts. Those metrics get stored for historical analysis.

The network monitor also tracks traffic volumes and it can map hypervisor implementations and record all container activity.

The online monitoring system is charged for by subscription with a charge per host per month. You can get a free trial to examine the system without obligation. 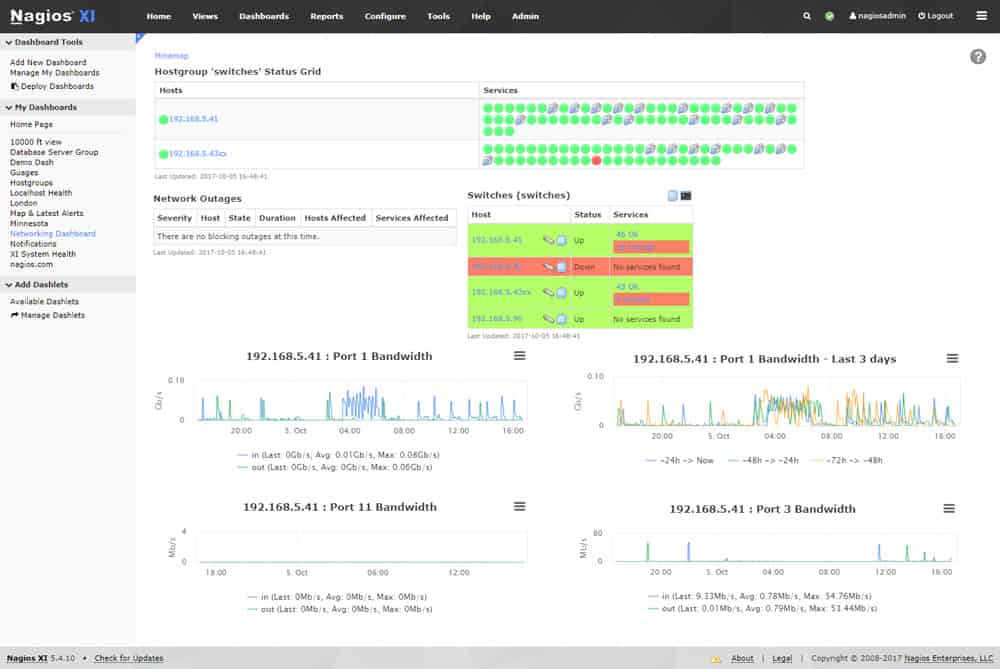 Nagios XI is a full infrastructure monitoring system and it runs on CentOS or RHEL Linux. The system is based on a free, open-source project, called Nagios Core. There is a very large user community for Nagios and many other users produce extensions for the system, called plugins. Third-party software producers have also created plugins to enable their products to integrate with Nagios. So, this network monitor is very flexible – there are thousands of plugins for it.

The monitoring tool will cover networks, servers, and applications. The network monitor has its own communications protocol, so it doesn’t use SNMP. However, there is an SNMP plugin available. The dashboard shows live device statuses and system alerts. The service also monitors bandwidth usage and event log messages.

Nagios XI is available in two editions: Standard and Enterprise. Extra features in the Enterprise edition include capacity planning and auditing.

You can get a 30-day free trial of Nagios XI.

Zabbix is a free infrastructure monitoring system that can be installed Linux. It is also available for Windows, macOS, and Unix. Despite being free, the Zabbix dashboard has a very professional look and feel. The screens are well laid out and feature attractive data visualizations.

Zabbix can monitor LANs, wireless networks, Cloud-based resources, and remote sites. Communications with remote data collectors are encrypted. The service starts its monitoring by tracking down all devices connected to the network and listing them in an inventory. This is a continuous process so all changes to the device inventory are detected immediately.

This is an SNMP-based system, so it also features alerts. Status alerts are shown in the dashboard and can also be set up to be sent through email, SMS, or chat app. Alerts can be customized and a task automation feature can be triggered by an alert. Other non-critical tasks can also be set to run on a schedule. 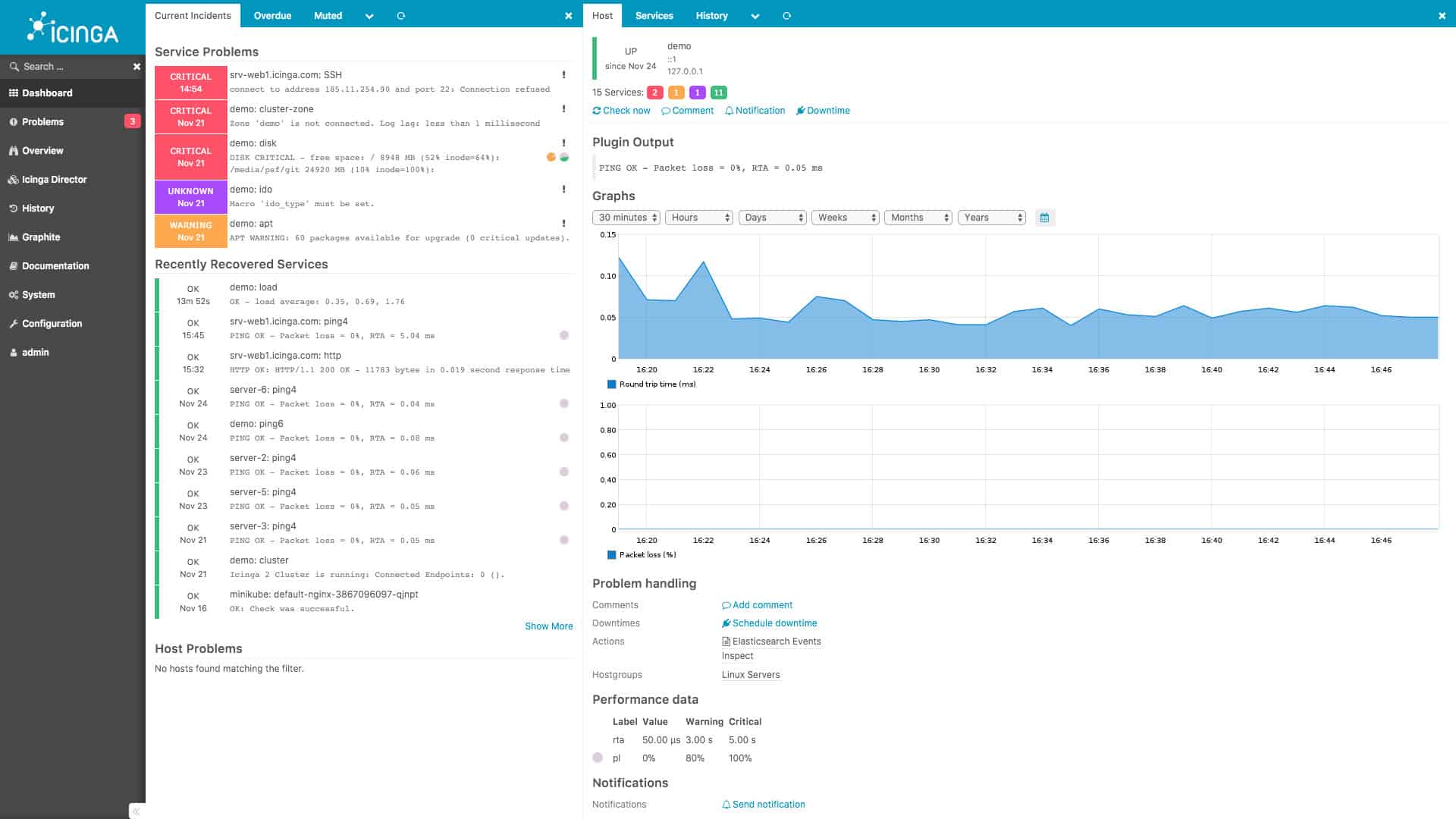 Icinga 2 was developed from a fork of Nagios Core. This enables Icinga users to benefit from the library of plugins available to Nagios. The service is a network, server, and application monitoring tool. The tool is able to communicate over the internet to include remote sites and cloud resources into the monitored system. All communications over the internet are protected by Transport Layer Security.

The software for Icinga installs on Debian, Ubuntu, Raspbian, RHEL, CentOS, open SUSE, and SLES. It is free to use, as it is an open-source project.

The network monitoring system of Icinga is based on SNMP, which includes the trap mechanism of alerting. Alerts appear in the dashboard and can also be sent to users as emails and SMS messages. The dashboard of Icinga is a very attractive web interface, which users access through a browser. The interface system has to be hosted by the using company – it isn’t a cloud service.