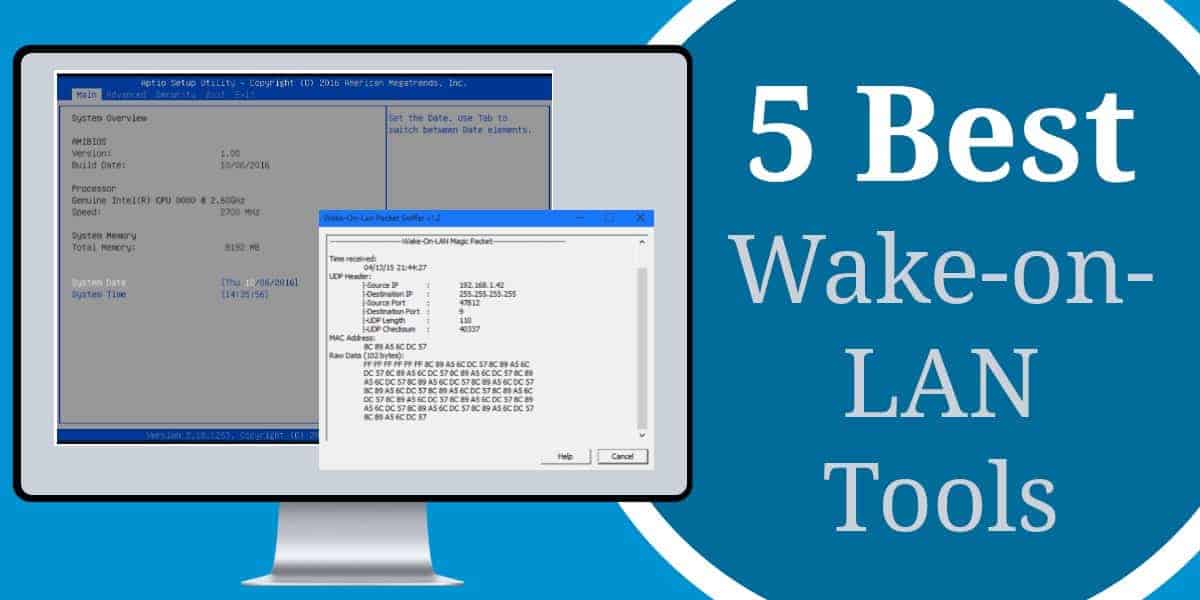 What is a Wake-on-LAN tool?

Wake-on-LAN (abbreviated as WoL) is an industry-standard network protocol that is used to remotely bring a computer out of low-power modes – that is, Sleep or Hibernate modes.

A Wake-On-LAN tool, therefore, is a network administration tool that is used to wake machines on a local area network (LAN) by sending the WoL protocol or “magic packet” to select machines that have the Wake-On-LAN feature enabled in their BIOS configurations. Of course, as we are just about to see, the Network Interface Card (NIC) should also support the feature and have it enabled.

Meanwhile, the magic packet is a simple, light broadcast frame that holds in its payload of 102B: 6 bytes of all-255 subnet mask (FF FF FF FF FF FF in hexadecimal) and the target computer’s 48-bit MAC address repeated sixteen times. 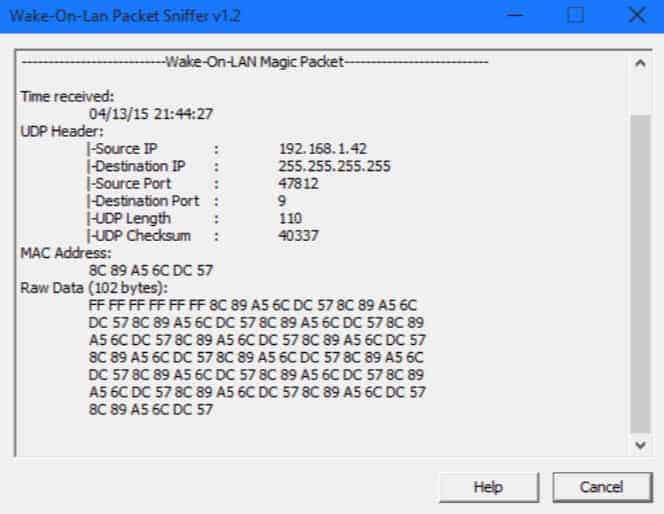 If you just want a quick overview, here is our summary list of the 5 best Wake-on-LAN tools:

Setting up Wake-on-LAN on a PC

Let’s take a look at how you can enable WoL on a PC computer and make it available for remote booting: 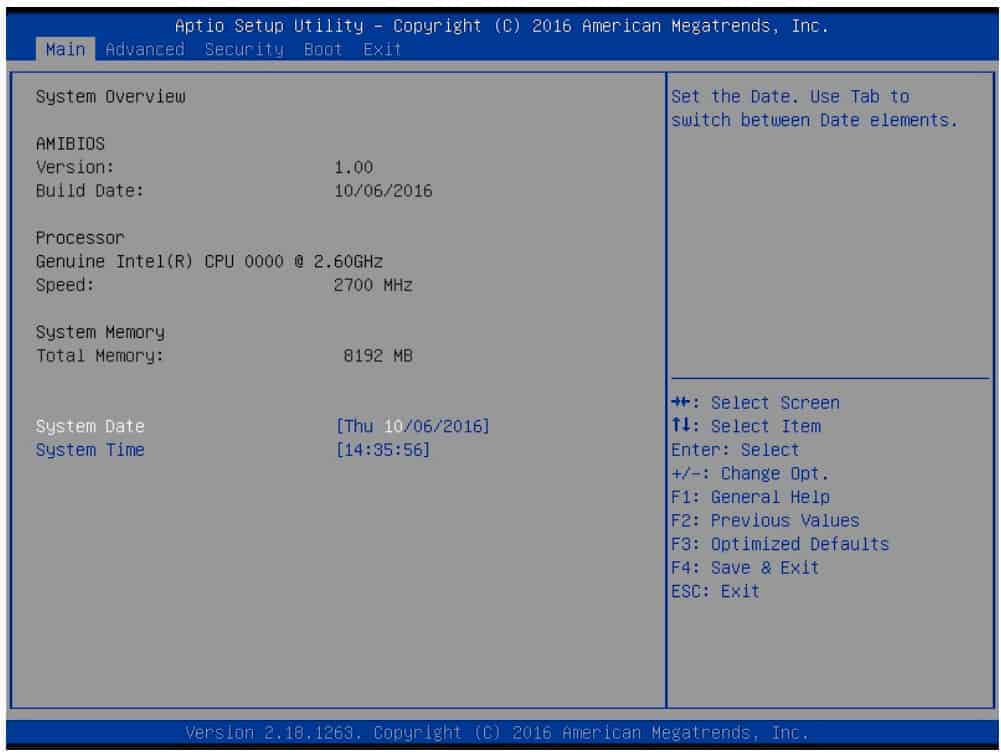 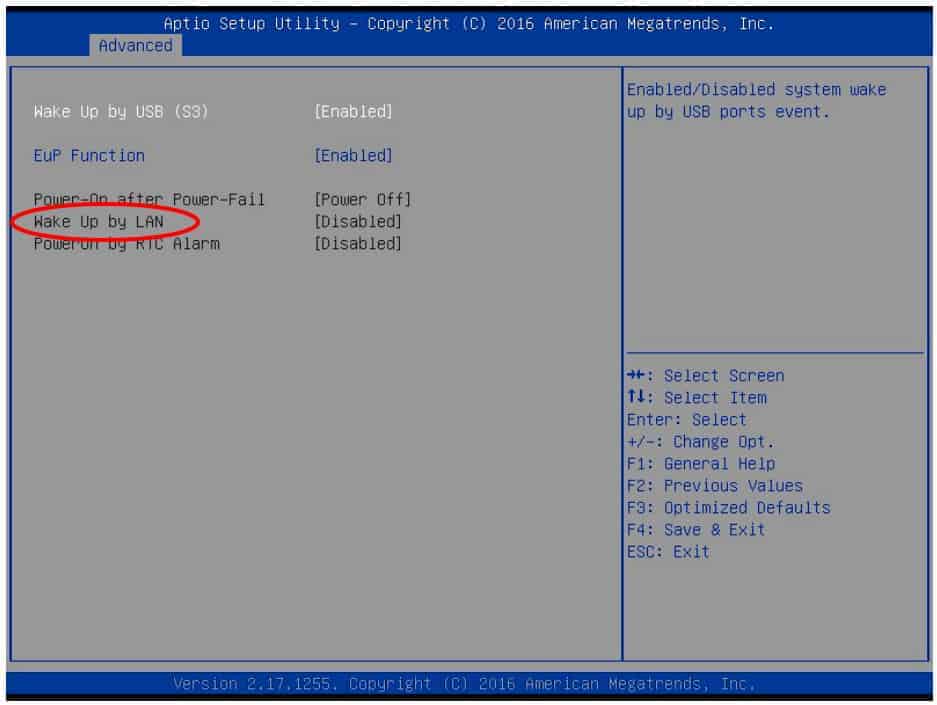 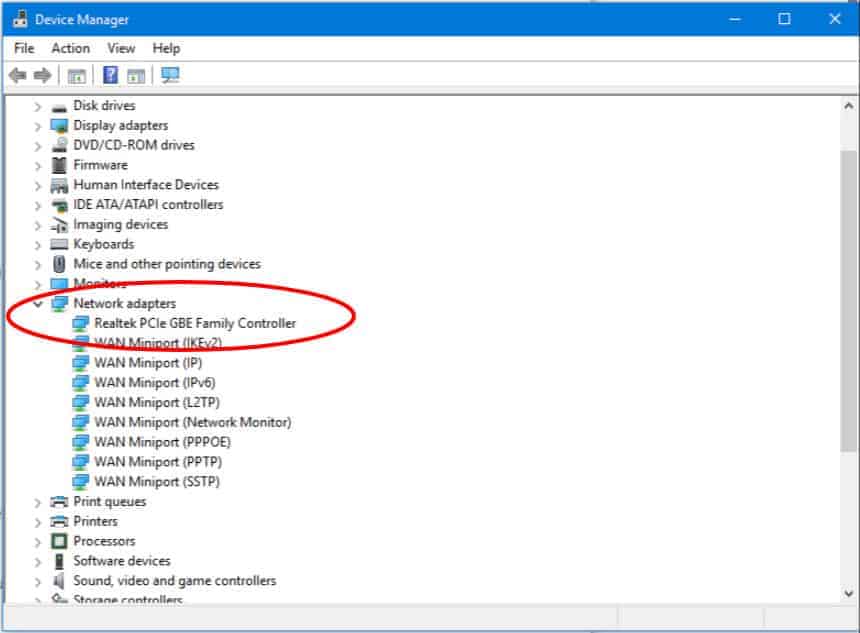 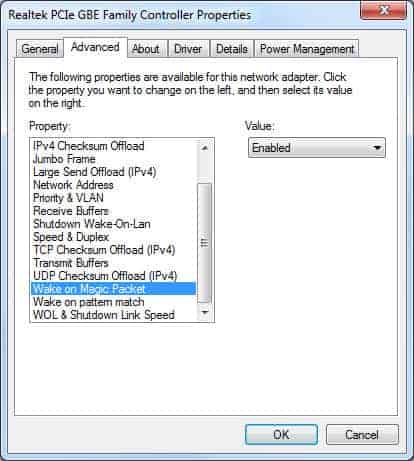 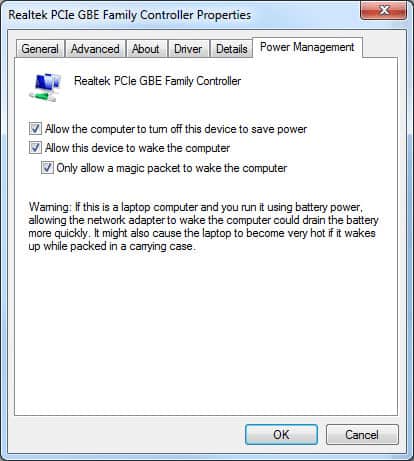 And that’s it; your PC is now ready to accept WoL packets and power on or off depending on the instructions. Don’t forget, the settings on MAC or Linux machines are a bit different from what we have seen here. And also, remember to enable broadcast packet handling on your routers.

NOTE: You can install a third-party WoL packet sniffer on your computers to keep track of WoL packets.

Why would you need Wake-on-LAN tools?

Here are two scenarios that would require the services of a WoL tool:

All it takes in both instances is to wake the computers up with a few clicks on a good WoL tool.

So, what are the best Wake-on-LAN tools?

Below, we have the 5 tools we have found to be the best-in-class WoL tools that are effective, easy-to-use, and have a light footprint. 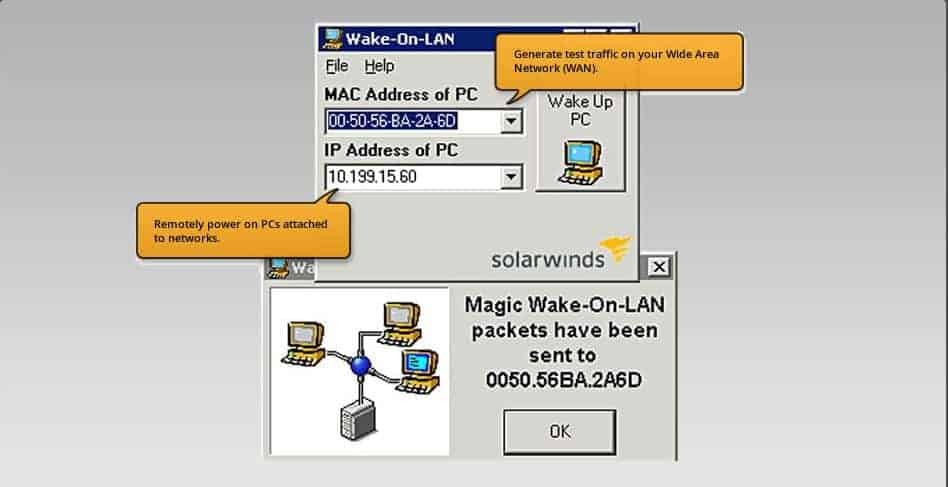 SolarWinds Wake-on-LAN is one of the most popular WoL tools out there and is constantly given great reviews by satisfied network administrators. Perhaps what makes it appealing to most of its fans is the fact that it delivers on what it is supposed to do – remotely power on a networked PC; no muss, no fuss.

But, one thing is for sure, the tool takes its job seriously: it sends out multiple WoL packets – at intervals – to make sure they reach their destination. This can be appreciated on larger networks or those with high traffic where the administrator can even create batch files that automate the job.

SolarWinds Wake-On-LAN is a pleasant tool to use with an easy-to-navigate interface that can be used to control the computers that are on the same LAN as the administrator’s computer. It can work as well as remote ones that can be accessed remotely – even over the Internet.

This WoL tool can be downloaded as a standalone tool or can be acquired as part of SolarWinds’ powerful premium suite of tools: the Engineer’s Toolset and is available on a 14-day free trial for download and evaluation. 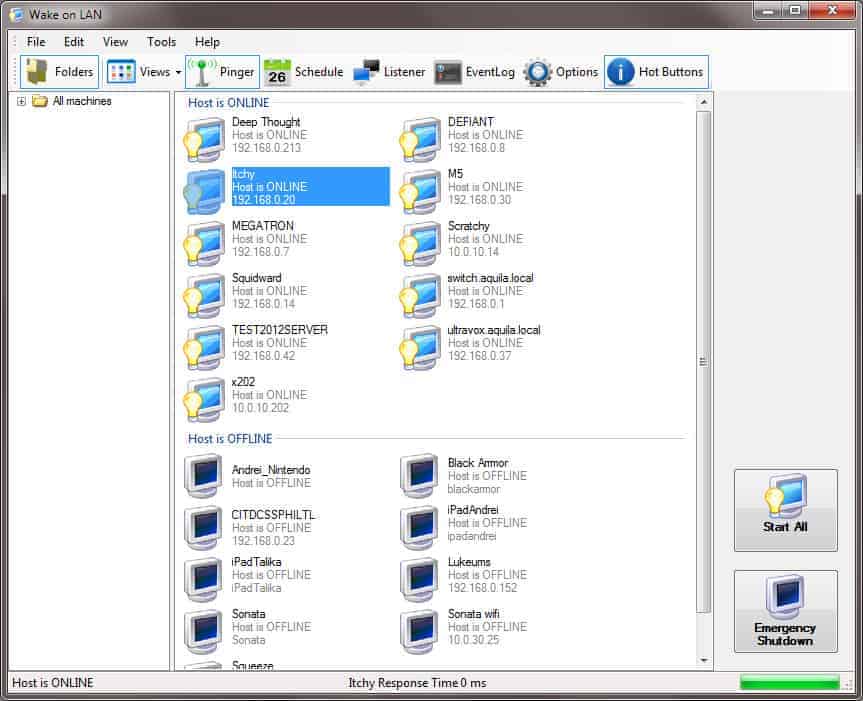 From Aquila Technology we get a WoL tool that is rich with features that can really help administrators by, for example, pinging computers and performing remote desktop access, and emergency shutdowns.

With the help of its simple GUI, administrators can also send out WoL packets to MAC addresses via broadcast IP or to a fully qualified domain name. The reply received can then help discover and add computers to the tool’s directory, and it can also listen for WoL packages – meaning there is no need for additional software to keep track of the packages.

The configuration can be exported and stored offline for future use, while Aquila’s event logs can help with troubleshooting issues.

Aquila’s WoL allows both CLI (Command Line Interface) and GUI interfaces and can be used on both DHCP and static IP address networks, and can even be used to shutdown Linux machines. 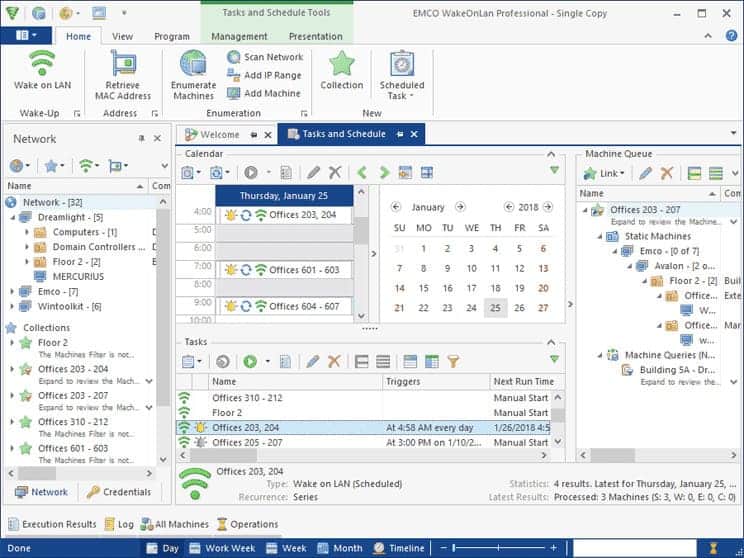 Although EMCO offers free and premium versions of their WoL tool, the former one won’t disappoint administrators. As a matter of fact, this tool was purposely designed to be a heavy-duty tool aimed at larger or corporate networks with heavy traffic flow through.

A unique selling point for the EMCO WoL is that network administrators can wake up multiple remote computers at once and on a schedule; this saves time.

You can use the network scanning tool to detect computers in domains and workgroups. Once found, it can find their MAC addresses using one of four methods – Neighbor Discovery (ND), NetBIOS, WinAPI or WMI.

Another exceptional feature this tool brings to the table is its ability to monitor networks in real-time and its well-describing email alerts. And that’s not even considering its web-based reporting API and security event correlations.

With NirSoft’s WoL, administrators have the power to choose what section – or subnet – of a network they want to scan and then work with. This is because the tool allows for ranges of IP addresses to be set before scanning begins.

Once done, the result of the scanned network can then be saved in a list that holds relevant information like MAC and IP addresses. It is with the help of this list that the tool sends out WoL packets the next time its services are required – all it takes to wake computers up is a click of a button. Of course, there’s also the option of running it from a CLI.

NirSoft makes sure it regularly updates its tool which is available for Windows 8 and Windows 10 and is also absolutely free. 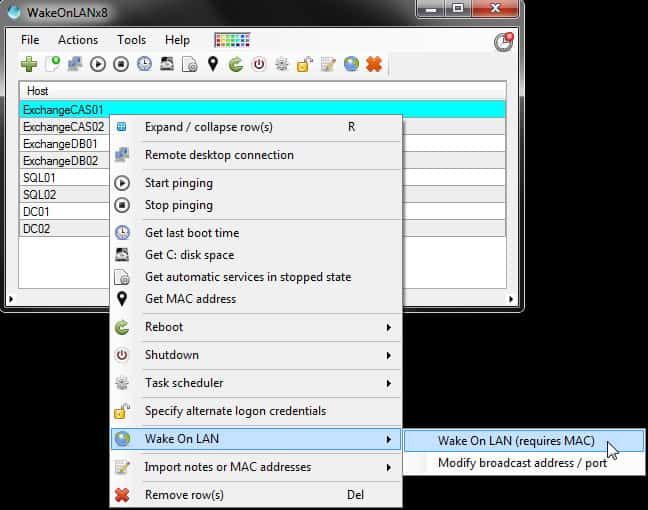 Wake On LAN X is a tool designed with administrators in mind and is quite a robust suite of features that let you perform tasks like turning PCs on or off, and even reboot them in batches if need be.

This is a WoL tool that can be run using GUI and CLI modes which can easily be configured for better performance and in-depth results.

A unique feature that comes with courtesy of this tool is that it can tell administrators the last time a computer was booted. If that doesn’t impress you, how about the fact that it can tell how much disk space is available on a computer and also what system services on it have been set to “Automatic” or are simply idle.

Still not impressed? Well, how about the fact that it can be used for remote access? All this, for free, and you get the picture of why it is on this list.

Although we promised to give you five of the best Wake-On-LAN tools, we have a couple more “goodies” for you:

For those of us who prefer to do things by solely using command-line interfaces we have:

Wake-on-LAN from your smartphone

Apart from using a computer or laptop to send out WoL packets, administrators can also use their phones to control the machines on their network. The following video will demonstrate how that is possible while also showing how to configure a computer to work with WoL packets.

Before we leave you with our choice of the best Wake On LAN tools, let’s go over some important points to consider before you start using them:

Once these points have been taken into consideration, it is just a matter of choosing any one of the best Wake on LAN tools listed above and implementing it.