MRTG is the Multi Router Traffic Grapher. Although this tool is free, many people find the interface a little clunky. We show you alternatives for MRTG that have a better presentation.
Stephen Cooper 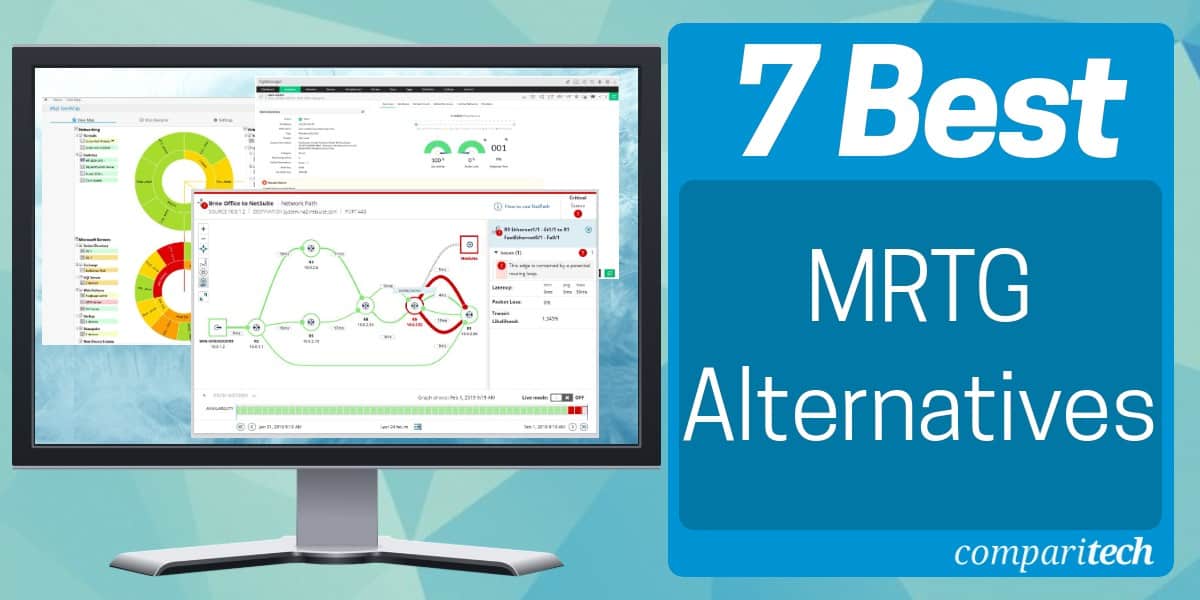 MRTG is a free network monitoring tool produced by Tobi Oetiker. This software requires Perl to be pre-installed and it runs on Windows, Unix, Linux, and macOS. Although the tool is very useful, it was first created in 1994 and its interface is a little dated.

Here is our list of the seven best MRTG alternatives:

MRTG is a network monitor. It also gives information on network device statuses, such as toner level for printers or processing capacity for switches. MRTG shows a graph of network traffic over time.

The MRTG data gathering system stores each network performance snapshot in log files to enable it to assemble its graphs. The data retention period for these logs is two years. However, data gets compressed and summarized over time, with more detail available for newer records than for past periods. The user can ask for a data transfer rate graph for seven days, five weeks, a year, or two years.

The graphs that MRTG produces are embedded into a web page format and they can be viewed with any standard web browser. These views are not updated live but are generated on-demand or on a schedule.

The data for the graphs that MRTG creates come from reports sent to the software over the network with the Simple Network Management Protocol (SNMP) procedures. All network devices are shipped with SNMP capabilities. Each device has a program running on it, which is called the SNMP Agent.

The SNMP system requires the existence of an SNMP Manager. MRTG provides this function. The manager broadcasts a request for reports and when each agent receives this request, it sends back a response with a table full of data on all of the statuses of the device that it runs on.

The SNMP specification lays down the format for this response, with a code for each data field. MRTG dereferences these codes, extracting the related values that it needs for its graph, and then stores an aggregated record of network activity at that moment. Each request/response cycle provides another data point on the graph.

In this guide, we look at monitoring tools that offer network traffic graphs the same as MRTG, but also show live data and include alerts.

To compile this list, we focused on network monitoring tools that use SNMP and generate great graphs. Unlike MRTG, these tools give constantly updated live data throughput graphs.

Although most of the tools in this list are not free like MRTG, they are well worth the money and you can compare the paid tools to free options by taking out the free trial that they offer. 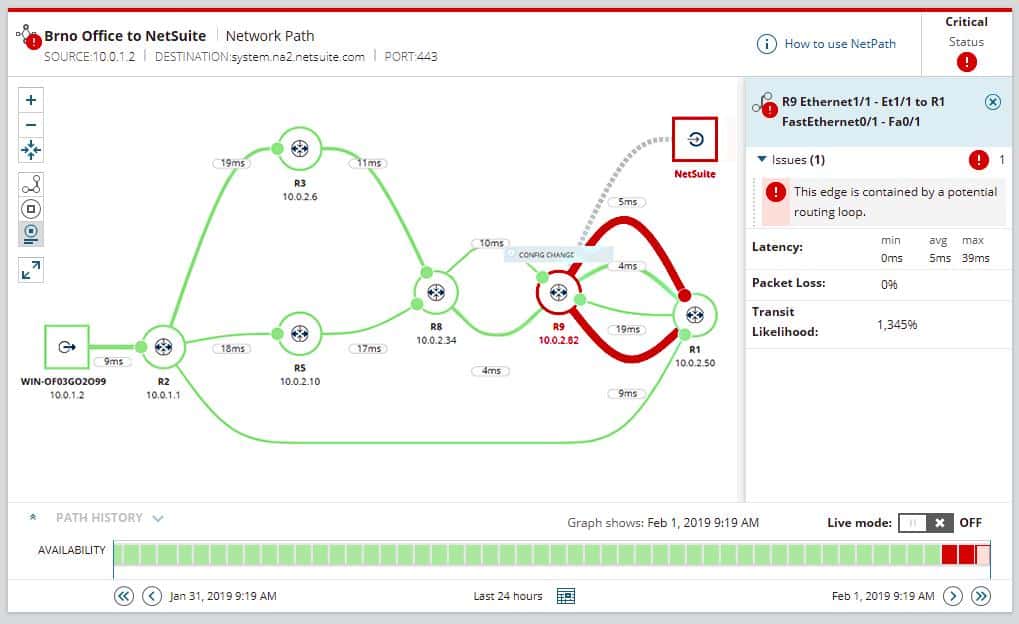 SolarWinds is the leading IT infrastructure monitoring system provider and its core product is the Network Performance Monitor. This system is based around SNMP. The benefits of this tool include an autodiscovery function that detects all devices connected to the network and logs them, including attributes such as make and model, addresses, and capacity. The inventory is updated constantly and it provides the source for an automatically drawn network topology map.

The dashboard for the service shows the overall health of each device with color-coded statuses for instant issue recognition. Other features include an alerting mechanism that enables IT staff to leave the monitor to watch over the network, knowing that they will be informed of developing problems as soon as they arise. 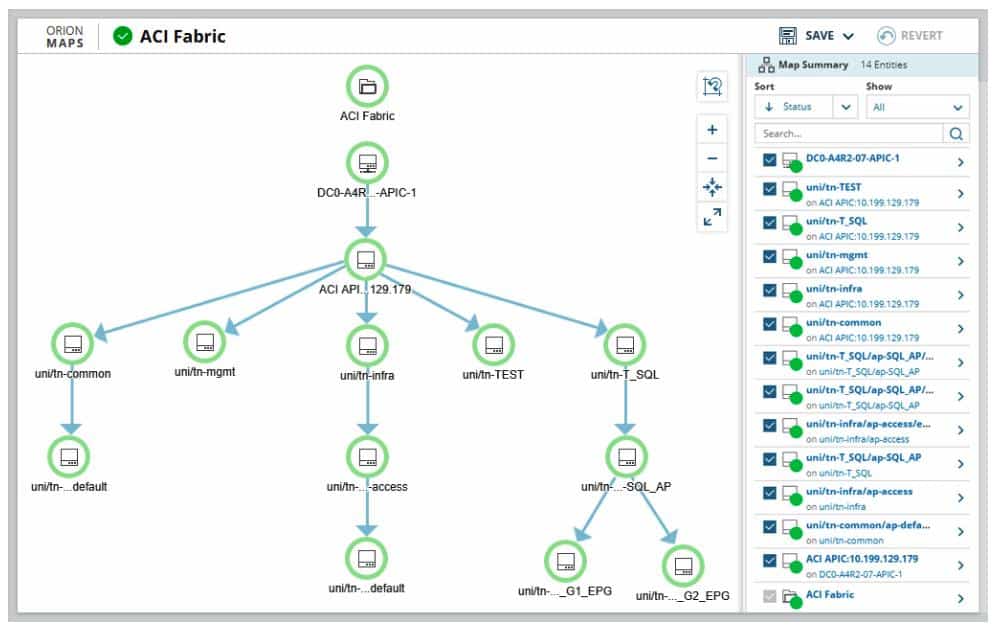 SolarWinds Network Performance Monitor installs on Windows Server and it is part of a suite of monitoring and management tools that are written on a common platform, called Orion. Although combining this tool with other modules brings greater capabilities, it can also be used as a standalone system. SolarWinds offers a 30-day free trial.

SolarWinds Network Performance Monitor is our top pick as an alternative to MRTG because it gives IT departments full control over all network devices with automated SNMP checks. The tool is a lot more comprehensive than MRTG because it displays statuses live and doesn’t just generate system graphs on demand. The tool also includes analytical functions based on historical data. 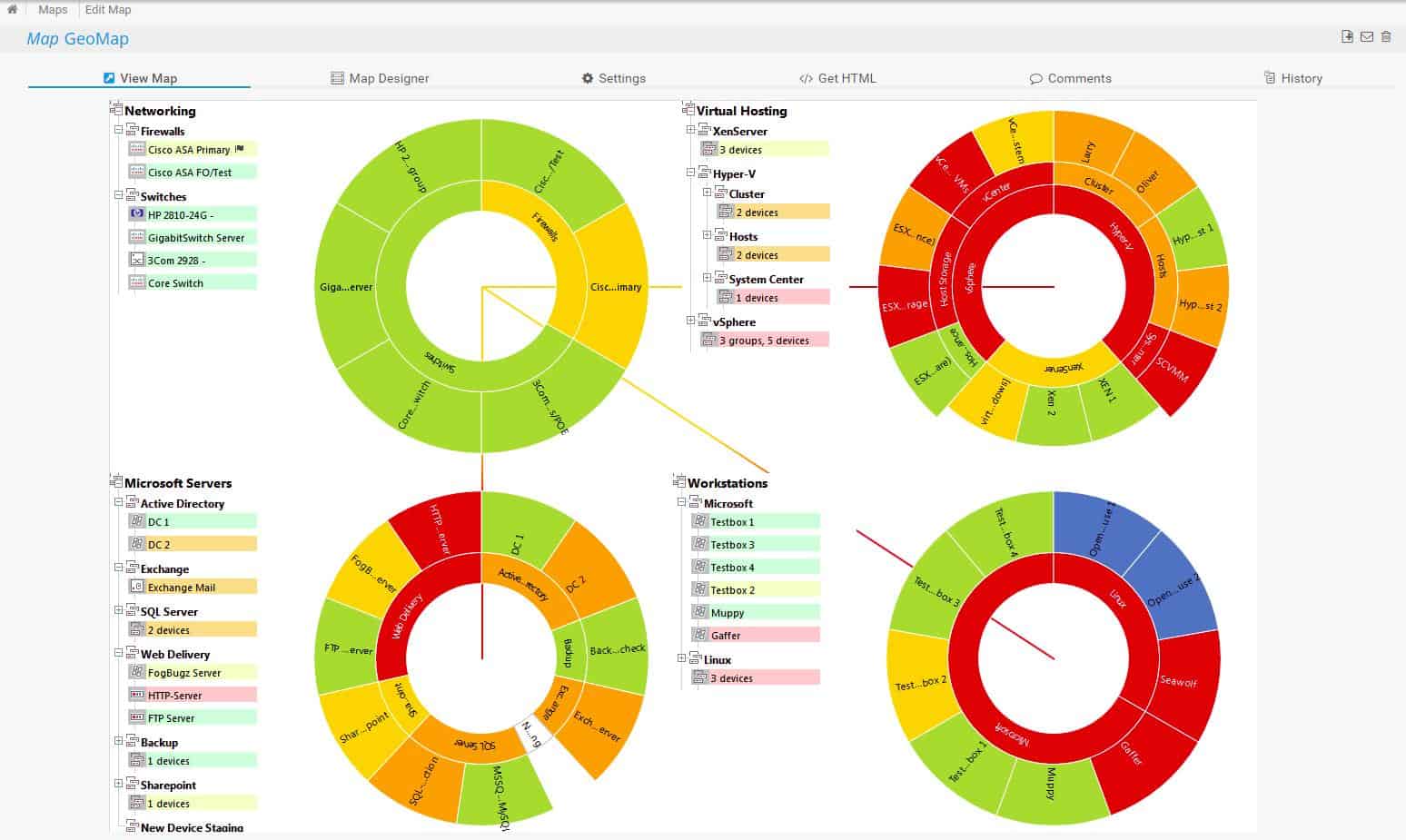 Paessler is named after its founder, Dirk Paessler, a systems programmer who started developing his own commercial tools. PRTG was developed after Paessler got frustrated by the complexities of installing MRTG. He created PRTG with a similar name but with completely different operating procedures to provide something better.

An SNMP-based data grapher that is still at the core of PRTG was the original service that he created to compete with MRTG.

PRTG is a collection of monitors that cover networks, servers, and applications. The buyer decides which monitors to turn on. The monitors are called sensors and the price of the package goes on the number of sensors that the buyer wants to use. The service is forever free for up to 100 sensors. The software installs on Windows Server and there is a 30-day free trial of PRTG with all sensors activated. 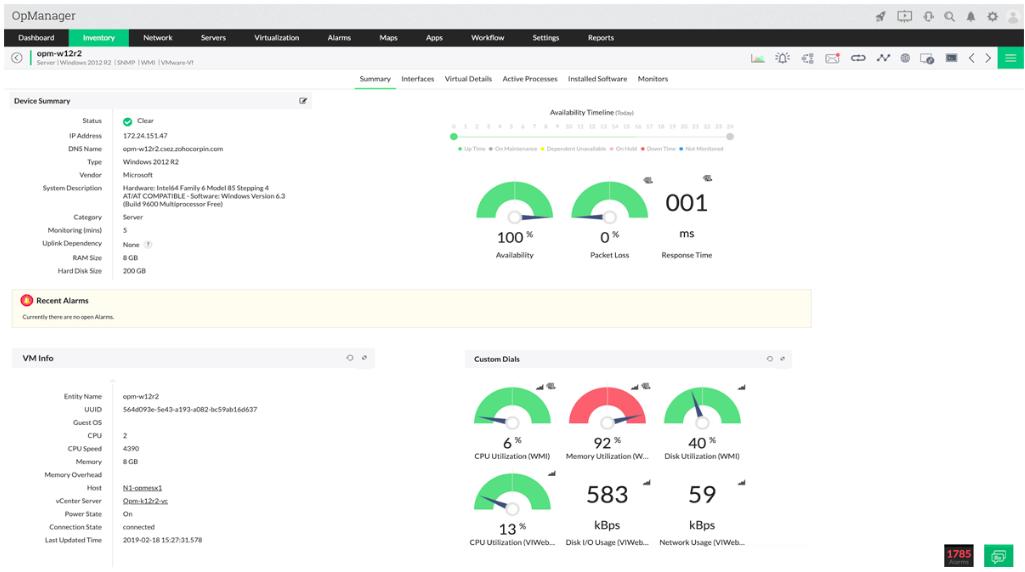 ManageEngine is a close competitor of SolarWinds and Paessler and the three companies always fill the top three in everyone’s estimation of the best network monitoring tools. OpManager is the ManageEngine SNMP-based network device monitor. The service includes an autodiscovery function that also produces live maps of the network. The user can select from a range of map layouts and details, which are all available with live data. Problems are highlighted with alerts.

OpManager has an attractive dashboard, which includes a summary of the entire network. Each record provides a link through to a details screen and all screens include color-coded graphs and charts. 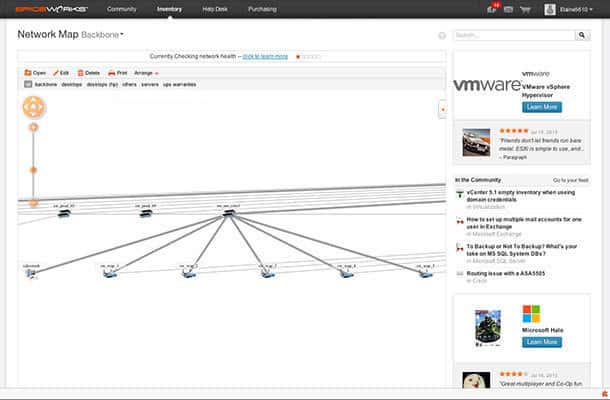 Spiceworks Inventory is an asset management system that uses SNMP to track network device statuses. The income strategy of Spiceworks is fairly unique – it displays ads in the user dashboard to fund the product. So, it is free to use, but some people might get annoyed by the ad panel. The ads aren’t general – they all relate to networking utilities.

Like other SNMP-based network monitoring tools, Spiceworks Inventory generates alerts from SNMP trap messages. The screens are very busy and crowd in a lot of information to provide a single view of all live statistics. Features include autodiscovery and automatic network mapping plus performance graphs. The software for this tool installs on Windows and Windows Server. Spiceworks has a large user community that shares tips and support advice through a community forum. Professional support is also available for a fee. 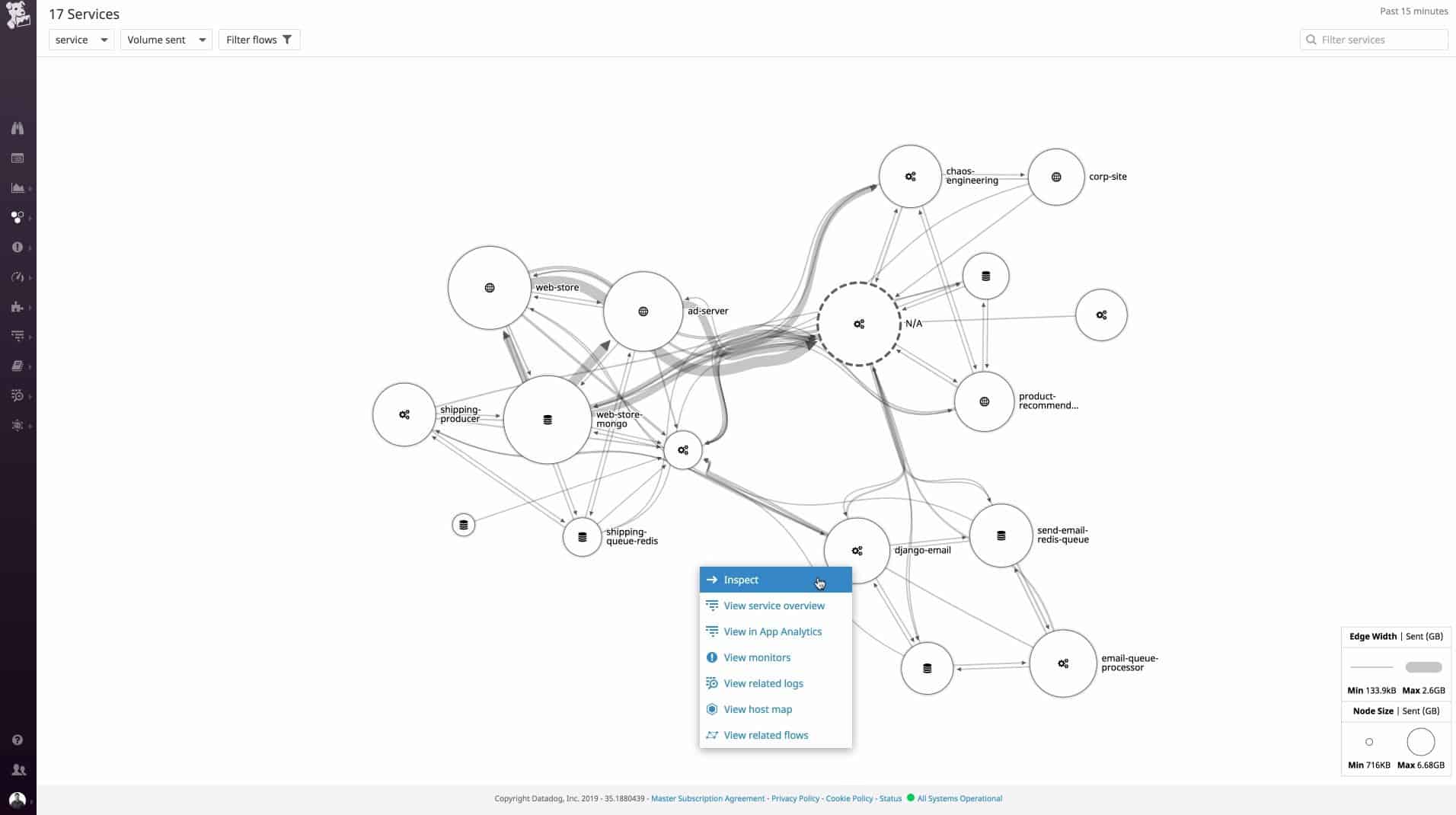 Datadog is a cloud-based infrastructure monitoring platform. Among the modules of this service is Datadog infrastructure. This tool uses SNMP to monitor network device health.

The services of Datadog infrastructure include a device discovery system that logs all equipment and creates an inventory. That database is constantly updated and drives the entire monitoring service. Graphical features in the dashboard include network topology maps and representations of live data.

Datadog uses SNMP traps as a source for alerts. This strategy enables IT department technicians, to leave Datadog to perform regular network monitoring, accessing the system when things go wrong or for capacity planning analysis.

As Datadog Infrastructure is resident in the cloud, users don’t need to worry about finding server space for it or updating the software. The system includes all supporting infrastructure and there are no setup costs. Datadog is charged for by subscription with a fee per host per month. There is a Free edition with limited capabilities and buyers can experience the full version of Datadog on a 15-day free trial. 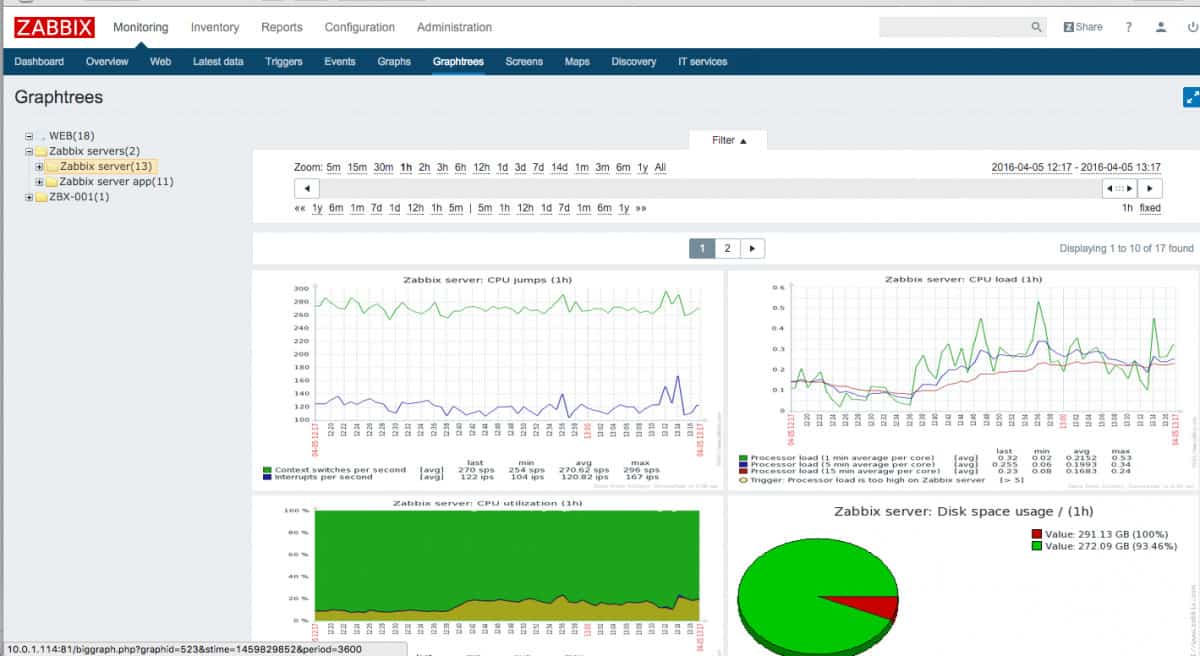 Zabbix is a free infrastructure monitoring system. The dashboard for the tool is very attractive, featuring a dark background and brightly-colored graphs. The Zabbix interface is much more graphical than all the other tools on this list, providing a graph or a chart for just about every tracked metric rather than lists of records.

Network monitoring is based on SNMP and the service includes alerts based on SNMP traps. Thanks to SNMP, Zabbix is also able to provide a device discovery service and the interface is able to create a network topology map, which can be presented in a range of formats.

Zabbix installs on Linux, Unix, or macOS. The system is able to monitor Windows devices, but they will need an agent installed on them. The dashboard module and the main processing engine of the service won’t install on Windows but it could be run on a VM over the Windows operating system.

Atera is a cloud-based service that caters to Managed Service Providers (MSPs). The tool bundles together all of the software that an MSP would need and provides it with all supporting resources. So, it could be used by a business that operates a virtual office, with remote, independent support technicians logging into the service from their own bases.

Among the many utilities of the Atera system, network device monitoring uses SNMP to provide constant health checks and create a network inventory. The service also provides alerts based on SNMP traps. One missing element of this service is that it doesn’t include a network topology mapper.

The Atera system integrates a help ticketing system and it is charged for by subscription per technician per month. This is a great bundle for someone who wants to start out as an independent support technician because one technician license gets all of the utilities that the big corporations pay a lot of money for. Users can expand easily by just adding on another technician subscription. Atera is available for a 30-day free trial.

MRTG is free, which is wonderful but sometimes it is better to pay for an improved service than put up with a less comprehensive option. There are many network performance monitors available that rely on SNMP and most of them show live data graphs, which are constantly updated.

Although stored data over time is good for performance analysis and capacity planning, systems that offer live data deliver immediate information on network performance while also creating the option to store metrics for analysis.

SNMP contains an emergency notification message format, which is sent by a device agent without waiting for a request. This is called a trap and live network monitors interpret these into alerts. A live network performance monitor with alerts enables the IT department’s technicians to leave the monitor to look after the network. As long as an alarm doesn’t appear, everything can be assumed to be working well.