Avast vs Bitdefender: Which is best?

This comparison will look in detail at the pros and cons of two leading antivirus software, Avast and Bitdefender. Which will be better suited to you?
Steve Adams 15+ years experience in the tech, privacy and security space 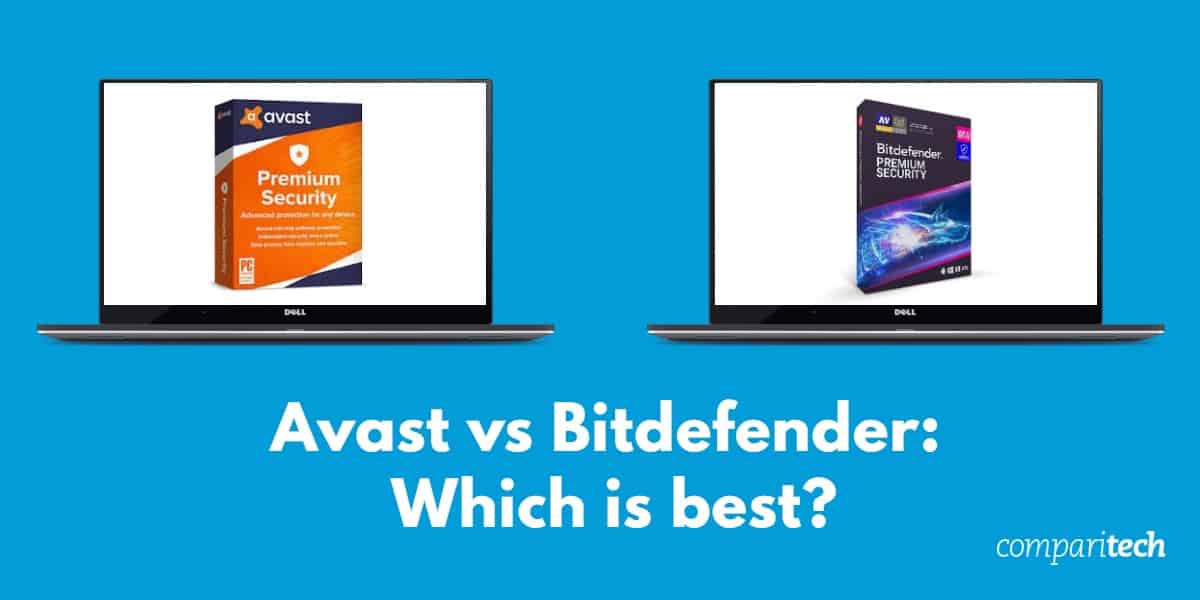 Avast and Bitdefender are amongst the most popular antivirus products on the market today, and Avast in particular is a well known brand name to most consumers with even a passing interest in online security.

Avast does come with some controversial aspects due to news stories that it sold the web browsing data of its users. Despite this, Avast continues to protect millions of consumers and businesses all around the world.

I have put together a comparison on Avast’s and Bitdefender’s antivirus protection, performance impact, and additional features. I will take a look at their interface, sign up process, and the cost for both products. Whether you’re new to the world of antivirus programs or an expert, this will give you the information you need to understand which one is best for you.

If you don’t have time to read the full comparison in detail, here is the short version:

Who wins between Bitdefender and Avast?

Bitdefender is my winner thanks to excellent malware detection and additional features that consumers will find helpful. Whether that’s making sure your online banking is safe or parental controls for children who use your device, Bitdefender offers the ultimate protection when online.

Here’s what I found when comparing Avast to Bitdefender:

Avast employs over 1700 people and originates from the Czech Republic. Avast currently has 425 million active users, making it one of the most popular and well-known antivirus programs on the market today. However, Avast has come under fire recently after a news story highlighted that Avast collected and sold user data.

Bitdefender is a Romanian cybersecurity company and was founded in 2001. It protects half a billion users worldwide and it also works with government organizations, SMEs and private individuals across 150 countries. Bitdefender employs over 1600 people and is one of the most innovative IT security software vendors in the world today.

The price of a product is the ultimate compelling factor when thinking about what to purchase and antivirus software is no different. Antivirus software is an investment, particularly for the more high-end packages on offer, so choosing the right one is important.

Where Avast and Bitdefender differ is, Avast offers a free antivirus package that will protect you from the most common threats, but keep in mind that this is a very basic package. The top-end package is Avast Premium Security, which protects up to ten devices and comes in at $75.99 for a year’s subscription.

Bitdefender Premium Security comes in at a higher price at $159.99 per year, but there are cheaper levels of protection to suit your budget.

Both companies offer a thirty-day money-back guarantee if you are not fully satisfied, which gives you the option to essentially try before you buy. Avast and Bitdefender work with all the major operating systems which include Windows, MacOS and Android devices.

Whether you use your device for work or leisure, having sufficient protection is important, especially when threats are becoming more and more sophisticated. Not all antivirus programs are equal at protecting you online, which is why I have run my own tests and looked at some independent tests from leading websites.

For my own test, I first ran a test to check for malware threats by using live samples. I downloaded sample malware files from The European Institute for Computer Antivirus Research (EICAR). To decide how well the malware was detected, I turned off real-time detection and ran a full system scan and also a quick scan. The results are in the table below.

As you can see from the table above, the results are different for each provider. Bitdefender successfully blocked all EICAR samples and live samples. 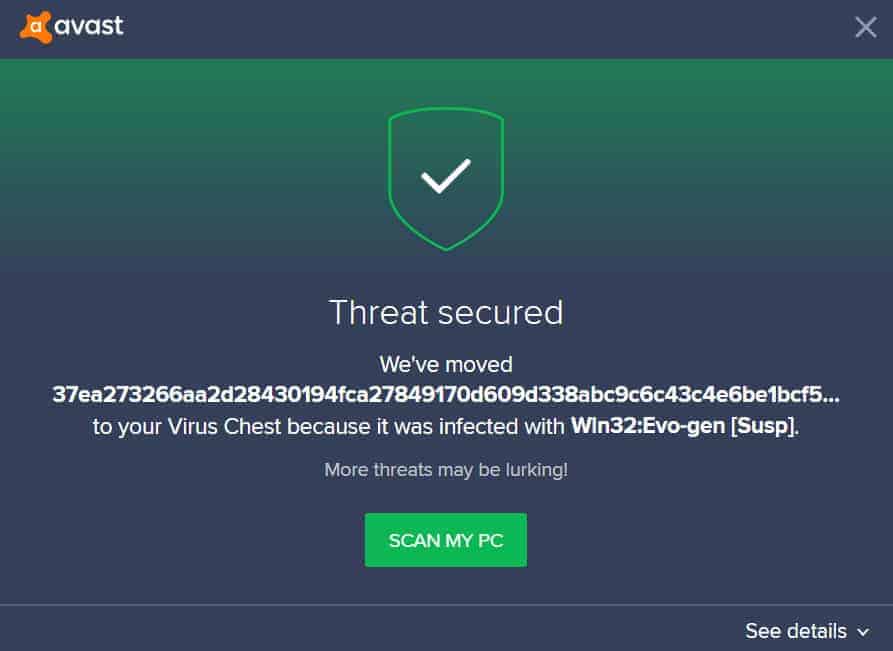 In comparison, Avast allowed the EICAR samples when downloaded over HTTPS, but blocked them on HTTP. For the live samples, Avast blocked all three. 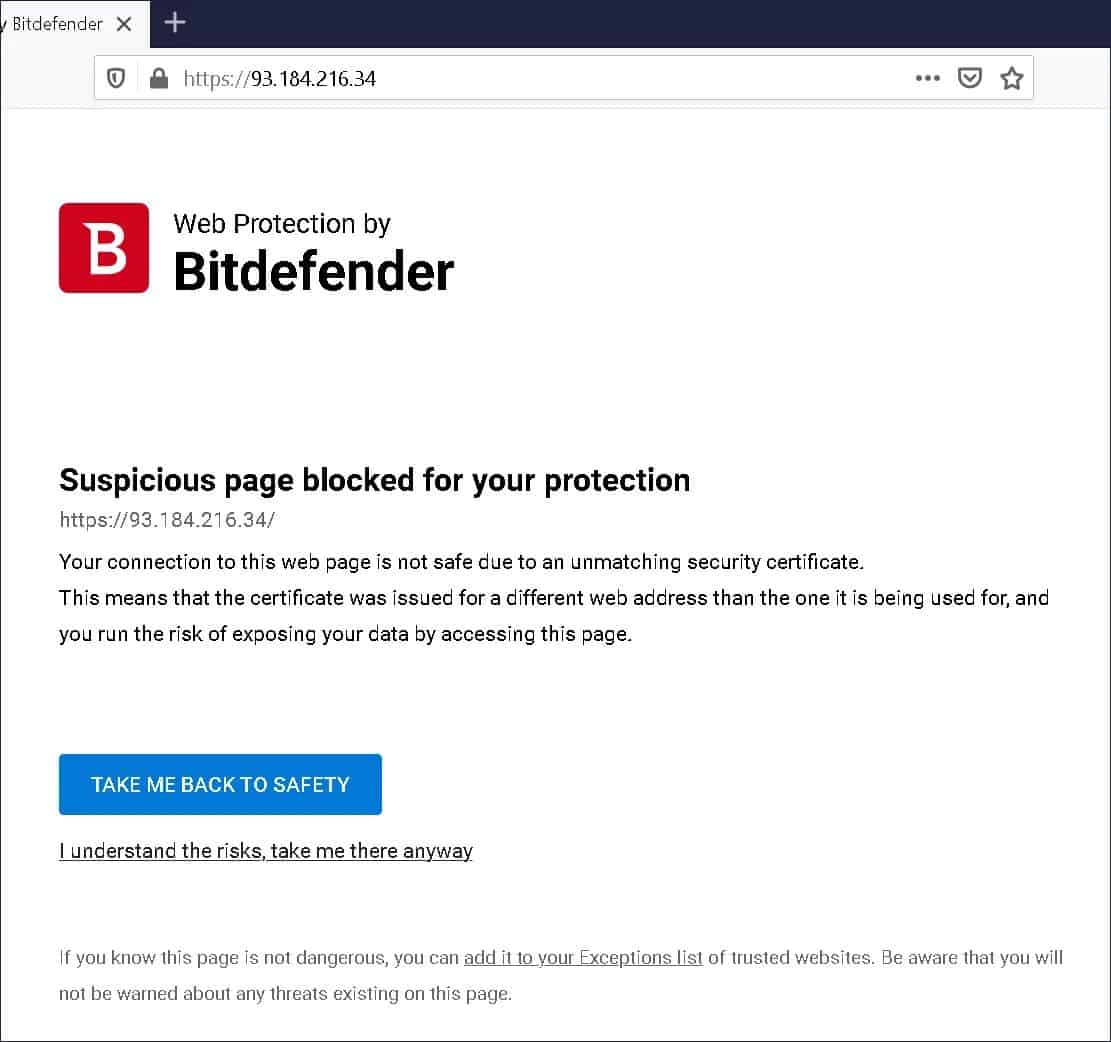 From my tests, Bitdefender performed better by blocking EICAR and live samples. To see if my results were accurate, I looked at some latest test results from AV-Test and AV-Comparatives website.

The first test from AV-Test looks at protection rates against malware attacks, inclusive of web and email threats. During both March and April 2020, Bitdefender scored 100%. Avast received a 98.2% score in March, and in April it was a little higher at 99%. The lower score from Avast reflects my own results in the table above.

Next, I looked at AV-Comparatives latest Malware Protection test. Bitdefender scored 99.5% and Avast 99.98%.

To sum up, Bitdefender performed more favorably, blocking all of the EICAR and live samples and recording fewer false alarms than Avast. Although both have quite similar results in the AV-Test data, Bitdefender seems superior in protection against malware threats.

Antivirus programs can have a huge impact on your PC performance, and if you are using your PC regularly for work, gaming, or browsing online, you do not want anything slowing it down. I looked at the performance of my PC when running both a full and quick scan in the background. The table below highlights the results.

The below table sums up the impact the scans had on my PC performance and the amount of resources that were used.

The table also shows Avast and Bitdefender had similar results when there was no scan taking place. However, when a full scan was in progress, Avast had a significantly higher impact on disk utilization.

To verify my findings and to see if independent tests had similar results, I took a look at the AV-Comparative website. The test run by AV-Comparative shows how each antivirus impacts on PC performance during eight common tasks:

As people spend an increasing amount of time online, it’s important to have protection for any day to day tasks, whether that’s online banking or managing your passwords. Here is a breakdown of the features that come with Avast and Bitdefender.

Below I have picked three of my top features from each antivirus program.

Automatically update apps – If you have many applications on your device, it’s important to make sure they are not out of date, as this can lead to hackers getting into your device. This tool automatically updates and searches for the latest releases online for all your apps.
Safer shopping – If you bank online or often do online shopping, this is a great tool to stop hackers from hijacking your router’s DNS to send you to fake sites. It also lessens the chances of hackers gaining your passwords.
Sandbox  – Opening a file that may seem suspicious is dangerous, but if you insist on downloading it, the sandboxing tool lets you open files in a safe environment before you let them run on your PC.

Anti-Theft – Bitdefender packs effective anti-loss and anti-theft tools for your Windows laptop or tablet, remotely accessible from anywhere in the world via your Bitdefender account

Bitdefender’s VPN and anti-theft tools are great additional security features that will bolster your online defenses. For this reason, I think the extra features that come with Bitdefender offer the best value for most users.

The sign up and installation process should be hassle-free and quick. Avast’s checkout was easy and after entering a few personal details and payment, I received a download link. It took only a few minutes to install. Avast states that you will be billed annually if you do not cancel. 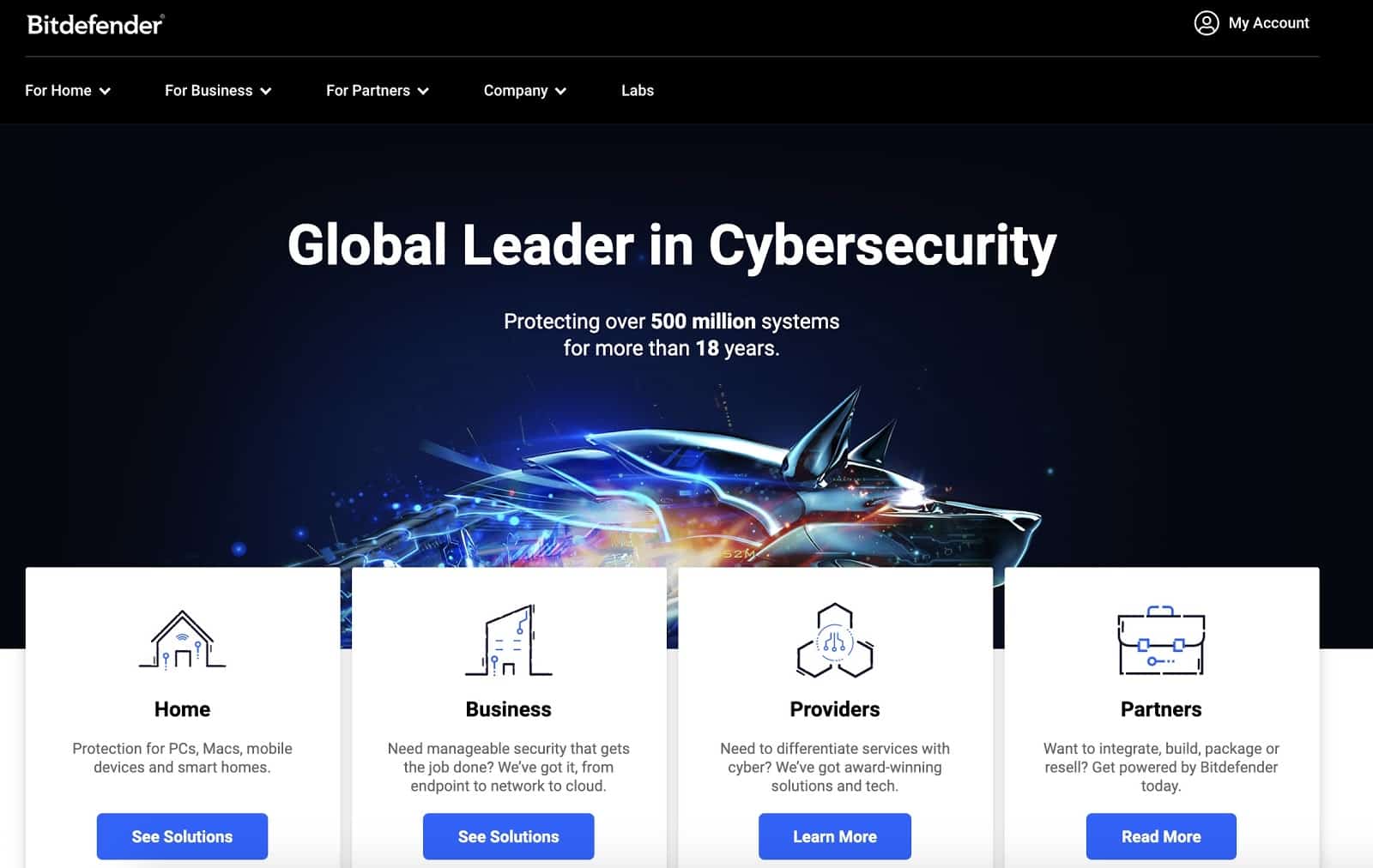 Likewise, Bitdefender is also incredibly easy to sign up and takes just a few minutes to install. The automatic renewal is toggled on by default, so I suggest turning this off if you do not wish to renew the following year.

Many of the features antivirus programs come with can seem complicated, however, the dashboard for both antivirus programs are easy to use. When opening the dashboard for Bitdefender, you will be greeted by a ‘You are safe’ slogan. It also has the usual overview of your device and protection, privacy and utilities section. There is also a section for you to share your suggestions and things you would like to see in any future updates. 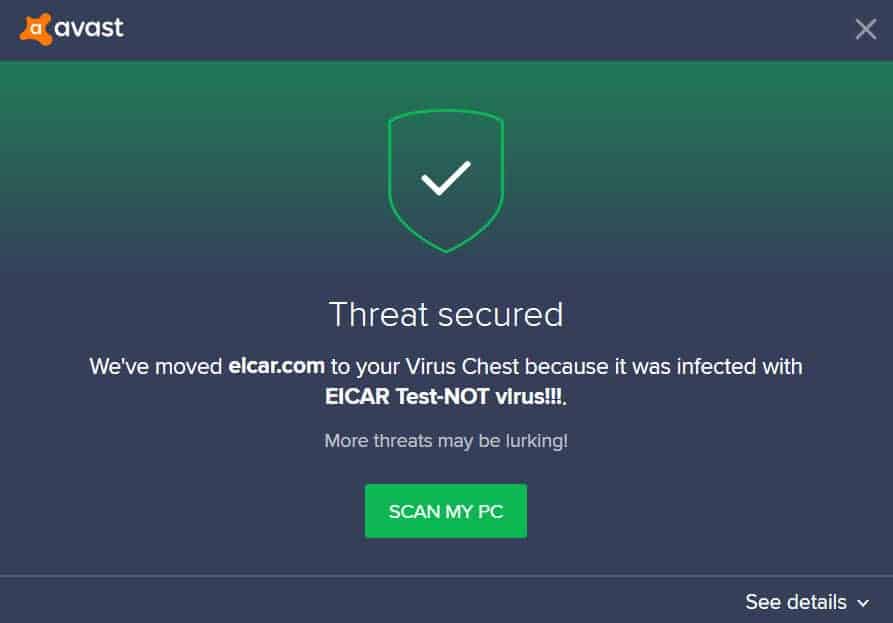 Avast’s interface is also simple, as opening it shows you a green tick telling you your PC is protected. There is also a clear bold box where you can run a smart scan. You get all the common sections such as protection, privacy and performance on the left if you want to see more in detail.

If any problems arise when using your software, it’s important to have decent customer support if you get into trouble. Avast’s customer support features live chat and emails. A technician phone support option is available at an extra cost if you need it. Avast also lets users find solutions via self-service, providing a detailed FAQ on its support website if you do not wish to contact anybody directly.

Bitdefender offers an extensive support hub, with many common problems answered on its website or shown through online videos, which is great if you want an easy fix. If this is not doable, you can contact them via email, calling, online chat or through their expert community. They are available to answer any questions 24/7, giving you that peace of mind if something goes wrong.

To sum up, Bitdefender is the worthy winner. It outperforms Avast in malware protection, both in my own tests and the independent tests online. Although Bitdefender comes in at a higher cost, you get what you pay for in terms of additional features that will protect you online when doing common tasks. With the added privacy features such as anti-theft and a VPN, you can rest assured that you are getting the best protection for your money.