Comodo vs Bitdefender: Which wins?

Bitdefender and Comodo face off in a series of tests to discover which antivirus provides the best protection for consumers. Find out which antivirus came out on top.
Steve Adams 15+ years experience in the tech, privacy and security space 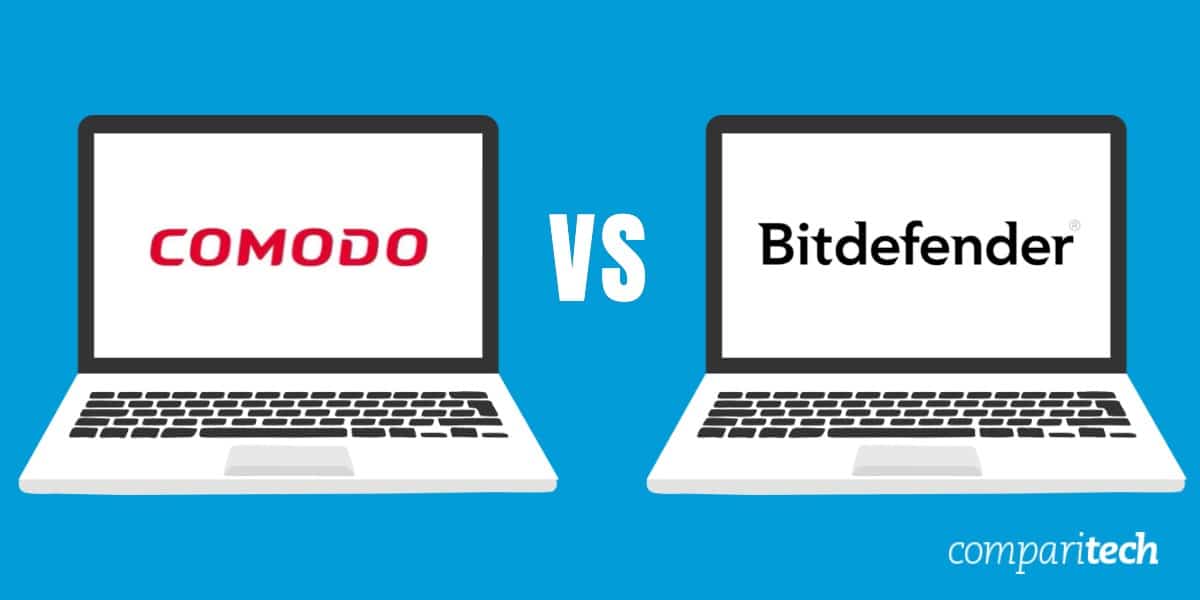 Bitdefender and Comodo are both leaders in the world of antivirus software, but which one is the best? In this comparison, I’ll look at what to think about before buying an antivirus product. This involves assessing the software’s cost, security, performance, features, and general usability.

To provide a fair judgment, I did my own tests to see which product provides the greatest security and reviewed independent data from renowned antivirus testing laboratories.

Do you want the quick version? Bitdefender is my choice. It is a well-known industry leader that provides excellent security for both enterprises and consumers. In contrast to Comodo’s restricted selection, Bitdefender has a variety of packages to choose from. I recommend reading the complete comparison below to see what each program has to offer.

BEST DEAL FOR COMODO: and add two additional devices for only $10 more.

BEST DEAL FOR BITDEFENDER:Save 50% on Bitdefender Total Security and get the best protection on up to five devices.

Melih Abdulhayolu established Comodo in 2004. The corporation began in the United Kingdom before expanding to the United States. It is primarily known for its free antivirus software, but it also provides more powerful protection suites for home and corporate customers for an annual subscription price.

Bitdefender was founded in 2001 in Romania. It continuously develops new strategies to keep customers secure online. The company has over 500 million global users. Many SME and enterprise companies also use its security software.

Bitdefender used to provide a free antivirus. The firm is currently concentrating product development around multi-platform security and is retiring Bitdefender Antivirus Free Edition for Windows. According to the company’s main website, current free users will be supported by Bitdefender until June 30, 2022.

Bitdefender’s software for home users is divided into four levels. Bitdefender Antivirus Plus is the entry-level software.

It costs $59.99 per year and includes coverage for three devices. It provides antivirus protection as well as a phishing defense feature. There is currently a deal available that makes the first year of subscription $19.99.

Bitdefender Internet Security comes next. It costs $79.99 a year and includes coverage for up to three devices. It has a privacy firewall, security against microphone and camera hijacking, and a more powerful virus and malware scanning engine. The first year of subscription currently costs $24.99.

Bitdefender Total Security costs $89.99 per year. It contains everything from the previous tier as well as a OneClick Optimizer for removing unneeded files and speeding up your device. There’s also a password manager, a VPN (with a daily limit of 200MB per device), parental control, and a file shredder.

Bitdefender Premium Security is the last option, and the annual fee for this software package is $149.99. It contains everything in the Total Security plan plus an unrestricted VPN to help you retain your privacy and security while browsing the web. The first-year discount brings the price down to $59.99 for the first year.

Comodo offers a free antivirus software that includes real-time scanning for new threats and an on-demand scan for current concerns. It includes a proactive malware defense scanner, sandboxing software, and a spyware scanner.

It includes all of the features found in the free versions, as well as a firewall, secure shopping, and a web filtering feature. Comodo also offers versions of its software to protect Mac and Linux operating systems.

When selecting antivirus software, the most important element to consider is the effectiveness of its malware protection. Malware is always evolving, resulting in more complex attacks over time. To tackle these threats, you must have the strongest virus protection. I ran several tests to see which brand was the most effective at dealing with these challenges.

I wanted to check how Bitdefender and Comodo deal with web-based malware and viruses when I attempt to download them from the internet. I also want to see if each scanner can detect malware that already exists on my device.

For the first test, I downloaded four sample malware files and three live samples from the European Institute for Computer Antivirus Research (EICAR) to examine how effectively the program blocked them in real-time. The findings are displayed below.

Comodo’s real-time scanner successfully blocked everything, putting it on the same level as ESET and McAfee for real-time scanning effectiveness in some of my previous tests. 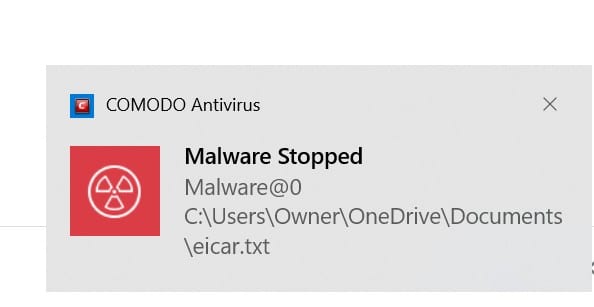 Bitdefender also successfully and efficiently detected and deleted all files in real-time.

I turned off real-time detection to see how the on-demand scanning function of each provider compared. I used the same four EICAR files and three malware samples. This time the files were stored on my PC hard drive and the on-demand scanner was tested to see how many it found and quarantined.

Bitdefender’s quick scan failed to find any test virus samples (EICAR or live samples). The full scan performed much better and found everything.

Comodo seems to feature a real-time scanner, which cannot be disabled in the settings. It is effectively impossible to install malware samples while Comodo is installed without it detecting and eliminating them. Those files can be downloaded, but Comodo will still remove them when you try to install them.

I compared the length of the full scans in minutes and how many items each checked in that time.

Comodo’s scan concluded in a much shorter time than Bitdefender but it also scanned far fewer files. Bitdefender managed to examine 4.2 million files compared to Comodo which manages approximately half a million files.

To confirm my own test results were giving an accurate picture of the two providers, I wanted to see how well Comodo and Bitdefender were rated in the latest independent antivirus lab tests by AV-Comparatives and AV-Test.

AV-Comparatives runs a few different tests for home and business antivirus software. The two I want to concentrate on for my comparison are the Real World Protection Test and the Malware Protection Test.

These tests are similar to the ones I performed. One sees how well the software protects against online threats as they occur such as downloading infected files. The second test looks at how it deals with existing threats on the computer’s drive, or on USB and flash drives connected to the device.

During the period between July and October 2021 AV-Comparatives’ real world protection test challenged a number of antivirus software against the same 743 malware test cases.

Bitdefender did well in the test,  protecting against 99.7 percent of all threats. Comodo was not included in this test.

Again Comodo was not included in the test by AV-Comparatives.

The latest test results are available from September and October 2021. Bitdefender scored 100 percent success in both versions of AV-test’s results, for both September’s and October’s tests.

From my test results and those of the independent labs, it’s pretty clear both Bitdefender and Comodo do a great job at protecting home users against malware and viruses.

When choosing antivirus software, consider the impact it may have on the performance and speed of your computer. The last thing you want to do is spend money on software just to have it slow down your device. The results of the quick scan on system resources are shown in the table below.

During a quick scan, Comodo consumes a lot of CPU power while having little effect on memory and disk use. In contrast, Bitdefender’s CPU usage increased from 32 percent to 56 percent during its quick scan. Its memory consumption increased by 7 percent, and disk utilization increased dramatically from 65 MB/second to 3577 MB/second.

The results of a comprehensive scan with both providers are shown in the table below. Bitdefender’s increases in CPU, memory, and disk use corresponded to the increases seen during the quick scan.

As with the malware protection segment, I’d like to compare my results to those of a reputable testing lab. AV-Comparatives assess antiviral performance by evaluating the speed of typical actions performed on a PC while an antivirus scan is running in the background.

These activities are outlined below:

The test was carried out in October 2021. Bitdefender scored as extremely quick for all tasks except file copying on the first run and program launch on the first run, which were rated as average.

There is no performance data for Comodo from AV-Comparatives, however the most recent accessible reports from AV-Test awarded Comodo an overall performance grade of 5.5 out of 6, indicating that it performed quite well.

Bitdefender and Comodo each have their own unique set of security and privacy features. Of the two, which has the most beneficial tools for the end user? The following is a list of each model’s main selling points.

Here is some detailed information on a few of the key features:

Enhanced privacy and security are available from both providers, but Bitdefender has more features and capabilities that will be of value to the majority of customers.

Bitdefender directs you to a checkout page after you’ve picked the security bundle to which you wish to subscribe.  You’re required to check a box at the bottom to confirm that this is a recurring subscription that will continue until you cancel it. This degree of openness is important to me since it at least alerts customers about the policy’s renewal terms. Bitdefender can be downloaded in a matter of seconds, and the file installer will guide you through the installation process on your device.

There are a lot of security solutions on Comodo’s product website, and it’s difficult to compare them or figure out which ones are best suited for home or business usage. Just make sure you choose the home PC edition on the checkout page and that’s what you get. The checkout process is simple and safe and you can then download the program to your computer or mobile device. It took me less than a minute to download and install on my PC. 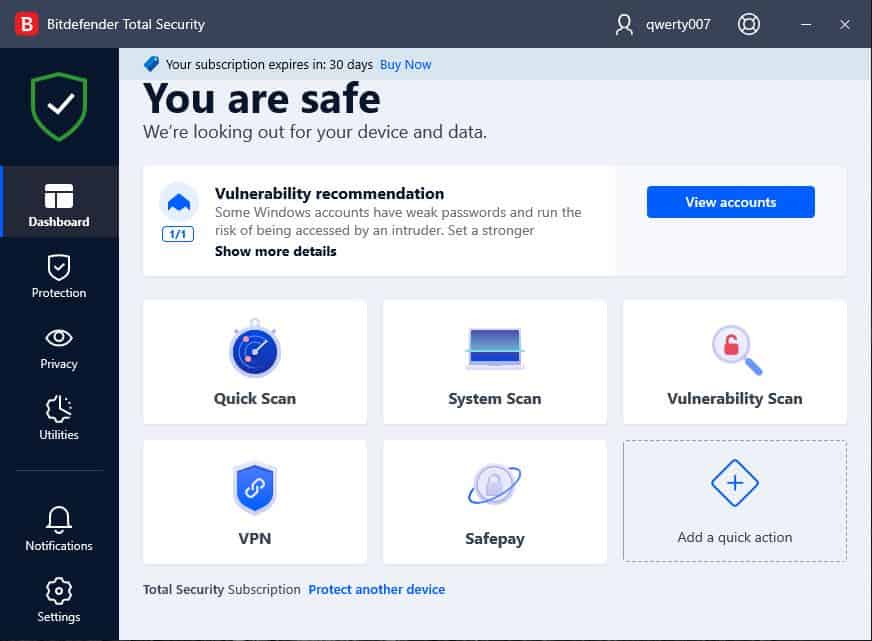 Bitdefender has a color palette of gray, white, and blue. It displays the status of the system on top of the screen, as well as connections to its most important functions. 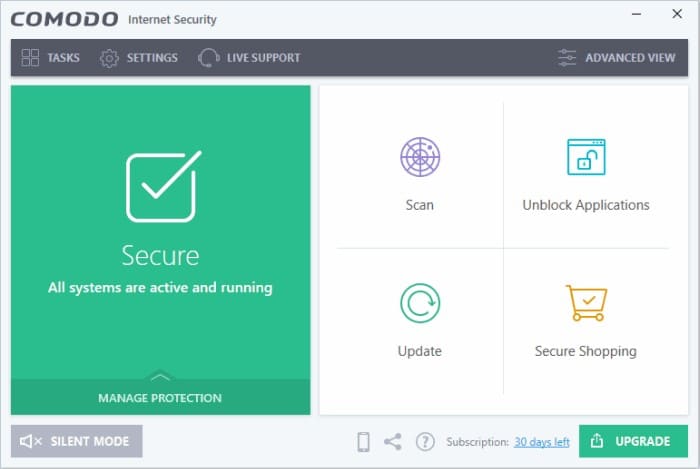 Comodo has a similar layout. Colors for the new Comodo interface include green, white, and light gray. A status message lets you know if your PC is presently secure, or if you need to take any steps. On the software’s home screen, you’ll find everything you need within easy reach.

Who can you call if your antivirus program fails? Is there simple access to technical help and knowledge? Let’s examine how Comodo and Bitdefender’s customer assistance compares.

I’m not sure why, but the main website navigation redirected me to SSL support. To contact support, I had to go to the Antivirus Complete Product website.

Bitdefender’s help center includes phone, live chat, email, how-to videos, a user community, and support articles. The support is neatly organized by product, and you can filter it by clicking the picture of your product at the top of the page.

In conclusion, Comodo is a decent antivirus program, but Bitdefender outperforms it in most areas, including the most critical: malware protection. Bitdefender’s real-time and on-demand scans detected and stopped all infections and crucially scanned far more files than Comodo in my tests. Bitdefender’s first year discounts make it a good buy. Unless you want the limitless VPN provided by Bitdefender Premium Security, I prefer Bitdefender Total Security.