Kaspersky vs Sophos: Which is better?

It's a battle between two antivirus programs to find out which performs better in protecting against malware. Should you choose Kaspersky or Sophos?
Steve Adams 15+ years experience in the tech, privacy and security space 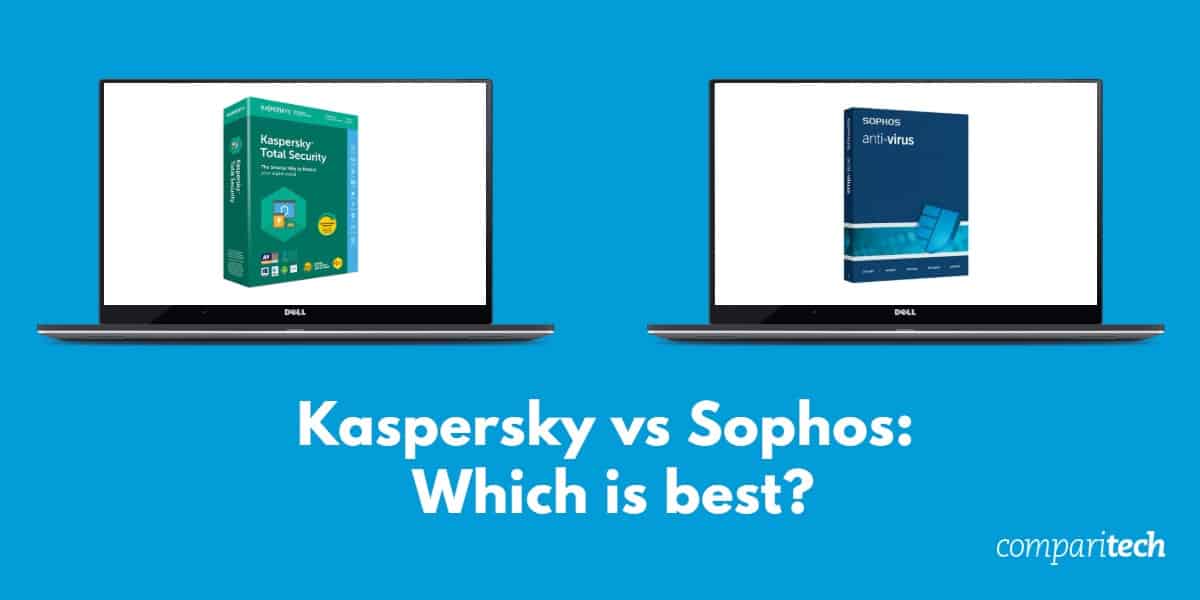 This review will compare the benefits and flaws of two different antivirus suites, the premium solutions from Kaspersky and Sophos.

Kaspersky Lab was founded in 1997, and as of 2016 held the largest market share in the European antivirus industry. Much of its industry prestige comes from its success in investigating new and emergent antivirus threats alongside companies like Microsoft.

With over 30 years in the antivirus industry, Sophos has a long and storied history in this sector, focusing on holistic endpoint connection over multiple devices in a network.

Regardless of industry reputation, the most important thing is how well the program protects your personal devices during everyday use.

This review contains a comprehensive breakdown of the differences between the two suites. I will examine each software’s performance impact, features, efficacy against malware, price, ease of signup and installation, and the accessibility of each user interface.

Not sticking around? here’s the winner

I found Sophos to be a better option than Kaspersky. Kaspersky heavily collects data from its users, which is an immediate red flag for me. Sophos offers a free trial of its product, no credit card required, letting you try all of its features for a month.

Speaking of features, Sophos includes parental controls and powerful malware scanning. You can read my full reasoning for choosing Sophos later in my conclusion.

Here’s what I found when comparing Kaspersky to Sophos:

Kaspersky was founded 23 years ago in Moscow, Russia by Eugene and Natalya Kaspersky. It cut its teeth on defense against new and innovative cybersecurity attacks – the foundational Kaspersky Lab program being developed several years before the company itself.

Sophos was founded in 1985 in Abingdon, in the United Kingdom by Jan Hruska and Peter Lammer.

It started with the development of end-point security throughout the late 1980s and into the early 90s. It later reoriented itself towards wider antivirus coverage towards the turn of the century. It has over 3,000 employees and operates in over 150 countries.

The basic protection offered by Kaspersky is its Kaspersky Anti-Virus solution. This retails on its website for $11.99 dollars for a single device, discounted from $39.99.

The company’s mid range solution, a balance of cheaper price and a larger suite than the other two. At the time of writing, this solution retails at a 70% discount from the usual $59.99 price at $17.99 on its website.

Kaspersky’s premium solution is its Total Security production, which is more expensive than the previous two entries in its antivirus range but is also offered at a much steeper discount. Coverage for three devices normally retails for $89.99 for one year, but is currently being sold for $26.99 with a 70% discount.

Sophos Premium Antivirus retails for $59.99 for one year, although is offered at the time of writing on its website at a 25% discount, putting its price point at $44.99 for the first year.

The primary concern for any antivirus review is how effective each antivirus system is against cybersecurity threats. These threats include viruses, malware, worms and trojans. A program that can quickly and effectively stop any attacks of this kind is vital.

To test the two products, I will first examine how each performs against malware test files from the European Institute for Computer Anti-Virus Research. There are four sample files, each one simulating various different malware scenarios.

I am looking to see if the programs detect and block the samples, and how they do that. They will also be put up against some live malware samples, including adware and trojans.

This table shows how the two antivirus programs performed against the samples from EICAR:

As you can see, both suites blocked all EICAR files in real time, demonstrating the efficacy of the two different antivirus software at handling malware.

Blocking in real time demonstrates the ability of the software’s base background protection, not how effective its scans are. What we can see from this table and the table below is both have powerful real-time scanning options.

The table above also shows how both suites perform against actual examples of malware. Each premium software was put to one adware sample and two strains of Trojan attacks. Here is how they did:

On its Real World Protection Test, AV-Comparatives ranks Kaspersky at 99.9% protection rating, having blocked all but one of the 754 sample threats the site put against it.

When put to the March 2020 Malware Protection Test, Kaspersky again placed in the upper cluster for its functionality against active malware threats. It scored a Malware Protection rating of 99.97%, with a system being compromised in only three of 10,249 different malware infection scenarios.

AV comparatives ranks Kaspersky’s protection as “advanced+” in both tests, placing it in the top three-star rating for performance against cybersecurity threats.

Sophos was not included in the antivirus solutions examined by AV-Comparatives.

In comparison reviews, I examine how each antivirus software impacts system performance with quick scans and full scans. 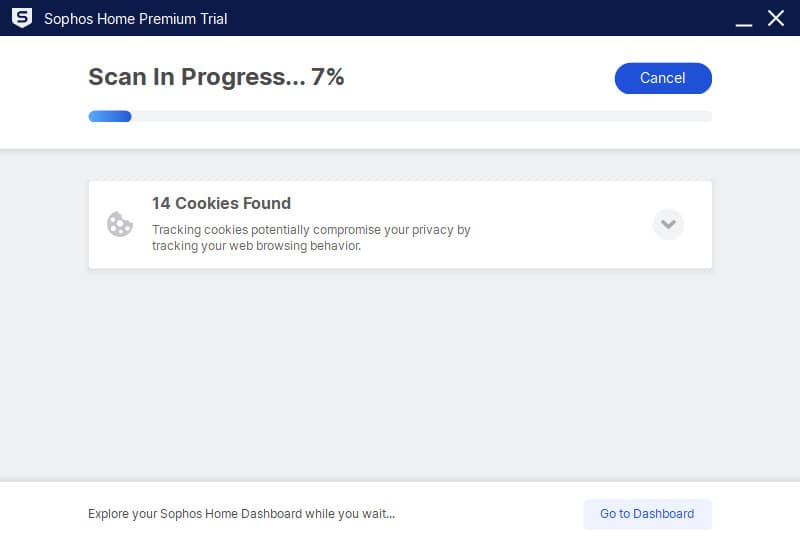 To see how Kaspersky and Sophos impacted PC performance, I recorded how system resources were used by each program when idle. I then recorded the same metrics during both a quick scan and full scan.

This table demonstrates the control CPU and memory usage during a quick scan.

It should be noted that Sophos does not actually offer a quick scan. For Kaspersky, the figures show its quick scan CPU utilization increased on the control by 35%, and impacted memory utilization by 3%, over a 273 second time frame.

Next, I checked the full scan function of both antivirus programs. I compared the time that a full scan takes to finish and how many items a scan covers during its runtime.

Not only compared to Sophos, but also several other antivirus competitors, Kaspersky’s full scan takes a long time. Clocking in at 3 hours and 47 minutes to scan just over 2 million different items, it is several magnitudes larger than not only Sophos’, but other companies that were also put to the same test. Of all these companies, only Bitdefender delved deeper, but it did so in under half the time.

Sophos’s full scan takes only 15 minutes to complete, much less time than its competitor. One important factor to note is that Sophos offers no details whatsoever in regards to how far its scans delve, or any details of its scans beyond if it finds any threats. This is odd for AV software, as most let users know what was scanned in that time.

I also recorded the performance impact during full scans of each product.

Kaspersky’s scan increases the CPU usage up to 100% from 46%, and increases memory utilization by 6%. Sophos’ scan provides an 18% increase in CPU utilization and a 4% impact on memory usage.

It should be noted that Sophos’ scan is highly irregular in that it takes ust 15 minutes and does not openly disclose any data on how deep its scan delves, or any details aside from the scan time.

Below are two features that particularly stood out from each of their tool lists.

Kaspersky offers a virtual private network as a separate VPN subscription. It provides both a free VPN and a premium option.

The free VPN is an extremely limited one, with a 200MB/day data cap, which can be extended to 300MB/day if you register your email address with Kaspersky. This adds up to a decent data cap per month for browsing securely, but it makes attempting to stream or download anything on that plan problematic. The expanded 300MB/day VPN is included in Kaspersky Total Security.

A premium subscription for Kaspersky’s VPN will cost you $4.99 extra for a monthly subscription, and paying for a full year up front drops that price to roughly $1.67 a month. While you get a much smaller feature list compared to leaders in the VPN market like ExpressVPN or Hotspot Shield, you do pay a fraction of the price for it.

The app is available for Windows, MacOS, iOS and Android, with respectable internet speeds on each system.

The VPN lacks a kill switch—data security when VPN connection drops—and only has locations available in 18 countries.

Sophos’ central focus is endpoint cybersecurity for businesses, and network management is a large focus of that. So it comes as no surprise that its consumer antivirus entry contains traces of this ethos.

If you purchase the company’s 10 device premium protection, and you were using it to protect a family for instance, you can nominate one device to have security management privileges on all the other devices.

With Sophos Home you can manage the security for multiple PCs and Macs, no matter where they are located in the world.

The sign up and installation process for both Kaspersky and Sophos was very swift and efficient. Each website takes a couple of clicks to get to the installation pages for the software. Each includes options for a free trial before you click through to purchase the premium programs.

Kaspersky’s website is clearly laid out, with the installation path relatively easy to follow. It took me three clicks and a slight amount of scrolling to get to their checkout page, with a standard four-step process to purchase the product.

The story was roughly similar with Sophos’s website. There is a key difference. One of the central benefits of Sophos’ AV software is what it provides in free trials. While it offers a downloadable free trial, it also lets you run its AV software in an online simulated environment, which allows for a glimpse of how it operates without downloading anything.

With Sophos, interactive panels are denoted by white on gray, and orange highlights showing new areas of development. 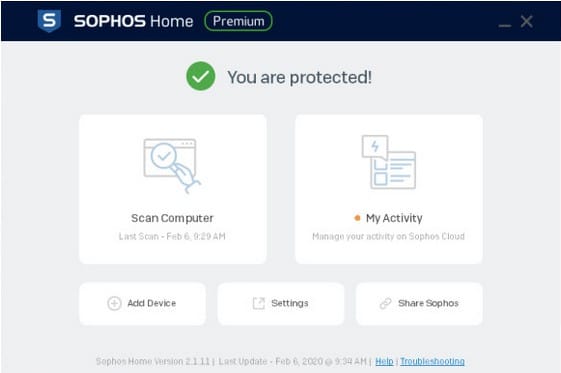 For me, Kaspersky’s layout comes out on top. The text is clearer, the organization of its larger feature list into much easier to navigate.

Kaspersky’s support center is accessible both through its apps and its website, as a part of a central banner displayed on all pages of its website. Through this interface, it provides access to FAQs, a support email address, and a knowledge base forum.

Sophos also offers 24/7 support and a user knowledge base in its forums. This is easily accessible through the top banner of its website. The company’s premium support has paid technicians available for live email and chat from 8am-8pm EST Monday-Friday, and has a knowledge base for quick topic search – including its FAQs and general topic coverage. 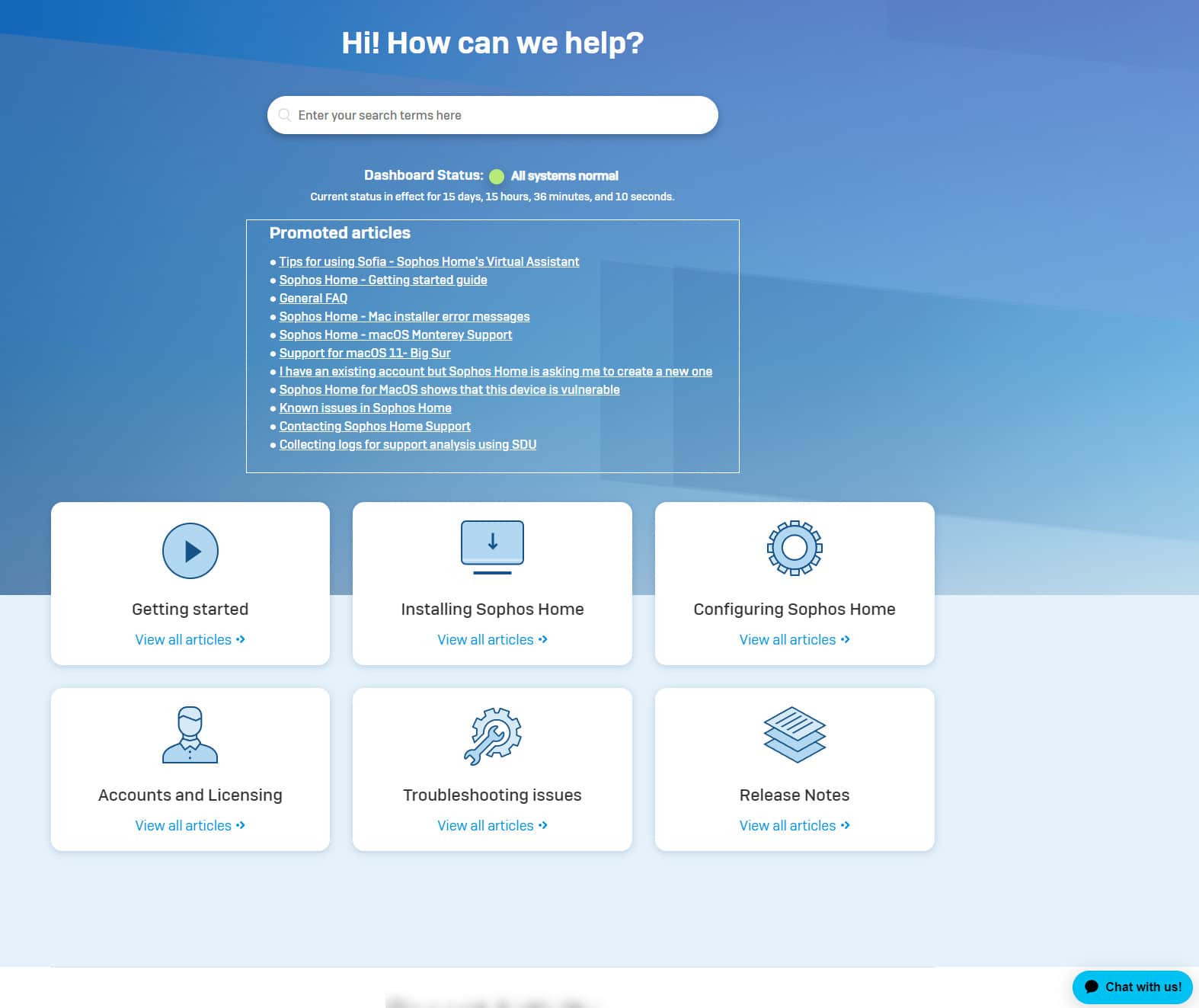 Although Kaspersky has some great features and first-year discounts, Sophos was my pick for this comparison. The malware scanning technology used by Sophos is consistently tweaked to deal with new threats, which was evident in its malware scanning results. Sophos’ performance has a low impact on PC resources, and its software is simple enough for new users while providing additional settings for experts.

Thanks to Sophos providing a 30-day trial of its premium offering, it lets users try before they buy – something not offered by Kaspersky. Sophos’s customer support is excellent, and useful features such as parental controls and banking protection provide security beyond basic malware scanning.