Ready to find out if Malwarebytes Antivirus is worth the bang for your buck? You’ll

find everything you need to know in my in-depth review.
Malwarebytes entered the internet security realm in 2006 with its first software for Mac and Windows, known as Malwarebytes Anti-Malware (or MBAM). As of 2017, the company had an 800+ strong staff team to keep everything running smoothly for the millions of devices protected across the globe.

For my review, I’ll be focusing on Malwarebytes Premium, covering the following topics:

Aside from putting its malware protection to the test, I’ll be looking at the additional features included and whether they add value to the overall product offering. I’ve included a summary of the customer support options available for home users and other factors to help consumers decide whether Malwarebytes is the right option.

Throughout the review, you’ll find references to test labs that I use to benchmark my own tests against and see how Malwarebytes stacks up against its competitors.

If you haven’t got time to read the entire Malwarebytes review, I’ve provided a round-up of reasons to try or avoid the software below. 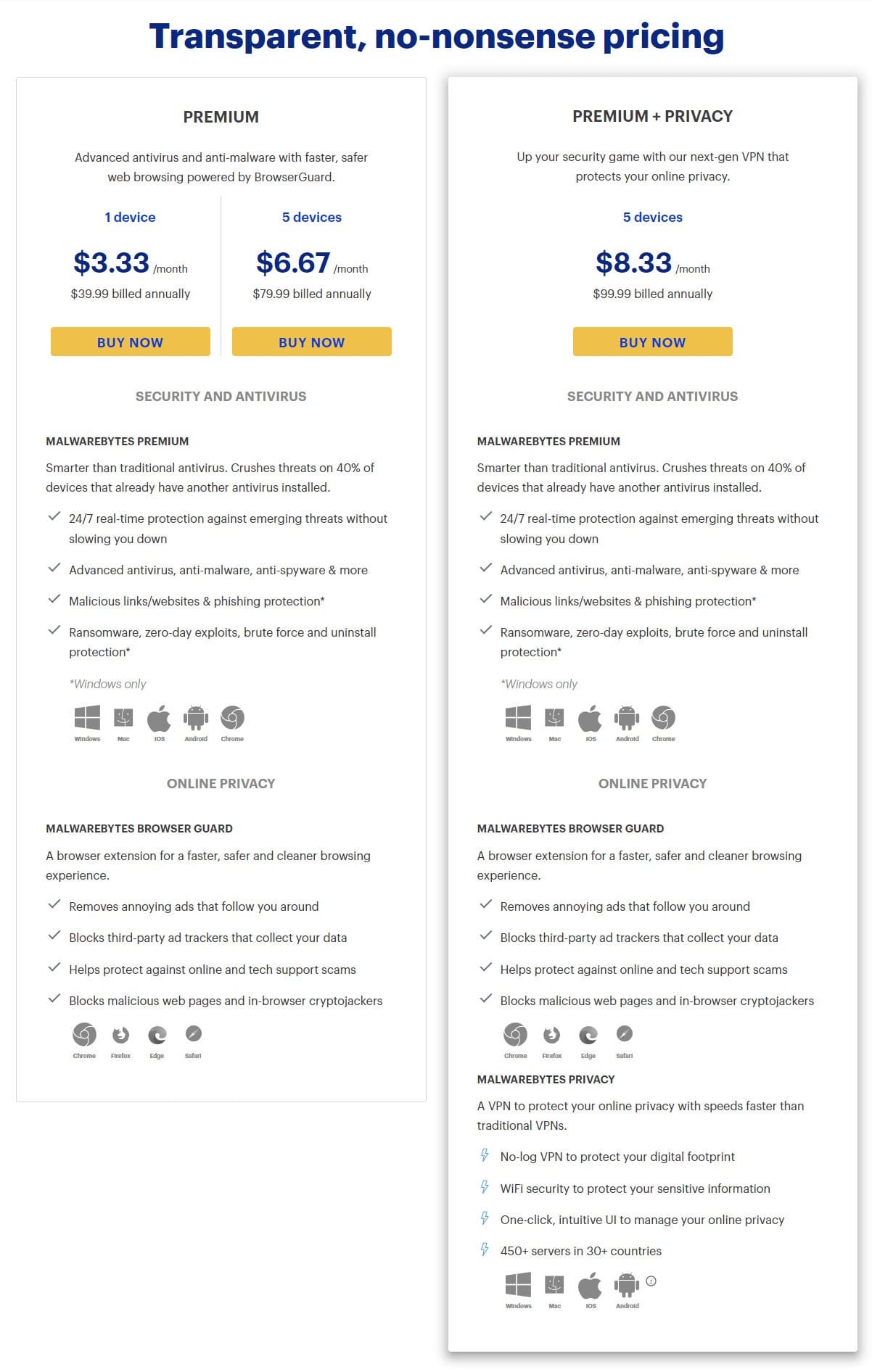 Much like other antivirus providers, Malwarebytes gives its users a selection of plans to choose from. Its three packages range from free essential protection to an internet security suite that includes a VPN to protect your online privacy.

To provide an idea of what each plan has to offer, I’ve broken down everything you’ll get from each product below:

At the very base of its plans is Malwarebytes Free, which misses many of the necessary features included in its premium plans. The main feature of its free antivirus is on-demand scanning, which scans your system for existing threats that may have been downloaded or introduced via an offline medium such as an infected USB drive. Real-time protection, which proactively scans for threats as they attempt to infect your computer, is not included.

Malwarebytes premium costs $3.99 per month or $39.99 per year at the time of writing. Unlike providers like Norton, Malwarebytes doesn’t include an incentive for users to sign up for an annual plan rather than paying monthly – the price paid is the same regardless, with no discounts.

This suite includes real-time malware scanning and on-demand scanning to fight spyware and malware threats. You’ll also benefit from ransomware and brute force protection, and phishing protection to prevent you from falling victim to fake websites that attempt to steal your data.

Malwarebytes Browser Guard also comes included free as a browser extension for Chrome, Firefox, Safari, and Internet Explorer. This tool blocks ads and trackers that follow your activities across the web. It also prevents cryptojacking attempts and blocks malicious websites and URLs by redirecting you to a secure page.

Malwarebytes’ top-tier package includes everything that you get with Malwarebytes Premium with the addition of an unlimited VPN. A VPN (Virtual Private Network) helps to privatize your online activities by providing a virtual IP address that cannot be traced back to you. A VPN also allows you to watch the movies and TV shows you pay for at home from anywhere.

You’ll get access to 450+ servers in 30 countries and have peace of mind that its VPN doesn’t collect logs of your activities, but this will cost you $8.33 per month or $99.99 per year, which is vastly more expensive than standalone VPNs like Surfshark.

All plans include a generous 60-day money-back guarantee, so you’ll have a whopping two months to try all Malwarebytes’ features and to request a full refund should you not be happy.

All Malwarebytes packages support a variety of platforms to ensure each of your devices benefit from all-around protection. Check out the table below to see if your operating system is supported.

One of the most important aspects of any antimalware software is its ability to detect and clean up nasty threats on your system. Malwarebytes promises to “Destroy ransomware, spyware, adware, viruses and other malware, ” so I tested the software to see if it lived up to its word. 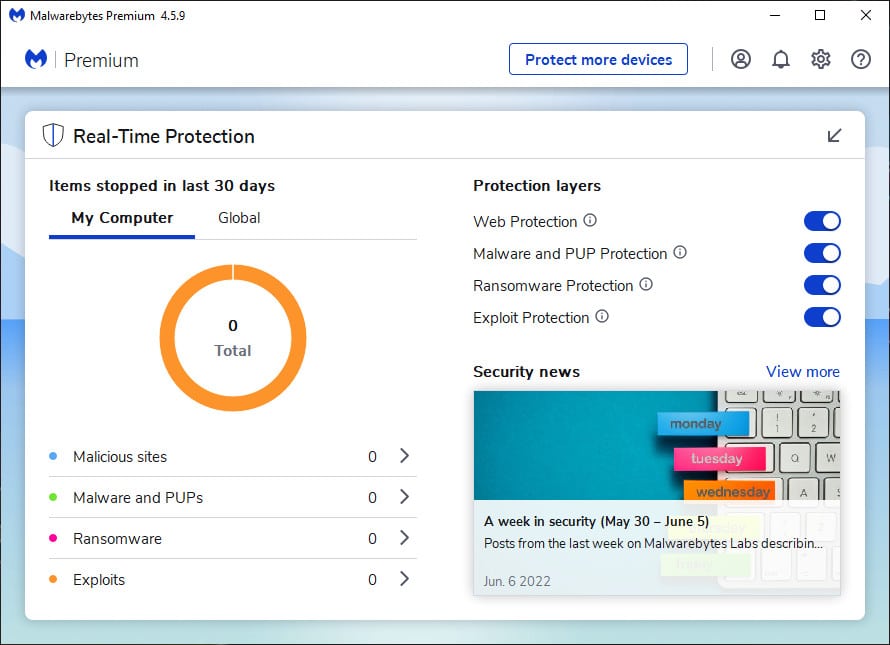 First, I used a series of inert malware samples obtained from the EICAR (The European Institute for Computer Antivirus Research). The four samples consisted of a raw executable, a .txt file, and two compressed executables.

I also obtained three live virus samples which could theoretically cause system damage if not picked up by an antimalware application, but as a precaution, I used these in a sandbox environment.

I enabled real-time protection before downloading the samples to see if Malwarebytes would detect the files as they reached my system. As you can see from the table below, the results were a little underwhelming.

While Malwarebytes blocked all three live samples, it only stopped the raw executable and one of the compressed EICAR files. It didn’t pick up on the .txt file or the second zipped executable. 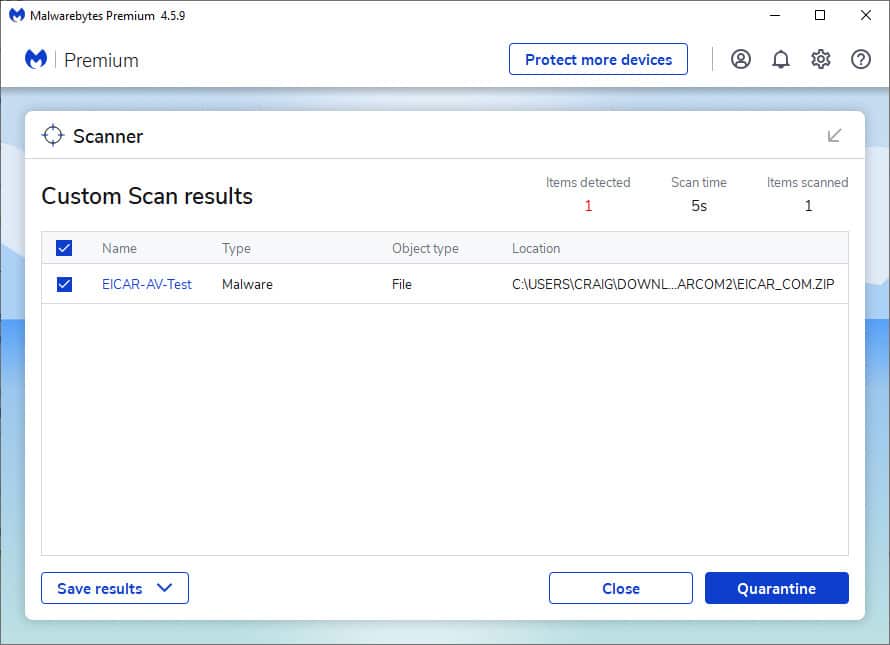 For comparison, Bitdefender blocked every malware sample I threw at it without any issues. 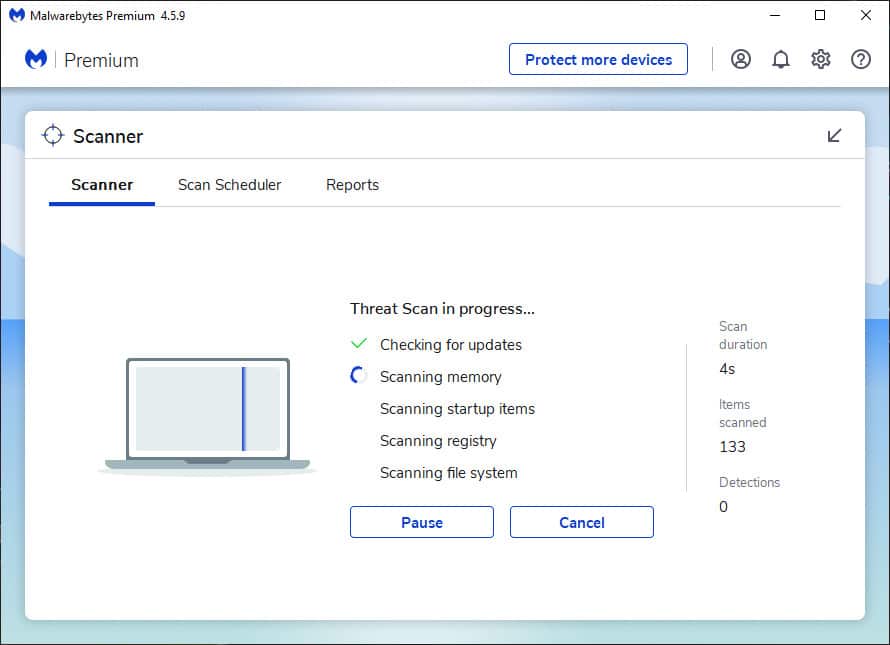 Next, I wanted to see how Malwarebytes performed when performing quick and full scans of my system. I disabled real-time protection and re-downloaded all live virus samples and EICAR test files.

I ran a quick scan of my system, which was completed in 90 seconds. For comparison, Bitdefender’s quick scan was more in-depth at 338 seconds. Malwarebytes failed to detect any of the malware samples.

The complete system scan was more in-depth at 256 minutes, scanning 859,819 files, and the results were interesting. The table below shows the full-scan time of Malwarebytes’ competitors.

Malwarebytes picked up all of the EICAR and live samples except for the .txt file.

While the tests run on my system are pretty clear cut, I wanted to ensure my results weren’t one-offs, so I took my research and compared it to AV-Comparatives – a world leader in antivirus testing.

AV-Comparatives runs several tests throughout the year, though I’m only interested in the Real-World Protection Test and the Malware Protection Test.

The Real World Protection Test puts antivirus software against a series of test malware samples to understand how the software’s real-time malware detection reacts to online threats via a malicious website.

One of the most recent tests available is from Feb-March 2022. Malwarebytes performed well with a 100% protection rate, blocking all 362 of the live samples. However, it also reported 31 false positives (classifying genuine software as malware), significantly higher than competitors TotalAV and Avast.

The Malware Protection Test focuses on the ability to detect and block threats introduced in an offline environment such as a USB or network drive.

Putting malware testing to one side, Malwarebytes includes many other useful features that go a step further to secure your system from online and offline threats.

Whether you like it or not, Malwarebytes pushes its secure web browser extension with all of its premium software packages – but that’s not necessarily a bad thing.

Firstly, it boasts that it speeds up your browsing experience by blocking ads and preventing trackers from following you around the web. It also blocks access to malicious websites that may contain malware that attempts to infect your system. Finally, it blocks browser hijackers and browser lockers that tech support scammers use to scam you out of money.

Malware has become more sophisticated than ever, with some infections coded to uninstall your antimalware software when they reach your system. Malwarebytes is set up to prevent this from happening, meaning you’ll need some heavy authentication to be able to remove the app from your device swiftly.

While it’s great to have antivirus products that are thorough in their scanning abilities, it’s less beneficial when they negatively impact the performance of your PC. I recorded the resources used on my system during quick, full, and background scanning.

The first table shows how Malwarebytes performed with scanning running in the background and during quick scans.

Considering the quick scan was so fast, it was surprising to see how much memory was used. While the figure was lower during background scanning, it was still higher than I’ve seen with other providers.

Next, I recorded the results during a full scan in the table below.

Interestingly, CPU and memory usage was lower during a full system scan than during a quick scan of my system.

Everything considered, I didn’t notice any lag on my system during any of the scans. The app did stop responding a few seconds after starting the full scan but resolved on the second attempt.

Nobody wants antivirus software that’s hard on the eye or challenging to use, and to ensure Malwarebytes was straightforward enough for new users while giving advanced users extra options, I tested it for myself.

Similar to the color scheme used by Windows Security, Malwarebytes uses a blue and white palette, which gives the software a clean and uncluttered feel. 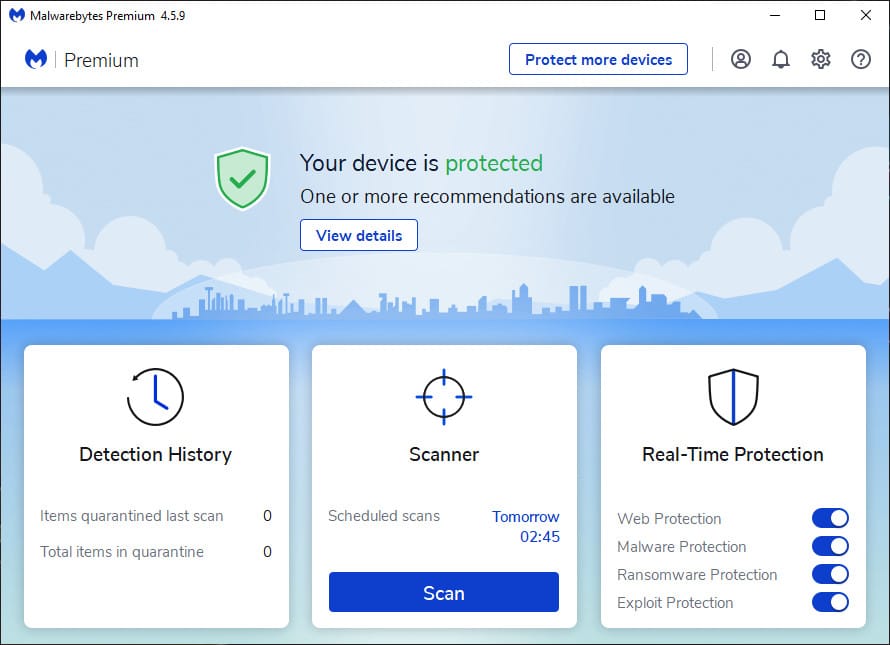 The main interface shows you when everything is running smoothly with a green “protected” message in the header. Three tiles across the bottom of the dashboard give access to past scans and reports in detection history, while the option to run a scan or schedule scans is under the scanner tab. Your real-time protection options are easily accessible using the goggles in the real-time protection tile. 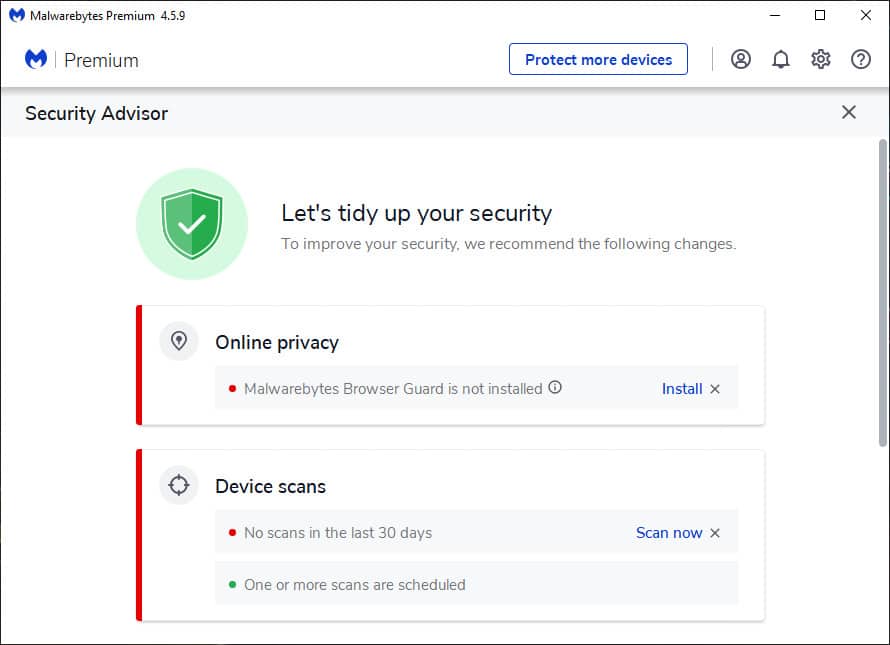 Having support from a commercial or technical perspective when you need it is vital with antivirus software, so I checked out the range of support options available with Malwarebytes.

If you have the Malwarebytes app open, you can click the question mark icon in the top-right-hand corner to see your support dashboard. While it’s useful for quick access, most options (other than the app support tool) open a web browser to continue support. 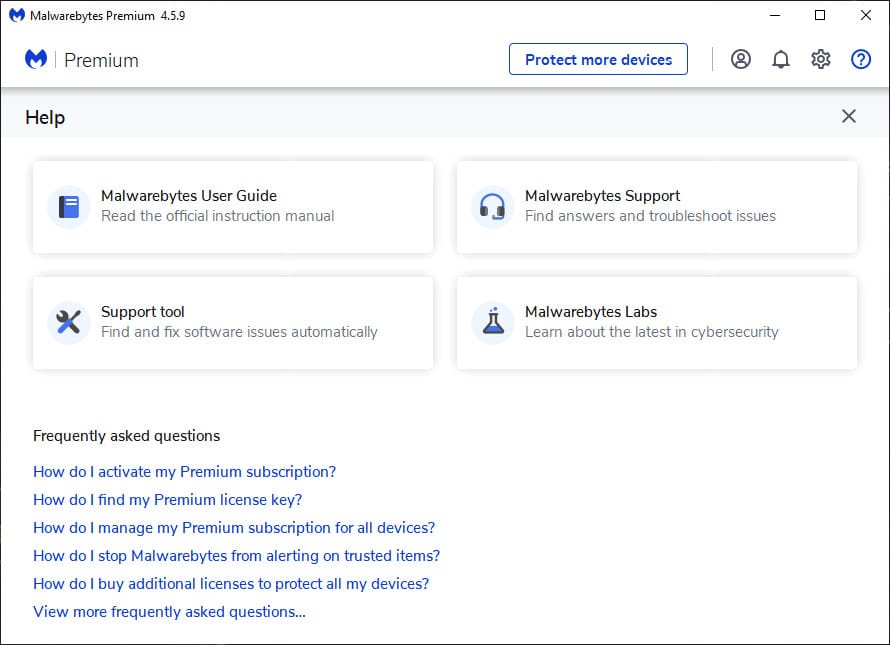 Here, you’ll find several options, including user guides, answers to FAQs, a community forum, and the option to submit a ticket or start a live chat. 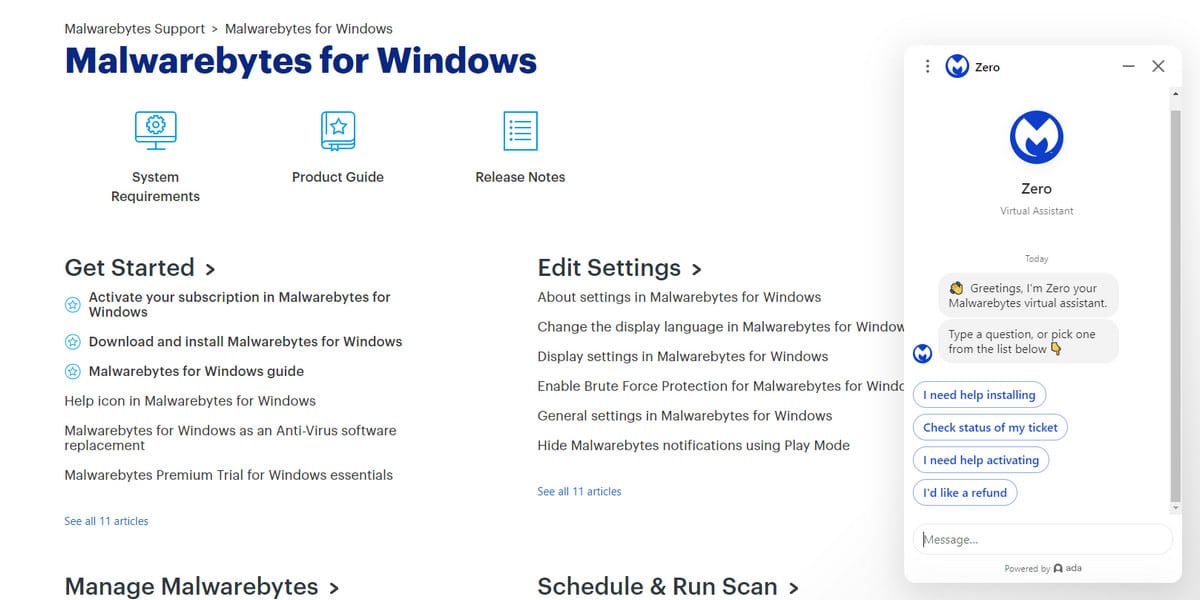 Malwarebytes have upped their game with live chat. Previously you’d deal with a chatbot that then directed you to raise a ticket. However, I was able to get through to a customer support agent.

Malwarebytes may not be for everyone in terms of support, features, or pricing, so I’ve provided a list of the top alternatives below.

Bitdefender: Scoring consistently high in malware and performance tests, Bitdefender is an excellent alternative to Malwarebytes with a VPN across all its plans and other great features.

Avast: This is among some of the biggest names in the antivirus industry. Avast offers free essential protection for most major platforms with unlimited VPN usage across its premium plans.

Malwarebytes offers a great range of protection features for home users, with on-demand scans blocking most malware that lives on your system. The same can’t be said for its real-time scanning capability. Fortunately, it has the backing of independent test labs, which place it as a top performer in identifying existing threats. Malwarebytes regularly updates its malware database to keep up with the latest threats, and ransomware and brute force protection is a nice bonus for dealing with more sophisticated threats.

Malwarebytes’ customer support offering aligns with many of the top providers, with support available when you need it. Its app is easy enough to use but lacks options for advanced users.

If a VPN is what you’re looking for, Malwarebytes premium isn’t the way to go. The price jump to its top-tier product is quite steep, considering a VPN is the only additional benefit. Malwarebytes Premium is worth considering if you can cope without a VPN.