Surfshark has established itself as one of the strongest players in the consumer VPN space. We’ve reviewed Surfshark’s VPN offering many times over the years, and it consistently ranks as one of our top VPN providers.
Like with many successful businesses, there comes the point at which they attempt to diversify their offering by offering new products or services. And that’s precisely what Surfshark has done with its Surfshark One software bundle, which includes an antivirus, a private search engine, and a personal data breach monitoring service, alongside Surfshark’s excellent VPN service – all within a single app.

Of course, this bundle comes with a heftier price tag than just the VPN service. So is it worth it? And can it compete with other established search, antivirus, and data breach monitoring providers? This Surfshark One review answers the following questions:

If you’re pressed for time, you can go ahead and read a summary of my thoughts below. If you have the time and want all the details, I’d recommend reading the whole thing.

Surfshark One pros and cons

The Surfshark One full bundle (all four apps) is available for desktop only. That includes:

However, the antivirus is also available in the Android Surfshark VPN app. That’s not the case for iOS.

Surfshark is a trusted name in the VPN space, and VPNs are tied to security and privacy. So one could argue that it would be an excellent candidate to provide other security and privacy-focused apps and services. Given its VPN service’s reputation, some peace of mind comes with having Surfshark’s brand associated with private search, antivirus, and personal data protection.

As a whole, it’s an excellent service. Surfshark’s VPN is already known as being one of the best out there. Adding private search is nice, but plenty of privacy-focused search engines are already out there – and for free. What makes the Surfshark One subscription worthwhile is really the antivirus and the data breach monitoring. The antivirus is somewhat basic, but it has everything you need, including dynamic scanning of files that you simply drag & drop into the app.

Surfshark’s VPN needs no introduction. It’s one of the most highly-rated VPN services available today. We’ve reviewed it before, and it also scores very high. The reason is simple: it ticks all the boxes in providing VPN users with pretty much everything they could want from a VPN provider. 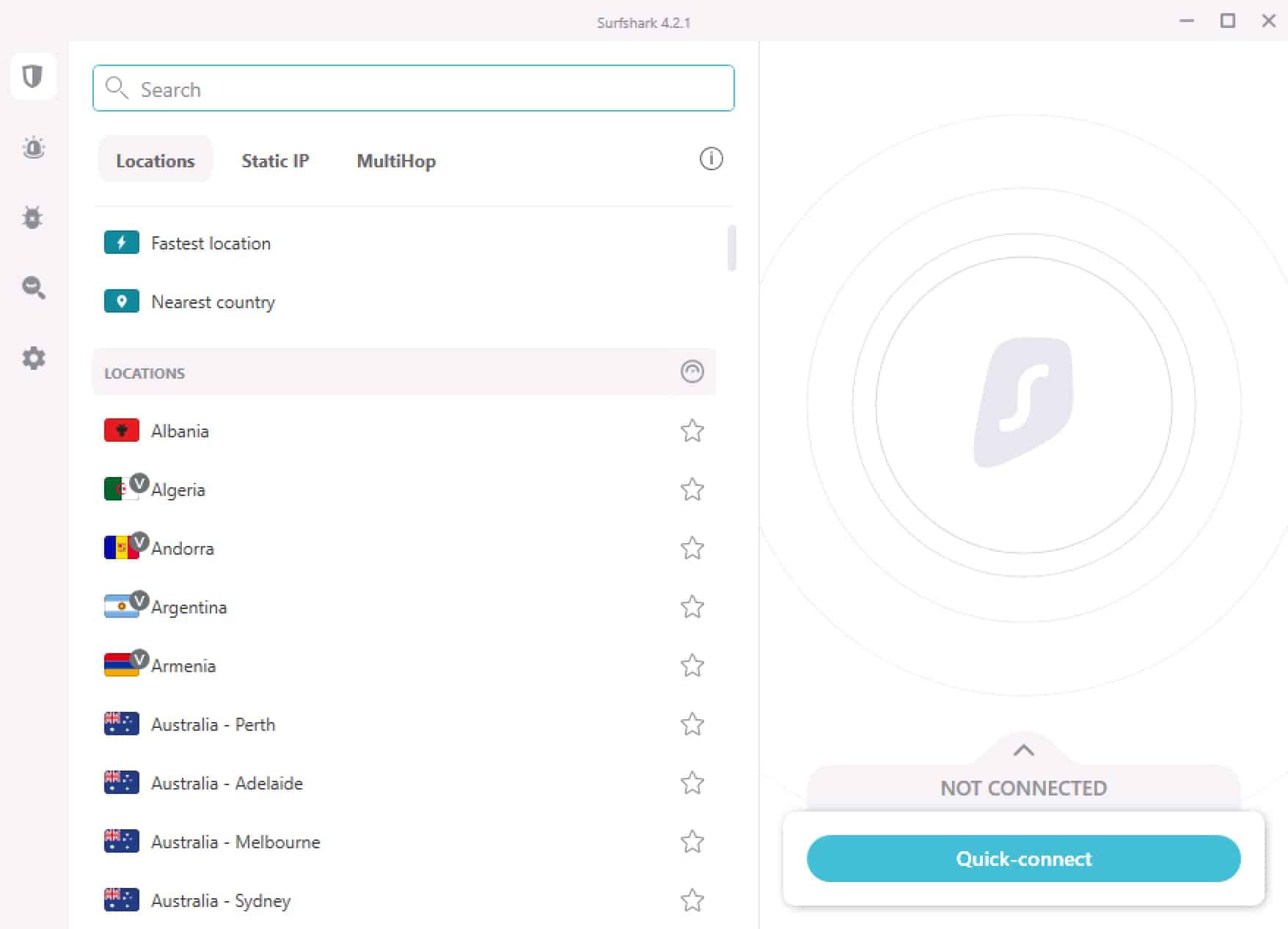 Surfshark provides its users with excellent speeds, secure VPN protocols, and strong, industry-standard encryption. It provides apps for all major operating systems – including the elusive Linux. Its service can block ads and trackers, and all of its apps include a kill switch, which stops you from browsing unprotect should your connection ever drop unexpectedly.

The app also includes a Settings page specifically for the VPN service. 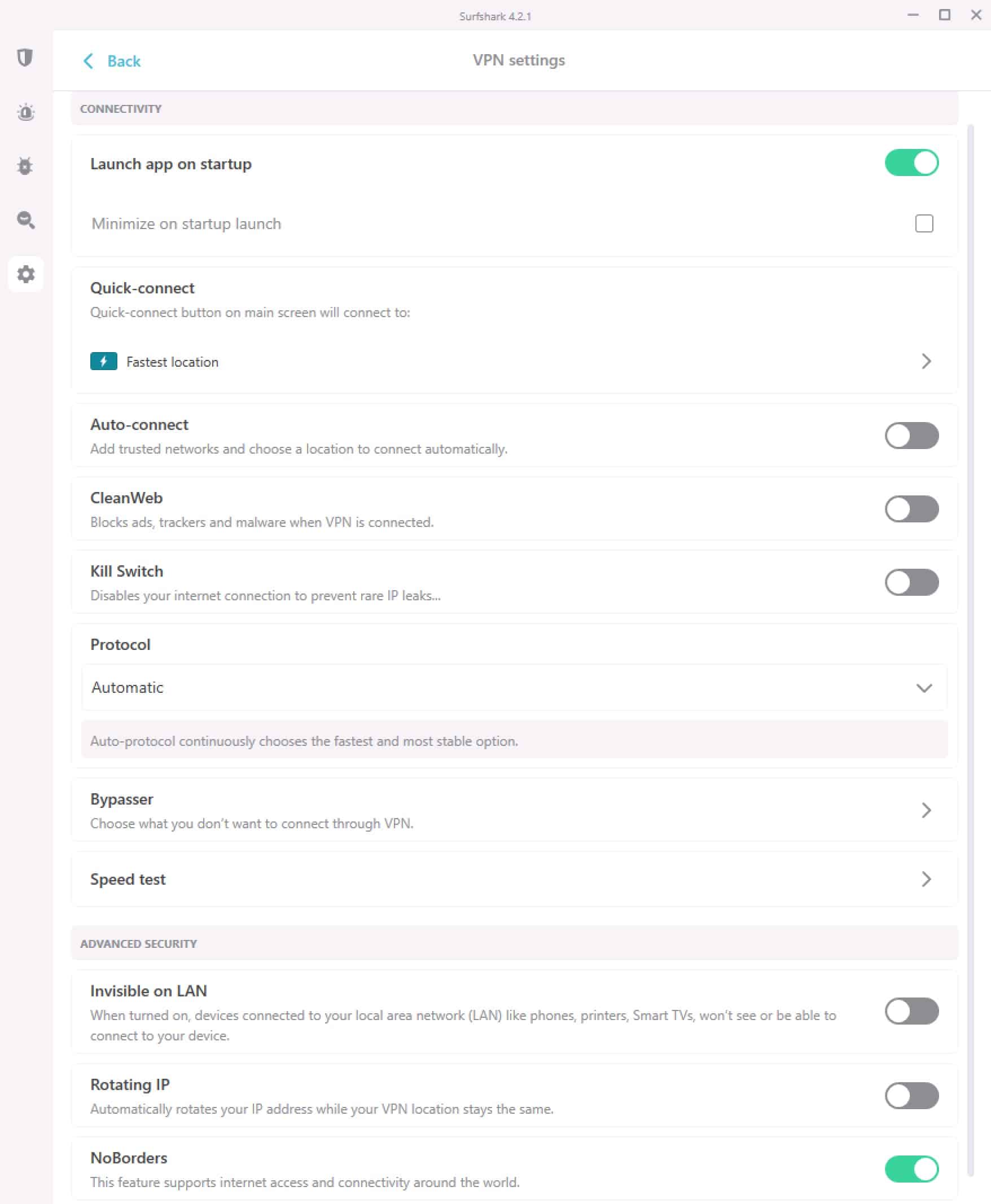 Surfshark plays nice with almost every popular streaming service and supports torrenting over dedicated P2P servers. The service also supports split tunneling, which allows you to selectively route your traffic through the VPN or your ISP gateway on an app-by-app basis.

Regarding privacy and security, Surfshark stands behind its robust no-logging policy and is not vulnerable to IP, DNS, or WebRTC leaks. Moreover, it works in China, provides live chat support, and isn’t particularly expensive.

You can check out our full Surfshark VPN review for all the details on the service.

Now, what about the other products in its Surfshark One bundle?

Surfshark’s antivirus may appear basic at first glance, but everything you need is there. It may not have all the bells and whistles you sometimes find in big-name, dedicated antivirus software. Still, most people tend to stick with the more basic (and essential) functionality an antivirus provides. Surfshark’s offering is sober, straightforward, and focuses on the essentials. I would have no problem using Surfshark as my primary antivirus solution.

Surfshark’s antivirus isn’t listed on AV-Test or AV-Comparatives, so there’s no data to share on that front. 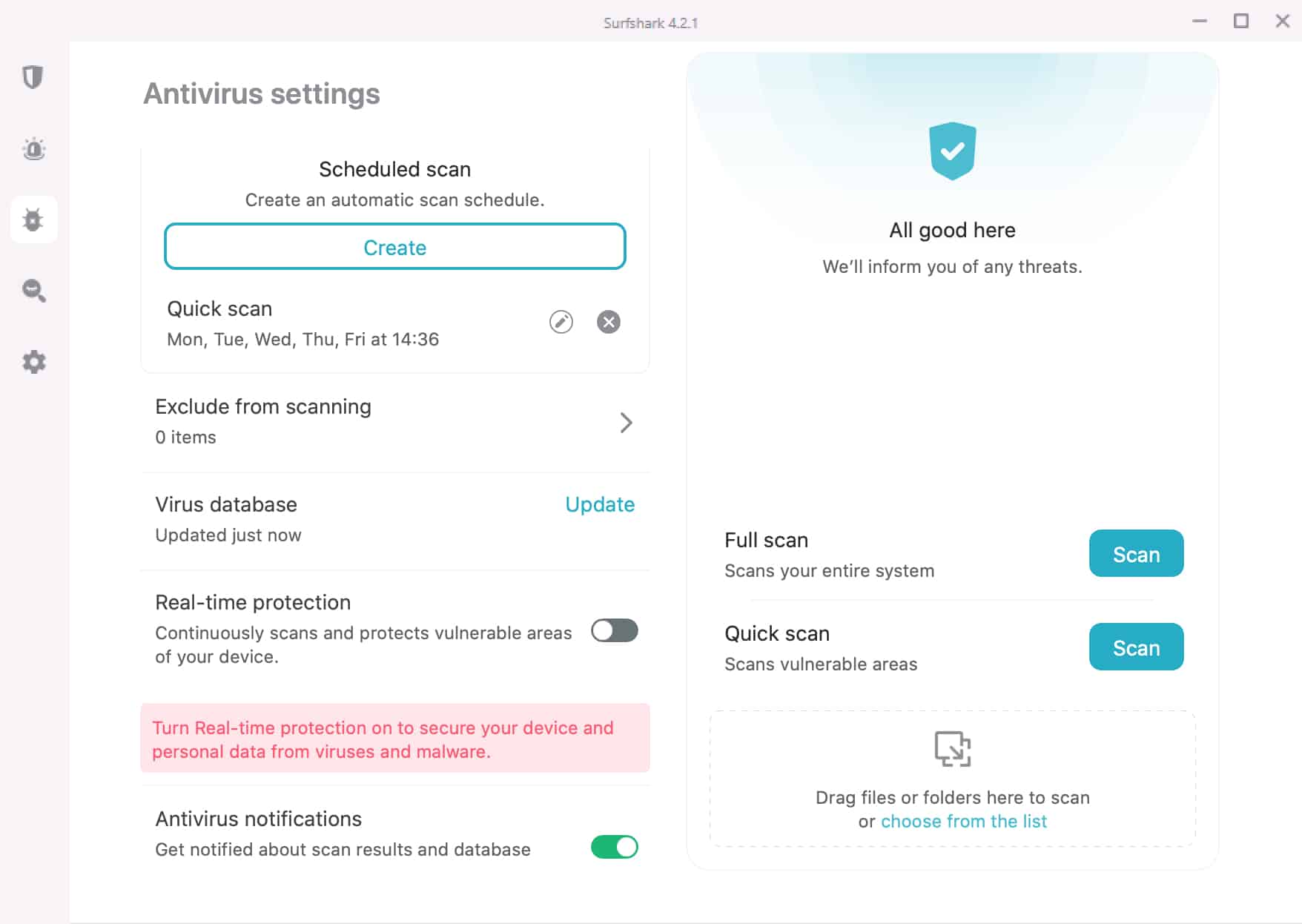 The antivirus app’s layout is clear and intuitive. You have the option to conduct either a full scan or a quick scan. The latter is faster because it scans the most common locations for viruses and malware, while the full scan scans every single file on your drive. And you can set both scans (quick or full) to run automatically at scheduled times.

If Surfshark’s antivirus finds any harmful files, it will automatically quarantine them.

It also optionally provides real-time protection. When enabled, the antivirus will continually scan files as you go about your business and immediately alert you of any issue.

You can also drag and drop files on the bottom right of the antivirus menu to scan specific files or folders on demand.

When it detects a threat, Surfshark’s antivirus quarantines the files and displays an alert. 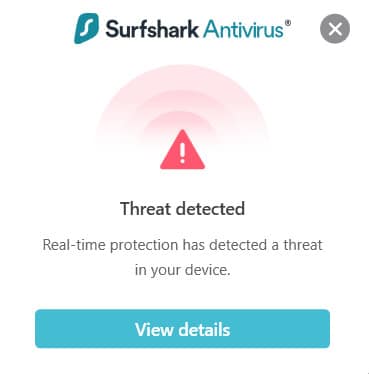 Clicking View Details displays the quarantined file and its location on the hard drive, with the option to delete it. 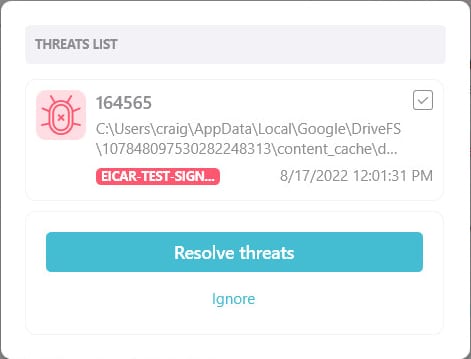 While there are certainly more feature-packed antivirus products out there, they’re going to come with a heftier price tag, and you may well find yourself exclusively using the more basic features anyway.

I tested Surfshark’s antivirus with malware samples from the European Institute for Computer Antivirus Research (EICAR). EICAR provides files that simulate a virus infection without actually damaging your system – they are commonly used for antivirus testing. Of course, I enabled real-time scanning prior to running these tests. The results are below.

Surfshark blocked all of the Eicar samples I tested.

I then tested Surfshark’s real-time scanning with three malware samples, which were zipped executable files (2 trojans, 1 adware). All three were detected, however, I needed to unzip them for them to be detected, which isn’t ideal.

Next, I wanted to see how long it would take Surfshark’s antivirus to complete a quick scan and a full scan of my system.

A quick scan looks for viruses/malware in the most common directories rather than on the entire drive. In my case, this resulted in only 11 files being scanned. 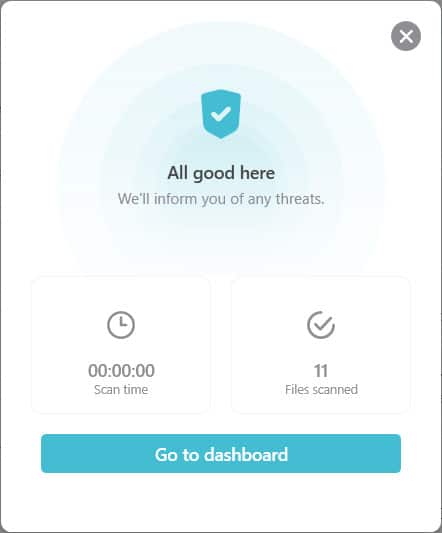 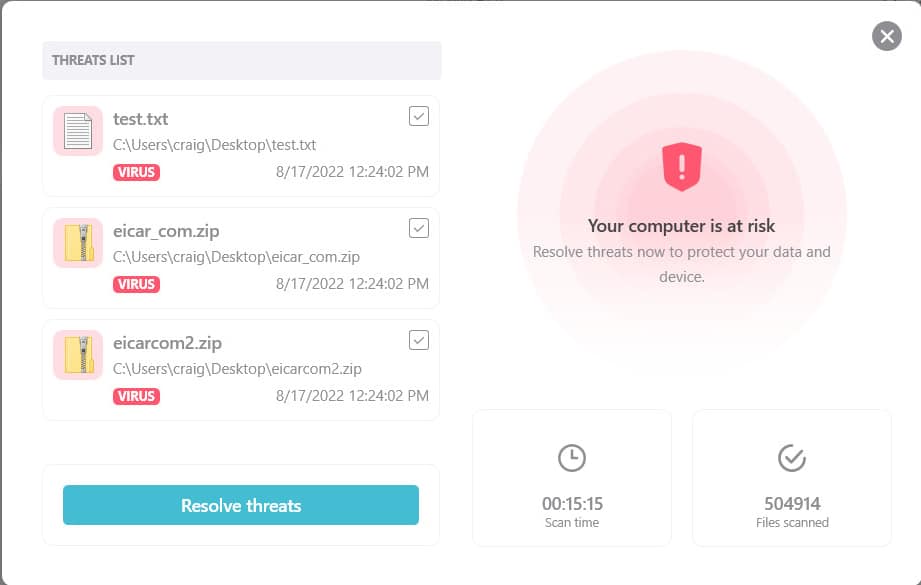 While I was impressed by how fast its full scan was (it scanned over 500,000 items in just 15 minutes), it missed the live malware samples that were on the system (zipped).

Also, bear in mind that the length of the scans depends on the size of your hard drive, the number of files on the drive, and the size of those files. So your mileage will vary.

I wanted to see the system resources Surfshark’s antivirus consumed while running scans. I tested this for both quick and full scans. Here are the results:

The above results are explained by the fact that the quick scan took just a few seconds and scanned just 11 files. There was no measurable resource consumption. 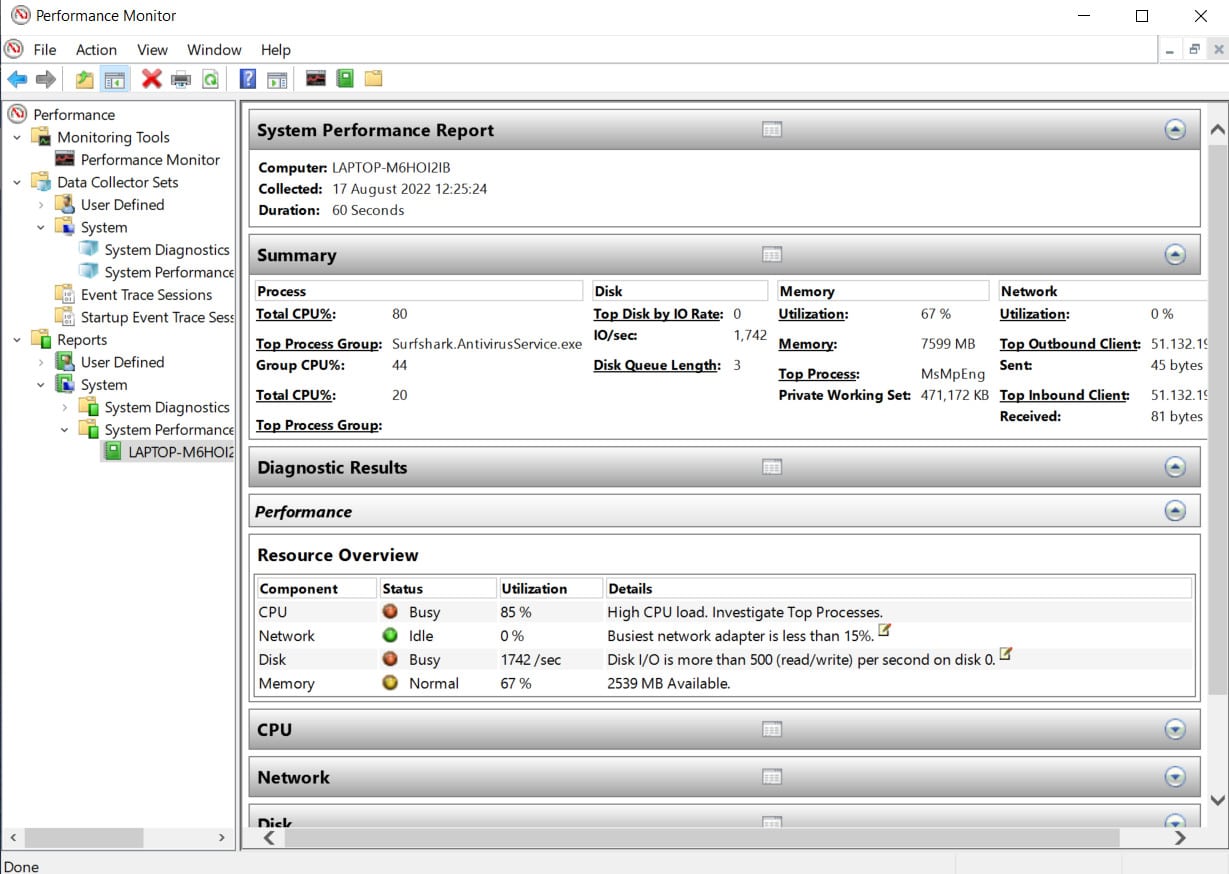 The full scan did consume quite a bit of CPU usage, climbing from 9% (no scan) to 84%. That’s a pretty big jump. Still, I was able to use my computer as the scan was happening and didn’t notice a degradation in performance. On the plus side, the full scan took only 15 minutes – much less time than many other antivirus products.

The Alert feature within Surfshark One is a data breach monitoring service. It will crawl the internet for any compromised personal information in the following categories:

To use the Alert service, you first need to enable two-factor authentication. This requires you to have an authenticator app, such as Google Authenticator. You’ll be redirected to your Surfshark Account page, where a QR code will be displayed. You simply need to photograph the QR code using your authenticator app. Once that’s done, Surfshark will prompt you to enter a one-time password from the app to confirm the setup, and then you can start configuring the service. 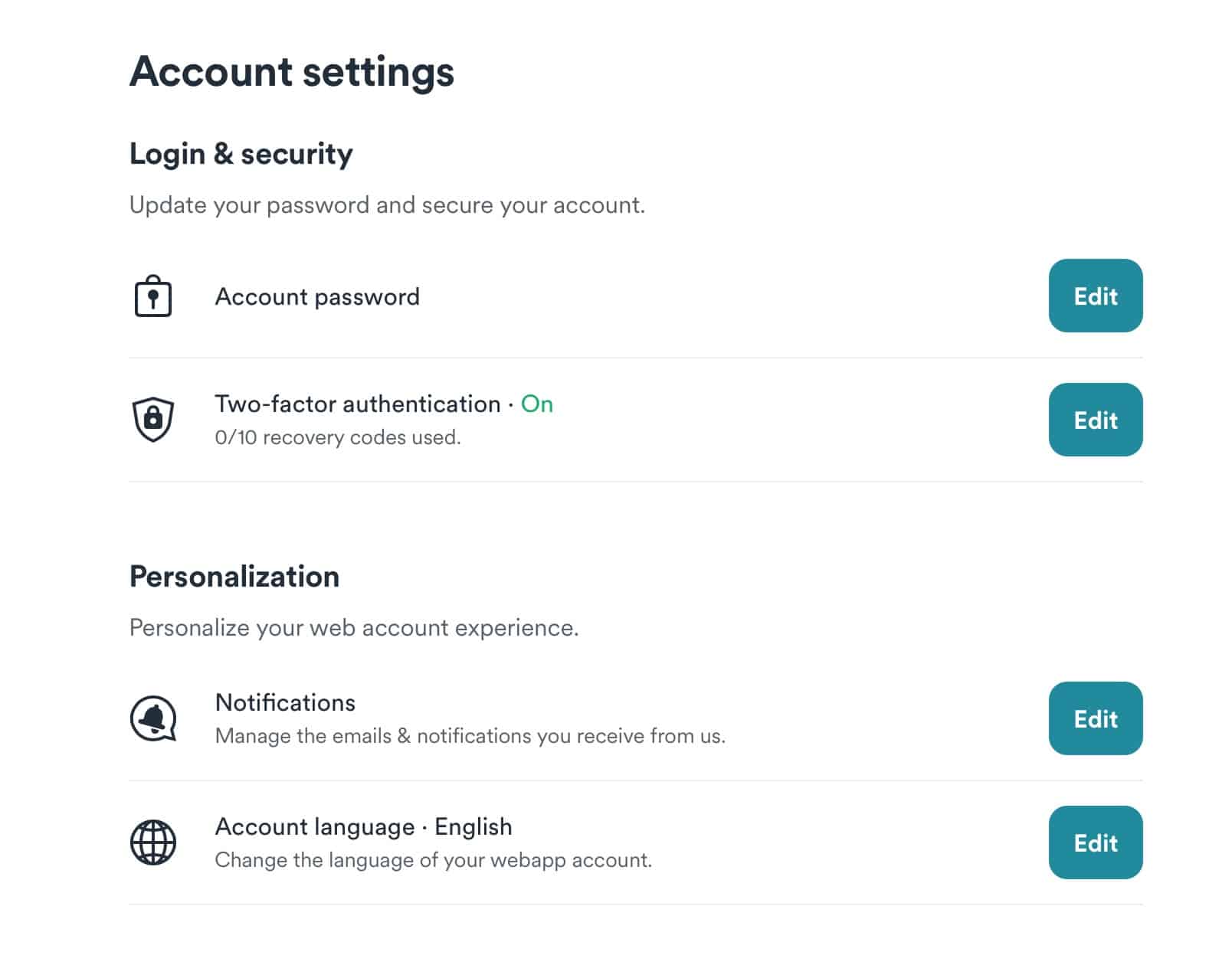 To monitor a credit card, click Scan credit cards, and enter the card number of the account in question.

To monitor National Identification Numbers, click on Scan IDs. You’re prompted to choose the country that emitted the ID to be monitored. Surfshark only supports three countries at this time but states that more countries are coming soon.

The countries currently supported are:

Once you’ve selected your country, you’re prompted to enter the identification number.

The Alert service also has a simple Settings menu that can be accessed from your Surfshark Account page. From there, you can:

All in all, it’s a helpful service, but it may need a bit more time to mature – particularly the Scan IDs feature.

The Search feature, while welcome, is perhaps the least exciting part of what Surfshark One has to offer. It’s not that there’s anything wrong with Surfshark’s search engine, it’s just that there are already several privacy-focused search engines available for free, without a subscription. So I wouldn’t spend money on this feature alone. But within the Surfshark One bundle, it’s nice to have. 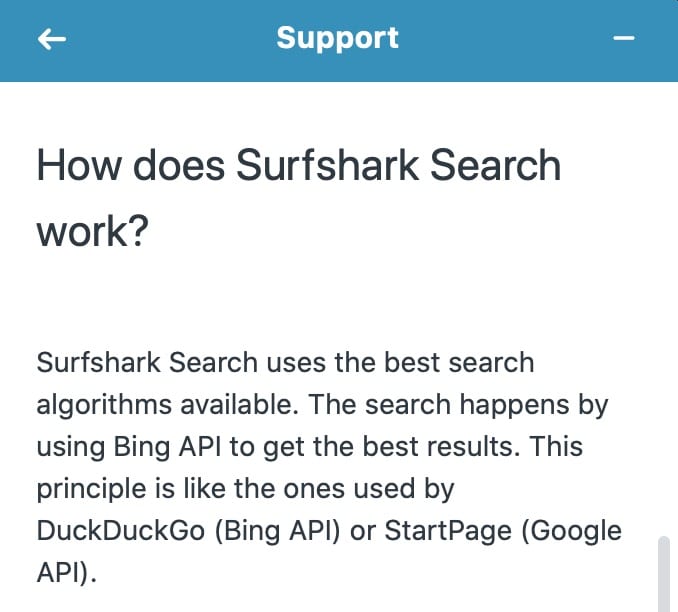 Like Duckduckgo, Surshark’s search uses proxied Bing search results – so the index it uses to crawl the web is Microsoft’s Bing. 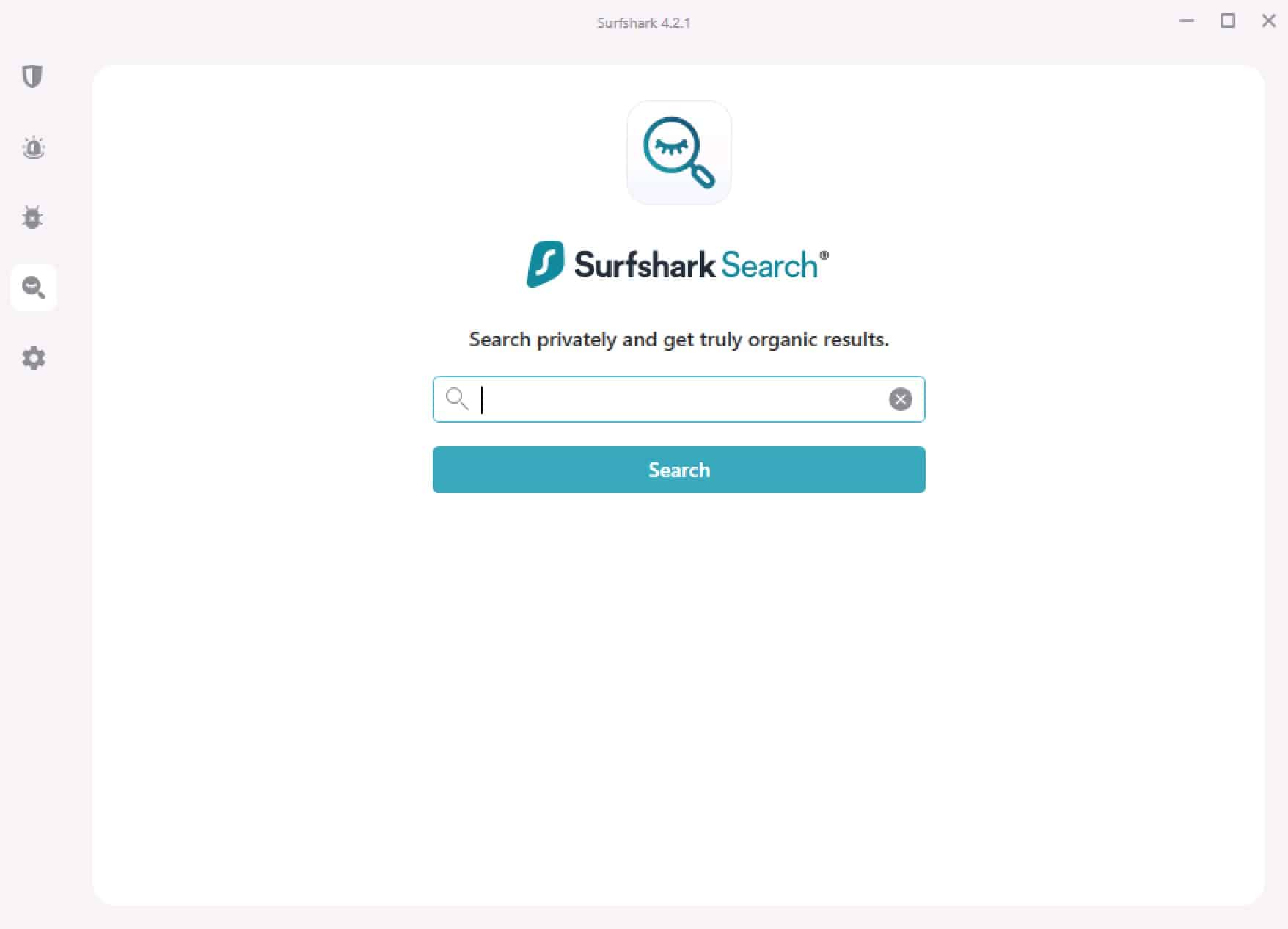 You can access Surfshark’s search from within the app or on your Account page. The search results are displayed in a minimalistic fashion and without any ads. I have to say that its results page is pretty slick. 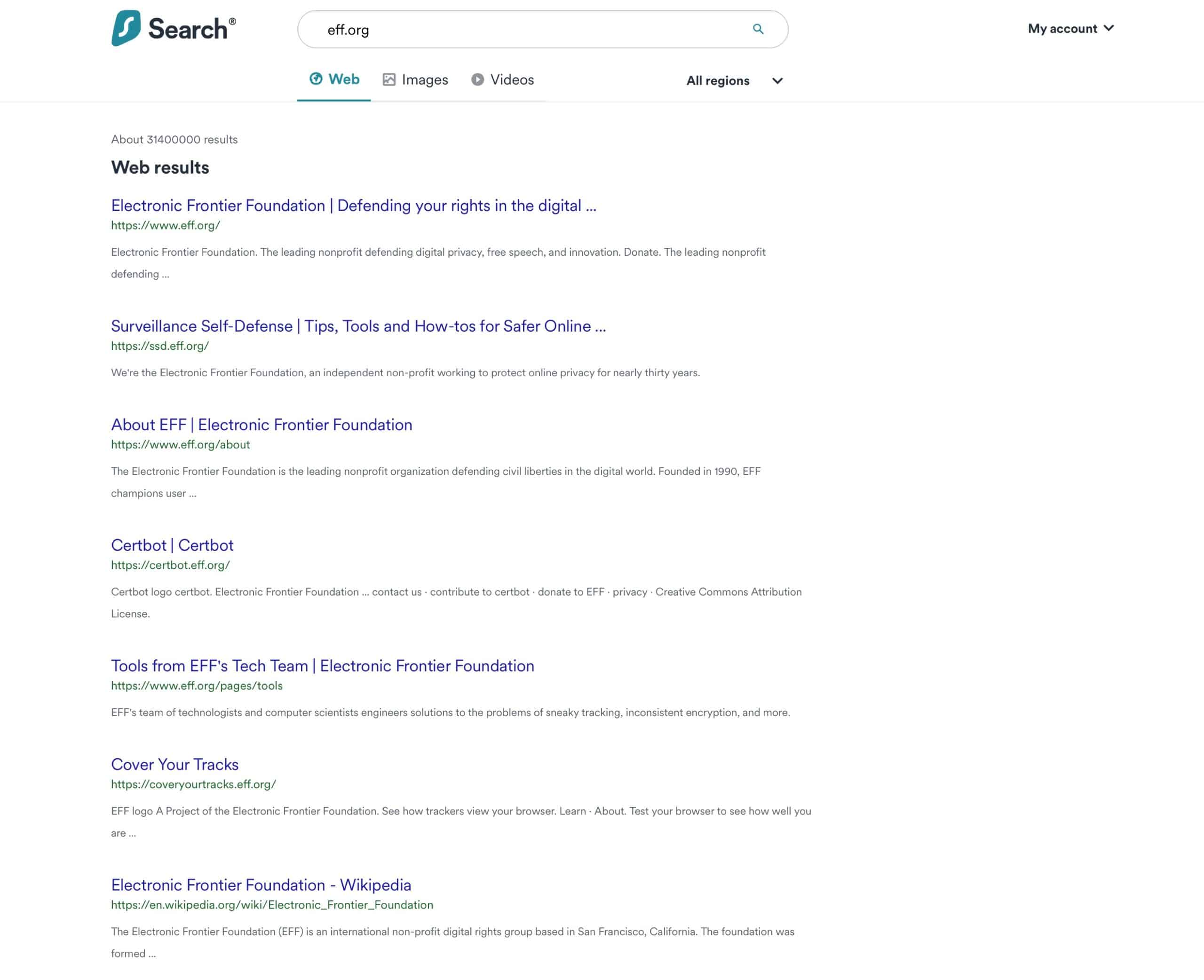 As with other privacy-focused search engines, Surfshark states that it doesn’t collect your searches or profile its users. Overall, it’s a great search engine. 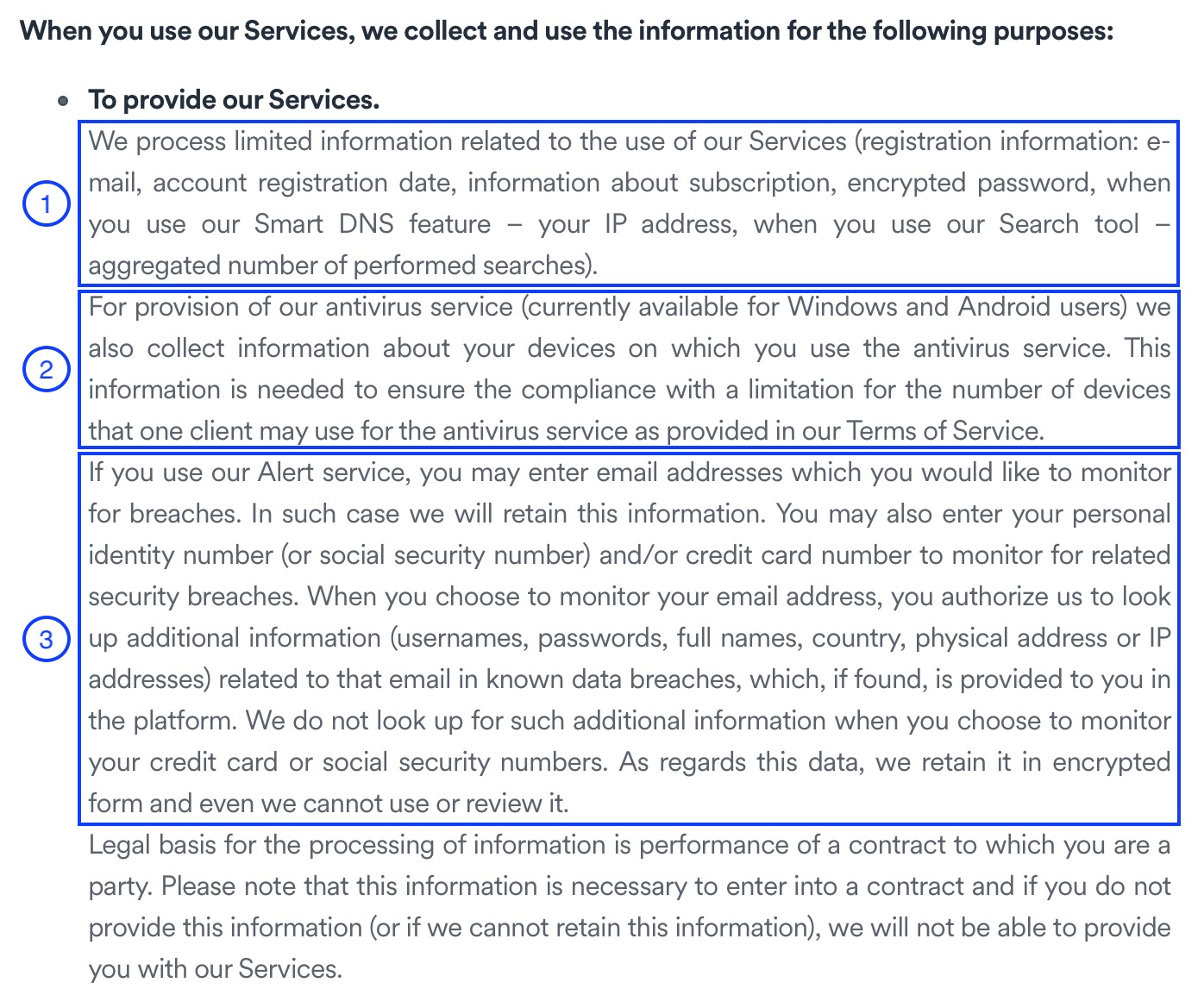 These prices might seem pretty steep at first glance, but when you consider that Surfshark One includes a first-class VPN, an antivirus, a data breach monitoring service, and a privacy-focused search engine, it starts to make a bit more sense.

I’d suggest signing up for a longer-term plan to help cut the cost. After all, the two-year plan comes with an 84 percent discount plus two extra months free, meaning you’re effectively only paying $3.48 monthly instead of more than four times that. .

All subscriptions include a 30-day money-back guarantee. So you may as well purchase a yearly plan to test the service out rather than just buying a month.

Surfshark’s support was reviewed in our Surfshark VPN review. And it’s quite good. It provides 24/7 live chat to its users.

It also provides some comprehensive FAQs concerning its products in its website’s Support section. And it now has a specific Support page for Surfshark One, where you can find answers to the most common questions. 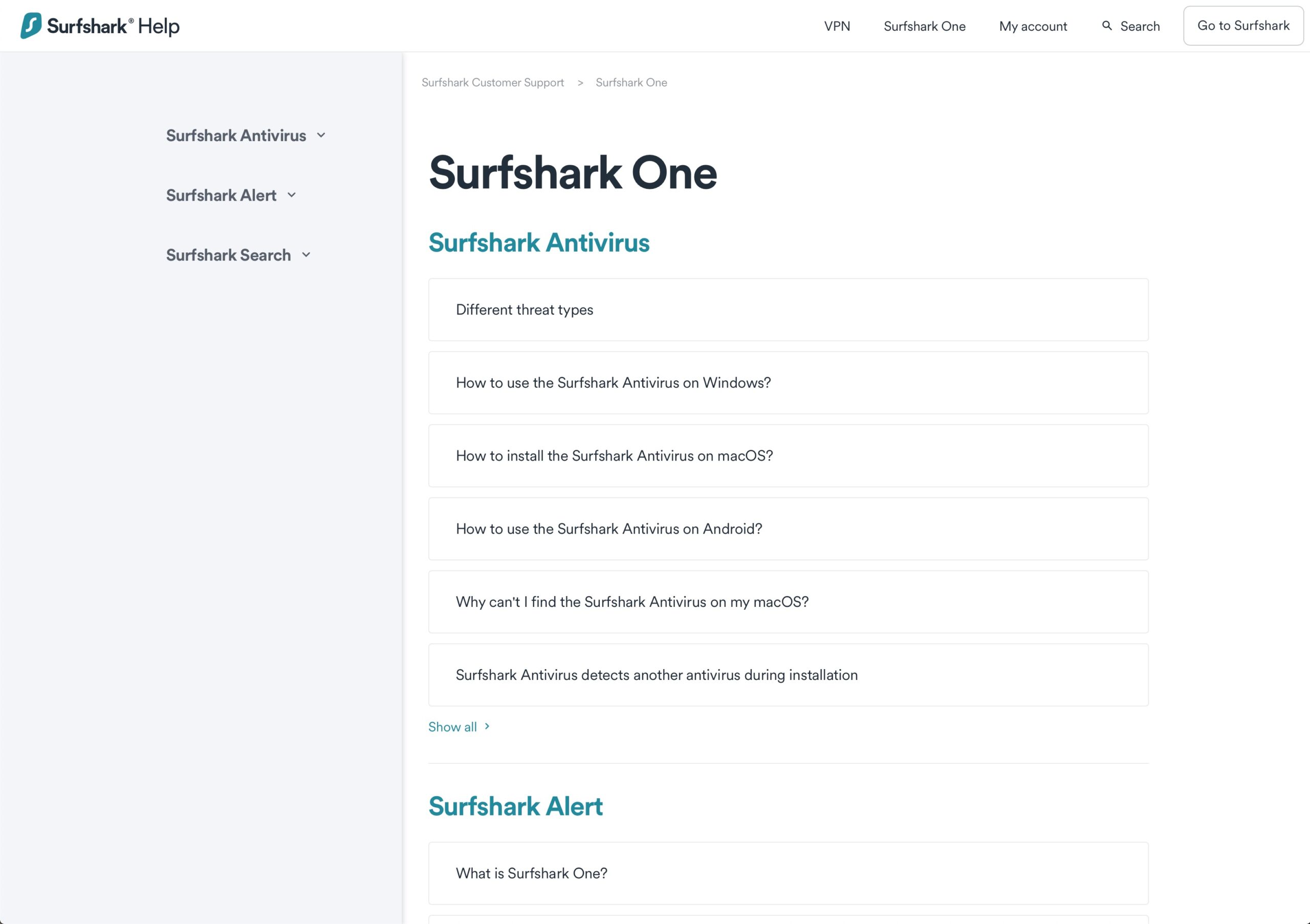 You can always chat with a representative if you can’t find what you’re looking for there.

Do I recommend Surfshark One?

Yes, I do. It’s a great product from a trustworthy, privacy-focused company at a reasonable price (as long as you sign-up for a longer term).

But software bundles being what they are, if you’re already subscribed to a VPN provider (that you like) and happened to be looking for an antivirus, you probably wouldn’t go for a Surfshark One subscription. It’s a hard sell for those in that situation because they don’t want to leave their current provider or because they don’t want to pay for two VPN subscriptions. Although the bundle also gives you a personal data breach monitoring service and the (somewhat less pertinent) private search engine, it would be nice if Surfshark offered standalone subscriptions for its antivirus. Perhaps this will come further down the line.

Another thing to be aware of is that Surfshark’s antivirus offering is still pretty basic. While 99% of users will find everything they need, you may find it somewhat lacking if you’re an advanced user.

Another downside is that Surfshark’s antivirus didn’t detect our malware samples when zipped. In most cases, zipped viruses/malware cannot execute while in the .zip file, so it should be fine in most situations. But Surfshark should really address this in a future update.

Aside from these minor points, Surfshark One is recommended. VPN, antivirus, data breach monitoring, and private search from a company with a brilliant track record on privacy. We like that.