What are CORS attacks and how can you prevent them?

Online attacks are extremely prevalent and can do a lot of damage. In this article, we focus on CORS attacks, how they work and what you can do to avoid them.
Marc Dahan Specialist in online privacy 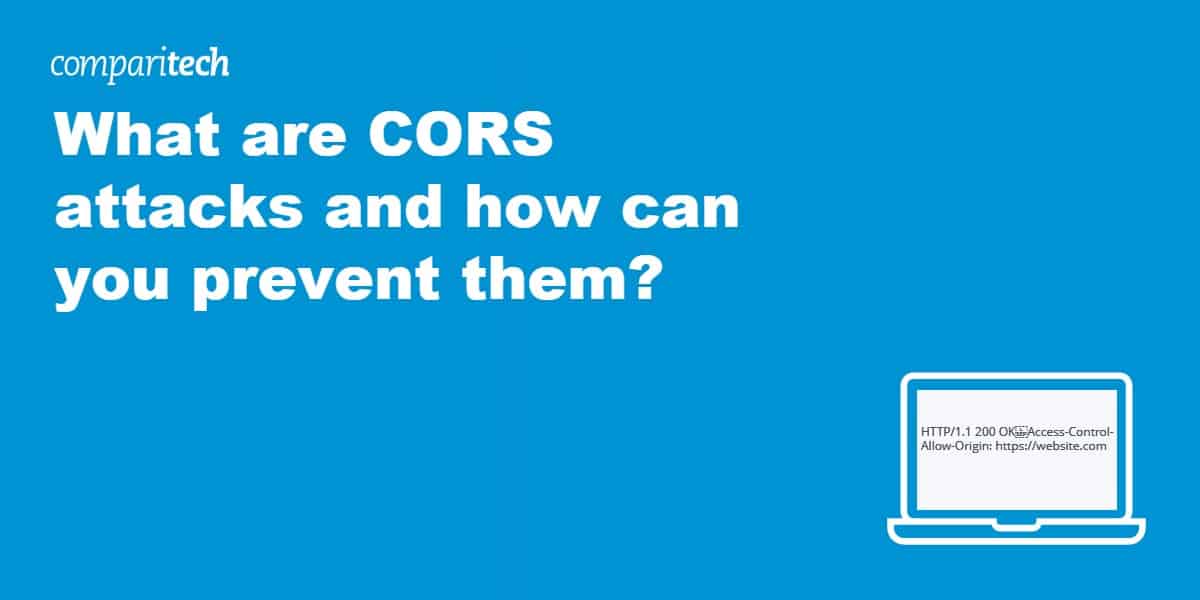 Cross-origin resource sharing (CORS) attacks are made possible through web server misconfigurations. In this article, we’ll look at what CORS attacks are, how they work, and what you can do to avoid them. But before diving into CORS itself, we need to understand a little bit about another important web server security policy: the same-origin policy (SOP).

Most web servers are configured with a same-origin policy (SOP). What SOP does is restrict the origins from which scripts can access other origins. If that last sentence doesn’t make sense to you, don’t worry – it will. Just bear with me here.

An origin consists of:

An origin is simply a specific location on a web server that may be accessed using a URI scheme, domain, and port number. Both the requesting web server and the requested web server have origins.

The same-origin policy is critical because, when a browser makes a request from one origin to another, session cookies could be sent along with the request to generate the response inside the user’s session and provide user-specific and potentially sensitive data. Session cookies are used to keep you logged into a website upon subsequent visits, but could also be used by an attacker to bypass the site’s login process.

You get the picture.

That’s what SOP is, in a nutshell. It works. But it can be somewhat restrictive. After all, today, there are many websites/online services that interact with each other and require cross-origin access.

That’s where CORS comes in.

The CORS protocol works with specific HTTP headers that specify which web origins are trusted and their associated properties, such as whether authenticated access is permitted. These parameters are expressed in HTTP header exchanges between a browser and the cross-origin website it’s attempting to access.

Here’s what a typical header with the origin parameter specified (bolded) looks like:

In the above example, the URI scheme is HTTPS, the domain is foo.example, and the port number is 443 (as implied by HTTPS).

When this header is transmitted to the website, the website will have to make a call on whether or not to allow the cross-origin request. Whether or not the request will be granted depends on the receiving website’s CORS configuration. And it’s this configuration that opens the door to CORS attacks.

If CORS is misconfigured on the web server and ‘foo.example’ is a malicious site, it will accept the request and can fall victim to a CORS attack. But that’s just half the story.

It’s half the story because there are two main types of CORS misconfigurations that can render a web server vulnerable to CORS attacks – and you need both to pull it off.

Both of these parameters work in tandem within the web server’s CORS configuration.

They boil down to two questions the web server must answer:

Let’s look at the different ways web servers can configure their Access-Control-Allow-Origin policy:

This allows access from all origins. As soon as a cross-origin request is received, it will be allowed. The response header would look like this:

This is referred to as origin reflection because the web server simply “reflects” the origin found in the request header into the response header. The web server is using a wildcard (*) to accept all cross-origin requests.

Note that this isn’t necessarily disastrous from a security perspective. This configuration is used by many public websites or API endpoints that are meant to be publicly accessible.

Setting the ACAO policy to allow subdomains will allow cross-origin requests from any subdomains of the defined domain. If a valid request comes through, it will be allowed. The response header would look like this:

Setting your ACAO policy to accept pre or post wildcard requests from a given domain would accept cross-origin requests from evilwebsite.com or website.com.evilsite.com. The response headers would look something like this:

Many development languages represent non-existent headers with the “null” value. Setting your ACAO policy to null means that the web server will accept cross-origin requests from the “null” origin. This is often deployed in internal web development environments (intranet). The response header would look like this:

Now let’s take a look at the Access-Control-Allow-Credentials policy.

The Access-Control-Allow-Credentials policy is set with a value of true or false. And it’s really this setting that, when set to “true,” enables most CORS attacks. The response header would look like this:

The state of the Web

An unofficial study conducted in June 2020 found that from the Alexa top 1 Million websites, only 3% (29,514) of websites supported CORS on their main page.

As we mentioned above, in order to be able to pull off a CORS attack, the Access-Control-Allow-Credentials policy must be set to “true.” Looking at sites that support both the ACAO and the ACAC, the same study found that close to half of them had CORS misconfigurations that a malevolent actor could exploit.

How to prevent CORS-based attacks

It’s primarily web server misconfigurations that enable CORS vulnerabilities. The solution is to prevent the vulnerabilities from arising in the first place by properly configuring your web server’s CORS policies. Here are a few simple tips on preventing CORS attacks.

If a web resource contains sensitive information, the allowed origin(s) should be specified in full in the Access-Control-Allow-Origin header (i.e., no wildcards).

While this one may seem obvious, especially given the previous tip, but origins specified in the Access-Control-Allow-Origin header should exclusively be trusted sites. What I mean to convey that you should avoid dynamically reflecting origins from cross-domain request headers without validation unless the website is a public site that doesn’t require any kind of authentication for access, such as an API endpoint.

Don’t think that properly configuring your CORS headers is enough to secure your web server. It’s one of the pieces, but it isn’t comprehensive. CORS defines browser behaviors and is never a replacement for server-side protection of sensitive data. You should continue protecting sensitive data, such as authentication and session management, in addition to properly configured CORS.

As a user, you basically want to be one step ahead of phishing scams and malicious websites and downloads to minimize your chances of falling victim to a CORS attack. The following common-sense tips can help.

These steps are similar for many online attacks such as avoiding fake antivirus so they are generally good practices to follow.