Think you know the state of Japan's cybersecurity efforts? Read on to find some interesting and shocking Japan cybersecurity statistics.
Craig McCart 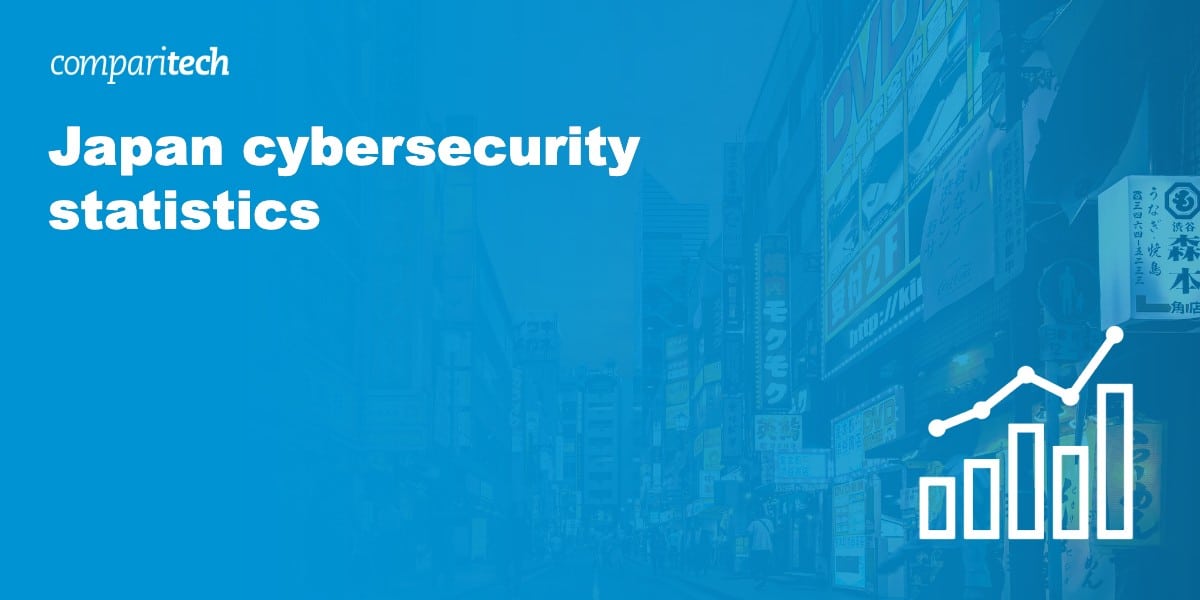 In recent years, Japan has struggled with several high-profile cybersecurity incidents. From the 2017 WannaCry ransomware attack to the 2018 hack of the Japanese cryptocurrency exchange Coincheck, it’s clear that the country’s digital defenses are far from impenetrable.

But just how big is the problem? In this post, we’ll look at several statistics relating to Japan and cybersecurity drawn from various reputable sources. These numbers will help give you a better understanding of cybersecurity in Japan and the challenges that lie ahead.

Japan was one of the countries most affected by the WannaCry ransomware attack in 2017, with over 600 organizations hit by the malware (Source: The Guardian)

In 2018, Japanese cryptocurrency exchange Coincheck lost $534m worth of NEM tokens to hackers (Source: The Independent)

The same year, another Japanese cryptocurrency exchange, Zaif, lost $60m worth of cryptocurrencies in a hack (Source: Coindesk)

In 2021, there were 429 breaches of Japan’s act on prohibited computer access, resulting in 235 suspects being prosecuted. (Source: Statista)

Japan saw a massive spike in ransomware attacks during the first half of 2022, with a total of 114 attacks confirmed. 59 of the attacks targeted SMEs, while 36 affected large corporations. (Source: Japan Times).

The average cost of a data breach for a Japanese company was $2.7 million in 2020. For comparison, the average cost in 2019 was $2 million, according to IBM’s “Cost of a Data Breach Report” ( Source: IBM)

It took an average of 197 days to identify and contain a data breach in 2020, up from 190 days in 2019 – again, according to IBM’s “Cost of a Data Breach Report.” This may be due to attacks becoming more sophisticated versus the skill level of cybersecurity professionals equipped to deal with them. ( Source: IBM )

A national police agency survey showed that cybercrime grew in Japan in 2020, with 8,875 recorded attacks. Attacks were up by 356 from the previous year. (Source: Nippon).

10. 98.1% of businesses in Japan use cybersecurity measures 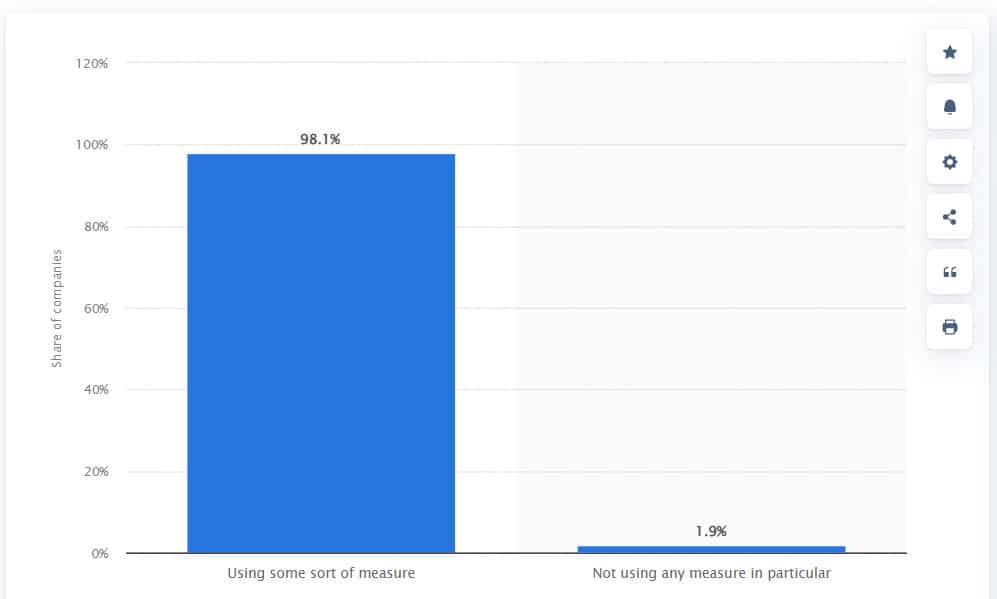 During an alcohol-fuelled night, a contractor misplaced a USB dongle with the personal details of almost half a million Japanese residents. Names, addresses, dates of birth, and tax ID numbers were contained on the drive. (Source: The Guardian)

In October 2022, Shangri-La Group, a popular Japanese hotel chain, suffered an attack that allowed hackers to obtain details on guests staying with the hotel. Data included passport numbers, dates of birth, and credit card details. The attacks were discovered after the hacking group bypassed security monitoring systems. (Source: The Register)

Child pornography and prostitution numbers climbed above 2000 cases in 2021, with similar cases reported in the previous year. (Source: Statista) 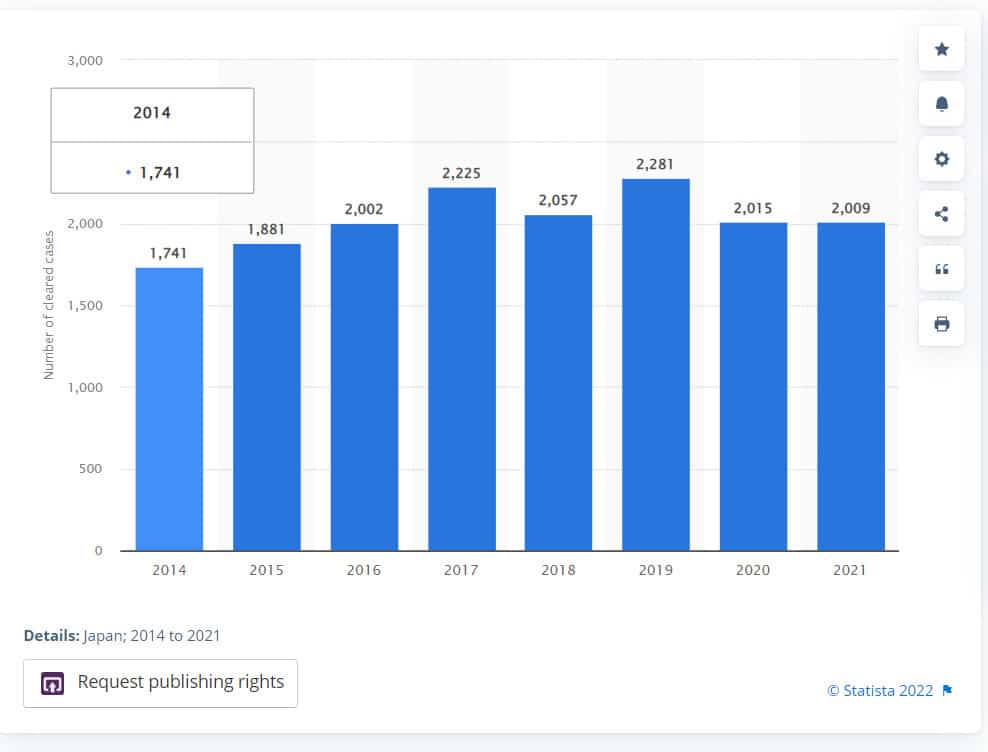 How to stay safe online in Japan

Staying safe online in Japan is vital due to its high level of technology and the need for personal information.

Here’s how to stay safe online in Japan:

By following these tips, you can stay safe and secure when browsing the internet in Japan. If there are any suspicious activities on your computer, then contact your local police station immediately.

What are the most common types of cybercrime in Japan?

The most common types of cybercrime in Japan include phishing, fraud, identity theft, and financial crimes. Phishing attempts involve sending fraudulent emails or messages through social media to try and lure victims into providing sensitive information such as passwords or bank details. Fraud cases usually involve deceiving someone into revealing personal data or making purchases with stolen credit cards. Identity theft involves the unauthorized use of someone’s personal data to access their accounts, while financial crimes can include wire fraud, money laundering, and cyber extortion.

Other types of cybercrime in Japan include malicious software (malware) attacks, denial of service (DoS) attacks, and website defacement. Malware is malicious code designed to damage computer systems or steal data, while DoS attacks involve flooding a network with traffic to prevent users from accessing the system or services. Finally, website defacement involves hackers changing the content of a website to cause disruption or spread a message.

Japan has created laws and regulations to combat cybercrime, including the Unauthorized Computer Access Law, which criminalizes malicious software and other forms of cybercrime. The government also works closely with the private sector to promote cyber security awareness and protect businesses from online threats. However, businesses and citizens need to be aware of these risks and take steps to protect themselves from being victims of cybercrime.

In addition, it is essential to keep computer systems and networks up-to-date with the latest security patches, use strong passwords and be mindful of clicking on suspicious links. Furthermore, educating yourself about the various types of cybercrime in Japan and taking proactive measures can reduce the risk of becoming a victim.