Malvertising, a form of malware injected into web and app advertisements is on the rise. Join us as we deep dive into some of the most recent malvertising trends, how malvertising works, and more.
Craig McCart 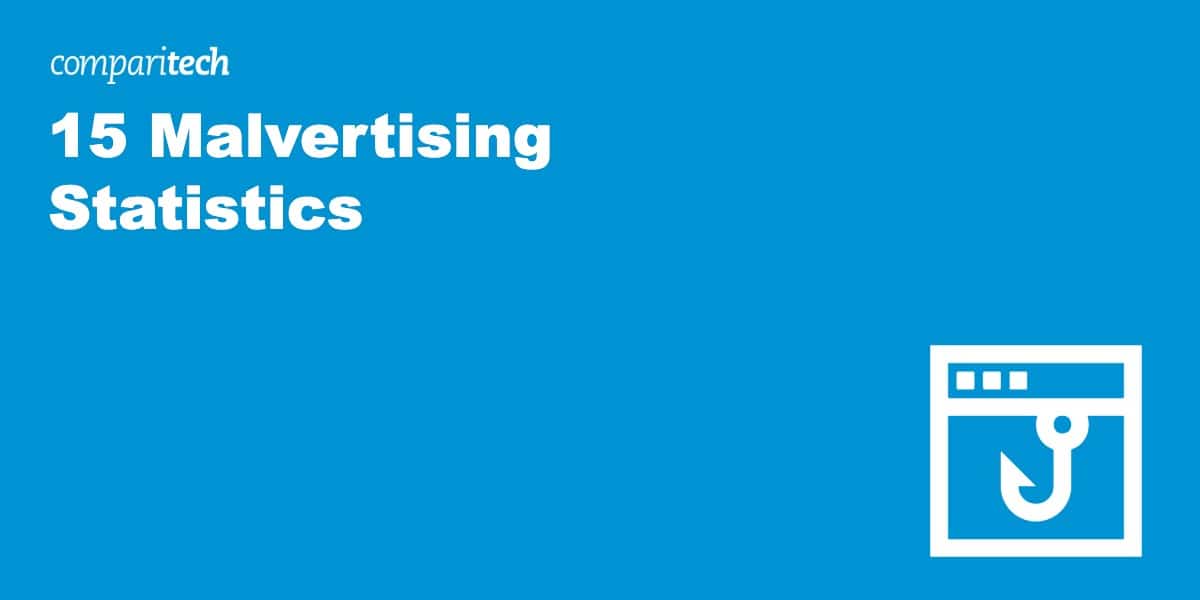 Malvertising is a method cybercriminals utilize to perform espionage, make money, or steal user data. In this article, we’ll take a deeper dive into how malvertising attacks are performed and the consequences for the end-user. We’ll then discuss some key statistics of how cybercriminals utilize these types of attacks. After consuming the information in this article, we hope to open your eyes to the associated malvertising threats and help you avoid falling victim to such an attack.

Malvertising (or malicious advertising) often involves an attacker paying for or hacking into a display ad campaign. Cybercriminals host malicious ads on an infected website, and these ads typically contain some form of malicious code. Due to the techniques used, unsuspecting users may not necessarily need to click the ad to fall victim to a malware infection.

As users surf the web and visit sites with ads that are infected with malware, they may unknowingly download malware onto their device. Other tactics involve sneaky prompts as a way of getting the user to click the ad.

Attacks can vary between cybercriminals, with some downloading an infected file to your device. In contrast, others pass you through a series of website redirects to get the malicious code where the attacker wants it to be.

1. Malvertising attacks have risen since the pandemic

Clean.io’s Q3 2020 Malvertising Statistics report shows that although malvertising attacks dropped in Q2 2020, they have been 72% higher on average since the COVID 19 pandemic began. 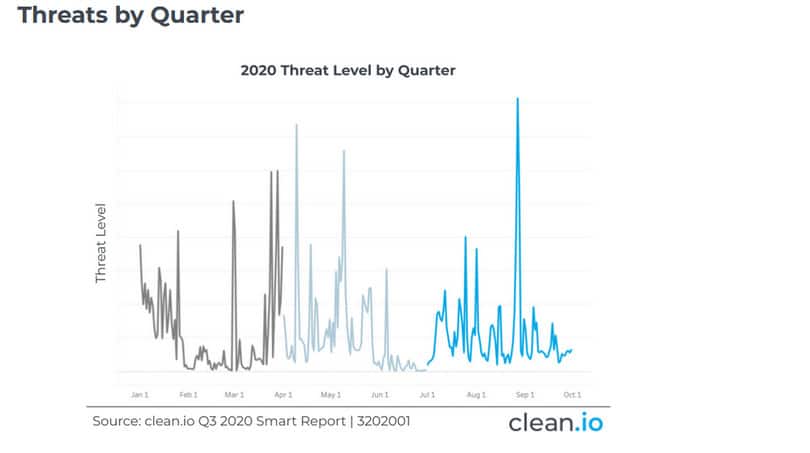 A 2019 digital ad fraud report from eMarketer estimates that Malvertising costs are from $6.5 billion and as high as $19 billion, pointing to the difficulty in calculating the actual range of malvertising.

3. Device farming is the most prevelant for shopping app fraud

According to ad fraud research carried out by the Interceptd, 30% of app fraud in the shopping category is performed using device farming. This is closely followed by app fraud performed using bots and emulators.

4. Malvertising costs could skyrocket by 2025

Cyber Security Ventures 2019 cybercrime report estimates damages caused by cybercrimes such as malvertising are forecast to cost the world $10.5 trillion by the end of 2025.

A report by Digital Citizens Alliance on advertiser-supported piracy found that piracy sites make $1.3 billion due to malvertising.

6. Malicious code ad injection is on the rise

Security Gladiators reports that on average, of every 100 ads that are published, at least 1 contains malicious code.

Whether intentional or due to human error, employees remain the root cause of successful cyber security attacks, Accenture’s 2019 the cost of security report shows.

8. The most popular malvertising exploit is the Angler Exploit Kit

As reported by CI Security, The Angler Exploit kit uses several advanced evasion techniques to ensure it remains undetected by malware scanners on a campaign level and always-on software that searches for infections. For this reason, it has become one of the most popular malvertising exploits used in 2021.

A gift card scam was used to hijack 300 million iPhone browser sessions in 2018. This shows how malvertising attacks are becoming more sophisticated.

A report by Confiant found that in Q3 of  2021, 1 of every 108 ad impressions was highly disruptive or dangerous.

Clean.io reported that malvertising attacks were choppy throughout 2020, but they saw spikes on holidays like Labor Day and the 4th of July.

Clean.io’s Q3 2020 malvertising statistics report showed that the highest type of attack on mobile web was related to clickjacking. It was closely followed by “other redirects” attack types.

13. Other redirects were the highest reported desktop malvertising attack type

In contrast, Clean.io found that the most significant attack type on desktop came from “other redirects.” Client-side injection came second. 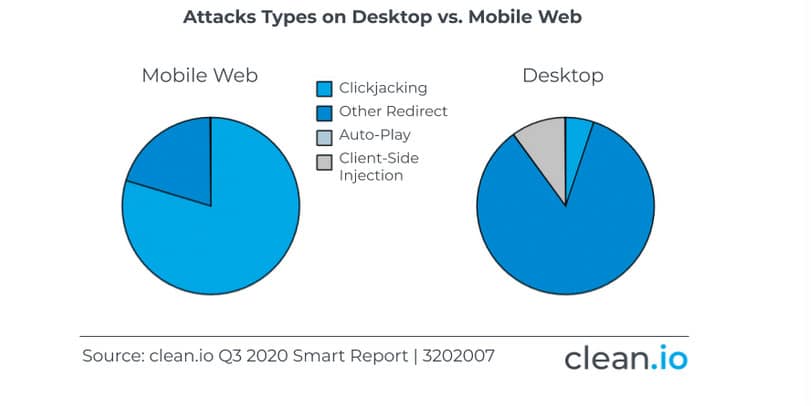 15. Cybercriminals are motivated by financial gain

The report continued, showing that 76% of attackers are motivated by the ability to obtain cash from victims of crimes such as malvertising.

How Malvertising Is Distributed

Malicious adverts can be displayed in several ways before infecting an unsuspecting user. These include the following:

How to Avoid a Malvertising Attack

Malvertising attacks are changing the landscape for cybercriminals, as an attack may not require any user input whatsoever. Just visiting a website infected with malicious ads is often enough to infect an end-user. Unfortunately, unlike malware that can be defended against using anti-malware software and other prevention methods, malvertising includes the ad network, the publisher, and end-users seeing the display ads.

At a base level, ad networks should scan ads before passing them through the network to the website hosting the ad. If malicious code is detected, the ad network should prevent the advertisement from continuing through to the publishing stages of the campaign.

Ad networks can scan ads before running them to look for specific behavioral patterns typically seen with malware variants and can also check the database signatures for malware.

Whether the ad is being hosted on Google, Facebook (which have their own ad networks), or a blog, these are known as the ad publishers, and it is up to the host to display the ad, which will then appear to visitors.

For example, a site owner hosting a blog might set up an ad on an ad network which would then produce a string of code to place in the appropriate place of the website. Before putting this code on the site, some tools can scan the ads to check whether it’s been compromised before publishing them on a live site.

Although falling victim to a malvertising attack is incredibly easy, there are some ways you can give yourself a better chance of avoiding getting infected.

Malware scanning tools included with software such as NordVPN‘s CyberSec feature scan websites for malicious code and warn you when you are about to enter an unsafe website. Although it’s not guaranteed to detect a malvertising attempt, there’s a chance it’ll identify something.

If you get infected due to a malvertising attack, you can prevent harm by using desktop malware protection to detect and remove the infection. Although you can use an antivirus, we’d recommend keeping antivirus running in the background on your device to check for real-time infections constantly.

An additional option is to install ad-blocking software for your browser. We’d recommend Total AdBlock, which will continuously scan for advertisements as you browse the web, blocking any pop-ups, video, or banner ads along the way. If the adblocker detects ads (infected ads or legit versions of them), it’ll attempt to stop them from appearing. Even if you visit a compromised website, there’s a chance (although not guaranteed) that the adblocker will block the ad to prevent infection.