What is RFID blocking?

Heard of RFID blocking but not sure what it means? In this post, we explain everything there is to know about RFID blocking and whether you really need it.
Mark Gill TECH JOURNALIST, VPN AND PRIVACY SPECIALIST 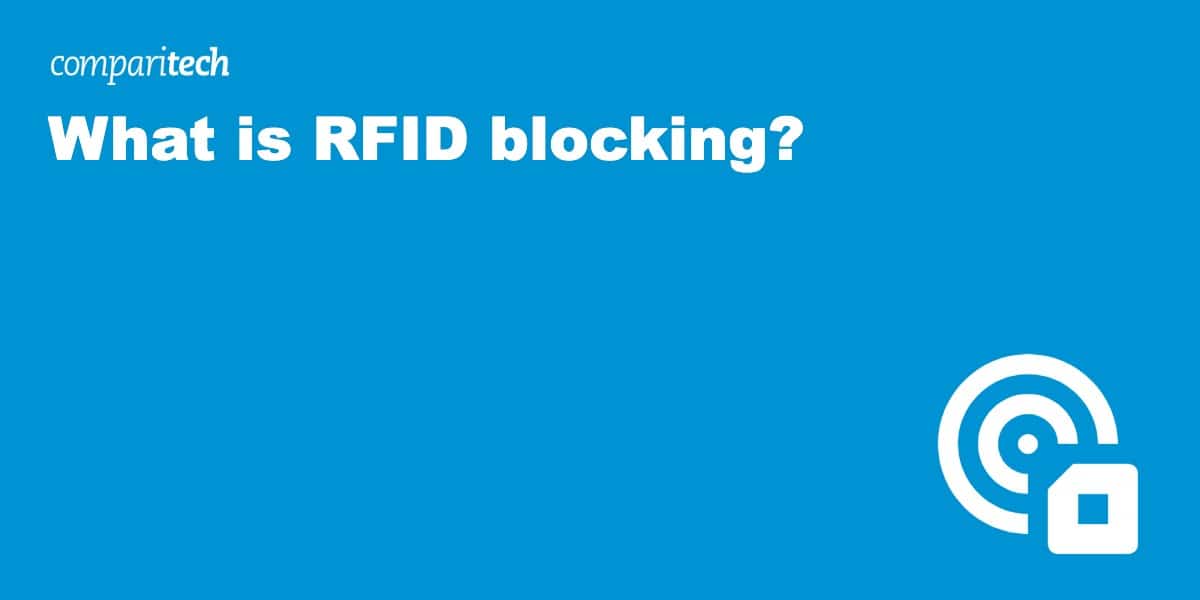 Chances are that if you’ve heard the term RFID blocking, it’s usually in relation to a wallet. RFID-blocking wallets are growing in popularity, as are various other RFID-blocking products such as passport covers. But what does RFID blocking mean? Before we go into this, we should first briefly explain RFID and what it’s used for.

What does RFID mean?

First, it’s important to know that RFID stands for “Radio Frequency Identification” (RFID). This wireless technology uses radio waves to identify and track tags attached to objects and, by extension, people. While this might sound somewhat sinister, RFID technology has its uses. Indeed, many of us use it on a daily basis when making contactless payments with our credit cards.

How does RFID work?

An RFID system is composed of three key components: an antenna, a transceiver, and a transponder. It’s through the combination of the antenna and transceiver that you get an RFID reader. This network-connected device may be fixed such as in the case of an airport passport reader. Otherwise, it can be mobile like the handheld credit card readers we encounter when paying in restaurants and stores.

An RFID reader uses radio waves to transmit signals and activate the RFID tag (the transponder). This tag may be located on your credit card, passport, or a key card. When an RFID tag is activated by an RFID reader, the tag sends a wave back to the antenna so that the RFID reader can receive its data. Of course, there’s likely to be an action as a result of this process — a payment processing or a door unlocking, for example.

What’s the difference between RFID and NFC?

If you’ve heard of RFID, you may have also heard of NFC. While RFID refers to radio frequency identification, NFC stands for “Near Field Communication”. While RFID and NFC share the same technology, they’re on different frequencies. Another difference is that while RFID is one-way communication, NFC is two-way because NFC devices can act as both a reader and a tag.

For example, an increasing number of smartphones have NFC technology. It’s possible to transfer data between devices just by tapping them together. Short read range limitations dictate that the devices must be in very close proximity to achieve this. While RFID has a much longer range of several meters, NFC is just one to 10 centimeters. Aside from information sharing between phones, NFC technology is used for contactless payments.

How am I using RFID day-to-day?

RFID technology has become ingrained in our lives. In fact, there’s a chance you engage with RFID technology on a daily basis. For example, let’s say you’re going to work and take public transport, be it the train or bus. You may well use a travel card which you have to scan on a reader (such as the Oyster card in London). That’s RFID.

Even if you take the car to work, you’re probably still engaging with RFID. When you press the car key fob, the doors are remotely locked or unlocked. That’s because the fob has an RFID chip inside it. This is known as an active RFID system because the fob button actively sends out the signal as opposed to receiving it. When you’re inside your car, the keyless ignition is a passive RFID system because the ignition chip receives the signal from the car.

During your drive to work, you may find yourself going through tolls. Some of these tolls are RFID tolling systems which allow you to drive through without stopping thanks to an RFID tag on the vehicle. Even when you arrive at work, you may need to use a key card to access the premises. And when on your lunch break and buying lunch, you might make a contactless payment using your credit card.

All of these are common examples of RFID that many of us interact with each day.

What are some RFID uses?

Aside from the above everyday examples, here are a few other use RFID uses:

Needless to say, RFID technology has many uses. As with many other technologies, it’s there to make our lives easier. However, that isn’t to say that it doesn’t have its critics. After all, there’s a reason why the term “RFID blocking” exists.

Do Apple AirTags use RFID?

No, Apple AirTags don’t use RFID. They use Bluetooth and ultra-wideband (UWB) technology. This sends a stronger signal than the RFID chip on your credit card. RFID blockers aren’t designed to stop UWB signals and don’t interfere with Bluetooth. So while an AirTag’s signal strength may be somewhat weaker when inside an RFID blocking wallet (reducing the connection range), the AirTag will still work.

What is RFID blocking?

RFID readers can read information contained on wireless devices (tags) without physical contact. Furthermore, there doesn’t even need to be a line of sight for this to be achieved (although it does require close proximity).

However, RFID blocking involves cutting off the electromagnetic signal emitted from a transceiver. An example of this is with an RFID blocking wallet that contains a carbon fiber or aluminum layer. This creates what is known as a Faraday cage — an enclosure used to block electromagnetic fields.

Are there any differences in RFID and NFC blocking?

There’s no real difference between RFID and NFC blocking because they use the same technology, albeit NFC operates on a reduced range. Aluminum foil around a phone would block both RFID and NFC. The reason that this works is that aluminum is a conductor of electricity. It’s able to reflect or otherwise absorb the radio waves, preventing RFID and NFC from functioning effectively.

Why would I need RFID blocking?

While RFID technology has its uses, particularly in our everyday lives when it comes to quick and easy contactless payments, some security concerns have been raised. One such concern is RFID skimming which is when an RFID reading device unlawfully scans our credit card or passport in order to steal information that can be used for fraudulent transactions or identity theft.

RFID skimming is achieved by the thief simply being in close physical proximity to the victim’s card. However, there have been instances of devices being illegally installed on ATMs and fuel pumps, removing the requirement for the thief to be within near-touching distance. These devices are becoming increasingly sophisticated and can be quite difficult to spot as a result.

Do I need RFID blocking?

While RFID blocking products can work, it’s fair to say they’re not all that necessary. RFID skimming isn’t common or practical because thieves typically have to be in very close proximity to a card. Furthermore, contactless card payments are capped, which makes this a high-risk but relatively-low reward crime.

Most information available via RFID is encrypted. While it doesn’t hurt to have an RFID blocking wallet or passport cover for peace of mind, the fact is that a layer of aluminum foil from your kitchen would be just as effective (albeit perhaps not as stylish!).