The top 50 most surveilled colleges in the United States 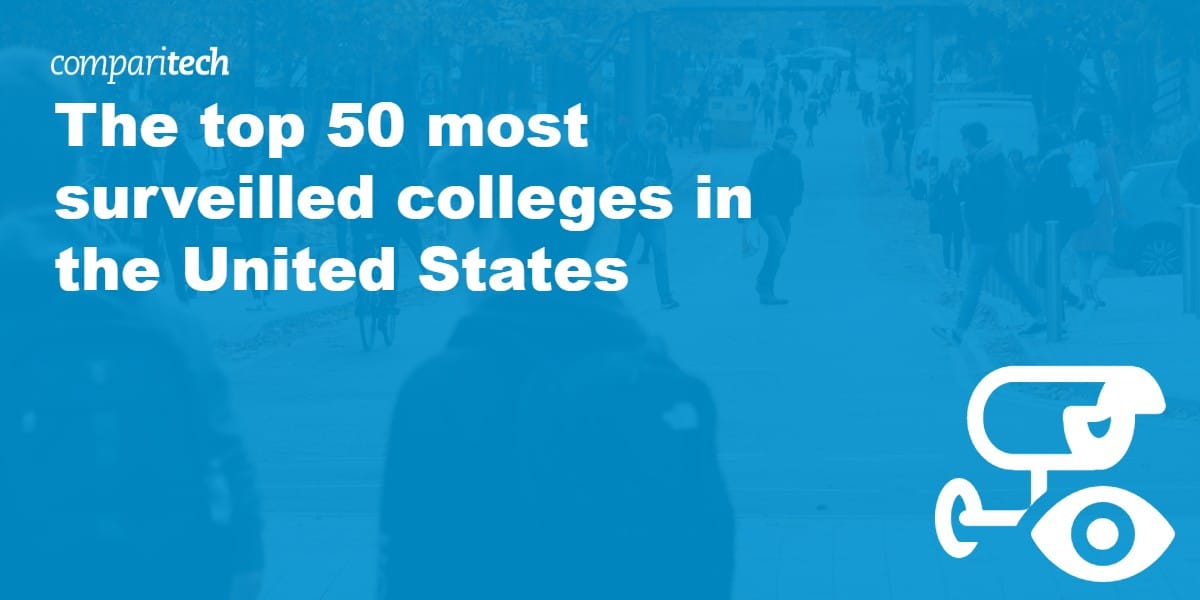 University law enforcement agencies across the US are implementing security cameras in the thousands around campuses. What’s more, surveillance technologies are becoming more advanced and potentially more invasive to students’ privacy.

A range of extensive surveillance technologies are used to monitor students’ whereabouts and activity. From drones, license plate cameras, and even attendance tracking apps that use Bluetooth, students across the US are being tracked and traced more now than ever before.

While many people claim these measures are necessary to crack down on malicious crimes, such as severe school shootings, as well as other minor crimes such as burglary and motor vehicle theft, others are protesting and even creating petitions online to stop their use.

To find out just how extensive student surveillance is, we have found out which universities host the largest number of security cameras on their campuses and what other surveillance tech is in place.

The 10 most surveilled colleges in the US

Based on the number of CCTV cameras found on campus per 1,000 students, these universities are the top 10 most surveilled in the US: 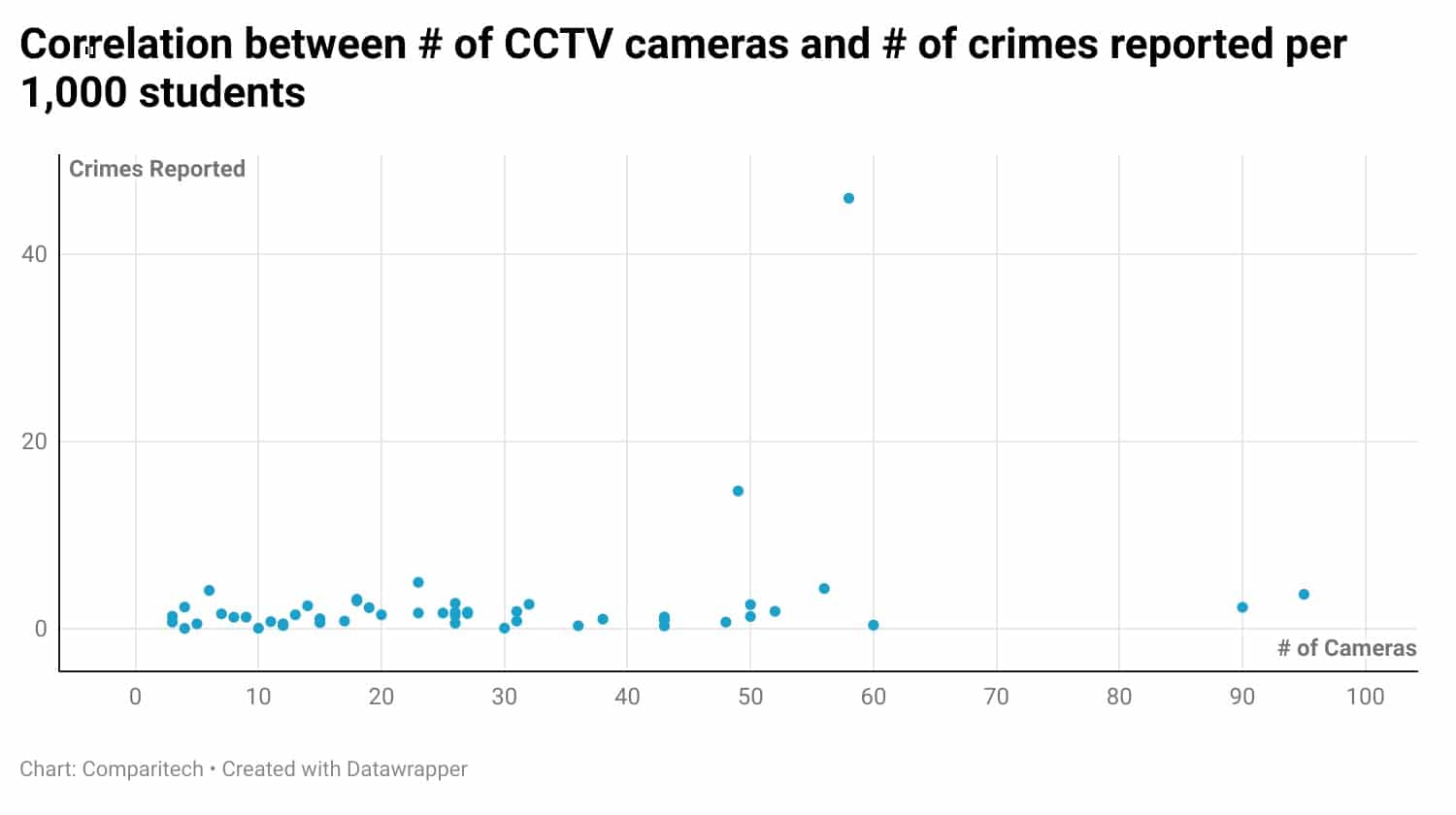 As you can see from the above chart, there is barely a correlation between crimes reported and the number of security cameras in place. Crime data comes from the US Department of education.

Surveillance technology in use across US college campuses

As well as CCTV cameras, many US colleges utilize other surveillance technology, some of which are arguably more invasive than CCTV cameras that are positioned in strategic areas, e.g. those with high footfall.

The below map highlights what’s in use where – select each technology in the key to see which university is using it.

Drones are often used by university police departments for search and rescue missions, surveillance of large-scale events, and campus escorting.

For example, George Mason University has a special response team of specially trained officers who have access to a drone for both search and rescue as well as to investigate dangerous situations within large facilities. Meanwhile, Pennsylvania State University gained the necessary permissions needed to fly a drone over its universities football game, so as to offer safety to the public during the event.

The University of Southern California deactivated fingerprint scanners that were used to access residential halls, and instead added facial recognition technology to help limit the spread of COVID-19. Even though the university claims data is not stored, the software’s product description says the device can store up to 1 million identity templates. Experts suggest that in order for the technology to work, the system must store some data.

Accessing a vast database is something the University of South Florida Police Department is doing. It is one of the many law enforcement agencies that use the Face Analysis Comparison & Examination System (FACES). This enables police to upload a mugshot and compare it with the data of 25 million Florida driver’s license photos.

Use of this technology is not without its problems or controversies, however. A student at the University of Texas, Arlington, was wrongfully accused of cheating in an exam after the university used facial recognition technology to monitor remote learning. It was found that the software failed to recognize individuals with darker skin, resulting in the false accusation.

35 out of the 50 universities we researched are using police body-worn cameras in some way, which includes pilot programs and some pending usage. Purdue University, Rutgers University, and Pennsylvania State University were found to have the highest number of body-worn cameras accessible to on-campus police officers. 200, 180, and 150 cameras are in use on each campus respectively.

When introducing the technology, Purdue University’s chief of police suggested it would help with community policing, providing “transparency” to investigations. However, less than a year later, in February 2022, the technology hit the headlines for all the wrong reasons when body-cam footage went viral after a student was arrested and could be heard saying repeatedly, “You’re choking me!”

There is also an element of mistrust in the police’s use of these cameras, particularly following the recent murder of George Floyd. Discussing the addition of body-cams at the University of California, Los Angeles, student Naomi Riley said she believed that body cameras are not enough to hold police officers accountable. Fellow student, Andrew Guerrero, also added that recorded footage may not be objective because it is the police who are in control of managing, handling and securing records.

32 institutions are using license plate readers to monitor traffic and parking facilities on campus, with many using it to provide virtual permitting. California State University, Long Beach, for example, boasts that the benefits of its use include increased sustainability, remote payments, and convenience.

However, some universities utilize the technology to conduct further surveillance techniques. The University of Florida has implemented 16 LPRs on campus to enhance safety and security, with the cameras capturing car tag numbers and running them through the national and state systems that notify law enforcement of stolen and wanted cars.

The technology also arguably provides police departments with continued monitoring of who is entering and leaving the campus and when. That could have a chilling effect on students’ and staff’s freedom of movement.

Within our top 50 universities, only one–the University of South Carolina, Columbia–expresses the potential use of video analytics, but many other universities across the US are considering implementing the technology. Video analytics use an algorithm to enable constant surveillance, tracking people and/or objects across the camera network while looking for any distinct patterns or irregularities.

The University of South Carolina, Columbia, claims in their Alarm and Video Security Systems Policy (PDF) that the use of video analytics may occur (but not limited to) occupancy counting, face-covering compliance, and more.

Although not part of our study, the University of Miami’s use of video analytics was flagged up after a student protest. It was claimed that through facial recognition, students were recognized for taking part in the protest, sparking a huge debate as to whether such surveillance measures were necessary. The university’s use of video analytics includes specific algorithms that can detect predefined situations such as motion detection, object detection, and more.

Student tracking apps have become the modern medium of student surveillance. With universities and colleges moving online during the pandemic, the world of academia had to find new ways to monitor work completion and to check exams were being taken fairly.

Some of the most-used apps are:

For many universities, contact tracing apps were deemed necessary to help try and slow the spread of COVID-19. This included:

Universities using the most surveillance technology

Below are the top five universities that have implemented the most surveillance technologies:

Researchers at Comparitech took the top 100 colleges ranked on the National Center for Education Statistics as having the largest enrollment figures for 2020 but omitted any college where we couldn’t find enough data. This left us with a comparison of 50 colleges within this top 100.

We then searched a range of sources, including university crime safety reports, press releases, and news sources, to find the most up-to-date security camera figures found at each college.

For crime reports, we used the Campus Safety and Security database provided by the U.S. Department of Education, looking specifically into 2020’s figures of crimes reported on campus and in on-campus housing facilities. These were then considered against student enrollment figures to gain the number of crimes reported per 1,000 students.