StrongVPN and NordVPN add the Wireguard protocol to their apps, promise faster speeds

Users of StrongVPN and NordVPN will find a new feature added to their apps: the option to use a new protocol.

WireGuard promises to be a faster and more efficient method of secure data exchange between a user’s device and a VPN server. Although the protocol has existed for a few years, it hasn’t been adopted by any major VPN providers until now.

StrongVPN uses the standard version of WireGuard, while NordVPN uses a modified version that it calls NordLynx.

NordVPN says users can expect download and upload speeds up to twice as fast as other popular protocols like OpenVPN and IKEv2, according to its latest tests. StrongVPN says it can also improve battery life.

WireGuard is open source and only consists of about 4,000 lines of code, making it easy to deploy and audit.

Both VPN providers integrated WireGuard across all of their apps, including Windows, MacOS, iOS, and Android.

Unlike StrongVPN, NordVPN elected not to use the vanilla version of WireGuard, and instead launched its own version dubbed NordLynx. It did so because NordVPN was concerned about how WireGuard assigns IP addresses to users, which requires it to store user data on company servers. This would go against NordVPN’s zero logs privacy policy.

So NordVPN created what it calls a “double NAT” system to establish a secure VPN connection without storing any identifiable user data on its servers.

In a statement, the company explains:

The double NAT system creates two local network interfaces for each user. The first interface assigns the same local IP address to all users connected to a server. Once the secure VPN tunnel is established, the second network interface with a dynamic NAT system kicks in. Dynamic local IP addresses remain assigned only while the session is active and allow not to store any identifiable data on the server.

You can learn more about how NAT firewalls work here.

In its press release, StrongVPN did not address WireGuard’s IP address assignment privacy issue as highlighted by NordVPN.

How to use WireGuard on NordVPN

To use NordLynx, NordVPN users need to first update their apps to the latest version.

If you don’t see NordLynx as an option, give it a few days. NordVPN is rolling out the update gradually in waves.

OpenVPN remains the default protocol in NordVPN if you opt for the “automatic” protocol selection.

How to use WireGuard on StrongVPN 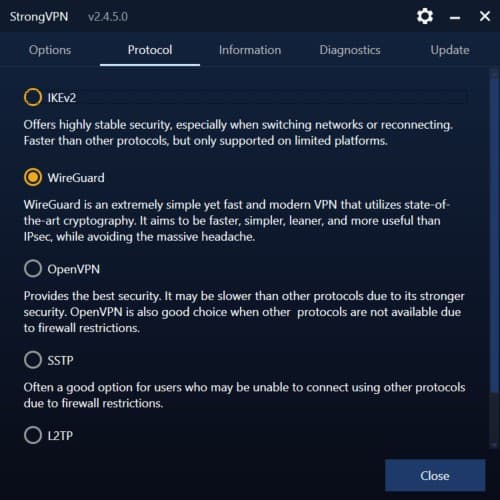 Although Wireguard has been integrated into StrongVPN, you’ll still need to opt in to use it. Make sure you’re using the most up-to-date version of the app.

On mobile, you can find WireGuard in the Connection settings.

WireGuard, a relatively new protocol, is catching on fast in the VPN world.

Daniel Markuson, a digital privacy expert at NordVPN, explains, “WireGuard is a relatively simple yet extremely fast and modern open-source protocol that we are very excited to adopt. We believe that due to its promising capabilities, WireGuard® might become a new standard in VPN technology.”

“Making advanced security available to all our customers is important to us. Since the development of WireGuard, StrongVPN has been working hard to implement this exciting new protocol across our apps and platforms,” said Doug Haden, head of StrongVPN’s Support Team. “WireGuard will have many positive impacts on the functionality of StrongVPN, and we believe this is a huge step forward for VPN users as well as the entire industry.”

WireGuard was built by Jason A. Donenfeld, developer and founder of Edge Security. It is still in development.

You can read a detailed comparison of various VPN protocols here.