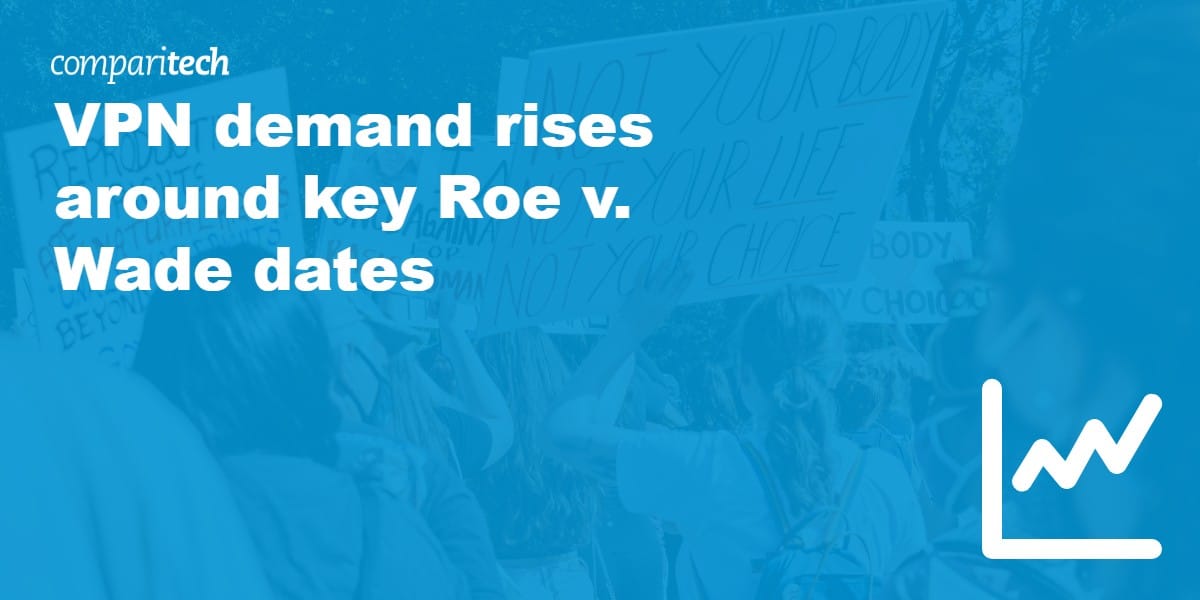 The Supreme Court’s decision to overturn Roe v. Wade has not only thrown women’s rights into question but their privacy, too.

Reports suggest many American women started deleting their period-tracking apps in May when the Supreme Court’s draft opinion that it would overturn Roe v. Wade was leaked. But research from Comparitech finds that women may have been thinking about their online privacy way before the decision was made.

Based on searches for virtual private networks (VPNs), women may have sought additional online privacy protections as far back as September 2021 when Roe v. Wade was under increasing threat.

Were women actively searching for VPNs in a bid to protect their privacy should Roe v. Wade be unturned?

Our team of researchers used Google Trends to monitor spikes in traffic for VPNs, analyzing data for “best VPN” and “free VPN” (the two most popular generic terms for VPNs) in particular. We found that VPN searches reached yearly peaks around key dates for the anti-abortion rulings and observed spikes in states around certain abortion-related decisions, especially in those where abortion rights are under threat.

For example, according to Google Trends, Alabama’s biggest spike in “best VPN” searches happened straight after Arizona officials wanted to enforce the abortion law while appealing the federal ruling that it’s unconstitutional (week commencing October 10, 2021). And Texas’ happened the week of the Supreme Court’s decision to review Roe and to keep Texas’ controversial abortion law in place.

While the correlation is interesting, we can’t ensure those spikes are solely related to Supreme Court’s decision-making process, as people have many varied reasons for using VPNs.

Some of the key (US-wide) dates from the past 12 months where we saw spikes in VPN searches include:

The above image shows how VPN searches reached an initial peak between September 19 and 25 (when the Supreme Court set its date to hear arguments surrounding the Mississippi case) before reaching its highest peak in late October when the decision to uphold the abortion law in Texas adds to concerns that Roe v. Wade is under threat.

Another spike occurs shortly after between November 28 and December 4 when the Mississippi case is reviewed by the Supreme Court and overturning Roe v. Wade is discussed.

A spike in monthly Google searches for VPNs is also seen in October using Ahrefs data. From September to October, searches increased by 10 percent (from 609,458 to 668,255), reaching the highest peak for 2021. The same data is not yet available for recent months.

To see how traffic differs by state (and by the legal status of abortions in each state), we explored the two highest search terms for VPNs– “best VPN” and “free VPN.”

In some states, we can see spikes at crucial decision-making stages, whether this be national or at state level. But these spikes that may be attributed to Roe v. Wade decisions tend to occur in states where abortion is illegal, restricted, or under threat.

Please see the below table which describes where the spikes are noted and what these perhaps correlate to, as well as the legal status of abortion in the state (“Illegal (Blocked)” means a court has temporarily blocked a ban from coming into effect).

Spikes in some “legal” states are noted around key dates, too, especially in states directly impacted by the decisions made by neighboring states. For example, Colorado women are deleting period-tracking apps due to privacy concerns, despite abortion being legal here. Colorado was one of the states many Texan women visited when seeking a safe abortion after the introduction of the abortion law in their state in 2021.

Additional detail about VPN use for reproductive health research

A VPN establishes a secure connection between the user and the internet, routing all data traffic through an encrypted tunnel and disguising the IP address to secure online activity on a connected device. While it is certainly a powerful privacy tool, it won’t protect or secure other forms of data that some believe may be used in enforcing reproductive health restrictions. HIPAA, for example, prevents patient health information from being disclosed without consent or knowledge, but it won’t protect abortion patients from subpoenas, court orders, or warrants in states where the procedure is illegal.

While there does appear to be some correlation between VPN searches and key Roe v. Wade dates, people have many reasons for searching for VPNs so we can’t say with absolute certainty that the trends we are witnessing relate solely or partly due to the Supreme Court’s decision to overturn Roe v. Wade.

We chose to review “best VPN” and “free VPN” keywords on a state level so as to try and pinpoint VPN searches that people would conduct when looking for a VPN service. This should help remove any results that aren’t related to searching for a new VPN provider. These two searches are the top generic VPN searches in the US, according to Ahrefs.

To see how spikes for these search terms may correlate to Roe v. Wade we searched for relevant state news in the time period of the spike, using keywords such as “Roe v. Wade” and “abortion” along with the specific state.