How to Watch 3sat Abroad (Outside Germany) with a VPN

While 3sat is a free-to-air TV channel, much of its online content is only available in Germany, Austria, and Switzerland. We’ll show you how to watch 3sat outside Germany with a VPN and suggest the best VPNs to use.
Mark Gill TECH JOURNALIST, VPN AND PRIVACY SPECIALIST 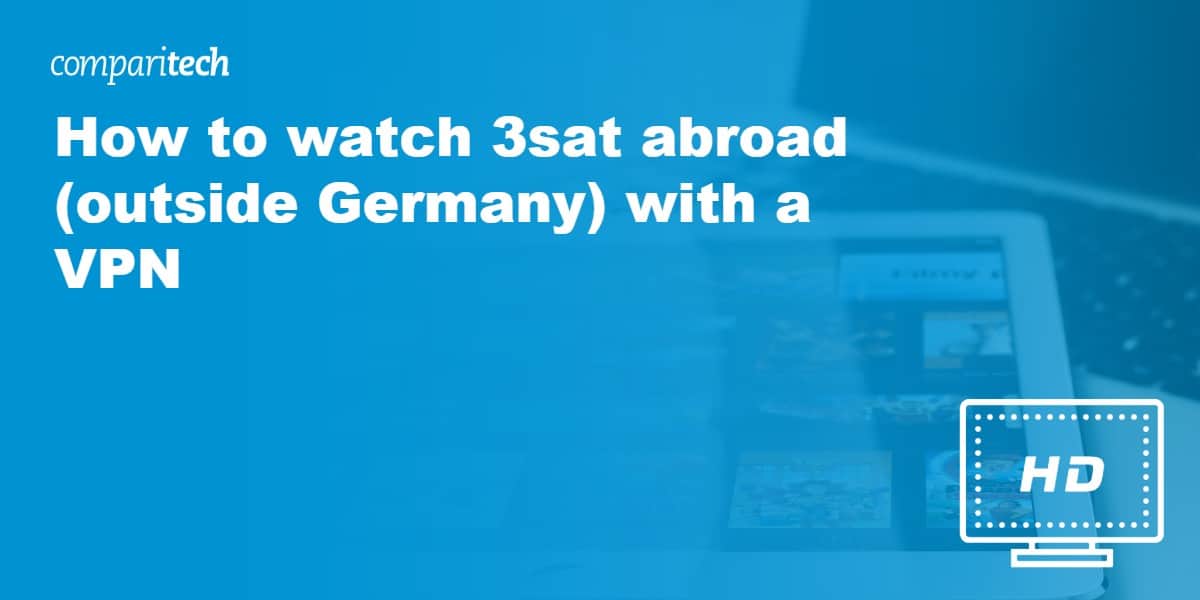 This translates as “This consignment is only available in Germany, Austria and Switzerland”. 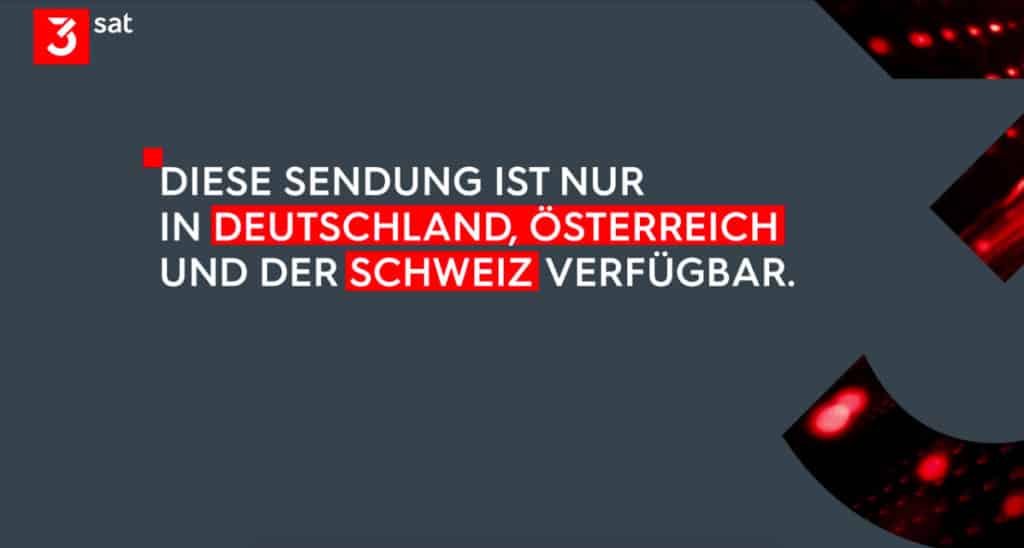 You can use a VPN to watch 3sat outside of Germany. Short for Virtual Private Network, a VPN encrypts your internet traffic and routes it through one of its own servers elsewhere in the world. This allows you to easily switch IP addresses and access region-locked services anywhere: for instance, by connecting to a VPN server in Germany, you’ll be given a German IP address. This will allow you to unblock 3sat abroad as if you were browsing from Germany.

How to watch 3sat abroad with a VPN

Using a VPN with 3sat isn’t difficult. Here we’ll guide you step-by-step through what you need to do:

NordVPN is offering a fully-featured risk-free 30 day trial if you sign up at this page. You can use the VPN rated #1 for 3sat with no restrictions for a month - more than enough time for you to decide if you want it for the long haul.

In case you don’t have time to read through the best VPNs for 3sat, here’s a quick summary:

Here’s our list of the best VPNs for 3sat:

NordVPN stands out with its large network of more than 5,000 servers, over 200 of which are in Germany. These servers are optimized for P2P file-sharing and bypassing internet restrictions in countries with strict online censorship. Speeds are fast enough for uninterrupted streaming and NordVPN can unblock many region-locked websites and services including 3sat, Netflix, and HBO.

There are a wide range of apps available and with up to six simultaneous connections permitted, you can protect all of your devices at once. This VPN offers an excellent customer support service which is available 24/7 via live chat and email. NordVPN is a no-logs provider and is headquartered in Panama. Security features include 256-bit AES encryption, DNS and IPv6 leak protection, and a customizable kill switch.

BEST VPN FOR 3SAT:NordVPN is our #1 recommendation for watching 3sat outside Germany. Also works with Netflix. Very user-friendly VPN with excellent apps and browser extensions. 24/7 support and strict no-logs policy to protect your privacy. Has a 30-day money-back guarantee.

Surfshark is the fastest VPN we’ve tested and can be used to unblock 3sat and indeed many of the streaming services you’re likely to encounter. It works with Netflix, Hulu, HBO Go, and more. Better still, this VPN lets you connect an unlimited number of devices simultaneously so if you’re planning on sharing your VPN with family, Surfshark is well worth considering. Overall, Surfshark has more than 3,000 servers in 65 countries, allowing you to unblock content worldwide.

This VPN works with a wide range of devices and offers apps that are easy for beginners to navigate. It also helps that the service comes with 24/7 live-chat support in case you run into any problems. Surfshark includes plenty of security features to protect your online privacy. These include 256-bit AES encryption, DNS leak protection, a kill switch, and no-logs policy. There’s even an ad-blocker and the option to use Double VPN servers for extra security.

BEST VALUE VPN:Surfshark lets you connect an unlimited number of devices—great for families. Unblocks 3sat, Netflix, and more. Very easy to use apps and 24/7 live chat support. Highly secure with encryption and strict no-logs policy. Has a 30-day money-back guarantee.

ExpressVPN has servers in Frankfurt and Nuremberg, making it easy for you to access 3sat from abroad. This is the one of the best VPNs for watching 3sat outside Germany thanks to its high-speed servers and reliable connections. It offers unlimited bandwidth which means you can stream without any buffering or lag. What’s more, it excels at unblocking streaming services including Netflix, Amazon Prime Video, and BBC iPlayer.

This is a particularly beginner-friendly VPN service because it offers live chat and email support, 24/7. ExpressVPN safeguards your privacy using 256-bit AES encryption, DNS, IPv6, and WebRTC leak protection, and a kill switch. This VPN is based in the British Virgin Islands and doesn’t store any identifying logs. You also have the option to sign up for the service semi-anonymously with a throwaway email address.

SPEED AND SECURITY:ExpressVPN offers fast and reliable connections and has servers in 90 countries. Unblocks Netflix and Amazon Prime Video. Includes 24/7 support and strong security with encryption. The 30-day money-back guarantee means you can try it risk-free.

CyberGhost has more German servers than most of its rivals. In total, some 900 of its 7,000+ servers are in Germany (spread throughout Berlin, Dusseldorf, and Frankfurt). This service is known for its high-speed connections, which are ideal for streaming and torrenting. Aside from unblocking 3sat overseas, CyberGhost also works with Netflix US. You can also use this VPN to connect up to seven devices simultaneously.

This service offers several interesting features. There’s the option to compress data to save on mobile data or force the use of HTTPS for websites, for instance. It also includes a 24/7 live-chat customer support service. A high level of security is offered in the form of a strict no-logs policy, 256-bit AES encryption, and DNS and IPv6 leak protection. There’s also an automatic kill switch to protect you from data loss should the VPN connection drop.

HIGH SPEED SERVERS:CyberGhost is fast for streaming 3sat. Also unblocks Netflix US. 900+ servers in Germany and 7,000+ worldwide. Use on up to seven devices at once. Has 24/7 live chat support and a strict no-logs policy. Comes with a 45-day money-back guarantee.

IPVanish is a US-based VPN with servers in dozens of countries worldwide, including Germany. It has over 50 servers in Frankfurt, Germany at the time of writing and over 1,900 in dozens of other countries. One of the best things about IPVanish is that you can connect all of your devices simultaneously, allowing you to share with family. What’s more, it’s able to unblock Netflix US—something that many VPNs struggle to do.

This VPN offers live chat support should you encounter any problems. However, the apps are simple enough to use and you can connect to a server in a single click. IPVanish puts your privacy first; it includes 256-bit AES encryption, DNS and IPv6 leak protection, a kill switch feature, and no-logs policy, all of which serve to keep your activities private.

You can use IPVanish via its apps for Windows, Mac, Android, iOS, and Amazon Fire TV/Fire Stick. Manual installation is required for Linux and routers.

PrivateVPN has fast servers in Frankfurt and Nuremberg, and 200 elsewhere in the world. As such you can watch 3sat outside Germany without having to deal with any buffering or lag. This VPN offers unlimited bandwidth and lets you have up to six simultaneous connections. We’ve found that PrivateVPN is able to unblock most geo-restricted content we’ve come across. This includes the likes of Netflix and Amazon Prime Video.

What’s particularly noticeable is that this VPN offers a more personalized service. The live chat support involves talking with the developers directly. There’s also the option of free remote help and installation should you need it although the desktop and mobile apps are extremely user-friendly. Your data is secured through PrivateVPN’s use of 256-bit AES encryption. There’s also DNS and IPv6 leak protection, a kill switch, and no-logs policy.

PrivateVPN apps are available for the following platforms: Windows, Mac, Android, and iOS. However, Linux and routers require manual setup.

EXCELS AT UNBLOCKING:PrivateVPN works with everything from 3sat to Netflix. Fast servers in dozens of countries worldwide. Apps are user-friendly and the service includes live chat support. Connect up to six devices. No-logs policy. Has a 30-day money-back guarantee.

Hotspot Shield servers are available in 80 countries worldwide, Germany included. You’ll therefore be able to access 3sat while traveling abroad. Note that this VPN also works well with the likes of Netflix, Amazon Prime Video, and Hulu. Streaming in high definition shouldn’t be a problem thanks to the unthrottled servers. Once signed up, you’ll be able to secure five of your devices at the same time.

With a Hotspot Shield subscription, you’ll have access to a whole host of extra features, many of which are security-related. These include a password manager and spam call blocker. Of course, there’s also 256-bit AES encryption, a kill switch, and DNS leak protection. Further, you’ll be able to stream anonymously because Hotspot Shield doesn’t keep any logs by which you can be identified as a user. 24/7 support is also included.

Finding the best VPNs for 3sat: our methodology

It’s frustrating to travel abroad and then encounter geographic restrictions on your favorite websites and services such as 3sat. You may also find that your connection is throttled, resulting in issues such as lag and buffering. Fortunately, you won’t have such issues with the best VPNs for 3sat. Here’s our methodology for finding them:

Of course, looking for VPNs that offer the above features is just the start. We don’t just take these services at their word. Instead, we test them out for ourselves which is all part of our VPN testing methodology.

Can I use a free VPN to watch 3sat outside Germany?

While you can use a free VPN to watch 3sat abroad, we don’t recommend it. The streaming experience with free VPNs is often a frustrating one. A lack of servers and a high number of users makes for plenty of interruptions in the form of buffering and lag. You may even find that the free VPN actively restricts your bandwidth.

Free VPNs are generally pretty bad at unblocking content. Some are able to unblock the likes of 3sat but most free VPNs can’t get past the anti-VPN measures of Netflix, for example. Free VPNs are known to have limited features. This means you probably won’t be able to have multiple simultaneous connections or contact customer support if you have any issues.

Last but certainly not least, free VPNs rarely protect your privacy online. Some don’t use AES encryption to secure your data while others may not even have a kill switch feature. What’s worse, free VPNs are free because they have other means to make money. This may mean bombarding you with spam ads or logging your activity and selling the data to third parties.

What can I watch on 3sat?

3sat is known for its wide range of cultural TV programs. Much of the content consists of documentaries, live music concerts, and independent films. You can watch the following on 3sat: