6 Best VPNs for Bosnia and Herzegovina in 2020

Unable to access online content from abroad while in Bosnia and Herzegovina? In this post, we’ll explain how a Virtual Private Network (VPN) can help you unblock geo-restricted websites. We’ll also reveal the best VPNs for Bosnia and Herzegovina.
Mark Gill TECH JOURNALIST, VPN AND PRIVACY SPECIALIST 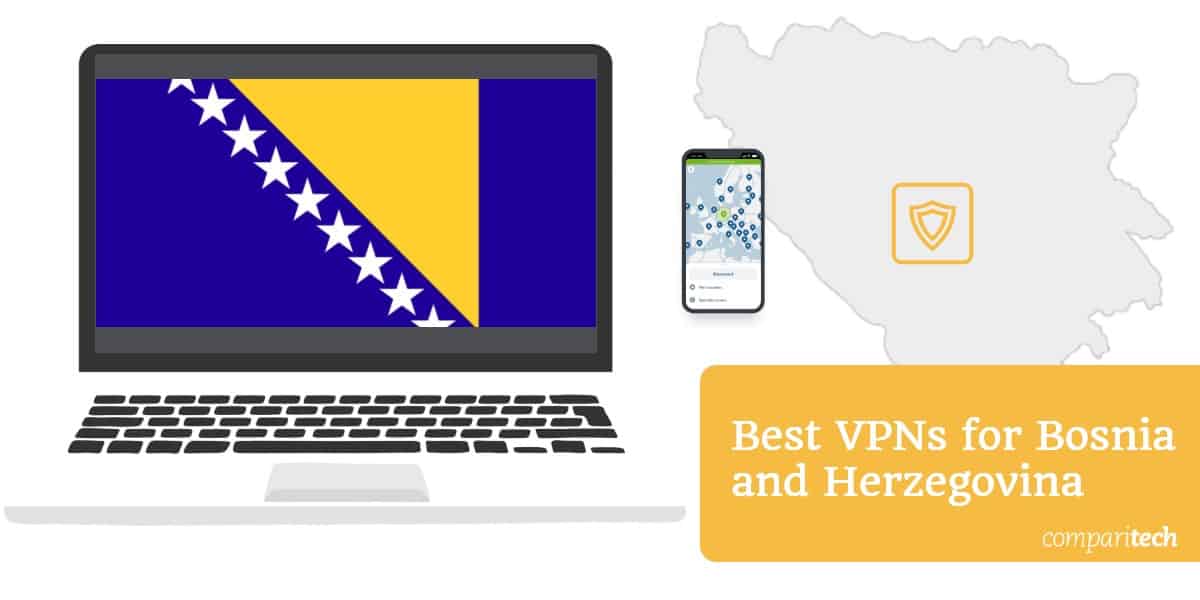 Depending on where you are in the world, the online content you can access varies. Geographic restrictions are usually for copyright and licensing reasons although government censorship is also a factor in some countries. If you’re in Bosnia and Herzegovina, you won’t be able to watch Netflix US or BBC iPlayer, for example. On the other hand, if you’re from Bosnia traveling abroad means you can no longer stream Bosnian TV channels like BHT 1.

Thankfully, a VPN helps you access all of your favorite websites and services, no matter your location. When you connect to a VPN server, you’re given a different IP address. For example, if you connect to a server in Bosnia and Herzegovina, you’ll get a Bosnian IP address. As a result, you can spoof your location and access region-locked Bosnian websites and services while traveling abroad.

We’ll review each of the best VPNs for Bosnia and Herzegovina later on in this article. In a hurry? Here’s a quick overview of each to save you some time:

Best VPNs for Bosnia and Herzegovina:

Not all VPNs are of good quality, with many failing in areas such as speed or security. It’s for this reason that we ensured that the VPNs recommended in this list all meet the following key criteria:

Best VPNs for Bosnia and Herzegovina

Here’s our list of the best VPNs for Bosnia and Herzegovina:

ExpressVPN is ideal whether you’re browsing in Bosnia or traveling abroad. It has more than 3,000 servers on offer. In fact, these servers are available in 94 countries (including Bosnia and Herzegovina) which is more than any other VPN on this list. Offering very strong unblocking ability, ExpressVPN can be used with Bosnian TV channels such as BHT 1 as well as streaming services like Netflix. Further, thanks to its fast, reliable speeds and unlimited bandwidth, you won’t have to contend with buffering or lag.

When you connect to an ExpressVPN server, your data is secured with 256-bit AES encryption. This service is headquartered in the British Virgin Islands where there are no data retention laws. ExpressVPN doesn’t keep any identifying logs of its users and also uses DNS, IPv6, and WebRTC leak protection and a kill switch to keep your activities private. This VPN has excellent customer support which you can contact 24 hours a day via live chat or email.

Secure up to five devices simultaneously with the ExpressVPN apps for Windows, Mac, Linux, Android, and iOS. You also have the option of using browser extensions for Chrome and Firefox while custom firmware is offered for routers.

NordVPN has approximately 5,000 servers in nearly 60 countries around the world. This includes servers in Bosnia which are optimized for P2P traffic. With no bandwidth limits, one of the advantages of using NordVPN is that you can bypass ISP throttling. This means uninterrupted streaming of Netflix, Amazon Prime Video, and more. You’ll also be able to enjoy up to six simultaneous connections via a single account.

Although NordVPN’s apps are easy to use, there’s 24/7 live chat support should you need it. Security is an area in which NordVPN excels. In particular, it allows you to connect to various specialty servers including those that use multiple servers for an extra layer of encryption. This is a no-logs service that’s headquartered in Panama where there are no mandatory data retention laws. It also offers 256-bit AES encryption, DNS and IPv6 leak protection, and a kill switch feature.

You can use NordVPN via its apps for the following operating systems: Windows, Mac, Linux, Android, iOS, and Android TV. Alternatively, Chrome and Firefox browser extensions are available to download. Manual installation is necessary for use with routers.

Surfshark can be described as a strong all-rounder. Its network is made up of more than 1,700 servers in 60+ countries including Bosnia and Herzegovina. It’s a reliable choice for streaming as it works with Netflix, Amazon Prime video, and BBC iPlayer, among others. In fact, you can unblock all sorts of geo-blocked websites from around the world. However, one of the best features is that there’s no limit on the number of devices you can connect at any one time.

This is a particularly user-friendly service thanks to the easy-to-navigate apps and the presence of 24/7 live chat support. Behind all this, there’s an extensive set of security features that serve to keep you safe online. For starters, there’s 256-bit AES encryption, protection from DNS leaks, and a kill switch. However, this no-logs service also provides Double VPN servers that encrypt your internet traffic twice. Surfshark also blocks ads, trackers, and malware automatically.

If you choose Surfshark, you’ll have access to apps for Windows, Mac, Android, iOS, Linux, and Amazon Fire TV. This VPN also offers Chrome and Firefox browser extensions. Note that manual configuration is required for use with routers.

CyberGhost is well worth considering if you’re looking for servers in a wide range of locations. What sets it apart from many rival VPNs is its impressive network of over 6,000 servers which are available in 90 countries. Better still, it has high-speed connections as well as unlimited bandwidth. You’ll be able to stream the likes of BHT 1 and FTV outside Bosnia and Herzegovina. It’s also worth knowing that it even unblocks Netflix US.

A single CyberGhost account supports up to seven simultaneous connections while 24/7 support is available via live chat. You can expect a wide range of user-friendly apps, allowing you to secure all of your devices. This is one of the most secure VPNs we’ve tested thanks to its strict no-logs policy and independently operated servers. You’re further safeguarded with 256-bit AES encryption, an automatic kill switch, and DNS and IPv6 leak protection.

Connect to a server in Bosnia or abroad by downloading CyberGhost’s apps for Windows, Mac, Android, iOS, Linux, Amazon Fire TV, or Android TV. You’ll also have the option of Chrome and Firefox browser extensions. Manual setup is required for use with routers.

LAG-FREE STREAMING:CyberGhost has high-speed servers and unlimited bandwidth for streaming and torrenting. More than 6,000 servers in 90 countries, Bosnia and Herzegovina included. Use on up to seven devices. Strict no-logs policy. 45-day money-back guarantee.

Hotspot Shield has about 1,800 servers with a presence in 80 countries including Bosnia and Herzegovina, it can be used to access geo-blocked content worldwide. For example, Hotspot Shield has a particularly large server presence in the US and can reliably unblock Amazon Prime Video and Hulu. The consistent server speeds mean you’re free to stream and download as much as you like.

You’re unlikely to have any problems using Hotspot Shield because the apps are quick and easy to navigate. Furthermore, this VPN provides 24/7 support via live chat should you have any questions. In connecting to a Hotspot Shield server, you can browse online anonymously. That’s because it doesn’t keep any logs by which you can be identified. There’s also 256-bit AES encryption, DNS leak protection, and a kill switch, while the apps let you secure up to five devices at the same time.

Hotspot Shield apps are offered for the following: Windows, Mac, Android, and iOS. Another option is a browser extension for Chrome. While this VPN can be used with Linux and select routers, you’ll need to configure this manually.

ZenMate has more than a dozen servers in Bosnia and Herzegovina which are optimized for P2P traffic. This is just a small part of its network which consists of some 3,500 servers in over 70 countries at the time of writing. The server speeds offered are more than fast enough for streaming HD video. Indeed, the consistency of the connections means streaming should also be lag-free. When it comes to unblocking, ZenMate works with Netflix, Amazon Prime Video, BBC iPlayer, and more.

One of the best features of ZenMate is that it lets you protect an unlimited number of devices simultaneously. With multiple security features in place, you’re protected from hackers and snoopers. In particular, there’s 256-bit AES encryption as well as DNS leak protection and a kill switch. ZenMate also states that it has a strict no-logs policy and doesn’t keep any record of the activity of users.

It’s possible to use ZenMate on a wide range of platforms. Indeed, apps are offered for Windows, Mac, Android, and iOS while browser extensions are available for Chrome and Firefox. It can also be manually configured to work with Linux and select compatible routers.

UNLIMITED DEVICES:ZenMate has approximately 3,500 servers in 75 countries. Over a dozen servers in Bosnia and Herzegovina. Connect as many devices as you want at once. Reliable unblocking of Netflix. Security includes encryption. 30-day money-back guarantee.

How to use a VPN in Bosnia and Herzegovina

New to using a VPN? All of the VPNs we’ve recommended offer beginner-friendly apps and 24/7 live chat support. Better still, setting up a VPN shouldn’t take more than a few minutes.

Here’s how you can use a VPN in Bosnia and Herzegovina:

TRY A PAID VPN FREE: Don’t want to commit to a VPN subscription? With ExpressVPN’s 30-day money-back guarantee, you can try out a paid VPN risk-free. This requires an upfront payment but you’ll then have 30 days to request a refund if you change your mind.

⭐Why do I need a VPN in Bosnia and Herzegovina?

There’s no doubt that many people use VPNs in order to access online content that’s geo-restricted in their location. For example, using a VPN in Bosnia & Herzegovina means you can access international streaming services such as Netflix and BBC iPlayer. If you’re traveling abroad and want to access your online banking account, you may find that the bank’s fraud department flags the foreign login, blocking access. However, connecting to a server in your home country allows you to bypass this issue.

⭐Can I use a free VPN in Bosnia and Herzegovina?

Having researched many different VPNs, we’ve found that even most paid VPNs don’t provide servers in Bosnia and Herzegovina. Needless to say, free VPNs offering servers in the country are few and far between. However, there are more reasons to avoid using a free VPN. For starters, they offer few server locations while connections are slow. If you’re planning on streaming, expect a lot of lag and buffering. Indeed, you probably won’t be able to unblock many streaming services either.

It’s also important to be aware of the various security concerns surrounding free VPNs. Many lack important security features that are designed to keep you safe online. For example, some don’t encrypt your internet traffic while others don’t offer a kill switch. This leaves you susceptible to your data becoming compromised. You may even find yourself targeted with ads or even have your data logged and sold to third parties. With the best VPNs for Bosnia and Herzegovina, you don’t need to worry about such issues.

⭐What Bosnian TV channels can I watch with a VPN?

One of the many advantages of using a VPN is that you can use it to stream Bosnian TV abroad. This includes BHT 1, FTV, and Nova BH. This means that you’ll be able to stream your favorite Bosnian TV shows including the following: