What is Article 13 and how could it impact publishers and internet users?

Parts of the new EU Copyright Directive, in particular Article 13, have disgruntled major publishers, including YouTube and Twitter. Find out about the EU’s seemingly drastic approach to online copyright laws and what it means for publishers and internet users.
Aimee O'Driscoll VPN AND CYBERSECURITY EXPERT 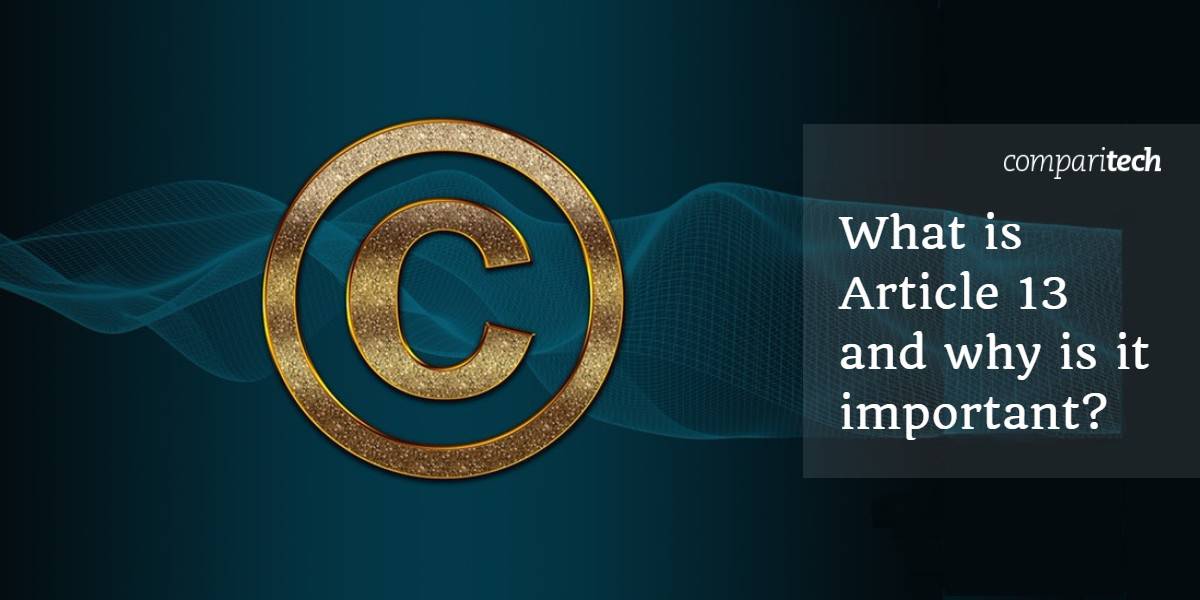 Dubbed the “meme ban,” Article 13 of the EU Copyright Directive has come under much criticism as it puts the onus on publishers to enforce copyright laws. The likes of Google, YouTube, and Twitter are less than happy about the implications of the new legislation.

In this post, we explain more about what’s involved in Article 13 and what it means for publishers and internet users.

What is Article 13 and why is it important?

Article 13 is part of The European Union Directive on Copyright in the Digital Single Market (often abbreviated to “The EU Copyright Directive”). Directives are in place to set objectives for EU member states, so once the legislation is finalized, all member states will need to come up with their own legislation that aligns with the directive.

Article 13 is a part of The EU Copyright Directive that is getting some negative attention. Specifically, the problem lies with the responsibility being placed on publishers. The directive requires that providers of online content sharing services “take, in cooperation with rights holders, appropriate and proportionate measures leading to the non-availability of copyright or related-right infringing works or other subject-matter on those services, while non-infringing works and other subject matter shall remain available.”

What this basically means is that it will be the publisher’s responsibility to take down any copyrighted material. In the current landscape, publishers like YouTube will typically remove content if the copyright holder asks them to. They do have some detection measures in place for weeding out infringing material, but they’re not able to catch everything. As the legislation stands, they would likely need to implement superior automated detection measures, which would be costly and potentially unreliable.

The implications for publishers

YouTube CEO Susan Wojcicki has plenty to say about Article 13 on the company’s blog, including the following:

Her major stated concern is that by using filters to block copyrighted content, all copyrighted content could be blocked, even when it involves fair use. In relation to this, in another blog post, Wojcicki discusses the difficulty in determining who owns rights to material in the first place.

However, the real underlying concern for publishing giants is bound to be revenue. By tightening rules around copyrighted content, YouTube and its publishing counterparts will be unable to deliver the same range and quality of content to their audiences. This will ultimately force consumers to look elsewhere (to platforms that are paying copyright holders for their work).

As the directive is not yet law, it will be up to member states to decide the exact rules that will be in place and punishment, if any, for breaking them.

The implications for users

Although the reasoning behind the directive — copyright holders getting paid fairly for their content — isn’t being disputed, there are concerns about how the directive can be implemented. As mentioned, current talks involve the use of automated filters to detect infringing content. The latest version does state that automated blocking of content should be avoided, but thus far, there is little to suggest an alternative.

If automated filters are put in place, there’s a real concern that fair use of copyrighted content could be blocked. This is where the “meme ban” moniker comes in, as people are wondering if a meme would pass such automated systems. Currently, even though memes often involve copyrighted images, they are protected from copyright laws as parodies. If automated systems are used to detect copyrighted materials, it’s unclear if such images would pass.

No matter what gets through the filters, there’s no doubt that implementation of Article 13 will result in EU viewers having very limited access to content as compared to the current landscape. It could whittle their options down to content from a few large companies, and force them to pay premium prices for content that they are used to consuming for free or for a minimal fee. As we discussed in an earlier post, it’s highly likely that Virtual Private Network (VPN) usage will increase among Europeans as they find ways to maintain their status quo in terms of content consumption.

What will happen next?

The directive is not yet law and although it has many proponents — mainly content producers and their representatives — is has a great number of opponents who are voicing their concerns. We mentioned YouTube’s CEO earlier, but many other company bosses and other internet pioneers have joined in their criticism of the directive. Some have even penned an open letter to the President of the European Parliament to express their discontent with Article 13 as it stands.

Included in that group is Wikipedia founder Jimmy Wales, even though this platform has already been explicitly excluded from the scope of Article 13. This fact is symbolic of the stand against the directive being less about the bottom line of individual companies and more about the fight for overall freedom of expression via the internet.

Even though the directive has been passed in the European Parliament, these voices of concern don’t have to be in vain. The final wording has yet to be decided and is being discussed by the European Commission, Council, and Parliament. The wording will be brought to a vote in January 2019, and once passed, the directive will need to be implemented by EU member states within two years.