Looking to watch Paris Saint-Germain vs Bayern Munich on Kodi? We explain how to live stream the 2020 Champions League Final from anywhere, even abroad.
Paul Bischoff TECH WRITER, PRIVACY ADVOCATE AND VPN EXPERT

It’s anyone’s guess as to who will win in the 2020 Champions League Final between Paris Saint-Germain and Bayern Munich. One thing’s for sure, though: the only way to find out is to tune in at 8 PM BST on August 23 and watch the match for yourself. Thankfully, you can live stream the 2020 Champions League Final free online through a variety of sources.

In the UK, BT Sport will show the 2020 Champions League final both on TV and online through a free live stream, with no subscription necessary.

Watch the Champions League Final from anywhere with a VPN

If you live outside the UK but still want access to the live streams, we recommend using a VPN to connect to a server in the UK. This will mask your true location and assign you a UK IP address. Once connected, you can bypass the geo-blocking and watch as if you live in the UK. Once you have a VPN connection, you can utilize Kodi to watch the game live (more info below).

Our top recommendation is IPVanish, a paid VPN service with a huge range of servers, including several locations in the UK. IPVanish offers the necessary bandwidth to live stream video in high definition, and a stable connection so you can watch the entire Champions League final uninterrupted. IPVanish offers apps for Windows, MacOS, iOS, and Android. It’s also got a simple, straightforward interface and direct download APK available, which makes it ideal for Kodi users.

BEST VPN FOR KODI:IPVanish is our top choice. Has a large uncongested network of servers and achieves good speeds. Strong security and privacy features make IPVanish a favorite for Kodi and Amazon Fire TV Stick users. Try it risk-free with the 30-day money-back guarantee.

How to watch the 2020 Champions League final on Kodi

If you want to live stream the Champions League final on Kodi, you’re in luck. You won’t need any third-party add-ons; everything you need is located in the official Kodi add-on repository. You simply need to install the Youtube add-on and search for the BT Sport channel to access the stream. 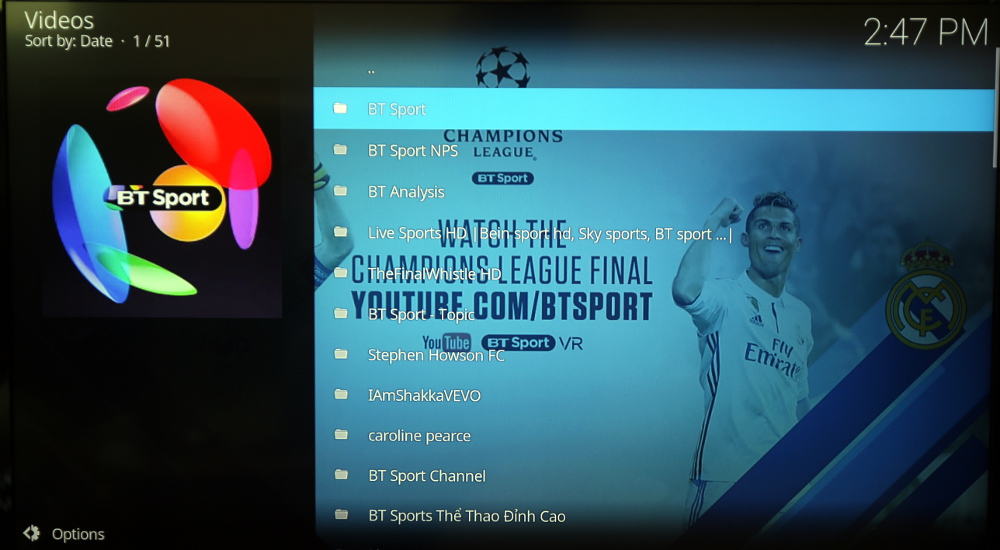 From here, you can use the search function to find the BT Sport channel and the Champions League live stream.

Remember that Kodi users are subject to the same geographic restrictions as everyone else, which means you’ll need a VPN to change your IP address if you’re outside the UK. If your Kodi device supports your provider’s VPN app, then just install it and connect to a UK server before opening Kodi.

If you have an Android-based device without Google Play, you can still sideload the VPN app. For example, you can learn how to install a VPN on Amazon Fire TV and Fire TV Stick in this tutorial.

If your device doesn’t support VPN apps at all, you’ll need to set up the VPN on an upstream device, such as your home wifi router or a virtual router. Most modern laptops have wifi cards that support the creation of virtual wifi routers, which is just a wifi hotspot broadcast from the laptop. Just connect your laptop to a UK VPN server, and then your Kodi device to the laptop’s wifi signal. We’ve got instructions on how to set up a virtual router on PC and Mac.

Additional ways to watch on Kodi

YouTube is the best source, but not the only one. The following TV networks have working Kodi addons that will also be providing free live streams of the 2020 Champions League Final between PSG and Bayern.