What is MTR and Why is it Useful? 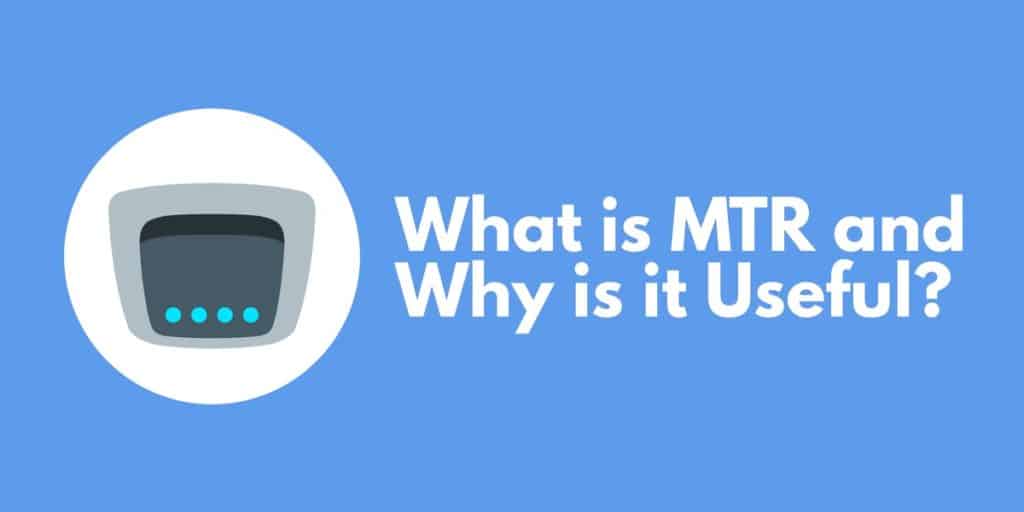 MTR or Matt’s TraceRoute is one of the most popular Traceroute tools available online. The tool has become one of the go-to tools for replacing Ping and Traceroute. MTR network monitor is an invaluable diagnostic tool that can be used to poll remote servers and measure the change of latency over time. To understand what MTR is, we first need to take a closer look at Ping and Traceroute. 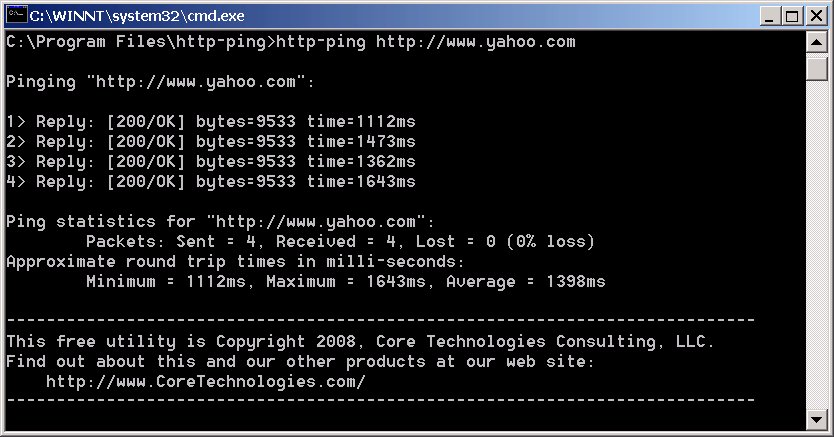 Ping is one of the most commonly-used network diagnostic tools in the world. With Ping, the user can send ICMP packets from one computer to another. The receiving computer then replies with ICMP echo reply packets once the packets have arrived. This ICMP echo reply packet tells you if a device is available or not. If a computer doesn’t send a reply back then you know that it isn’t available.

You can also ping hostnames to monitor DNS connectivity. Generally, network administrators use the Ping tool to measure the availability of hosts across a network. While this sounds good in theory, it is important to note that Ping isn’t always accurate. ICMP packets are often filtered by firewalls meaning that sometimes devices that are up and running don’t respond with ICMP packets.

Traceroute is another widely-used networking tool that records the route between the sender and the receiver. It is different from Ping because it calculates the route and shows the user the amount of time taken for a packet to traverse each hop.

Traceroute is primarily used to pinpoint problem areas within a network. If one hop takes particularly long to travel through then that is a good indication that there is a problem somewhere in the network. To use Traceroute all the user needs to do is enter the traceroute command.

The command sends off an ICMP packet with a time to live value. Every packet that you send has a TTL field. The TTL is the maximum number of hops that a packet can travel before it is discarded. The sender sets the TTL value so that once it is exceeded, the router will drop the packet and notify the original sender with a time exceeded message.

The TTL and the time exceeded together can be used to determine how long it takes for a packet to travel from one hop to another. Once the Traceroute is complete you can then see the number of milliseconds (ms) that the packet took to reach a router. As a result, Traceroute is a good tool for measuring the latency within a network.

The longer it takes for a packet to travel through a hop, the more latency there is. The presence of a high amount of latency tells a network administrator that the network isn’t performing as it should be. Traceroute is included by default on Windows and Unix devices. However, it can also be installed via an online download.

The MTR network monitor combines Ping and Traceroute and combines the availability measuring capabilities of Ping with the hop-to-hop analysis of Traceroute. MTR uses ICMP packets to measure the availability of devices and the length of time taken to travel from hop to hop.

However, what really sets MTR apart from other limited tools is that it records packet loss and jitter as well. MTR thus measures the quality of a connection time it takes to complete a transfer and the percentage of packets lost in transit.

When using MTR you run reports to view performance data. Reports gather data from your network and then feed it back to you in the form of an onscreen table. The table shows you information on packet loss and latency.

Why is MTR Useful?

MTR is a useful tool for a number of reasons. First, it combines Ping and Traceroute together to able to measure the availability of devices in the network as well as monitoring the route. However, it also has a significant advantage over Traceroute because the output is updated continuously. With Traceroute, you have to update scans manually to measure how a network’s performance changes over time.

In contrast, you can run MTR and your information will be connected until you say stop. Being able to monitor the change in network performance over time helps when it comes to troubleshooting.

How to Install MTR

MTR is available on Windows, Mac OS, and Linux. The installation process differs according to which platform you’re working on.

To install MTR on Mac OS you can use Homebrew or Macports. On Home-brew you need to enter the following command:

Alternatively, to run MTR with MacPorts you need to enter:

To install MTR on Linux you need Debian, Ubuntu, CentOS, RHEL, or Fedora. For Debian and Ubuntu you can enter the following command:

On CentOS, RHEL and Fedora you can enter the following command:

How to Use MTR

When using the MTR network scanner, you need to generate an MTR report in order to view your traffic data. MTR reports are directional so it is necessary to generate reports in both directions to get a complete picture of your network’s performance. In this section, we’re going to look at how you can do this. The process is different depending on what platform you’re working on.

In this section we’re going to look at:

To begin, go the host field and enter your domain name. Now click Start. Once this is done packets will start to be transmitted. Packet transmission won’t stop until you press the Stop button. Packet data will be shown in the main canvas view which details the number of packets sent and received as well as the packet loss percentage.

If you’re using the command line interface version of MTR on Linux, then you can generate a report by typing mtr followed by the URL that you want to analyze. For example:

How to Read MTR Reports

A key part of using the MTR network scanner is being able to read the results of a report. As you can see in the image above, the report command specifies where the packets are to be sent (in this instance google.com). The information shown on the report is as follows:

How to Measure Packet loss with MTR

To measure packet loss on the MTR network monitor, you can look at the numerical values under the Loss % column. However, when measuring packet loss with MTR there is one thing to remember: watch out for limiting. Limiting is when service providers place a cap on the amount of ICMP traffic sent by MTR.

ICMP rate limiting is used by service providers to prioritize other network traffic. As a consequence, reports can show packet loss that isn’t due to a configuration issue or fault but because a service provider is imposing a limit on ICMP traffic.

The biggest clue that traffic is being limited is to compare the packet loss between hops. If one hop has a high packet loss but the other surrounding hops are at 0% then it is almost certain that MTR is being limited. As a general rule, if you see lots of different rates of packet loss being reported it is advisable to trust the later hops.

If you are troubleshooting for a particular issue in your network you want to make sure that you measure packet loss both ways. In doing so you will be able to see if there is a problem with the outward route or the return route.

How to Measure Latency with MTR

One of the key pieces of information that you can get from MTR reports is that of latency. Now viewing the latency relies on manually measuring a number of factors.

The first thing you want to do when reading a report is to pay attention to the hop numbers, and the last, average, best, and worst latency at each stage (as shown in the report example above). For example, if the latency jumps up dramatically between one hop to another then this can indicate that there is a problem in that part of the network. However, the latency can be caused by the outward route or the return route.

You won’t be able to see the return route in your report. Instead, you will have to look at the difference between the final hop and the one before it to see if there is a problem there as well. As a result, you will have to run further troubleshooting to diagnose the source of the problem.

How to Measure Jitter on MTR

You can also use MTR to measure jitter. However, you can’t see jitter on the standard report page. To view jitter you need to enter the option command:

With this command, you can determine what fields will be displayed and In which order. The list of fields available is as follows:

Although MTR is a very reliable tool, there are a number of other alternative products that have emerged building off of the original Traceroute program. In this section, we’re going to look at some of the alternatives to MTR which you can use to monitor your network. 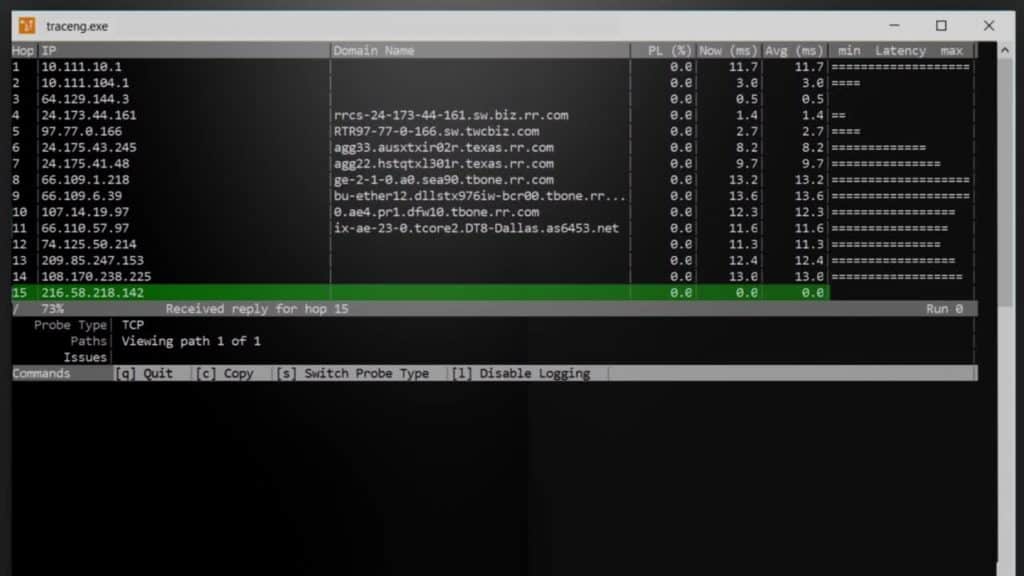 SolarWinds Traceroute NG is SolarWind’s alternative to the MTR network scanner and Traceroute. Traceroute NG can not only detect network path changes, but also offers continuous monitoring. With this program, network path analysis is offered for both TCP and ICMP to give the user-enhanced visibility.

The program runs through a command line interface (CLI). You can view important details like IP addresses, hostnames, number of hops, packet loss, and latency. Being able to measure for performance concerns like packet loss tells you if there is a problem that needs to be dealt with.

TraceRoute NG runs on Windows 8, 8.1, 10, Windows Server 2012 R2 and 2016. Even though Traceroute NG is a proprietary tool, it is available for free. If you’re not a fan of MTR, TraceRoute NG stands in as an excellent alternative. 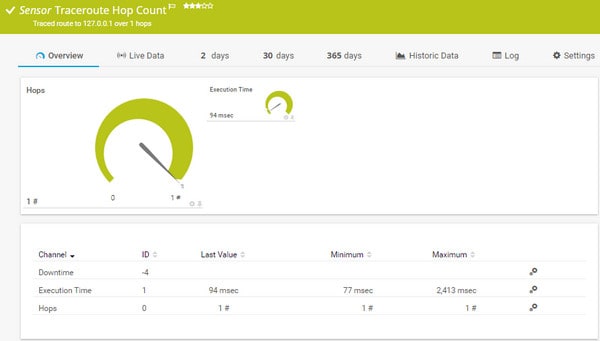 PRTG Network Monitor is a network monitoring platform that offers a number of servers for Traceroute. PRTG Network Monitor is GUI-based so it is easy to use if you aren’t familiar with CLI’s. With the Traceroute Hop Count Sensor you can monitor your network and measure the execution time and number of hops of the transfer. The number of hops is shown as a green dial so that you can clearly see how far a packet has travelled.

There is also a way to monitor jitter and packet loss on PRTG Network Monitor. There is a QOS Round Trip Sensor which shows you the jitter, latency, packet loss, and the mean opinion score of your network connection.

Like MTR, PRTG Network Monitor is available for free. If you want to expand your network monitoring then you can also incorporate other sensors for packet sniffing and NetFlow analysis.

MTR Network Scanner: The Alternative to Ping and Traceroute

If you’re currently using Ping or Traceroute then making the change to MTR is well worth it. You’ll have the benefits of both tools in one platform. We’ve included a basic guide on how to use MTR here so that you can understand the basics of how to create and read reports. While the process is different depending on what platform you’re on, one thing all versions of MTR have in common is that they are easy to use.

However, if you don’t like MTR then other competitors like TraceRoute NG or PRTG Network Monitor are also suitable alternatives. TraceRoute NG functions in much the same way with the ability to view ICMP and TCP data. PRTG Network Monitor is more of a complete network monitoring platform but it offers a Traceroute sensor that helps visualise the text-based Traceroute experience offered by MTR and Traceroute.