Being infected with ransomware is one of the most difficult attacks to recover from. In this post, we take a close look at some ways to reduce your attack surface and we show you five of the best ransomware protection tools.
Liku Zelleke Network configuration, optimization, and security expert 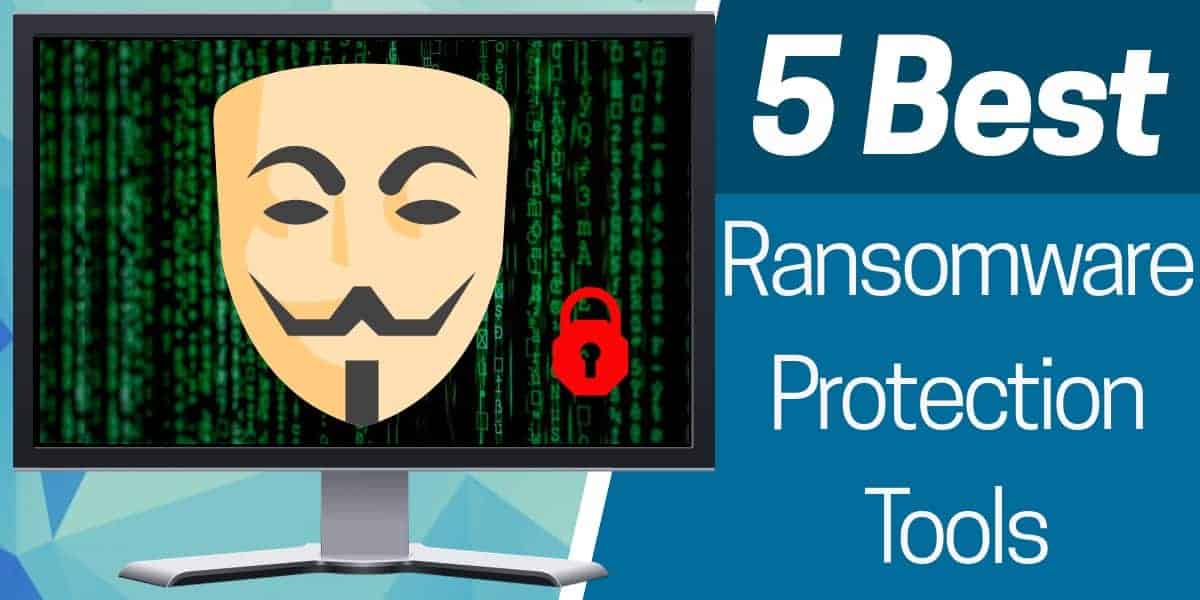 Simply put, ransomware is a type of malware that encrypts files found on a compromised system and then asks victims to pay a ransom to regain access to their own data.

The “ransom” money could be anywhere from a few dollars to hundreds of thousands of dollars.

Of course, there is never any guarantee that victims will recover access to their files even after they have paid. But, it makes sense to have the best ransomware protection solutions in place anyways.

We will have a look at all things ransomware in detail below, but if you just want to know which solutions offer the best defense, here is the list of the five best ransomware protection solutions:

How an iTunes zero-day allowed attackers to install ransomware on the sly https://t.co/5iaAfbuGRE

Do you really need protection against ransomware?

If you think your antivirus solution provides enough protection against malware attacks, you’ve got another think coming.

You see, the problem with an antivirus solution is that it may miss a newly released ransomware as the earliest they will be aware of it is after the next update – when the manufacturer updates their blacklist or malware database.

Meanwhile, an anti-ransomware solution can stop a ransomware attack by tracking processes or programs by checking if they make symptomatic changes and show any suspicious behaviors or activities.

Then again, even if your antivirus were to detect a malware attack, it still wouldn’t be able to recover the files that had been encrypted by ransomware. Decryption is the forte of anti-ransomware tools.

How serious a threat is it?

As far as ransomware attacks go, 2017 will always be remembered as the year this particular type of malware dominated global cyber-attack headlines. For example: 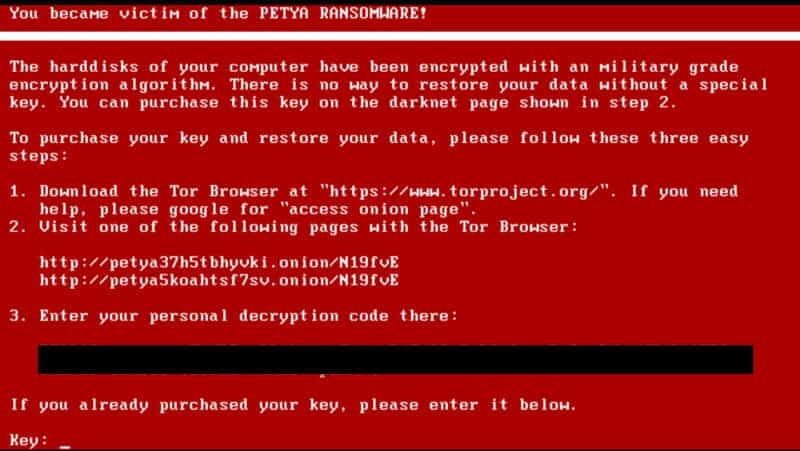 Although the threats had died down by the end of the year, it wasn’t exactly the end of the onslaught. In 2018, the ransomware threat continued and some of the biggest companies on the planet, and even entire cities’ networks, were held ransom:

Things weren’t much better in 2019; in fact, the number of ransomware attacks doubled and, what’s worse, the malware themselves became even more powerful. Some examples:

Sadly, if these recent past years are anything to go by, the future forecast doesn’t look too encouraging. It is anticipated that the attacks will continue to become even more devastating, while the malware grows sneakier as hackers become more clever and target specific industries or victims.

Why should a small business worry about ransomware?

How can a ransomware attack affect your business?

As we have just seen, and apart from the initial loss of data and the crippling of productivity, the fallout from a ransomware attack can continue to affect businesses for a long time after the attack.

Let’s have a look at how:

These are only a few of many ways your business can be hurt by a malware attack. And so, the question now becomes: what are the best ransomware protection solutions to choose from? 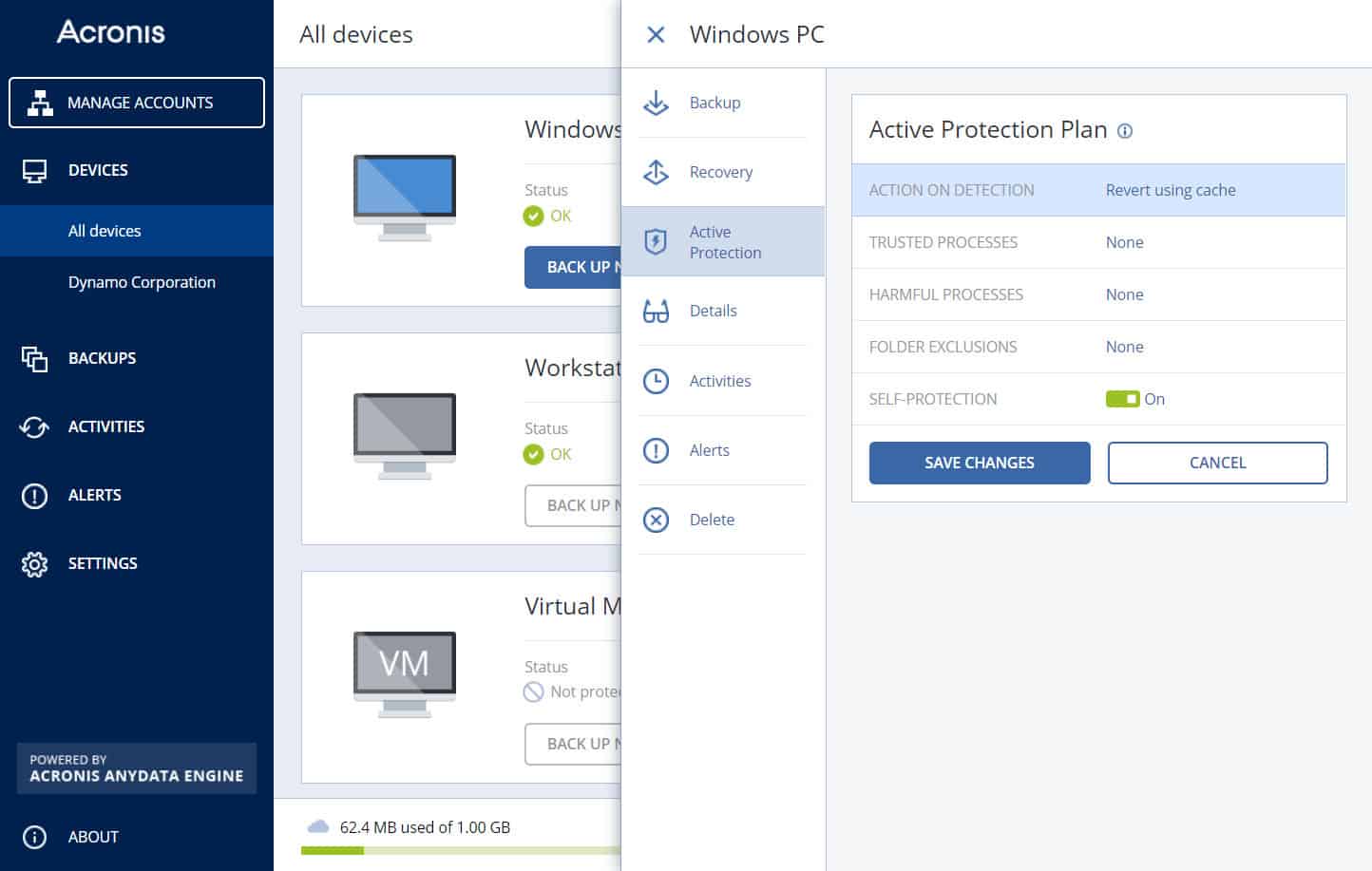 Although it is also offered as part of the more comprehensive Acronis True Image backup utility, the Acronis Ransomware Protection tool is a free, standalone anti-ransomware tool that also has all the features and capabilities. Plus, it comes with 5GB of hosted online backup.

It is in the cloud, where all the important data the user chooses to protect is stored. And, it is this online backup that is used as a restore point in case of a ransomware attack.

Of course, this is in addition to the local cache of backup files – which Acronis Ransomware Protection guards against attacks by denying access to it. Any application or process that doesn’t have the proper authorization is blocked out.

Meanwhile, the tool keeps an eye out for signs of ransomware attacks and uses “whitelisting” of other critical processes to make sure it doesn’t accidentally flag legitimate ones that need to access it. More importantly, this tool ensures its own integrity by blocking any attempts at modifying its own files.

Finally, Acronis Ransomware Protection is an anti-ransomware tool its manufacturer offers for free in the hopes you will like it so much that you will eventually opt for the premium package.

Well, they aren’t too far off the mark – it is an impressive anti-ransomware. 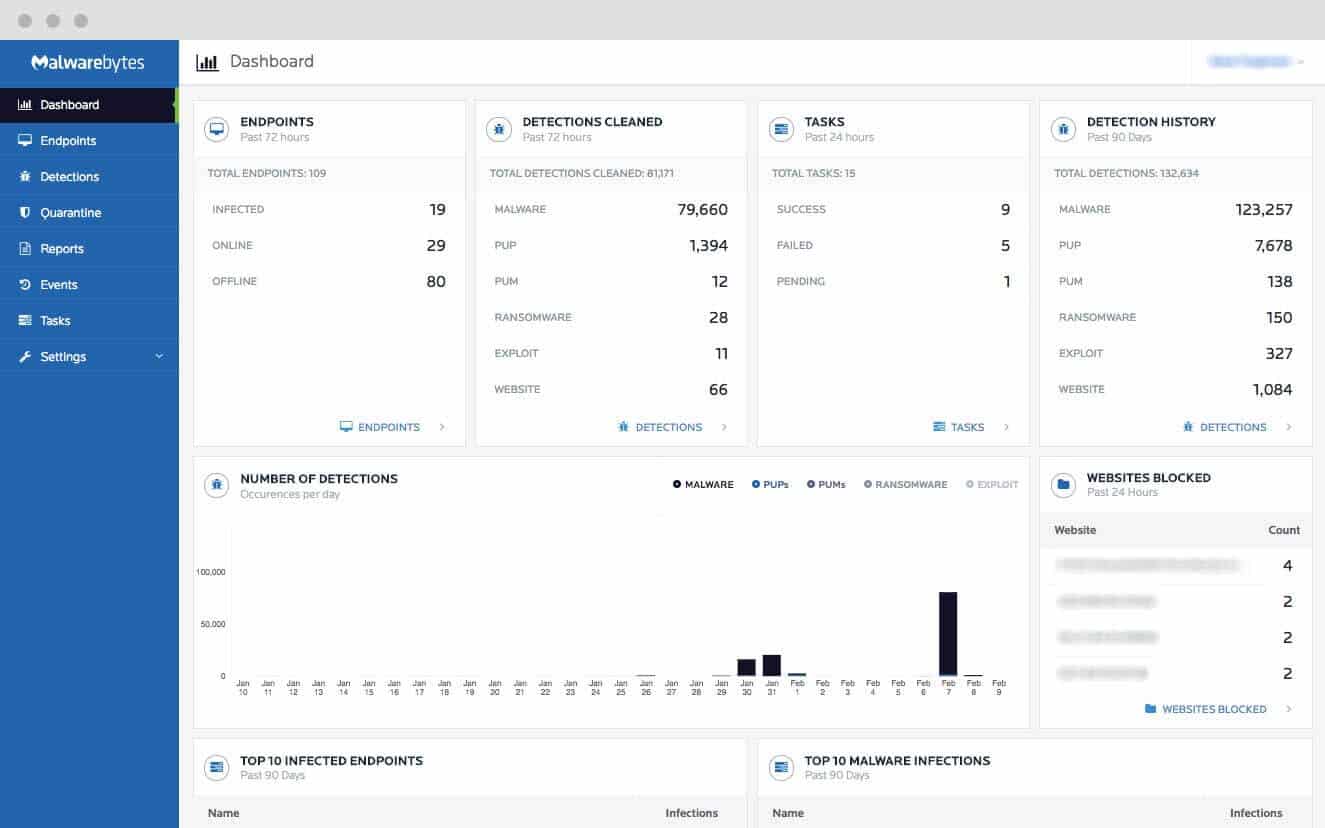 Although it started out in beta mode, this anti-ransomware tool has transformed into one of the best options on the market today. Being a tool created for a specific purpose, it doesn’t eat up processing power and, in fact, has a small digital footprint. Besides, Malwarebytes uses it as part of its bigger, more complete Malwarebytes Endpoint Protection & Response solution. This means, they are sure it is a great tool and have confidence in its performance.

Once installed, it runs in the background without the need for even an initial scan – it simply starts protecting the device and reacts in real-time. The beauty of Malwarebytes is its Ransomware Rollback [PDF] technology. Any changes that were made to files – like being encrypted by a malware – can be reversed. This is done using backups that this anti-malware solution keeps for exactly this purpose.

Malwarebytes keeps an eye on all that is going on around it and keeps tracks of which program or process did what change. When it realizes that something awry has happened it can easily roll back time and reverse any changes that were made regardless if it were a modification, deletion, or even encryption.

Thus, for those who might think that this is a lightweight tool, we can only say, “Do not underestimate it.”

The thing that makes Malwarebytes one of the best anti-malware tools out there is that it was designed to protect against the latest online threats. It, therefore, has the ability to target the most recent malware threats that even some of the other “big league” antimalware solutions haven’t been able to flag yet. 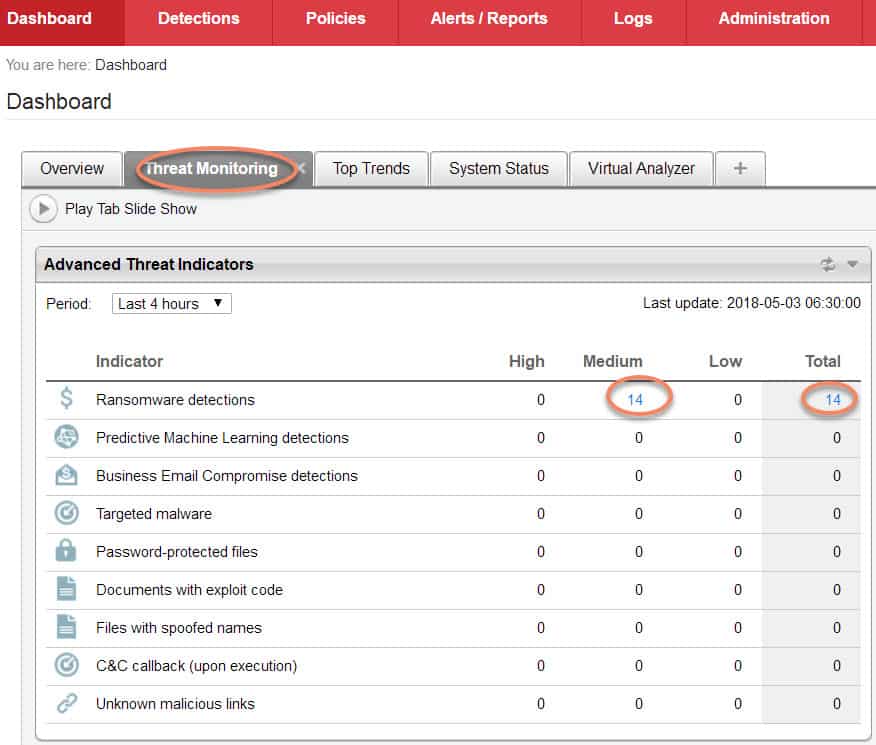 RandomBuster is free, and although it is a featured component of the Trend Micro Antivirus suite, it is also available as a stand–alone program.

This tool addresses the ransomware issue in a somewhat different way – by baiting ransomware malware, fake files are placed in pre-selected strategic locations around a system and are then observed for any malicious behaviors or attack attempts.

Then, there is Folder Shield – a feature that creates two folders where any documents placed inside them are safe from attacks. No program can edit or delete files that are placed in these folders unless specific authorization has been granted to do so. Of course, new files can be created and this ensures their protection from their inception.

This way, instead of checking every process out or keeping track of changes that are made all over a machine, RansomBuster deals with just two folders (and any subfolders under them) to stop programs, processes or services from accessing them unless they are allowed to. Users can simply create a folder and dump all their sensitive data into it.

Finally, one other great thing about this anti-ransomware solution is that the makers – Trend Micro – have a dedicated ransomware hotline page where visitors can find a variety of tools to fight screen-locker ransomware, submit infected files for investigation, and even have data decrypted after having fallen victim to a malware attack. 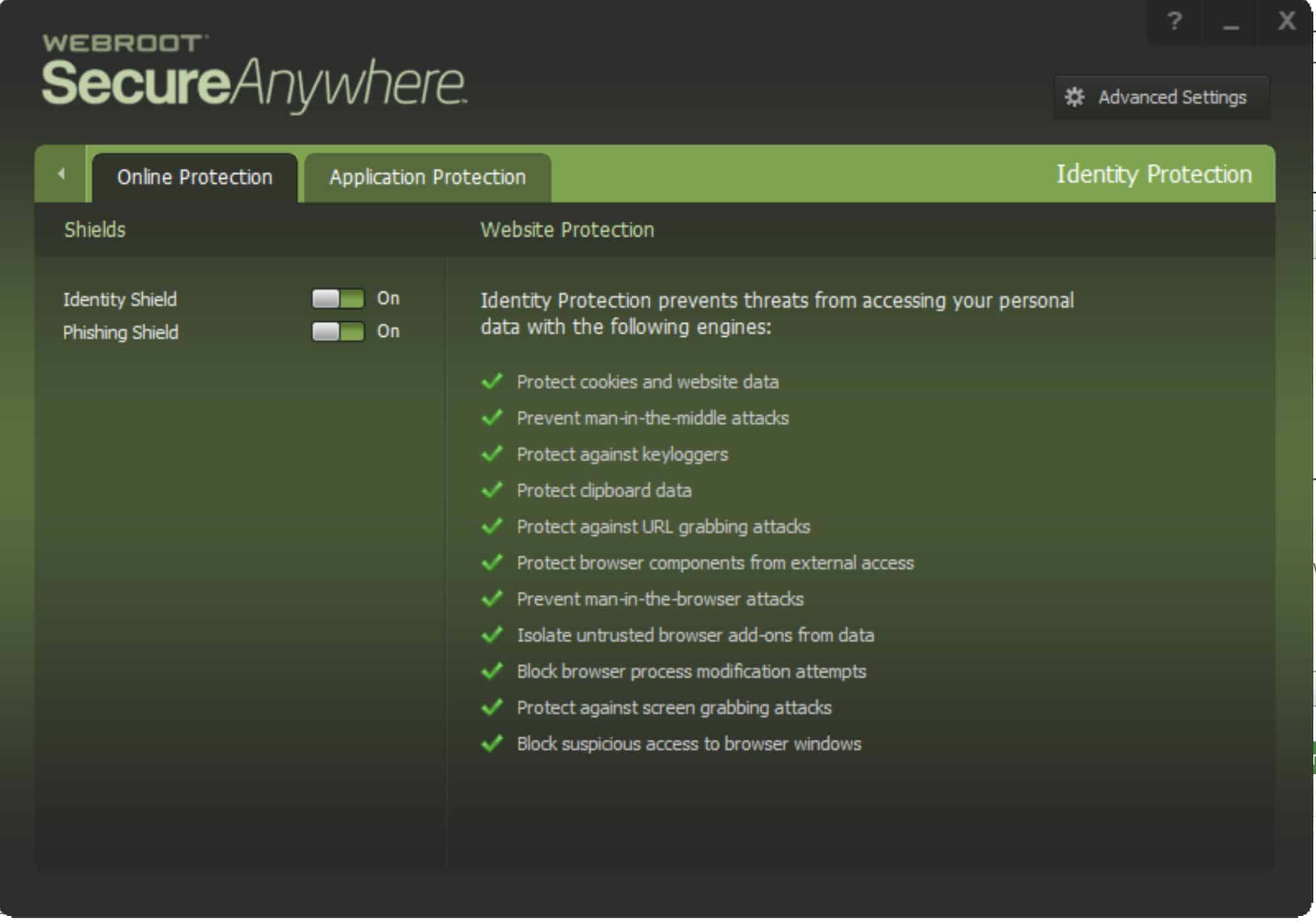 Webroot SecureAnywhere is an antivirus that was created for defense against all types of malware, not just ransomware. And yet, the anti-ransomware feature is so effective we had to include it in this list.

A unique feature of this tool is that it keeps track of all processes – legitimate or otherwise – and ignores or removes them depending on which set they belong to. In case of indecision, the tool keeps a close eye on the program or process until it can make a decision either way.

Being a cloud-based antivirus, Webroot SecureAnywhere is easy on resources to the point that it remains unnoticed as it goes about its task. Another advantage is that cloud processing makes it fast at scanning – even during full scans.

Webroot SecureAnywhere prevents unrecognized processes from connecting online or making irreversible changes and logs everything else they do. All the while, Webroot Central deep-analyzes the processes against a database in the cloud. Should any of them raise a flag, the tool uses its logs to reverse any changes that they may have made, including decrypting any files that were encrypted. 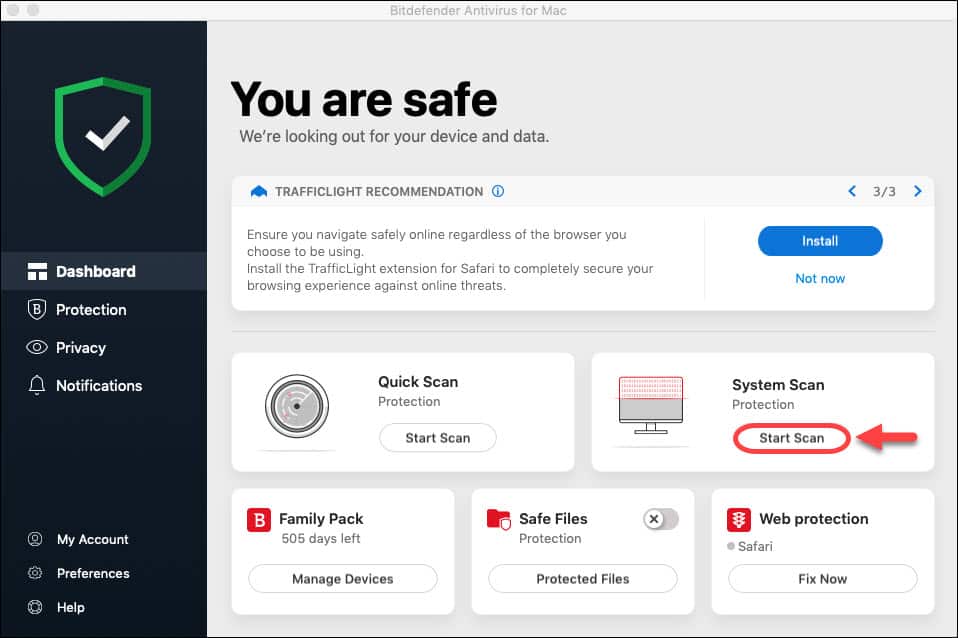 This is, arguably, one of the best anti-ransomware software solutions out there. Again, although Bitdefender Antivirus Plus is a full anti-virus suite, and as a full-fledged defense system, it can keep your network safe from various sorts of attacks, it is the protection against ransomware that is quite remarkable.

This is mainly thanks to Safe Files, a feature that prevents sensitive documents and data storage from being accessed by unauthorized users. Bitdefender also has its own antimalware scan engine and multi-layered anti-ransomware protection.

Apart from fighting ransomware, Bitdefender Antivirus Plus also serves as an anti-phishing and anti-fraud protection tool and has an anti-tracking extension to seek and block web trackers. Are you worried about someone spying on you in the privacy of your office or living room? This suite’s Webcam Protection prevents apps from taking over your camera while Microphone Monitor alerts you when an application tries to access your microphone.

All of this is backed up by features like a password manager, banking protection, VPN, safe online shopping and much more. Surprisingly, although it is a heavy-duty antimalware solution, Bitdefender remains unobtrusive and doesn’t tie-up the resources of the machine it is supposed to be protecting.

Deciding on a ransomware protection tool

If you ask which one we would recommend the most, we would still be split between Bitdefender Antivirus Plus and Webroot SecureAnywhere. We recommend the former for businesses and enterprises while the latter would be ideal for individual or small business users.