How do planes connect to wifi and is it safe?

The availability of the internet on a plane makes long flights less odious. Find out how wifi signals get to airplanes and if there are any safety concerns.
Stephen Cooper 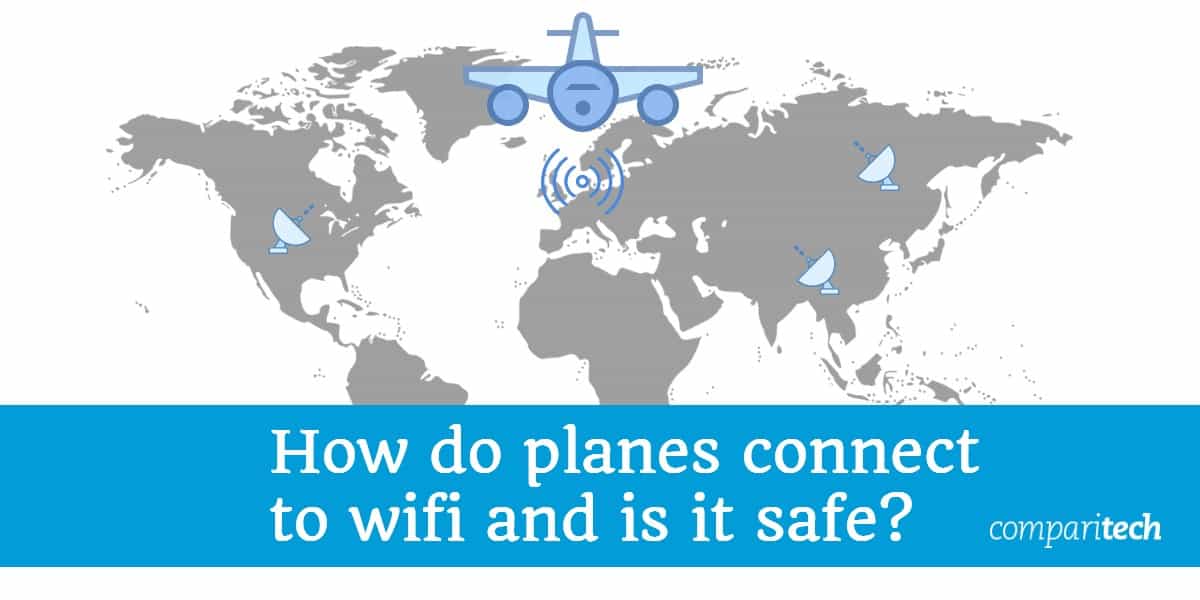 In 2006, Colorado-based Aircell got the exclusive right from the US Federal Communications Commission to use a 3 GHz signal for civil ground to air transmission. This made wifi on planes possible. Since that event, many airlines enable passengers to connect to the internet while on a plane. Some companies make the internet available for free, while others charge. Some make the service available only on certain routes.

Have you ever wondered how the internet connection gets to you up in the air and if it is safe?

There are two different systems for airplane internet connections. While over land, aircraft can communicate with the same wireless antennas that cell phone companies use to provide connections to their regular customer base. As cell phone standards have improved to include speeds fast enough for data connections, the ability to provide wifi to planes became possible. Current cell phone systems that are sufficient to include wifi conform to the 4G LTE standards.

LTE stands for Long-Term Evolution and it is a registered trademark owned by the European Telecommunications Standards Institute (ETSI). Although this is a European system that improves the broadband availability broadcast from cell phone towers, much of the technology that contributed to the standard’s delivery was contributed by Japanese and South Korean companies. Today, the standard is implemented all over the world, not only in Europe.

4G stands for “fourth generation.” This is a statement of requirements that defines an advanced cell phone service and it was created by the International Telecommunication Union (ITU). A certified 4G system is fast enough to carry high-definition mobile TV and faultless IP telephony.

An airplane that includes a wifi service has a transceiver attached on the underside of its fuselage. This piece of equipment can pick up radio waves in the same way as your laptop or smartphone. The transceiver channels that signal through to a router on the inside of the plane and customers who want to use the wifi on the plane just connect to the router in the same way that they would in a café or an airport.

The internet antennas that enable you to connect to the data service of your mobile contract on your phone broadcasts out a signal footprint. You need to be standing within that footprint in order to get a connection. That signal footprint doesn’t just radiate out laterally like a plate. It forms an invisible ball, which means that it also extends up into the sky, where those transceivers on passing planes can pick it up.

Signals don’t have a boundary. Instead, they weaken over distance to the point where they aren’t strong enough to pick up. On the ground, a 4G cell phone base station can broadcast up to a distance of up to 150 kilometers in theory. In practice, cell phone providers place their towers about 2 to 3 km apart in urban areas, up to 50 km in flat rural areas, and up to 8 km apart in hilly terrain. The need to put those towers closer together arises from the presence of obstructions and interference. As there are almost no obstructions above a tower other than clouds, reaching the standard flying height for commercial airlines of 10 to 13 km is easily attainable.

A moving plane won’t stay in touch with a single antenna for very long. However, that doesn’t matter because the protocols for wifi services enable receivers to switch to the next antenna on the route. This is the same technology that keeps your internet connections constant on a mobile device as you travel on a train, on a bus, or in a car.

Despite advancements in increasing the strength of signals from an antenna to make them usable at longer distances, no wifi signal footprint will extend across the oceans. So, airlines have to use a different technology for transoceanic flights that travel far away from any landmass. This system employs satellites.

Satellite-based wifi systems cost a lot more to run than plane wifi systems that pick up terrestrial transmissions. This factor is the main reason why many airline systems impose such high charges for internet use. Many of those airlines that offer free wifi don’t include the service on their long-range planes that are dedicated to oceanic routes.

So, airlines either average out the cost of their internet service, making overland access more expensive than it should be in order to subsidize overseas access, or they don’t bother subscribing to the satellite service, making internet unavailable on long haul flights.

Inmarsat dominates the provision of satellite-based connectivity for planes. The company offers three types of signal.

GX Aviation is the top-of-the line broadband internet service for airlines delivered by satellite. “GX” stands for Global Xpress. This is a network of four satellites that are whole-owned by Inmarsat. The signal that carries these connections is Ka-band. This is a portion of the microwave spectrum.  The Ka-band frequencies lie between 26.5 and 40 gigahertz (GHz).

The GX Aviation network can deliver speeds of up to 50 Mbps. However, Inmarsat throttles the speed according to the budget requirements of each airline, so if you discover your flight is covered by this system, you might not necessarily get that top speed.

GX Aviation delivers internet to flights run by, among others:

SwiftBroadband is the cheaper connectivity option offered by Inmarsat. This system is more widely accessed that GX Aviation, partly because it has been in operation for longer. This system is also supported by four satellites that circle the earth. These are the Inmarsat I-4 family of satellites that communicate with L-band microwave signals. L-band has a frequency range of 1 to 2 GHz and is commonly used for aviation guidance, LTE-based mobile phone networks, and digital audio broadcasting.

The European Aviation Network is a joint project between Inmarsat and Deutsche Telekom. It combines satellite transmission with terrestrial transceivers. This network only launched in 2018, so it is very new and not widely implemented yet. However, it brings high speed internet connections of up to 50 Mbps at a much lower cost than the price of the GX Aviation service.

The European Aviation Network covers 30 countries in Europe, with capacity focused along the most densely served routes on the continent. The satellite connections broadcast in the S-band spectrum, which is a subset of the microwave range and operates in frequencies between 2 and 4 GHz. The ground transmitters for the service are run by Deutsche Telekom and operate to the 4G LTE standard.

Airlines don’t just subscribe to an internet service in every country they fly in – they use specialist services that can make wifi access available all over the world and even blend terrestrial and satellite services.

Typically, airplane connectivity providers contract in connection servers from a host of local internet service providers all over the world to ensure that antennae are located in every place that airlines overfly. This reliance on local services for ground-to-air communications can result in patchy wifi performance.

The first internet service for airlines was created by Gogo, which, at the time, was called Aircell. That company is still one of the major providers. The two biggest rivals to Gogo are OnAir and Panasonic Avionics. OnAir is the official marketing partner of Inmarsat’s airline connectivity service.

Is it safe to connect to wifi on a plane?

You shouldn’t be casual about connecting to a public wifi system just because you are on a plane. The connection transmission outside of the plane has the same security measures as the data signal you get on your smartphone on the ground. The wifi signal within the plane is as secure as the service that you get from any wifi router connection. However, you are at risk whenever you connect to a wifi service in a public place.

Anyone can set up a wifi hotspot. Any smartphone, tablet or laptop can receive signals from other devices without connecting through the router on the premises. A hacker hotspot performs a “man in the middle attack.” The hacker will forward your communications on to the real wifi router on the plane, but the security that protects your communications on to the real hotspot will be controlled by the hacker. This enables him to read all of your data as it passes through his computer.

In order to protect your internet connections on a plane, as with any public wifi hotspot access, you should use a VPN. This service will apply an extra layer of encryption which extends end to end beyond the control of the hacker and it cannot be cracked. You can read more about VPNs in this article.

You also run a legal risk when using wifi on a plane. When traveling over a large body of water, or flying on an airline that only uses satellite connections, then you are safe from local jurisdiction. However, if you access wifi that is carried through terrestrial transmitters, then technically, you need to comply with the law in each of the countries you pass over on your journey.

Each country has different laws about what sites and content is permitted. In theory, a nation’s government could imprison you for accessing forbidden content while in their airspace even if you don’t put a foot on the ground there.  Not being a citizen of those countries you fly over does not make you immune from the law.

An example of this problem lies in the Prevention of Electronic Crimes Bill of Pakistan. This gives the Pakistani government the right to arrest Pakistani passport holders and those who qualify for a Pakistani passport wherever they are. You could end up breaking that law. So, if one of your grandparents was from Pakistan and you want to access YouTube (which is banned in Pakistan) on a flight from Cairo to Bangkok, you would be advised to check with the flight map exactly where you are before you hit the ENTER key.

There are many sites and categories of web services that are banned in many of the countries that you fly over. The fact that those sites are legal in your home country is no defense from arrest. The authorities won’t force your plane down to arrest you for these violations, but if you happen to give some details of your identity in the same connection, then you could be tried in absentia and arrested at some point in the future when you finally do visit that country.

Those VPNs that will protect you from hackers will also protect you from snoopers and government spooks because they make it impossible for anyone who intercepts your communications from reading their contents, thanks to encryption.

Internet access on planes is only going to get better and more widespread. Make sure that you keep your connections private as technology makes more access to more complicated content possible.

Do you regularly use wifi on planes? Do you use a VPN whenever you are on a flight with wifi access? Do you think that all airlines should offer free wifi? Leave a message in the Comments section below and share your experience with the community.