Malware statistics and facts for 2020

Malware is still a major problem worldwide, but the nature of malware is changing. Here are some of the biggest insights into how malware is evolving in 2020.
Sam Cook Data journalist, privacy advocate and cord-cutting expert 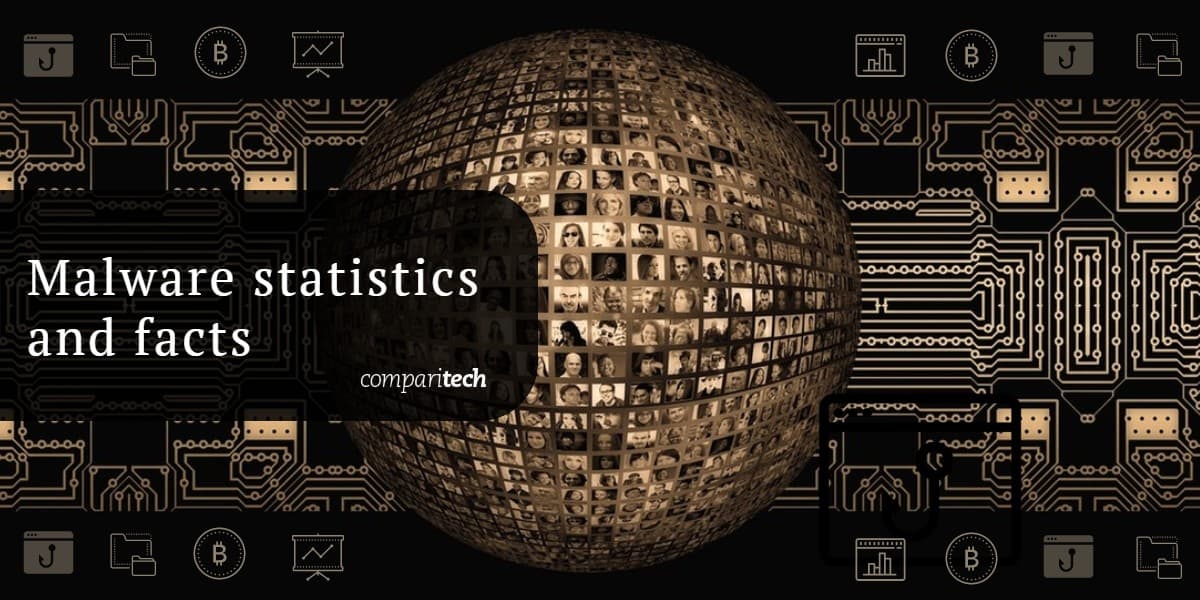 “Malware” describes any malicious program created to wreak havoc or mischief on a computer system. It’s also an ever-evolving ecosystem thanks to the constant push-and-pull between security professionals and cybercriminals. Shifts in the malware environment change every year, although long-term trends are identifiable in year-over-year data reports.

Despite numerous anti-malware measures, cybercriminals and hackers aren’t ones to give up easily, especially not as long as there’s money to be made in malware. Even still, some traditionally-popular forms of malware appear to be losing favor in 2020 as hackers and cybercriminals change their tactics to attack new or underutilized vulnerabilities.

Signs currently point to hackers shifting their focus more toward discrete infections through IoT and email, with a continued focus on enterprise businesses and governments versus average web users, especially when it comes to ransomware infections.

Here’s a rundown of the most interesting malware statistics:

In 2018, 64% of organizations experienced malware activity that spread from one employee to another. In 2019, that number jumped to 71%. The increase in employee-to-employee spreading of malware could be one of any number of reasons, including more subtle attack methods by malware designers, or lack of training to recognize infections.

In its 2019 State of Email Security Report, Mimecast found that 53% of organizations experienced a ransomware attack that led to at least a partial disruption of business operations. The previous year, only 27% of organizations reported experiencing these types of malware attacks.

3. Organizations in the UAE report the largest number of ransomware attacks, followed closely by those in the US

Interestingly, only 39% of UK businesses report being impacted by ransomware.

4. Over 60% of organizations may have understaffed cybersecurity teams

In its 2020 State of Cybersecurity report, ISACA found that 62% of cybersecurity professionals believe their organization’s cybersecurity team is understaffed. Understaffing among organizations, including business and government, could create a strain on existing staff and lead to an increased risk from malware threats.

The demand for workers is also increasing year-over-year. From C-suite executives to technical and contributors, jobs across the cybersecurity industry continue to go unfilled at demand outpaces the growth in the number of workers with the requisite skills.

5. Some types of malware are on the decline

A collection of recent data and research points to a change in how consumers and businesses experience and receive malware. Enterprise security professionals reported a 7 percent decline in malware attacks in 2018 (31 percent of all attacks identified) in ISACA’s 2019 State of Cybersecurity survey.

The number of websites serving up malware is at its lowest point since 2007, according to Google’s Transparency Report. Instead, consumers are increasingly dealing with phishing websites that seek to glean passwords, credit card numbers, Social Security Numbers and other private information directly from visitors without requiring any direct malware downloads.

Google’s data shows the number of malware sites detected per week continues to fall every year. As of March 2020, Google detected around 600-800 malware-infected sites per week. By contrast, Google was detecting 3000+ malware sites weekly between January and March of 2019, and between 5000-7000+ during that same time period in 2018.

Phishing sites are typically designed to look like the official version of other websites. PayPal is a commonly-mimicked site, for example, as gaining access to users’ PayPal credentials can be distinctly profitable for hackers. Banking and social media sites are also fairly common targets.

According to Google’s Transparency Report, 1.4 million websites made its list of “Sites Deemed Dangerous by Safe Browsing” category, as of February 24, 2019. The vast majority of those (over 1.3 million) were phishing sites. Only 51,000 of Google’s removed sites were delisted because of malware. That’s more than a 2,500 percent difference in favor of phishing sites, which have seen a year-over-year increase of over 85 percent.

Google’s Safe Browsing tool automatically scans websites across the world to help detect which sites are infected with Malware. As of April 2020, China was the worst off with 3% of scanned sites hosting malware. Fewer than 1% of scanned sites in the US, UK, Russia, Germany, and Spain were found to contain malware.

10. The number of malware attacks declined for the first time since 2016

The number of new malware attacks declined for the first time since 2015. According to SonicWall’s 2020 Cyber Threat Report, the company detected 9.9 million malware attacks in 2019, compared to 10.5 million in 2018.

Domain Generation Algorithms, or DGAs, allow malware architects to automatically generate a large number of domain names which then serve as rendevous points to help control and collect data from the active malware infections. DGAs make investigation and analysis efforts difficult, which in turn makes it difficult to shut down botnets.

Over 40 malware families employ DGAs, including well-known malware including CCleaner, Emotet, and Mirai. SonicWall identified over 172 million randomly-generated domains in 2019.

Sonic Wall’s 2020 report found that attacks on the tens of thousands of non-standard ports available increased to 19% of all attacks in Q2 2019, only to fall down to 11% by Q4 2019. The vast majority of attacks still (and likely will remain) a problem for standard ports, such as HTTP (port 80).

14. Malware and ransomware attacks down, but IoT malware is up

Still, there were 9.9 billion malware attacks as a whole, with 34.3 million coming against IoT devices.

16. PDFs and Microsoft Office files were used in nearly 38% of new malware detections

Their ubiquity across devices makes PDFs and Office files, such as Word and Excel documents, extremely popular as payload mechanisms for malware authors. SonicWall found over 20% of “never-before-seen” malware files were couched in Office files. Over 17% were carried in PDF files.

17. As cryptocurrencies rebounded, so did cryptojacking

The recovery of cryptocurrency values in the first half of 2019 was marred by a substantial rise in cryptojacking hits, which primarily come through malware.

The chaotic ups and downs in cryptojacking activity highlight just how much cybercriminals respond to market demands. Malware has always been about achieving the best possible outcome (stolen information and money) with the least amount of effort. An increase in the use of website malware blocking technologies is why phishing sites are far more popular, but cryptojacking also makes for an easy money-making venture for cybercriminals who, for all intents and purposes, follow the same principle as Wall Street brokers: “buy low, sell high”.

Although the Coinhive cryptocurrency mining service was legitimate, it was quickly co-opted by cybercriminals who installed it surreptitiously onto websites to collect cryptocurrency revenue.

Originally launched in 2017, Coinhive voluntarily shut down in March 2019. SonicWall found that after the Coinhive shutdown, cryptojacking hits on its cybersecurity monitoring network fell by 78%.

Notably, Cerber is part of what’s known as “Ransomware as a Service” or RaaS. Cybercriminals can hire others to launch attacks using the Cerber malware, and receive around 40 percent of the paid ransom. In 2017, SophosLabs investigated 5 RaaS kits and found that some can be extremely inexpensive (less than $40), while others can exceed several hundred dollars to purchase and employ. However, they’re highly customizable, and hackers appear to operate their ransomware services with a surprising degree of professionalism.

20. The Cerber ransomware family accounted for 33% of all ransomware attacks in 2019

There were over 189 million ransomware signatures detected in 2019. Of that, 77 million were part of the Cerber family. The many different Cerber ransomware variants were responsible for 33% of ransomware attacks last year.

A growing number of threat actors are sending malware attacks over encrypted SSL/TSL traffic. Encrypted channels make detection and mitigation more difficult, resulting in higher success rates for the malware packages in question. SonicWall detected 3.7 million malware attacks of this nature in 2019, which marked a 27% increase compared to 2018.

Symantec also recorded a strong decline in malware. The security company found a 63 percent year-over-year decrease in new malware variants between 2017 and 2018. For its part, WatchGuard reported that zero-day malware accounted for 36 percent of all malware blocked in Q1 2019, almost no change year-over-year from 2017.

23. “Formjacking” is a growing problem for websites

Symantec also noticed a stark rise in what’s known as “formjacking”, which BrightTALK calls the “breakthrough threat of 2019”. Formjacking occurs when hackers insert malicious Javascript into a website’s code that allows it to “skim” financial information from payment forms. Security researchers currently compare it to ATM skimmers, which attach to the card reader on ATM machines to skim the information from a credit card’s magnetic strip.

Symantec identified an average of 4,800 websites compromised with formjacking code each month in 2018. The security company also blocked 3.7 million formjacking attacks that year, highlighting the growing threat. There’s little data related to formjacking to draw upon prior to 2018, which helps indicate the rapid growth of this malware attack vector.

Overall, it appears cybercriminals have massively switched their tactics from trying to get web users to download malware directly from infected web pages and instead now prefer alternative malware delivery methods. Even formjacking, which is in effect a type of malware, doesn’t require the user to download a file. Hackers appear to now prefer more discrete methods.

24. The City of Baltimore suffered a major ransomware attack

In May 2019, news reports rolled in covering the Baltimore City government’s painstaking (and embarrassing) efforts to recover from a major ransomware infection. It took Baltimore City’s government 36 days to loosen hackers’ grip on its data, and even longer to fully recover all of the systems that were locked down. The city spent over $18 million recovering from the attack.

Although—to our knowledge—Baltimore did not pay a dime of that money to the hackers who held the city’s files hostage, many ransomware victims do choose to pay instead of eating such high costs associated with recovery.

As with most malware, ransomware isn’t a guaranteed income source for cybercriminals, but it’s far more successful than most traditional malware attempts. As a result, some ransomware avenues are still on the rise in 2019, even as security companies develop more effective mitigation methods and tools.

25. Enterprises are the main target for ransomware

Symantec noted a 12 percent increase in enterprise ransomware in 2018, for example, although it also recorded a 20 percent decline in ransomware overall that year. The company also identified a 33 percent rise in mobile ransomware, which highlights a new trend of criminals targeting mobile users with file-encrypting malware.

26. The “Cerber” ransomware family is leading the rise in ransomware attacks

Other reports show as little as a 15 percent increase in ransomware attacks in the first half of 2019, and up to a 105 percent year-over-year increase with the Cerber family of ransomware identified as the largest group. SonicWall also noted nearly 40 million Cerber hits in the first half of 2019. Comparatively, the volume of Cerber-family ransomware hits soared to over 101 million in 2018. The next closest ransomware family in 2018, BadRabbit, had fewer than 8 million hits the whole year. 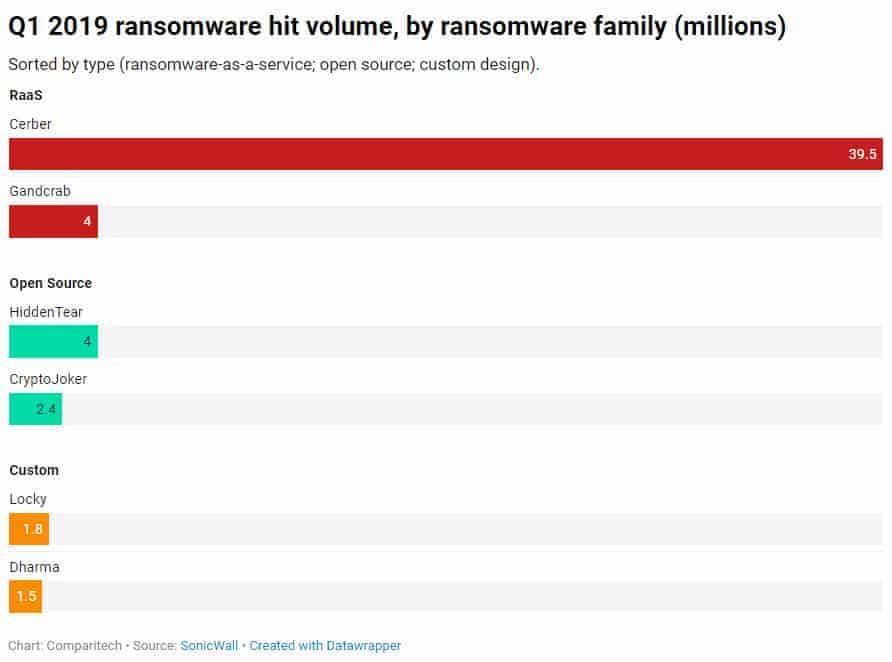 One of the biggest reasons hackers appear to prefer ransomware versus more traditional viruses and malware is because of the payoff. Ransomware payments are now totaling around $1 billion per year, making them far more lucrative than traditional malware operations. Ransomware is so financially-viable, in fact, that hackers have upped the amounts they’re asking for in ransom payments. According to Beazley, the criminals’ asking price for ransomware removal increased 93 percent in Q1 2019.

Based on what we’ve seen so far in 2019, we can expect to see a few key takeaways for the remainder of the year and into 2020:

There’s no telling what new threats may emerge, and how the malware landscape may shift. As major security companies have reported in the past, a fair amount of activity tends to increase in Q4 in most years, which is often associated with the holiday shopping season.

As ever, hackers tend to be reactive instead of proactive, going for low hanging fruit whenever possible, or easily-exploited vulnerabilities in systems where they can be found. Their tactics tend to change only when their efforts become unprofitable.

It’s also hard to ignore the ever-present danger posed by state-sponsored malware attacks, which are rarely profit-driven and tend to be politically-motivated. Such attacks will likely increase into 2019 and 2020, with all eyes on China, Russia, and North Korea, and a keen focus toward the US as the 2020 election season rolls in.