Norton vs Kaspersky: Which is best?

We discover the strengths and weaknesses of Norton and Kaspersky's program and compare them against one another. Find out which program offers the best all-round protection.
Steve Adams 15+ years experience in the tech, privacy and security space 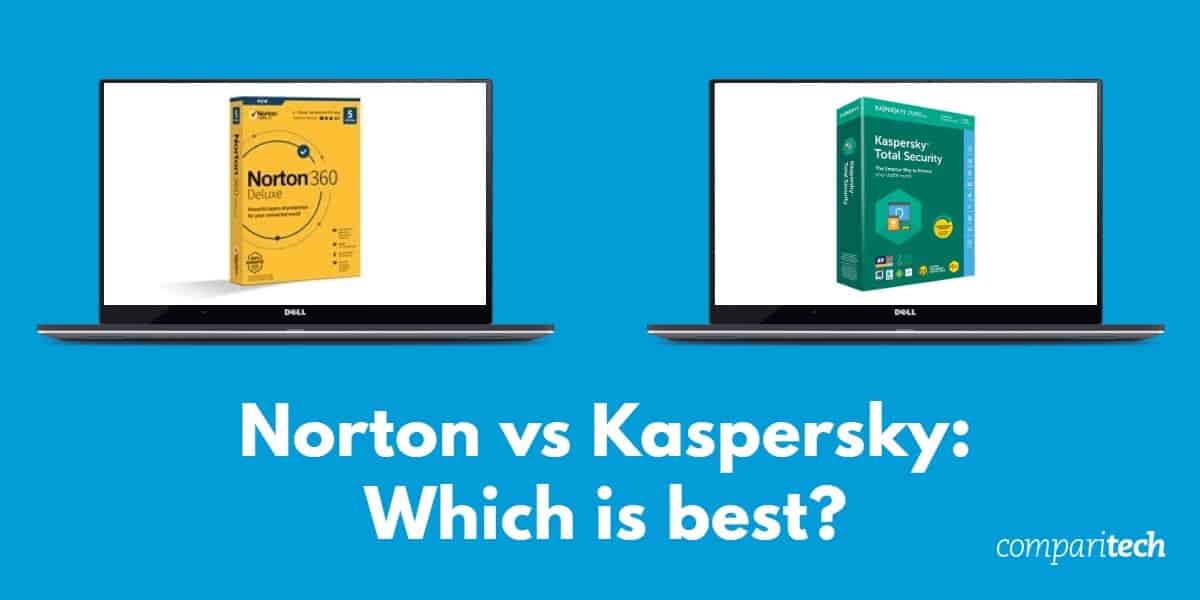 Norton and Kaspersky are popular brands of antivirus, well known amongst security enthusiasts and consumers. Both providers offer antivirus software using the latest malware detection techniques and secure millions of user devices across the globe.

Despite being so popular, Kaspersky also comes with a little controversy due to links to the Russian government.

In this comparison, I want to find out the answer to a simple question, which antivirus is better?

Let’s put each software up against one another and see which comes out on top in terms of performance, additional features, and overall cost.

For this comparison, I will use both my own in-house malware detection tests and find out which one offers my PC the best possible protection. I will also take a quick look at some independent research from the top antivirus labs running independent tests and consider other important aspects, including performance and the impact of scans on the speed of the PC.

If you don’t have enough time to read the full comparison, here is the quick version: Norton is my choice in this comparison, due to superior malware detection rates, good value for money, and useful additional features including a password manager and parental controls.

Here’s what I found out about Norton vs Kaspersky:

Norton is well known and a global leader in the antivirus program world and has been around for 28 years. Since 2001, it has been produced by Symantec Corporation in California. Norton helps secure the devices and online privacy of nearly 50 million consumers.

Kaspersky was founded in Russia in 1997 and currently operates in 200 countries. They protect over 400 million users and help 250,000 corporate clients with cybersecurity. The company’s portfolio is impressive and includes leading endpoint protection and services to fight the most sophisticated and evolving digital threats. However, Kaspersky is controversial, as some privacy enthusiasts are wary due to the alleged links with the Russian government.

Kaspersky offers a free security cloud program. As expected, it offers very basic features and only gives you core protection against common viruses and suspicious websites. The next tier offers you, again, basic software, but with the added feature of not slowing your computer down while protecting it. Next, Kaspersky Internet Security features webcam protection and an encrypted browser for when you bank online. Kaspersky Total Protection features all of the above, but with parental controls, a password manager, and file backup. Finally, the new Security Cloud program includes antivirus, anti-ransomware, mobile security, VPN, parental controls, and privacy tools.

Norton offers no free antivirus plan and prices start at $79.99 per year. This basic plan includes anti-spyware, malware and ransomware protection with a password manager, 10GB Cloud Backup, secure VPN and safecam. The next tier up with Norton Deluxe provides everything the standard one has, but with an added 50GB of cloud backup, protection for up to five devices, and parental controls. You can also add on LifeLock, an identity theft protection service.

Both Norton and Kaspersky discount your first year of subscription. Norton 360 Deluxe software is $50 off for the first year, cutting the price to $49.99, at the time of writing. Similarly, Kaspersky offers a hefty discount off its Total Security software, also coming in at $49.99.

In terms of price, Norton and Kaspersky are about even. Later in this comparison, I’ll delve into what they both have to offer consumers.

Protecting your PC against malware is a key factor in deciding which antivirus program is best. To see how each product performed, I conducted a number of tests.

The first test I performed checked for malware threats in real-time, instead of waiting for a scheduled scan. For the second test, I downloaded sample malware files from The European Institute for Computer Antivirus Research (EICAR). I turned off real-time detection and ran a full system scan and a quick scan to see how well the malware was detected and quarantined. The results are in the table below:

Kaspersky successfully identified all EICAR samples, and all were blocked. In comparison, Norton only blocked one EICAR sample and allowed the rest.

For the live samples, Kaspersky immediately deleted them after being unlocked and zipped. Norton blocked all live samples.

To further the comparison, I took a look at the latest available real-time malware protection test results from AV-Test online. In this test, Norton scored 100% in March 2020, however, in April 2020 it scored 99.5%. Similarly, in March Kaspersky received a 100% score for the protection of malware attacks, and in April scored 99%.

I also looked at AV-Comparatives latest Malware Protection test. In September 2019 both Kaspersky and Norton received a score of 99.9%.

AV Comparatives also runs a false alarm test, which checks how accurately a file or app is identified as safe or as a threat. The test results from September 2019 shows Norton picking up seven false alarms, which can be irritating for the user. Kaspersky did not pick up any false alarms with a score of zero.

In terms of protection against malware, there is not much difference in both programs, though Norton scored higher in the April test. Kaspersky edged Norton out when it comes to false alarms.

Antivirus programs can have a big impact on your PC performance so it is important to think carefully about your choice of software. To find out what effects both programs had on my PC performance, I captured some data while running a full scan and a quick scan.

Kaspersky took 227 minutes to complete a full scan, in comparison to Norton’s quick 121 minutes. However, Kaspersky scanned many more items compared to Norton. In terms of the quick scan, Norton was again quicker at 171 seconds and Kaspersky at 273 seconds.

I also recorded some data to see how my PC’s resources were affected by both antivirus programs while scans ran in the background.

Kaspersky had slightly more impact on CPU utilization when there was no scan taking place (46%), compared to Norton which was just 14%. The other tests all produced similar results for both programs. I then wanted to look at results from other independent tests to see if they had similar results. The tests run by independent labs show how each antivirus impacts PC performance during eight common tasks:

Each task is given a rating ranging between very fast and slow. In the AV-Comparatives Performance Test from October 2019, Kaspersky came out with a very fast score for all common tasks. Norton received a rating of fast for archiving/unarchiving, installing and uninstalling applications and launching applications on its first run.

When it comes to performance, Norton had a lighter impact on my PC. While Kaspersky is not a sluggish program and scored well in the independent performance tests, I give this round to Norton.

It’s not just about price and performance when deciding which antivirus software to buy. It’s also about the extra features that come in addition to the antivirus scanner itself. I’ve looked at what is included in each program to see what they both have to offer:

To help you further, I’ve picked out a few of the best additional features from each provider below and added a brief explanation of what they can do to enhance your online security.

Parental Control- If children use your devices, Norton’s parental control can manage your kids’ activities online.

Secure VPN – The secure VPN allows you to browse anonymously and securely. You can add bank-grade encryption to help keep your information such as bank details safe.

PC Safe Cam – Most PC’s come with a built-in webcam, so it’s important to feel protected. Norton provides a Safe Cam, meaning you will get notified if cybercriminals try to use it.

Privacy – Stops webcam hijacks and hides browsing activity on PC and Mac. Overall both security suites have some nice bonus features, but the VPN is only available with Norton. From my experience, a VPN offers a great deal of value to the average user in protecting their identity and safety online.

Norton wins the battle for the best-added features with the VPN the extra feature that would be of most use to the average user, to enhance their security and privacy online.

The sign-up and installation for both programs is simple. Norton clearly lays out their discount and renewal price for the following year. There is also an added option for Norton Computer Tune Up, which means you will have access to Norton-certified technicians who help make your PC or Mac run like new again.

Similarly to Norton, Kaspersky makes it very easy to sign up. On clicking Buy Now, you are greeted with a pop-up window to upgrade to more devices. The next page is laid out simply, with an option to add on Kaspersky Expert Installation. The auto-renewal is automatically set to on, so if you do not wish to renew the following year, I suggest turning this off.

Whether you’re super technical or a novice when it comes to technology, the useability of any software is worth considering. Kaspersky’s home screen displays a green check to let you know that everything is running accordingly. Common tools such as scan, database update, safe money, privacy protection, password manager, backup and restore, and parental control are laid out in tiles. This makes it really easy to navigate to the right section. The design is fairly simple, with a light grey and green. Although not too appealing, it does the job. 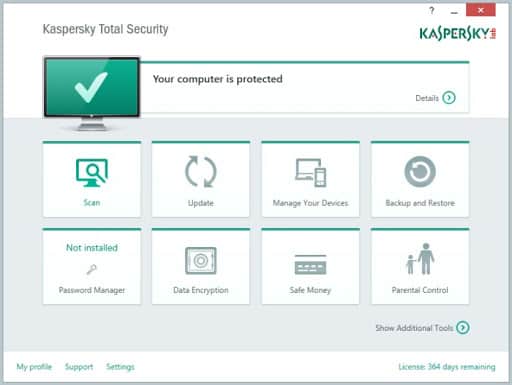 Norton has its signature yellow color scheme. The dashboard ensures easy functionality and clearly shows if you are protected. From the dashboard, you can access security, identity, performance and more. Norton 360 Deluxe also includes a web portal where you can manage the protection for your five devices from a web browser.

Norton offers 24/7/365 support on all of its product tiers. An online community forum, FAQ, live chat support, and support through Facebook and Twitter are all available. Kaspersky technicians are available to call between the hours of 7 am and 1 am, seven days a week. You can also get customer support by email or online chat. Extensive videos, FAQs, and other useful information are found on its website.

In conclusion, both Norton and Kaspersky are great contenders for the ideal antivirus software. However, while Kaspersky offers very useful additional features such as encrypted browsers and file protection, Norton gives you access to a secure VPN.

Norton’s performance scores have the edge on Kaspersky and factoring in the potential links to the Russian government, I choose Norton as the winner.